Khaitan Chemicals & Fertilizers Ltd. is India’s largest manufacturer of SSP fertilizers . It also manufacturers & sells Sulphuric acid which is a raw material for its fertilizer production. It operates six plants located mostly in Central India in the states of MP, UP, Chattisgarh, Rajasthan & Gujarat.

The Co. had a decent year 2019-20 with Sales at 437 Crs, a YOY growth of 17% with PAT of 15 Crs, a YOY growth of over 90%. Dividend has been increased from 5% to 20% . The good performance has continued in the current year as the fertilizer sector is relatively less impacted by Covid-19 since the movement & production of fertilizers have not been restricted by the Govt. Q1 Sales & PAT have come in at 129 Crs. & 6.98 Crs, showing a huge improvement over Q1 of last year at 106 Crs. & 2.35 Crs, a growth of 21% & 197% respectively. There are plenty of tail winds going for the Co. The current monsoons have being better than the 10 year average for the second year running. Besides, lower raw materials have helped improve the operating margins as can be seen in the data pertaining to the last five qtrs below. At the current run rate, the Co. could easily do Sales of about 500-550 Crs . in the current year, with PAT in the range of 30-35 Crs . The current market cap is only about 170 Crs . & looks attractively valued. The promoter holding is the maximum permissible 75% .

So what has brought about this change in fortune for the Co. & is it sustainable? The primary reason for the continued improvement in performance is due to the change in Govt policy in the distribution of subsidy. It has now kept the subsidy for the SSP sector separately within the overall Phosphates & Potassium segment. This has led to faster disbursement of subsidy & improved liquidity & made a material difference to the working of the SSP fertilizer companies.

The Govt. has further initiated the process of Direct Benefit Transfer , linked to Aadhar for payment of subsidy directly into the farmers accounts. This process should be completed sooner rather than later as is being done for various other Govt. subsidies. As & when that happens, it would be a watershed moment for the fertilizer sector as it would mean that these companies would get the full value of goods sold directly from the consumer & not wait for subsidy from the Govt. It could potentially re-rate the entire sector. The subsidy would be a matter between the Govt. & the consumer. The farmer will know the true value of what he is buying. The subsidy bill too would come down meaningfully as currently there is no incentive for manufacturers to produce efficiently & modernize their plants.

The combined production capacity of the Co. is about 11.13 Lakh MT. The production in 2019-20 has been to the tune of 4.36 lakh MT. The current capacity utilization is less than 50% leaving plenty of scope for growth with very limited future capex, if at all. The promoter Mr. Shailesh Khaitan has been judiciously building capacities over the last several years by taking over sick units & turning them around! Being the youngest of the Khaitan brothers from the family that owns Radico Khaitan , he understands the dynamics of wealth creation. The Co.’s recent decision to list on NSE could be a step in that direction.

Concerns : Fertilizers at the end of day is a commodity even though all manufacturers promote their brands. Another concern is the dependence of the sector on the vagaries of the monsoons, though for the present, agriculture is amongst the very few sectors of the economy that are doing well & is unaffected by Covid-19

From 2011 to 2013, company was generating revenue of around 450 cr which was reducing thereafter and again coming back to same level…

On prima facie, It seems like a cyclical one without moat and hence should be considered like a commodity company

How management is turning around running plants? Any details will help to understand the story better…

The reason why this company has very low PE could be mostly because of the pledging.
Promoters have pledged 55% of the holding, company also have a high deb to equity of 0.91.

Although the trend tells more about where the company is headed & the managements willingness to reduce these risks.

Could someone pitch in as to whats changed for the company

The shares pledged by the Promoters have been against the term loans availed by the Co. & not against any loans taken in personal capacity. Most of these term loans will be repaid by March 2021 & the pledge will be released.

The nature of fertilizer business is such that so long as Co.'s receive subsidy from the Govt. there will always be short term debt due to the time taken for the Govt. to release the Subsidy. The Balance Sheets of these Co.'s will undergo a dramatic change after DBT is put in place.

Please refer to page 47 of the Annual Report.

what about management quality and track record ?

The ratings have been upgraded both for long term as well as short term debt. The upgrade is mainly on account of improved financial ratios of the Co. along with factors like established brand names like Khaitan SSP & Utsav SSP, a large customer base being catered to through the six manufacturing plants spread across five states in central India & the long track record of over three decades of the promoters.

In short, the credit rating agency is acknowledging that the fortunes of the Co. are changing for the better. The Co. is in fact looking to aggressively reduce debt, while totally repaying any long term debt by March 2021.

Meanwhile, the Co. is on track to do Sales of about 550 Crs in the current year with Profits to the tune of 35-40 Crs. This along with a leaner balance sheet as a result of reduced debt levels could potentially see the stock getting re-rated. It is common knowledge that with a good monsoon behind us the entire agri sector is seeing better times. It is also amongst the very few sectors relatively unaffected by Covid-19.

Khaitan Chemicals & Fertilizers Ltd. is being listed on the NSE from tomorrow.

Khaitan Chemicals to consider interim dividend, along with the Q2 results on November 2nd. With a good monsoon behind us, the mgt. is clearly bullish about the year. The mgt. looking to reward the minority shareholders in the middle of the year is a pleasant surprise.

Let us hope that other sleeping mgts. wake up, take notice & pick up this good habit!

Khaitan chem chart is a classical flag breakout as shown in the encircled area of the attached weekly chart. The flagpole extends from 7 to 20. Which gives it a height of Rs 13. Breakout point was 19. Technically target comes to around 32. Stock has been showing immense strength in a weakish market and closed strong for the week at 23.8. disc: trading position based on techno funda picture. thanks rajeev for bringing this to the forum.

Khaitan chem has come out with good results for q2 fy 21.

Yes Hitesh, great set of Q2 numbers. Some highlights from my perspective:

As the title of this thread suggests - Achhe Din In Store!

Hello Rajeev ji!
Any idea if the company is planning to expand their current portfolio or enter into new products or markets ultimately utilising such vast capacity that they have?

I am going through coromondel presentation , they claim there are the largest producer of SSP and also they sell NPK as well (where as Khaitan imports NPK and sells in local market ). Please share your thoughts.

Also I found this good one on FasS ( https://www.bain.com/contentassets/cb61f701eb1b4923bb41a8a70f04a290/report_indian_farmings_next_big_moment_-_farming_as_a_service.pdf

If Coromondel says they are the largest producer of SSP, then they probably are. The important factor however is that the industry as a whole is in a sweet spot. Your link on FaaS is very useful indeed & can be a game changer going forward. I think its time has come. We are so far behind in terms of productivity, that private capital can make a material difference to both increasing output & reducing wastage.

There are certain structural reforms in the pipeline like Direct Benefit Transfer which will alter the fertilizer landscape in the country, but if Private Capital can be gainfully deployed, it would have a huge impact on the agricultural sector.

Meanwhile, the December Qtr results are due on February 2nd. I see no reason why they should not be good. The stock has done well over the last 3-6 months & should continue to do so, given the sector tailwinds.

Attaching a link to an interesting article on DBT (Direct Benefit Transfer) of fertilizer subsidy into the bank accounts of the farmers. It appeared in the Financial Express on January 20. The same has been put up by @enelay on another thread. Re-posting it here due to its relevance to this thread. As mentioned earlier, the DBT when it comes through has the potential to re-rate the sector as a whole.

DBT scheme for fertiliser subsidy may be rolled out in FY22

The department of fertilisers and the ministry of agriculture are working out the details of the DBT scheme, which may be announced in the Budget for FY22, sources told FE.

@RajeevJ would like to hear from you, I know this is a pure commodity business just wanted understand what can be expected in future.

Is it fair to assume the company will pay off the long term debt by March 21 ? (I picked the screen shot from ratings report posted by you ) 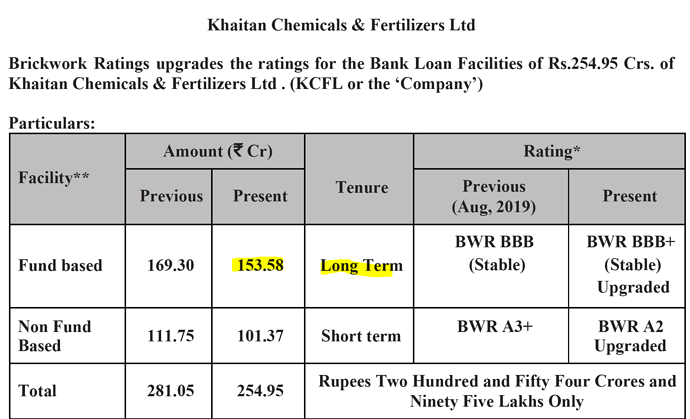 Maybe… just Maybe, the government subsidy has already been paid, and it is just a matter of time for debt to be paid. Having said that, DBT will still be the real gamechanger, rather than waiting for subsidy to be paid every year. 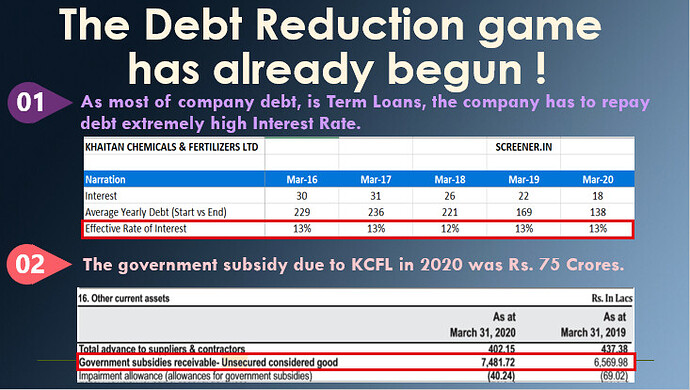 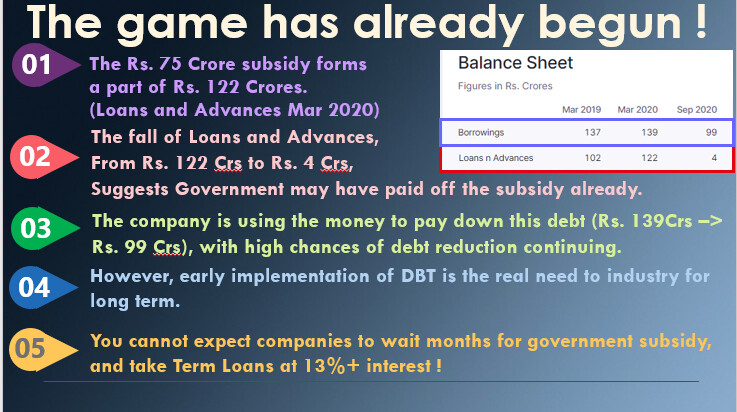 The slides are part of a small video I made on the company, if it helps anyone
https://youtu.be/r7qGENofqow.