Khadim India Ltd: Can it regain the lost glory?

The retail segment is what drives profitability due to high gross margin, ability to pass on price hikes. As a result of premiumization of its products through various subbrands, there has been an increase in ASP leading to higher gross margin. This segment decides overall profitability of the company. So pay special attention as you read further.

· Focusing on product gross margin through premiumization and price increase

A data driven approach has helped us drive some of the above changes towards lower breakeven sales and increased profitability. Every decision is taken keeping in mind profit.

• India is witnessing a significant shift in the consumption pattern of unbranded vis a vis branded footwear, The gap between the two is getting narrower YOY with sharp inclination towards branded footwear. The current figures stand at 45% in favor of branded footwear. Also 40% of the population is expected to reside in urban areas by 2030.

• India is witnessing a significant shift in the consumption pattern of unbranded vis a vis branded footwear, The gap between the two is getting narrower YOY with sharp inclination towards branded footwear. The current figures stands at 45% in favor of branded footwear1. Also 40% of the population is expected to reside in urban areas by 2030. This places the Company at an advantageous position to penetrate into a wider market.
13. Retail and Distribution Sales Growth and Discontinued Institutional sale : Net sales in FY21 had been impacted on account of significant impact on the retail sector which declined y-o-y by 38% due to the pandemic, however, increase in lower margined institutional sales partly made up for the decline in sales during the year. In FY22, the net sales decreased y-o-y from Rs.623 crore to Rs.588 crore, due to company’s strategy of discontinuing lower margin institutional sales. However, the retail and distribution segment grew by around 15-16% y-o-y in FY22. It must also be noted that sales were adversely impacted in Q1FY22 due to the second wave and in Q4FY22 due to the third omicron wave and increase in GST rates. Even though increase in GST has led to some moderation in demand, adjustment of accumulated service GST is expected to ease working capital requirement going forward. On the current demand front, the retail segment has shown improvement since then and the distribution segment is still facing relatively slower demand due to inflationary pressures
14. Key raw materials are Poly Vinyl Chloride (PVC), leather, rubber, EVA, Poly Urethane (PU) and other compounds. A large part of this compounds are crude derivatives (PVC, EVA and PU) and the prices of natural rubber are also volatile depending upon demand and supply scenarios. Khadim’s manufacturing division caters to the distribution segment, where pass on in increase in prices is difficult. The distribution segment, however, has seen a hike of around 20-22% in FY22. The company majorly relies on outsourcing for its retail division (~84% of retail sales in FY22). Khadim has a large base of outsourced vendors who are having long relationship with the company. Due to better negotiating power of Khadim, it is usually able to manage short term volatility. Further, as demand elasticity is relatively lower at the consumer level the company has taken multiple price increases in the retail segment.
15. Retail & Distribution Sales trend with Gross Margins in past few quarters: 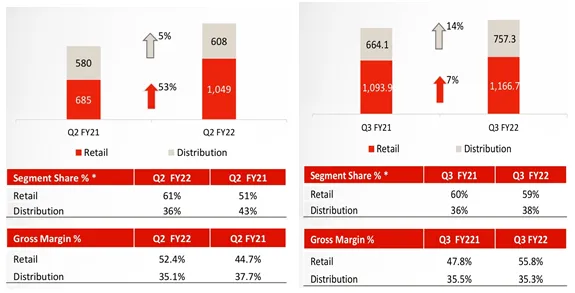 See how retail sales are increasing considering the seasonality effect. But it’s yet to be know whether there is any volume growth or the whole sales rise is result of increasing margin due to rise in average selling price.
16. Future Guidance:

Management is guiding for 800 cr gross sales for fy23 considering gst hike. If we exclude gst hike then it will be 750 cr. and ebitda margin guidance of 12%. In q1fy23 ebitda margin is 10%. with increase in sales and operating leverage the ebitda margin should increase naturally. they intended to do 1000 cr sales by fy25 and ebitda margin of 14-15%. Presently the pat looks down due to operating deleverage

image1192×501 96 KB
So with increasing sales the ebitda margin should rise and the PAT should increase very fast. To give some perspective they did 590 cr sales in FY22 with 9% EBITDA margin of 50 cr ebitda and 8 cr pbt. with sales going to 750 cr in fy22 the ebitda at 11% will be 80 cr and pbt should be around 38 cr. Similarly do the math for mgmt guidance of 1000 cr sales at 14-15% ebitda margins. But take all the guidance with pinch of salt because in retail business you can do all the right things yet don’t get the desired result. Human nature is not like 2+2=4.
17. Findings Based on recent Scuttlebutt to franchise store in my home town:

a. Cleo and Pro are selling more. both are retail brands.

b. They are selling wallet, belt, socks, ladies bag in franchise store under the pro brand.This is new and it’s mentioned in the recently published annual report also.

c. The sales should be good due to all durga puja shopping are done in q2 because durga puja is main festival in wb and ppl do most shopping before it. then the festive season is coming followed by wedding season. Most Khadim retail stores are in West Bengal.
18. 1. Antithesis:
a. Intense competition b. They have good brand recall among our parents who are in their 50s and 60s for products being value for money. But they are now trying to capture the young generation. They have to make brand image among young generation. The results of their efforts are yet to be seen in retail sales in coming 2-3 quarters of fy23 in terms of volume growth which is a normal year. The revenue growth will happen naturally due to rise in average selling price.
c. The retail sale should increase along with volume growth (which is yet to be seen). Because till now retail sales growth seems to be result of Asp increase due to gross margin increase. The thesis fails if retail sales doesn’t grow accompanied by volume . They faced loss on pat basis in past because of declining retail sales only.
d. Debt on balance sheet. The debt is of wc capital loan type. Though the debt to equity ratio is around 0.5 (screener showing 1.17 which considers lease liability as debt). The interest cost is eating the PAT. How ever with increasing sales the PAT will increase due to operating leverage and that should reduce the wc loan going ahead.
19. Valuation:

Company is a turnaround so it should be valued by ev/ebitda or mcap/sales as pe ratio will be misleading due to co going under oeprating leverage.

Based on ttm ev/ebitda they are trading at 9 & ttm mcap/sales of 0.7 and with increase in profit they should be re-rated. Here see the historical valuations

image1186×417 150 KB
So if they do 1000 cr sales and even if they do 14% margin (should not be a big deal they already done 12% in q3fy22 w/o operating leverage) the ebitda should be 140 cr. 2.8x from fy22. if the valuation multiple gets restored to historical valuation during 2018 (mcap/sales of 1.8 and ev/ebitda of 17) the the price should be 2x-3x from here on conservative basis. But again the condition for this is to increase in retail sales with volume growth in coming 1-2 quarters. However the present valuation is cheap enough that even if growth in retail doesn’t happen accompanied by volume the downside is very low. So head I win, tail I don’t loose much type of situation. 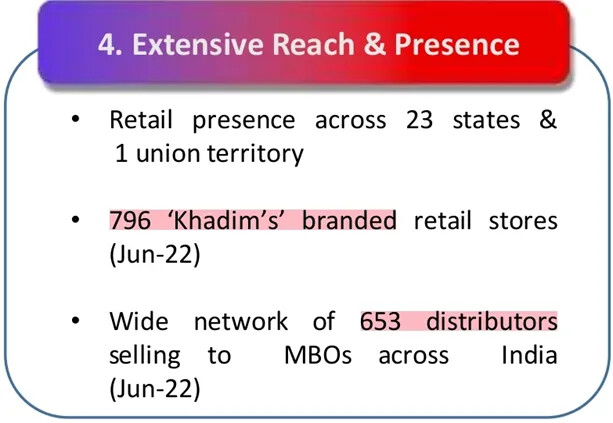 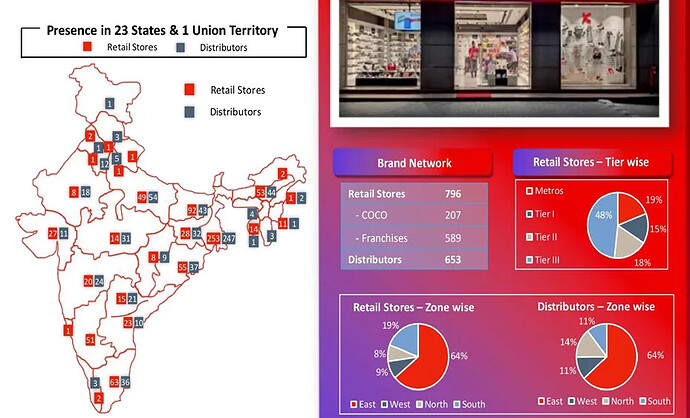 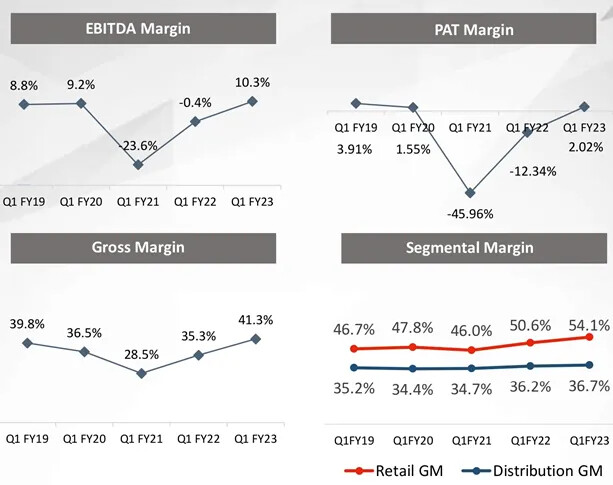 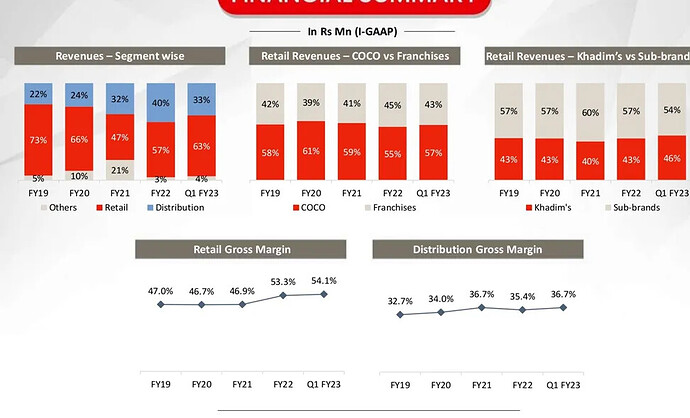