Part 2) Who will manufacture and deploy these TCAS (Train anti-collision device)?
Three Indian companies shave been selected to bid for TCAS: 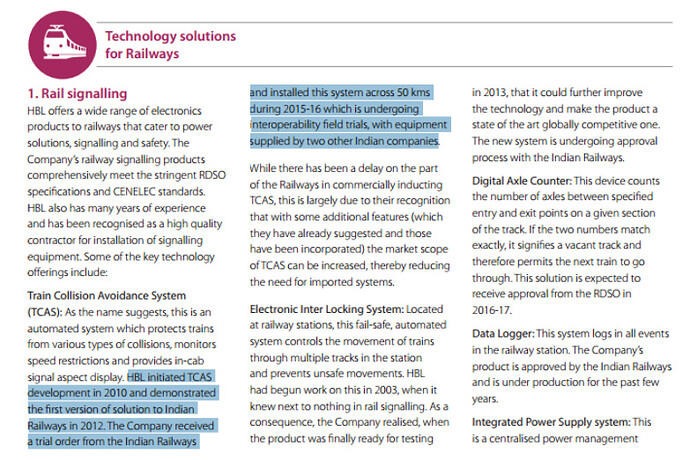 Part 3) How big can the market be for TCAS?

Part 6) What could be the TCAS orders that Kernex will get?

Given that it is an Indian railways order and all three vendors have spent significant resources to develop and run trials for this technology, all three should will get orders.

Source:** Not verified; some scuttlebut

The order distribution for three years could look like this:

Important Note: This is a conservative order-book scenario for Kernex. Kernex might get the second biggest order going by the size of trials being executed by the three vendors)

The key risks for the company is delay in receiving orders from Indian railways.
The second risk is that of execution.

Any new player trying to enter the market will have to undergo 3-5 years of extensive trails and inter-operability tests before being inducted as vendor. Hence, there is minimal risk of new competition entering the market.

Note1: The poor historical performance of the company has been explained in detail in Link given in part 5.

Note 2: This TCAS implementation story can be played through HBL power systems also. But it is a fairly bigger company and the risk-reward appears better for Kernex.

Company is reporting negative cfo of around 1.8 to 3.5 cr per year !! Even assuming revenue visibility there are doubts regarding proper and timely execution and turning the orders profitable.

Thanks for the thoughts, Mahesh. Fair points made, my replies below:

In the past 3-4 years, Kernex has invested considerable resources in developing and testing the TCAS technology (while posting annual losses). The time has come for it to reap the benefits now.

As I have pointed out in the risk section, the actual engineering execution is a risk, but what gives me confidence is that approximately 50-80 kms of the trial project has been executed well by the co.

A few facts regarding the promoter group:

Krishnam Raju (designation Director in-charge) has taken over the day to day operations of the company. He is a US educated (U Penn) next gen young guy shouldering the turn around of the business.

Promoter group appears to have sold some stake and given a loan to the company since the company was struggling to secure incremental borrowing for the past 2-3 years. We should do some more digging here.

On your second question, TCAS has been jointly developed and tested by the three players in collaboration with RDSO. RDSO is the R&D wing of Indian railways. The success or failure of this technology will be directly shared by RDSO. Unlike ACD, TCAS is a state of the art cheaper version of the existing European technology. Approximately 100 Locos already use that expensive tech in India. TCAS is the make-in-India cheaper version of the same tech that can be deployed for mass use because of superior economics. Given that the TCAS project has been spearheaded by the RDSO itself and painstakingly developed over the last 6-7 years. it highly improbable that it will be shelved. There is no equivalent substitute at the moment.

Good find and detailed write up. Few clarifications -Railway tenders are very stringent. If RDSO is involved not sure how can they justify the budget, proposal and acceptance of the same. Past of railway contractors Texmaco, Titagarh, Kalindee has not been good, The only positive side being Government recognizes Railway as key infrastructure and will invest in it. As seen most of the government construction related business are going to NBCC. I would still bet on NBCC to be major beneficiary of Railway platform development though the margins will be linked to mutual monetisation of huge land parcel Railway holds.

Am nt sure finance of company may be the reason for stake sale as 7% is equivalent to just~3.5cr, Also if they indeed wants to finance they would preferably do it through equity infusion or through issuance of warrants but selling already low stake doesn’t deem to be a sensible reason Probably some digging needs to be done here

It has ~ 35cr worth of trade receivables and a major part of it (16cr +) is under dispute from the debtors like konkon railway, it has been the case from couple of years as expressed by a "Qualified opinion " by auditors

Secondly when you project back of the envelope financials till fy 20, interest cost is kept constant which by will not be the case

And isnt the award of projects by railways through tendering? then will kernex be able to outbid other bigger and efficient players like HBL 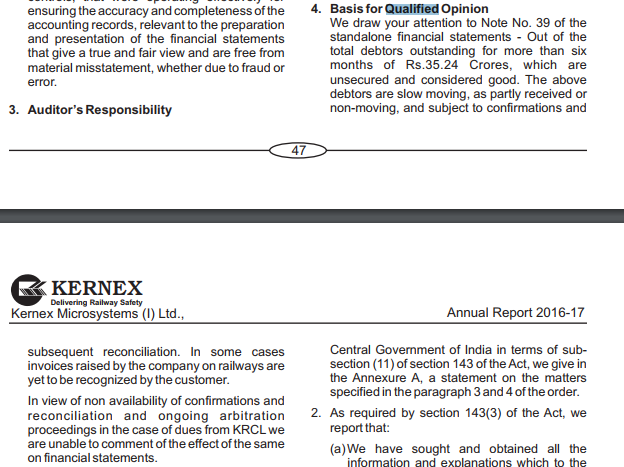 I fully agree. Invested at 125 levels and held it for long years. The company just not performed. Every time rail accident happen it will move and then company will meet with accident and injury to shareholders. I exited three years back without much loss.

Kernex has an ongoing dispute with Konkan Railways for receivables amounting to ~16cr. I agree that it appears unlikely to be recovered fully any time soon. A write-off (partial or maybe even complete) might be required. I would contrast this with the potential market size of TCAS and the expected order potential for Kernex which could be more than 10x the current market cap and easily cover for this write-off.

Agreed there will be finance costs as well. The exact economics remains to be seen, but one would expect a PAT level 8-12% given that it is a critical engineering solution. The back of the envelope calculations are quite conservative in the EBITDA margin assumption of ~12%, It might be much higher (in range of ~20%)
It would be highly unlikely that the finance cost alone would eat up the entire margin. The project would be commercially viable.
Notice that Kernex used to make 30%+ Ebitda margins 7-8 years ago.

Regarding the ability to bid competitively, Kernex is already executing the ‘development tender’.
Below is a screenshot from the TCAS ppt uploaded by Kernex. 1406268511171-TCAS Presentation .ppt (1.2 MB)

The size of development tender being executed by Kernex is bigger than that of HBL Power. 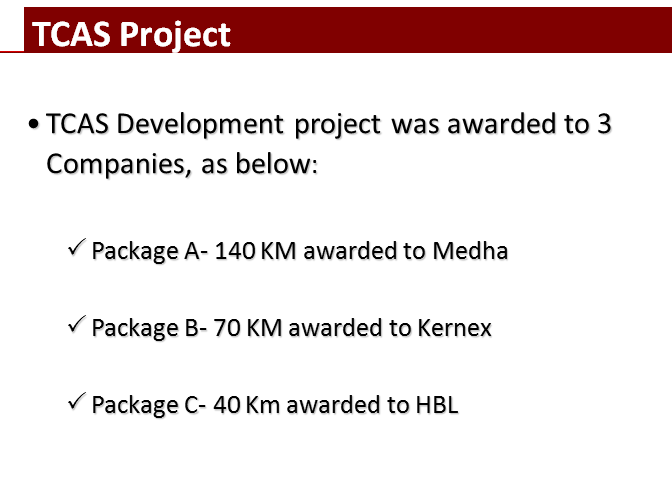 Some excerpts from the FY17 annual report: 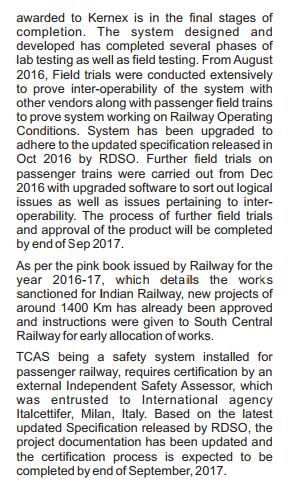 I agree to some points, Successful sale of land (Fetching ~20 - 25 cr) should give much needed life of liquidity to the company, Also i have noticed that they have an arbitration suit against konkan to the tune of 348cr!! , even a partial settlement of this would be v positive 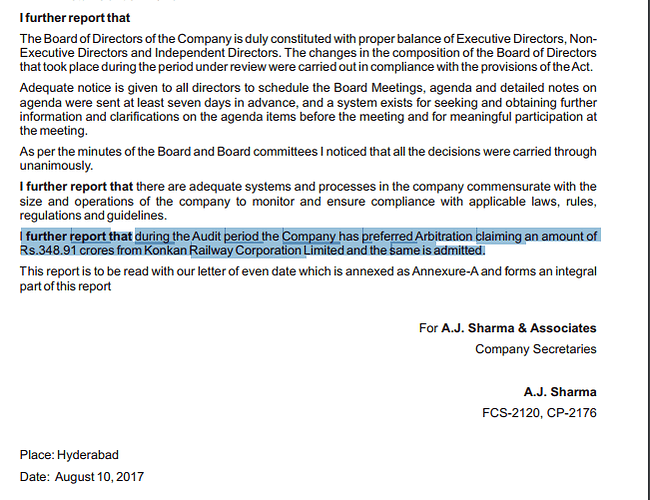 The key monitorable is the forward steps from govt towards implementation of TCAS (All phases of testing is supposed to be over by end of the month as per hbl and kernex AR), Also Piyush goyal chairing the railway ministry should also move things quick, In, Recent speech of him at IIMC, he did mention the use of technology to avoid accidents.

Keen to see how this story unfolds

In the curiosity to dig in depth with related to certain issues, I have called Mr Sampath, Company secretary and Compliance officer of Kernex and asked some of my queries

Whats the progress of TCAS test runs and when do you expect the orders to start?

A) Everything is as per track and will be completed by the end of this month and we expect the tendering process to start from next month.

How will the tendering process work?

As per you AR, Due to lapses in compliance issues, your script in placed in trade to trade segment in NSE & BSE, When can we expect this to be sorted out?

A) We are actively looking into this issue and tried to comply with all requirements, however there is a small fine levied by NSE, which is pending. We have appointed an outside consultant and look forward to resolve this issue at the earliest

As per your disclosure in AR, you have an arbitration amount worth ~348cr against konkan railways, when do you expect to resolve this?

A) Its correct, the proceedings are going on and we are expecting to settle this soon (didnt commit the exact timeline), we are supposed to have met konkan in july but it got postponed, we are confident to settle for at least 10%-20% of the amount (~34cr - 70cr)

You have passed a resolution to sell the land bank , not less than its book value, whats the status on it and what is the value of it on books?

A) Its on progress and the book value is ~32cr

At current Mcap of 50cr, the story looks interesting

Disclosure: Not invested but actively tracking

You have passed a resolution to sell the land bank , not less than its book value, whats the status on it and what is the value of it on books?

A) Its on progress and the book value is ~32cr

At current Mcap of 50cr, the story looks interesting

Thanks for sharing the findings. The facts very much corroborate the initial thesis.

The land (which has been put for sale) was purchased way back in 2005 for creating the ACD infra. If the book value of the land is 32 cr, just curious how much the current market value will be
?

Yes it does support your initial thesis, Coming to the land & factory building part, hardware park is located in the raviryal village and i did a search in sites like magicbricks which is throwing up a land valuation of 9000 - 12000 per sq yard. So at 9000 per sq yard 10 acres ( 48,400 sq yards) will fetch around 44cr , which is 90% of the current Market cap!! In addition to the land it has its facotry and buildings too which are put up on sale. 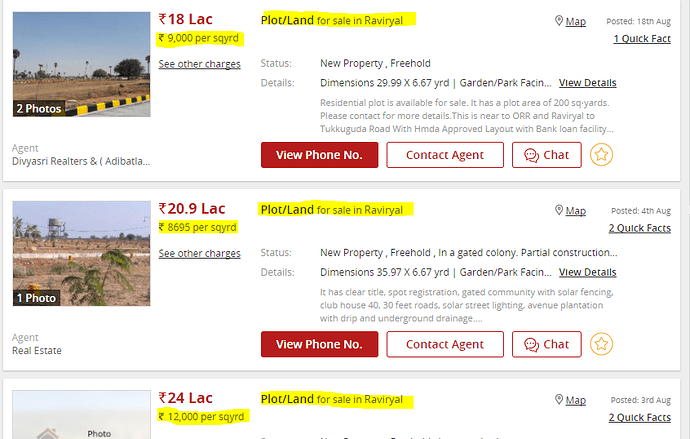 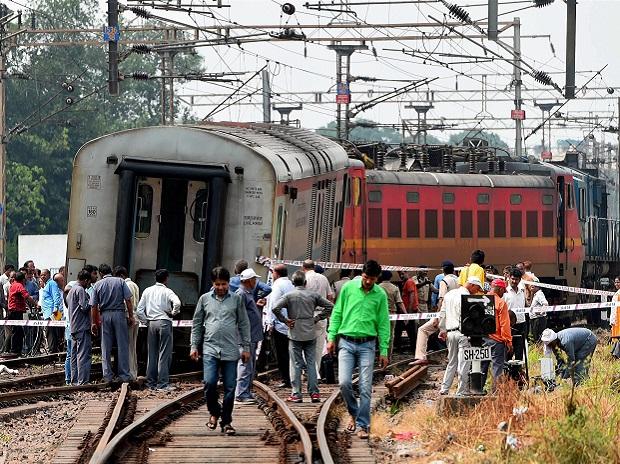 New coaches also on the cards

Is it referring to TCAS?

Yes, it is referring to TCAS when it says ‘collision avoidance system adopted for India’ 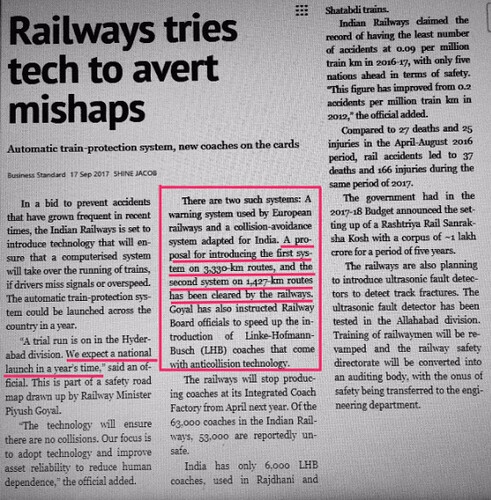 And when it mentions ‘1427 km routes cleared by the railways’, it is mentioning the order book of 250cr for this year. If you add up the total length of the orders in the table below (from the first post in this thread), it will come to that.

Thats a positive news, considering only 2 qtrs left in this year , will they be able to execute the entire 250cr order in 2 qtrs