Any opinion about this news item about lowering of cotton seed prices in Maharashtra?http://www.financialexpress.com/article/markets/commodities/maharashtra-govt-reduces-prices-of-bt-cotton-seeds/82401/

Many boarders know management well. Do you think they will use this to expand market share in Maharashtra or fight with the govt?. Do you think this decision will have no impact as most of the seed is already sold to dealers?

number of bt cotton seed packets kscl sells in MH is a small % of its total sales and will no impact profits materially. it affects its growth plans though. As management said in concall if the price is reduced, the seeds will go where the price is higher. This effectively means that bolgard-2 seeds (most sought after variety and where price reduction has happened in MH) will probably be withdrawn from MH dealers. MH farmers then will have to travel to bordering states to buy bogard-2 seeds! (effectively increasing their cost) or dealers may surreptiously sell underground stock at 'ON" with cash component. govt is making life for farmers further miserable. i am sure if the seed companies use ‘game theory’, they will withdraw their bg-2 seeds from MH and divert them to bordering areas of other states. due to delayed monsoon, most of the seeds are yet to be sold. Boarders in touch with dealers may corroborate this…

Cotton acreage in top grower India is likely to drop by the most in over a decade this year, as plunging prices and fears of a drought prompt farmers to switch to cultivating pulses in the hope for be

I would not get distracted by this kind of news as this noises are regular feature pre monsoon like last year. I would rather focus on Kaveri management recent commentary during con call. They expect increase in acreage during current year in south where they are dominant and have strong hold. As far as reduction in price in Maharashtra is concerned the impact would be minimal on overall margins and profitability as they mentioned that they would divert their sale to other states.

Maharashtra state govt notifies companies will have to sell BT cotton-II seeds at 830 rupees a packet versus 930 rupees earlier.

If other states also started following Maharashtra, it may become a big issue for Kaveri.

Stay on course despite volatility my friend. Patience pays. This price reduction may lead to consolidation n may adversely impact Ajeet n Mahyco who r stronger in Maharashtra.

I am staying invested.Kaberi is a fast grower in a slow growing sector . 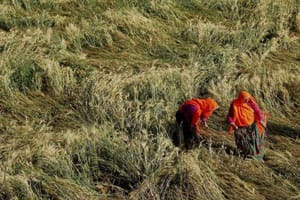