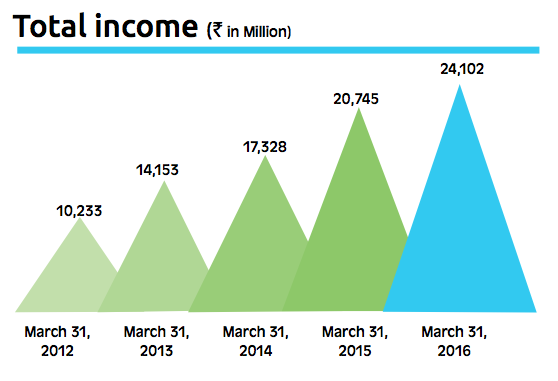 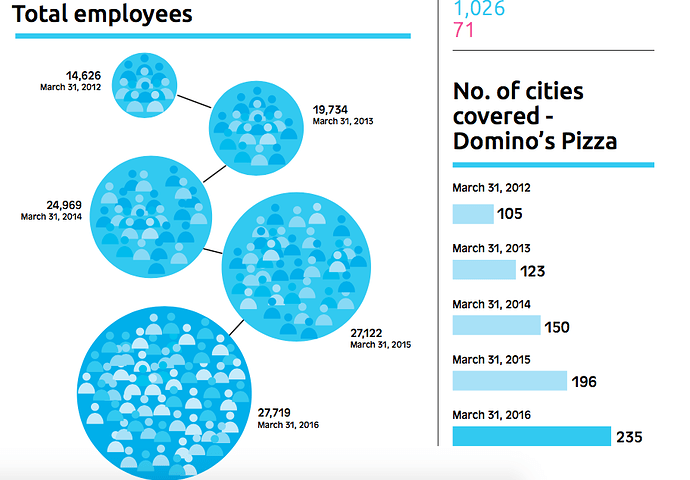 Thanks for starting this thread.

Jubilant is a great bet for consumer spending. I see two problems with your thesis:

Recently there was a change in leadership. Not sure it will impact.

Disclosure not invested, but like the business model and tracking for price dips.

They are actually caught somewhere inbetween, own store sales was never their USP, it’s dominated by pizzahut. At the same time in deivery they are getting stiff competetion from food delivery aggregators. Cutting price is also not the right strategy as they are already selling very cheap compared to peers. People are not ordering pizza to homes as much these days not because they think it’s priced more but because they have other alternatives.

I didn’t get what you mean by IT cut.

75x TTM PE for turn arounds is fine(ie only it turns around). Thats why for such turn arounds I prefer to look at PS than PE.

By IT cuts I meant the recent trimming of IT workforce due to US visa issues and general slowdown attributable to automation.

And on turnaround, I think turnaround means they have depressed profits or even say losses and we expect them to turnaround. In this case I think Jubilant has done really well in the past and the concern is on future growth potential.

In Tier 2 cities, the major problem I see if the IT cuts. I am not saying the industry is slowing down. But for sure, headcounts are being cut in Tier 2 cities. This puts some pressure on sales in tier 2 cities. Further, how sure are we have stagnating sales is because of slow growth in tier 2 outlets. It may be fully utilised for all we know.

Ok got it, by IT cut you meant consumption of tier two will grow slower than metros.
May be or maybe not, IT is not there in most tier 2 cities . India have 8 metros and 80 tier2 cities and maybe 600 tier3(if we blindly label all district headquarter as tier3 or above). In most tier2/tier3 cities people’s income is either from some local industry or govt jov. I am betting on the fact that people of tier2 cities haven’t yet started eating pizzas like people in metros, they will learn to eat soon. In short term, yes you are right, few tier2 cities are impacted by job loss. After 5 years IT workers of metros will also loose jobs with automation of more skilled works. But these reamining tier2 cities’ folks ie people serving local industry or serving govt will never loose jobs.

I am not betting it to grow like it has grown from 2005 to 2015 but definitely If we look to split it into two separate business one for tier1 , one fore tier2. tier2 cities have around 30% Inda’s population whereas metros only 10%. So there is enough potential for growth and eventually become a bigger business than tier1. Even if it grows rapidly in tier2 the overally growth will be 15-20% because of stagnant tier1 part of the business.

Hi,
I am new to this! So, excuse my ignorance.
However, going through their presentation it seems that their same store sales has more or less stagnated. Coupled with the fact that the price realisation has been declining ( indicating that the brand is unable to continue commanding the same premia as earlier ) the incremental profits from older stores would be negligible. Consequently, if the new stores in Tier 2 towns are not adopted quickly due to ingrained consumption habits and/or other issues it would mean that the margins would further shrink ( on account of costs ). Meanwhile, they also seem to have embarked on building up the Dunkin Donuts franchise which may eat into the both management time and resources and the returns may be quite some time away. I also assume costs in Tier 2 would be lesser thereby increasing the potential margin and if a similar rate of growth as in the initial years can be managed ( this may still be possible as discretionary spending is expected to rise as a result of the recent Govt initiatives ) without compromising on prices, the bite may still be tasty! Albeit not in the stated 30 Minutes!

A good opportunity for Jubilant to capitalize on McDonalds’ customer base temporarily.

The closure will hurt McDonald's which has been sliding in India since it was dethroned by pizza brand Domino's from pole position in 2013.

An interesting chart of dominos from google trends india

Rent is one of the big expense that they incur, with GST applicable for rent as well - this might help them in the bottom line, in a substantial way.

Can you explain ? My understanding was rent is going to increase with 18% GST

Could Rohit mean in terms of claiming input against GST?

On an unrelated note, I’ve noticed that Dominos and Dunkin’ have reduced their marketing footprint by a substantial margin compared to 2013-2016 period. Their brands are strongly placed in the market now and they don’t need to spend heavily on advertising going forward.
Other things I’ve noticed is, they’re going for tailor made offerings both in terms in product mix and size of outlet. For example, both Dominos and Dunkin’ have small takeaway outlets in my office building since 90% people prefer to take away and eat in their office cafeteria. Besides the Dunkin’ only offers the takeaway menu where turnaround time is less than 5mins per order. 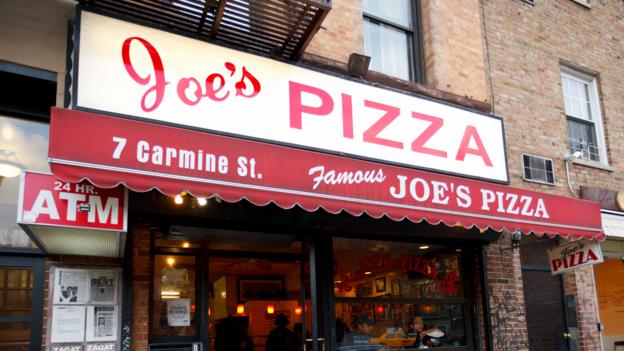 How fast food reveals secrets of the economy

From the Pizza Principle to the Waffle House Index, fast food can reveal surprising things about our behaviour and hidden changes in the market.

The Jubilant FoodWorks stock was up around 5 per cent even when the overall market was down and volatile on account of profit-booking after hitting new highs in the previous sessions. 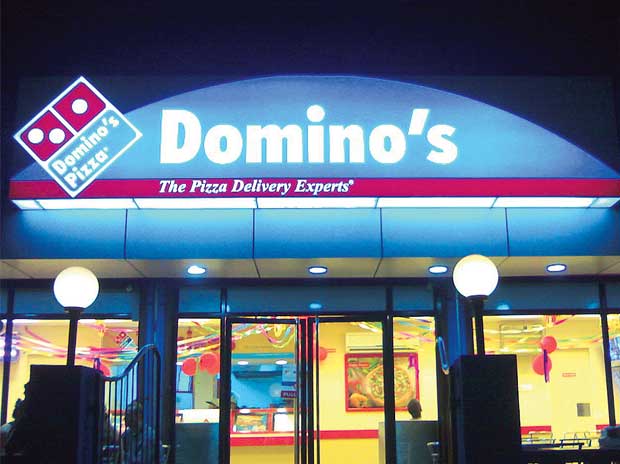 what does claiming input against GST mean ?

Hey, as mentioned it will bring a large tailwind for Jubilant 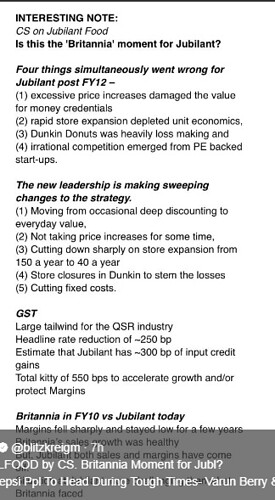 McDonalds east and north franchise partnership with Connaught Plaza Restaurants has been terminated.

The three new proposed contenders are:

I think Westlife Development will get the contract as they already do it for south and west but I am curious wouldn’t it be conflict of interest if Jubilant Food gets it as Dominos in someway compete with McDonald.

Yesterday macquarie capital & equirus have increased price target on jubilant food based on their channel checks of this quarter. 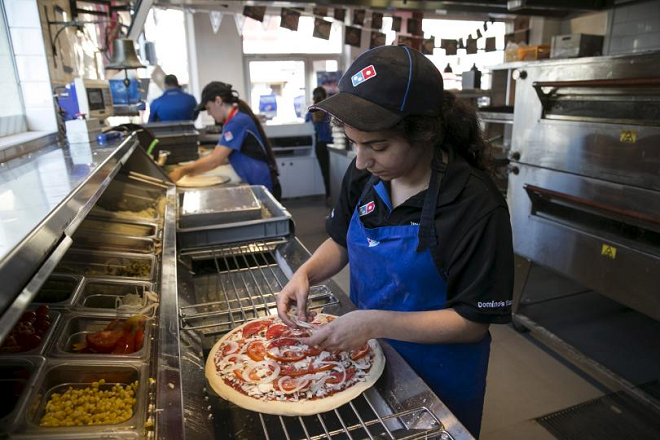 After global research firms such as Deutsche Bank and CLSA cheered for Jubilant FoodWorks, exclusive India franchisee of Domino’s Pizza, Macquarie too has joined the bandwagon with a buy call on the stock.


I think they have also missed one important trick which the whole market is missing-COST SAVINGS. Just look at the remuneration difference (Rs 10 cr)between the new CEO Mr Pratik pota & Old CEO Mr Ajay Kaul. Further there has been layoff in the middle management too. And to add to that the delivery boys are now employed flexibly i.e. part time only during the peak hours in the evening and on the weekends.All this can translate into an EPS increase of Rs 10-Rs 12 which translates into Rs 500-Rs 600 share price even if we give only 50 time EPS .
All n all I think it can be a great play to participate into the great Indian Consumer story!
1 Like
ishandutta2007 October 5, 2017, 7:28am #24

Where is the 10CR difference that you are seeing. Ajay Kaul’s total compensation was 10Cr that too 6Cr is just stock options? 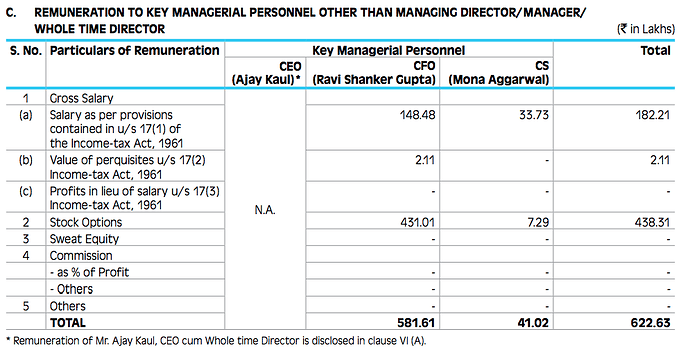