I am initiating this thread to put my perspective on Indian Paper Industry and JK Paper.

INDIAN PAPER INDUSTRY - OVERVIEW
India has approx. 21.5mn tonnes total capacity and capacity utilization is 17mn tonnes, which is almost 80% utilization. There are a total of 750-800 paper mills in India which as estimated turnover of INR 50,000 crore (USD 8 billion) approximately
Indian paper industry is highly fragmented: the top 3 players account for only 9% market share unlike 68% in USA, 72% in Indonesia and 21% in China
Production Country wise
• USA: 70mn tonnes
• China: 109mn tonnes
• India: 17mn tonnes [out of this only 1.53mn tonnes is dominated by top 3 players]
Only 50 mills possessing a capacity greater than 50,000 tonnes per annum. Approximately 72% of the total installed capacity in India is concentrated in Andhra Pradesh, Gujarat, Odisha, Karnataka, Maharashtra and West Bengal. Printing and writing paper demand was estimated at about 4.6 million tonnes, growing at about 5% per annum. Packaging board is in high demand with an average annual growth rate of 13-15% from growing end-use industries including pharmacy, food, garments, and consumer goods. Containerboard is the most fragmented category, with the top 10 producers representing only 35% of total capacity. Tissue accounts for less than 1% of the total paper production in India compared to about 8.2% globally.

The per capita paper consumption in India at a little over 13 kg, is way behind the global average of 57 kg. India share in world production is only 3% in FY18. 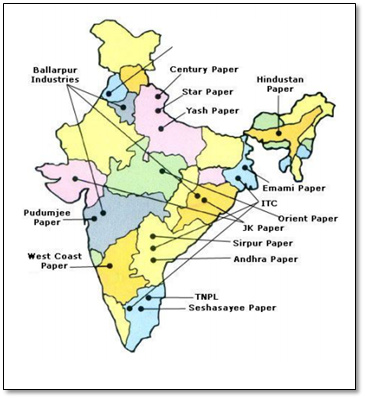 Demand of various grades of paper and paper products 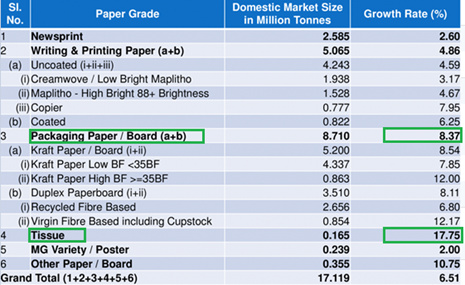 With diminishing forest resources and limitations on enlarging man-made forests, there is scarcity of raw material for paper mills. Due to the domestic scarcity of wood, the wood based companies have increasingly resorted to import of wood chips and also invested in the social forestry initiatives for supply of wood. 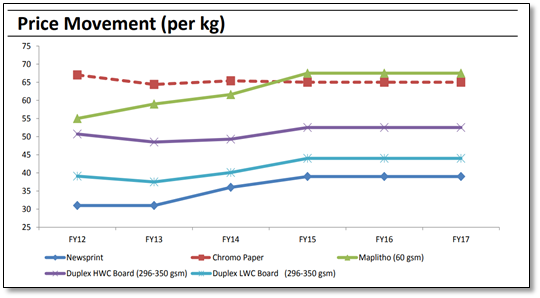 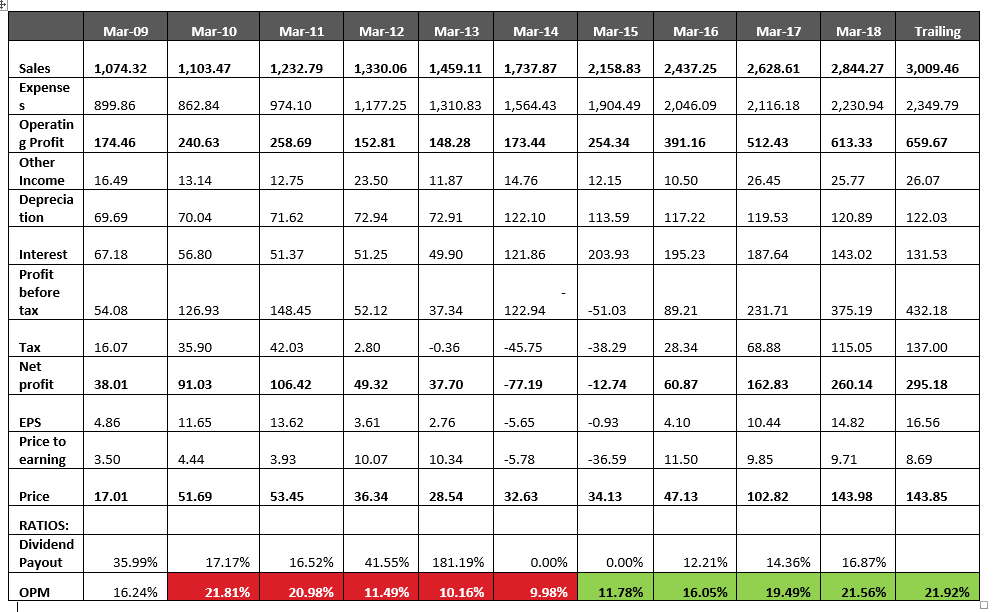 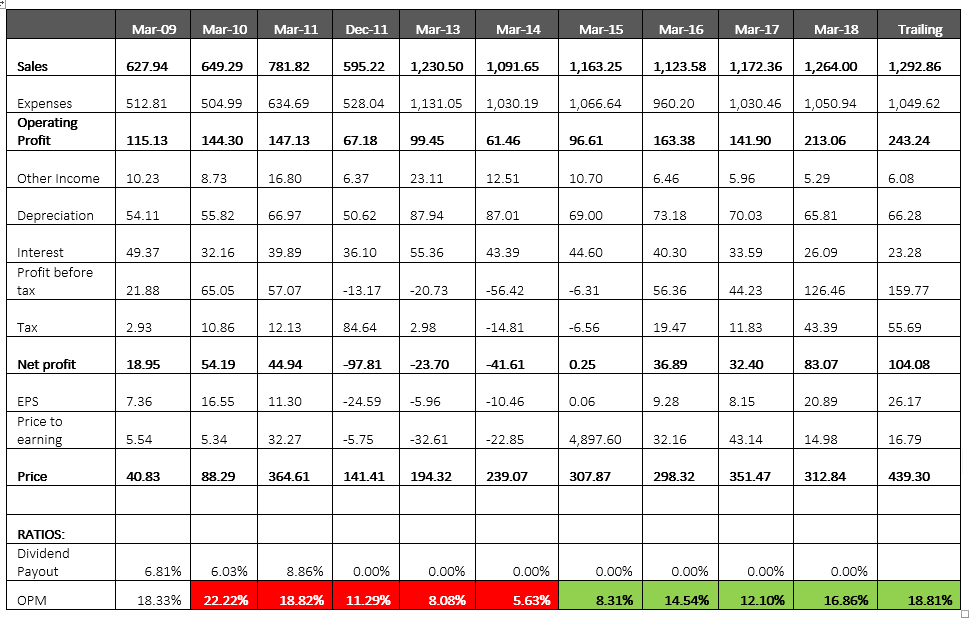 Margins of both major paper companies have declined between 2011 to 2014
On account of demand supply mismatch in year 2010, various Indian paper companies started expanding capacities aggressively. The total expansion was 1.6mn Tonne which was 15% of total production at that time.

During same time the wood pulp prices increased which is the main raw material for printing and writing paper. This is evident from increased operations costs in books of various paper companies.

Added capacity expansion lead to build-up of inventories and with pricing pressures due to high RM Cost led to stress on profit margins for most players during this period. The companies were unable to pass on the higher prices to consumers and at the same time also faced stiff competition from cheap imports from China and other ASEAN countries. Profits were severely impacted, especially for leveraged companies.

Recent Results
-JK Paper revenue grew by 25.8% yoy in Q1FY19 due higher sales volumes (+21%) & improved realization of +3.9%. Generally, Q1 is considered as a seasonally weak quarter and Q4 as a seasonally strong quarter for paper industry due to start of new school season in April-May. On a sequential basis, the company witnessed 5.7% growth in sales whereas as most domestic paper manufacturers have reported almost flat sales revenue (as they are operating at almost full capacity).
-The Company repaid debt of Rs 460 crore in FY18, moderated the cost of debt which led to a decline in interest costs from 6.9% of net sales in 2016-17 to 5.1% in 2017-18, strengthening cash flows

-Receivables are reduced to 14 days

-Share of raw materials procured from within a 200-kilometre-radius of the Company’s plants (%) has increased from 41% in FY16 to 71% in FY18 which has reduced the logistics cos drastically and helped in immediate sourcing.

-JK Paper has very strong cash flow. There has been a huge increase in last 3 years 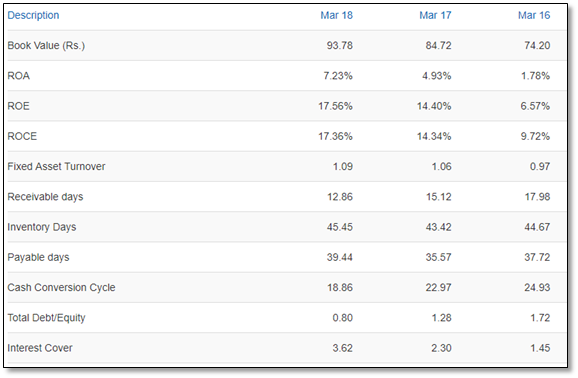 Ban on waste paper import by China [The Biggest Trigger]

China has stopped imports of several grades of waste paper as a part of campaign against foreign garbage, which has created shortage of raw material and impacted the paper production. Further capacities close to 3 lakh tonnes per annum are shut down due to lack of environmental compliance. As a result, packaging paper prices, for instance, have shot up by 40 per cent to over 5,500 yuan per tonne since August.

China's move to ban 24 types of imported waste, announced last July and implemented in January, was hailed by environmentalists as a big win for global green efforts.

China has stopped imports of several grades of waste paper. This is due to a sustained campaign against foreign garbage, which has created shortage of raw material and impacted the production of paper.

-There is a sharp drop in Old Corrugated container (OCC)
https://www.bloomberg.com/professional/blog/china-sinks-old-corrugated-container-prices-now/

Aforesaid ban announced last year July’17 however, was effective from 1st Jan’ 18 only. Now, due to this ongoing ban 2 major changes are happening.
-Due to reduced production price of all types of papers are going up and are very firm.
-Existing capacities in China started using fresh wood pulp for producing paper which again increased the demand of wood pulp and price of which is also increased.

Now, two kind of companies will be able to take the advantage of above situation: 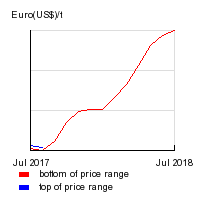 Business in the European pulp market is still relatively quiet in August. Market players expect prices of hardwood and softwood pulp, which remained largely unchanged month-on-month in July, to move laterally again in August. Some buyers are nursing... More paper price rises are on the way next month with merchants issuing letters outlining increases of up to 8% after receiving notification from the mills of the need to raise prices.

Strong Distribution Network
JK Paper has robust distribution backbone comprising over 208 wholesalers and over 4000 dealers coupled with 16 depots, resulting in a virtual anytime anywhere availability of products pan-India. The Company penetrated deeper across markets with the proportion of non-metro wholesalers at 70%

Increase in Capacity and Other Benefits

-JK Paper would also benefit in terms of raw material sourcing for the Sirpur Plant. Telengana Government would provide wood at subsidized rate to the company.

-JK Paper will get huge benefits from this deal. See below: 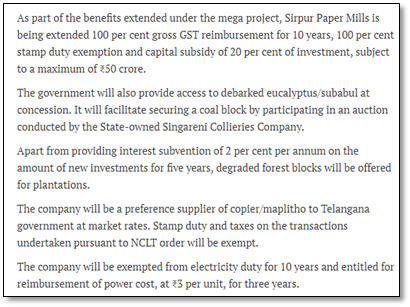 -Capacity of JK Paper is one of the largest in India. With increased operational leverage they are ready to take the advantage of present shortage scenario. Please note, JK Paper has very strong balance sheet, healthy return ratios and debt to equity position. Over the period they performed well in line with paper industry.

-Shift to Digital, which would reduce paper consumption.

Given all above facts signifies that good days are ahead for big players in paper sector who uses waste paper as raw material and have fully integrated manufacturing plant.

Disclosure: I have JK Paper as a part of my portfolio.

Nice write-up Deepak. You seem to have touched almost all the bases. In last two years, paper cycle has turned and JK paper is uniquely placed to reap the reward.

A multitude of triggers came in quick succession - BILT financial collapse, higher global pulp price, China paper import ban, acquisition of Sirpur Paper at less than half the cost of a greenfield setup, plastic ban and resultant switch to paper packages and INR depreciation. All these have the capacity to move JK Paper a different orbit altogether. Ground reports suggest there is some amount of scarcity in copier paper supply where JK has a dominant share.

There are some risks too. The biggest and foremost is labour unrest. Last quarter it lost quite a bit due to this. In future too, labour may want it’s share if it seems the company is making good money.

With a bit of luck, it may turn a good cyclical uptrend story.

Disc. - Invested. Views are definitely biased. Not a buy/sell/hold recommendation.

Nice write up … I have also started tracking recently and like the story.

Couple of Queries that I have :

In my view the pace of expansion can dictate terms here. Any idea by when can we expect expansion plans to materialize for JK

Disclaimer : Only Tracking and not invested . Pls do your own research

k, it may turn a good cyclical uptrend story.

Disc. - Invested. Views are definitely biased. Not a b

I think they lost 4 or 5 days in Q2 due to contract labour unrest and after that there was a notice from the company that all is well and they reopening the facility. This may impact their Q2 results but not sure it will be substantial. But agree it is a risk for sure and in the current market any disappointment in numbers wont be taken up lightly

Does the Market has this much demand

Current domestic industry capacity 12.7 MT. Present demand 13.2 MT, domestic production 11.4 MT , import 2.2 MT, export 0.5 MT. So, 1 MT expansion is unlikely to create massive supply overhang as demand is expected to grow to 23.5 MT by 2025. Even if the all the expansions go as per plan, India would still need a substantial import.

Currently greenfield expansion is very difficult in India due to land acquisition and political opposition by native people to polluting industries. Brownfield expansion/revival of sick units are the most viable options, IMHO.

Please refer to the below link for a good industry view.

Growth of Paper Industry in India

P.S.: JK Paper is not an undiscovered story. It has been discovered and rerated by the market. It has already been a 5x bagger and any upswing from here would not be that spectacular and incremental only, in my opinion.

Jk paper is sitting at a very interesting turning point in it’s growth.

It has a huge debt on it’s books but the industry is also aided by tailwinds. The promoters have experience so probability of this turning into a multigrowth business are good.

It has a huge debt on it’s books

Actually they have reduced their debt by almost 40% in last 3-4 years. Quartely interest costs also have halved in last few years. On the year ending March 2018, their borrowings were less than their reserves, first time in their corporate history. 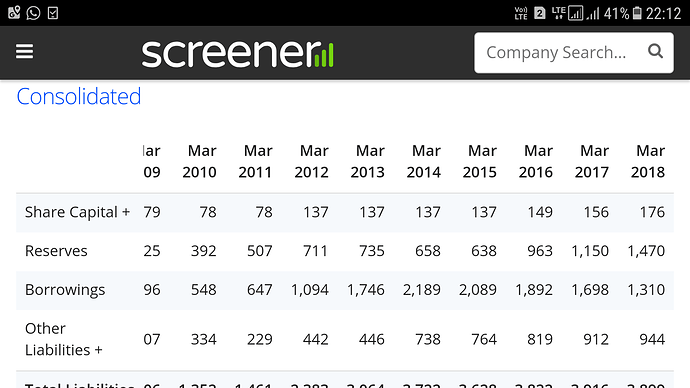 Debt has came down significantly in last 4 years.

I am mentioning their financial health post takeover of Sirpur paper mills.

And it is exactly this handling of debt which has given me confidence in the company.

Any idea when is the Sirpur plant starting?

Any idea when is the Sirpur plant starting?

It’s scheduled to restart around December 2018 but real gains will start only after March 2019 after the production stabilizes, in my opinion.

Nice Research work done.I am more of a Technical Guy and Rely on stories like this very much.My view on JKPAPER remains positive for now @ 159 with demand zone between 130-110 levels ( on price correction ) , Price move above 190 levels will lead to further breakout on the upside for long term.
Per Capita Paper consumption is the real theme going forward and Capex is going to be the game changer for this Company what I think fundamentally.

According to my knowledge, Sirpur Paper Mills will resume production by end of March 2019 or Early April 2019. The synergy behind this acquisition is to enter and establish foothold in the Kraft Paper segment, where JK Paper is not present currently.

In Sept 2018 the overall MF allocation increased well in JK …

Hi @prasanna, Which website is this,showing the increase?
As per BSE it remains same 1.03% in percentage terms, in fact it is reduced by 14,585 shares from June’18 to Sep’18. I have also checked the site by one of VP forum member https://phreakonomics.in/shareholding/index/JKPAPER, it remains same, no change.
https://beta.bseindia.com/stock-share-price/shp/scripcode/532162/flag/7/

it seems it is not consistent with the data shown on BSE.
Thanks any way for pointing to a reference site.

The West Coast Paper Mills, Tamil Nadu Newsprint, Papers Ltd, Ballarpur Industries and JK Paper had filed an application before the directorate for initiation of the anti-dumping investigation.

Outstanding Q2 result. Results look spectacular both QoQ and YoY. After Sirpur plant commissioning in coming quarters, it is expected to rise further. Interesting to note is - debt and interest cost are in a downward trajectory even after considerable spend in Sirpur acquisition and integration. Stock may be rerated going by the result.

Disc.: Safe to assume I have vested interest. Please do your own due diligence.