A few things to understand about the Cinema/multiplex space.

ATP- is the average ticket price
F&B SPH- is the food and beverage spend per head
Occupancy- The number of seats filled per screen
Footfalls- number of people visiting the establishment in a given period. (could be yearly or quarterly)

Lets say you are interested in the business and want to build a multiplex:

Along with this the burdensome time we spend watching the vicco vajdradanti and lyra ads during interval and start of the movie, also provides us with additional revenue.

Other sources of revenue would be any ticketing platform use, renting out some space to different vendors, etc.

The footfall generally increases, after a year or two of operations. So in 10 years time, we will own the infrastructure of the screen as well as a free cash flow machine. Due to dealing with customers we get upfront payment and there is no bad debt scenario, giving us a negative working capital.

Before we get too excited by this, lets see the challenge in opening a screen. The regulatory approvals take time. If you’re ready to build a multiplex right now, it takes 4-5 years to carry out the plan. Why so? Multiplexes are generally built in a mall. So, the plan needs to be present when the mall is being planned as well. Plus there is usually an exclusivity given to only one multiplex per mall, as multiplex brings a lot of footfall for the mall as well.

INOX LEISURE:
It is a company of the Inox group which consists of a lot of companies in Chemical sector.

This is why single screen lost popularity and how soon they lost it: 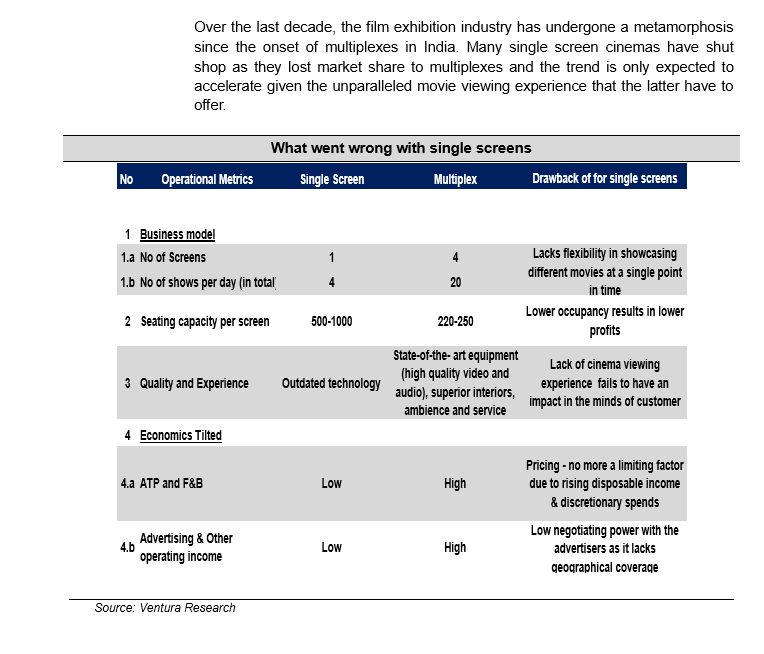 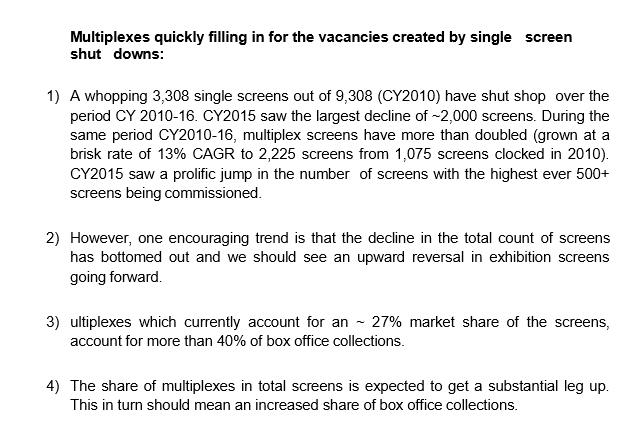 After a screen has matured, nothing other than external content will be able to drive revenues. So, geographical expansion is key to grow.

Following is the growth strategy for Inox:

With the entry of Insignia, Inox IMAX, and the aggressive expansion with no net debt seems like a good opportunity.

This is my first post on ValuePickr and I have gained a lot of knowledge here. Do let me know if I have made any mistakes or breached any community guidelines.

I have been tracking this stock since a while now and I feel that the stock will soon get re-rated. Here is my thesis which I had posted on a different thread:

Inox Leisure Ltd. is in the business of exhibiting movies through its chains of multiplexes run under its brand name ‘Inox’. It is the second largest chain of theatres in India with around 583 screens after PVR which has 748 screens.

Over the last 4-5 years, Inox has always traded at 40-50% discount to PVR’s valuation and even at current prices (Inox CMP: Rs. 316, PVR CMP: Rs. 1721) Inox is trading at 47% discount to PVR. (Inox is trading at 23X TTM P/E and PVR at 43.5X). However, given the improvement in Inox’s performances on various metrics warrants a re-rating of the stock vis-a-vis PVR and also given the growth prospects and financials of the company. My bullishness stems from the following factors:

Historically, PVR scored well on above metrics compared to Inox by wide margins. However, in last 3 years, Inox has capitalized on those levers and have improved its performance across metrics.

However, as you can see from above, Inox is catching up fast with PVR on all those metrics which is showing up in their margins.

Inox has seamlessly added screens over the last 3-5 years without stressing its balance sheet. Moreover, it has also not faced much delays and has been on time in adding newer screens. In addition to this, the company has signed definitive agreements with developers to add 830 more screens over the next 5-7 years. Moreover, nearly all of company’s screens are coming in new cities where they don’t have a presence, thus it’ll increase its target audience.

Bahubali 1 had set the box office on fire with its humongous collections of Rs. 515 cr. (gross) At that time it was believed that this was a one-off instance and to be treated as an aberration. However, since then every year there have been movies which have outpaced the previous ones. Bahubali 2, Robot 2.0, Avengers Endgame, Uri, Sanju and Dangal are examples of movies which deed extremely well at the box office and the pipeline going ahead also continues to be strong. 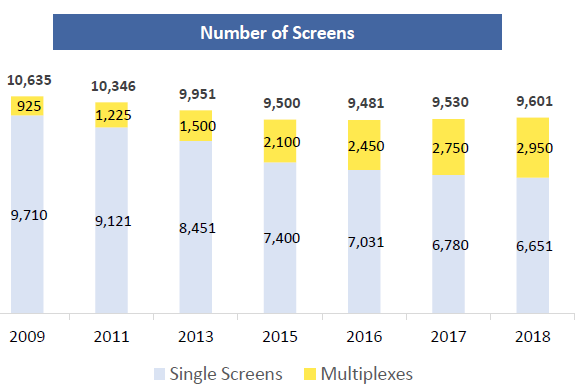 And despite the increase in the number of multiplexes screen, per capita screen ratio is still lowest in India with 8 screens per million people, compared to 125 screens in the USA and 37 in China.

So given the strong macro headwinds, and improving micros I think the huge valuation gap between Inox and PVR is unwarranted and we should see the re-rating happening over next few quarters as company delivers even better performance and closes the gap with the industry leader.

Thank you for your patient reading. 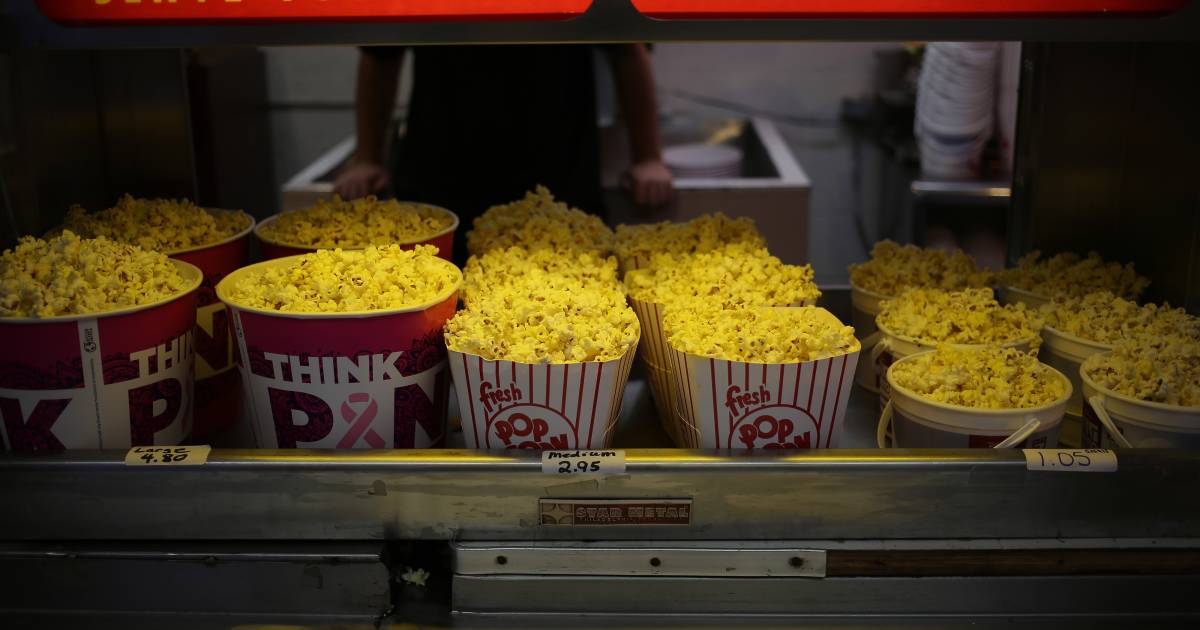 Why analysts are more bullish on Inox than PVR...

Good analysis @Akshada_Deo . One more reason why I like Inox over PVR is due to the promoter holding and also the fact that PVR top management has been previously fined by SEBI for price manipulation. Bijli family’s name had cropped in the PANAMA papers also. Have not come across any such instances of the Inox management . If anyone here at the forum has any information about the Inox management , then please correct me. Action, Thrills All Along The Way

Insistence on the brand ethos of service, luxury and technology as well as customer centricity has stood the company in good stead, , Alok Tandon, Most Valuable CEOs

I have met once in noida.
But had very good and long business relationship with Gujarat fluoro and what you said very correct. Super management. No hanky panky and very dependable.
Other such company that I know is Balaji Amines.
Both are super.

Had both the stocks at one time. Now none.

Any reason as to why you sold off INOX?

Profit booking only. There is no reason.

Just went for a show at INOX Nariman Point. Ordered over Rs.1000 worth of food and wasn’t given a bill. Offered to pay via PayTM initially and they requested to do the payment after the show as they had not ‘input the order in the system’. Ended up paying cash. Went back during the interval to ask for the bill and was told they would send it to my seat. Nothing came.

Anyone else experience this?

If you booked online , check your inbox for feedback mail . You can mention it there. My concerns were addressed same day by the manager of the property . 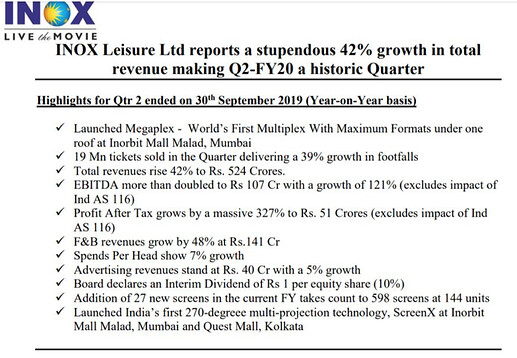 Box office collection and F&B has grown, while Ads revenue has degrown: 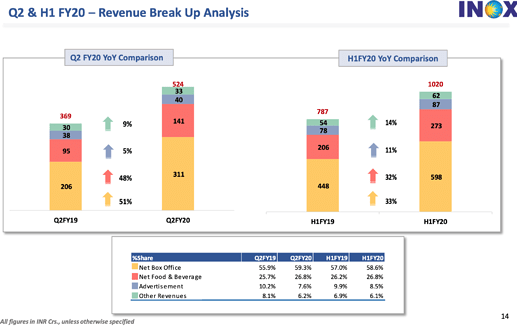 Why multiplex operators luxury gamble may not pay off

Even movie theatre firms are investing in luxury halls, scalability remains a challenge

Are the promoters clean? 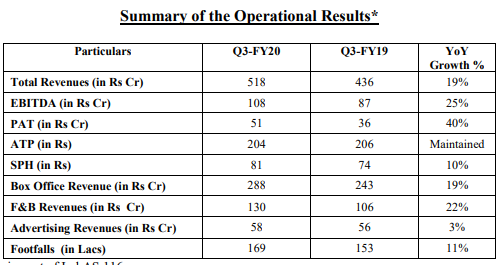 Revenue up for qt3 19% Y0Y and 9month 26%.
Ind AS 116 impacted EBITDA and PAT and as per old method EBITDA up 26% and PAT 40% (for qtr3)
9 Properties and 46 screens added till 16 jan taking total screens to
Total seats available 9196 …
Revenue break up
■ Net Box Office 57%■Net Food & Beverage 26%% ■Advertisement 9% ■Other Revenues7%
Average ticket prices decreased from 206 last year to 199
Footfalls increased from 446 lacs to 532 lacs for 9 months with occupancy @29%(FY20 9months) vs 27% FY19(9month)
6 New properties with 24 screens to be opened next quarter
Last 10 years increased screen agresseivelt from 100 to 600plus
Post FY20 target of 1000plus screen no timeline given
Geopgraphically diversified
Shared movie content pipeline for feb march and April looks good

I have been continuously tracking and investing in inox since 380 level. I was very excited the way results have been ranging from good to v good in last few quarters. Looking at the movie line up in next few quarters i thought inox might be a good add. But it has been falling continuously on the fears of spread of corona virus. just wanted to understand other’s pov here. do u think can it cause such a big harm to film industry that the stock price is almost down 30% from its recent highs. In a country like India where the roads are filled with ppl, i dont know why only inox/pvr/indigo are going down everyday. If there is a rapid spread - it might effect a lot more industries. Views pls.

Market simply doesn’t like any uncertainty. If there’s a smallest of possibility, it will reflect in the price immediately. So in the case of widespread (as the no.of cases are slowly growing), people will avoid travelling, gathering/going out and even may avoid non-veg food products, as the rumour mill also works at the fullest capacity. Adding to that, in cities like Bangalore, IT companies already started issuing WFH advisories, this has taken the fear to the next level. So the market may be pricing a bad quarter.

The immediate impact would be to the industry wherein people gather together like aircraft, cinema, malls, hotels, restaurant, exihibitions, melas,sports meets etc etc. In all advisories in media, the doctor’s state to avoid going to crowded places. U can gauge from the fact that even school’s are being closed for the fear of spread of disease.

We could judge the impact by trying to book tickets (bookmyshow) and checking occupancy level this and coming weekends ( I know how difficult it is to get tickets in my place - Thane).
Disc: Watching and interested in major correction.