Indian Metals & Ferro Alloys (IMFA) is a fully integrated largest ferrochrome producer in India. It has capacity of 275,000 tpa in Odisha with a captive chrome ore mine and coal-based power plant with capacity of 258MW.

Business activity of the firm is primarily functioned through Ferro Alloys and Power segments. The Ferro Alloys segment focuses on Ferrochrome, which imparts the non-corrosive property to stainless steel. The Power segment engages in the generation of electricity and operates on a mixture of coal and furnace off-gas.

The demand for ferrochrome largely depends on the global demand for stainless steel. The Indian ferrochrome industry is oligopolistic, with Balasore Alloy and IMFA controlling over one-third of this market. IMFA is the largest integrated ferrochrome manufacturer in India.

IMFA is the only Indian player with captive chrome ore mines and captive power. As it depends on the export market for around 80% of its production material, IMFA has to compete with South African and Chinese ferrochrome producers in terms of cost effectiveness. With backward integration, IMFA’s production cost matches that of most of the efficient players in South Africa and it is lower from Chinese firms by vast margin as China lacks chrome ore mines.

• Reasonable debt to equity despite considering investments of INR 1200cr in power assets
• FY18-19 RoCE will be >20% due to high margins and lower organic capex requirements
• Global stainless industry is cyclical in nature but IMFA would have sustainable demand as the company enters into long term volume contracts for upto 70% of its production
• The company has a strong balance sheet and domain experience.
• Long term borrowing approximately equal to working capital; Quick Ration of 1:1.16
Cost advantage

Even during such a bad quarter, the company earned an EBIDTA per tonne of close to Rs 11,000 with total cost per tonne at Rs 61,800, which indicates that the company has enough room for improvement due to a significant move in chrome prices. Moreover, the upside is equally important. Anything above its cost means a jump in profits and cash flows. It is for this reason that it would be rather prudent to look at yearly realizations and profits numbers, which tend to relatively stable and provide fair assessment

Fearing a price correction, the stock has fallen from a high of Rs 795 a share to Rs 366 at present. Today its market capitalization at about Rs 988 crore is less than its net worth of Rs 1,246 crore. Even in its worst quarter, it has generated a cash profit of Rs 31 crore, which works out to Rs 124 crore on an annualized basis.

The Price to book ratio is less than 0.75

Quality of Management?
Degree of cyclical risks and vulnerability of input cost volatility?
Whether IMFA will be able to grow inorganically by bidding for FACOR ALLOY?*
Implication of such expansion on long term debts?

PS: Came across edelweiss analysis of the stock and not finding an existing thread initiated one here to seek feedback from learned and experienced friends here 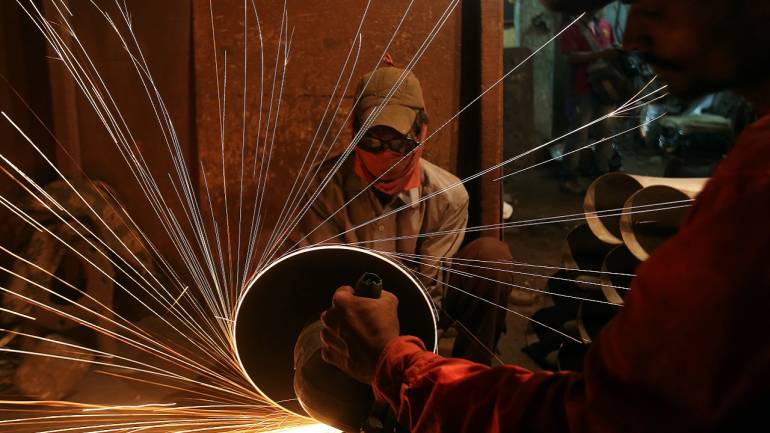 The stock is trading at 8 times its annualised cash profit in one of the worst quarter, which is quite attractive, particularly since chrome prices have moved up.

Industrialist and IMFA founder Bansidhar Panda passes away at 87

Panda is survived by his children, Member of Parliament Baijayant Panda and Subhrakant Panda, Paramita Mahapatra and Nita Ganapati. Pretty well managed company and promoters do not seem like fly by night operators. But the industry is highly cyclical dependent upon global stainless steel production. A bit of political risk is there too as promoters used to share a good equation with the ruling party of Odisha but their relationship has soured of late.

Was tracking the company for last six months and invested around 1% of the portfolio at around Rs. 305 during the recent carnage, the investment rationale being (i) the valuation is highly attractive and the company is one of the lowest cost producers in the world, (ii) the promoters are highly conservative with no ambitious expansion plans which may lead to a debt trap and (iii) lots of ferrochrome capacity is going offline in China due to environmental concerns. https://www.metalbulletin.com/Article/3814108/Ores-and-alloys/CHROME-SNAPSHOT-Chinese-ferro-chrome-prices-bolstered-by-supply-concerns-amid-environmental.html

Disc.: Views are definitely biased. Please do your due diligence before investing.

Does anyone has any idea about the reasons for the fall in topline and margins (severe fall) in Q3 and Q4 FY 2017-18?
i can see an announcement on 18th may about the some issue at one of the sites. But these numbers seems affected by some other reason.

European benchmark price of ferrochrome for Q3 was released today and the price reduction was just 4 cents from Q2 while market was expecting a cut of 15-20 cents. Lets see how IMFA reacts to this news tomorrow.

Corporate Announcement IMFA: A group of agitators have once again disrupted operations at our Therubali plant this morning by preventing workers from entering the premises leading to the shutdown of two furnaces.

We have updated the District Administration about steps taken to fulfil certain demands which were agreed to in a meeting chaired by the District Collector on May 10th following which the previous agitation was called off.

As such, we hope the current situation is resolved soon as it apparently pertains to non-fulfilment of the said demands made earlier https://www.bseindia.com/xml-data/corpfiling/AttachLive/6a501312-15db-4b16-aad1-f3c824a17f87.pdf

This strike was not expected as the company had recently finished a dispute a month back. Jay Pandas closeness to BJP is the major reason why BJD associated politician are causing such disruptions. This will be tricky situation for the Pandas and their ability to manage the disruption till the election will be tested. The cycle clearly is on the up move and they might win Facor Alloy too but if they plants are shut by these agitations, the entire thesis will go for a toss.

I have spoken today with the IR team today and they said that the strike should resolve in a day or two. They are infact hopeful for today. It is not like last time where the strike lasted for 18 days. They will inform the exchanges.

The agitation was called off Friday evening and the plant has resumed production. As per company press release the production loss is around Rs 10 crore.

Still invested in this stock? What is the outlook for the next quarter?

@anubha Yeah I still hold IMFA, around 2% of my pf. At this stage, it can move either way as the future is hazy. Demand is consumption driven, in stead of investment driven like other commodities, so a bit protected in case of global slowdown. Attractive valuation as well as IMFA being among the lowest cost producers give some margin of safety. On the demand side, there is nothing to indicate a demand spike or demand crash.

South African FeCr production is the joker of the pack. If SA produces too much, there would be supply glut and price crash. On the other hand, any disruption in SA production will lead to an immediate price spike.

Corporate governance is not of the highest quality. So it is definitely not a buy and forget stock. Need to keep your eyes and ears open if you hold it or planning to do so.

Icra has improved rating on IMFA from stable to positive today. 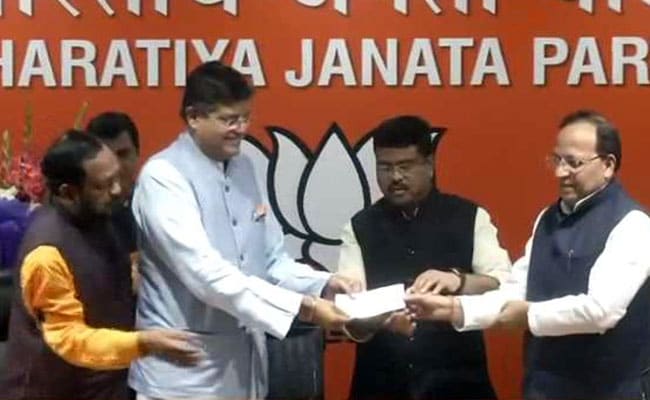 We are pleased to inform you that the Company has entered into a Joint Development Agreement ("JOA") with M/S Adventz Finance Private Limited to develop the property situated at No.44, Chowr

A venture into real estate.

How bad the impact of this international court ruling could be against IMFA?
Any expert comments would be appreciated!!

The impact has already been accounted for in the latest quarter results.

Dear participants kindly share your insights on the stock at the current juncture.

The Committee of Creditors of Ferro Alloys Corporation Ltd have failed to approve any resolution plan offered by five bidders, within the Insolvency and Bankruptcy Code specified 270-day deadline, which ended today. The deadline for Facor gets

The above article states, “REC objected to IMFA’s offer for acquiring only Facor’s manufacturing plant, and not the company and its mines.” Is it still a good buy? Because, if the above article holds true, there is no capacity expansion in near term for IMFA. They are already at their 80-85% cap. utilization since last couple of years.

Also, they are under the transition in their chrome ore mines where their mining pattern will shift from open cast to underground. This will increase the cost. What are the views on that? It takes atleast 7-8 years to extract chromite when shifting from open cast to underground mining.
Lastly, their power cost is around INR3.7/unit out of which they say that the coal cost is around ~2.36/unit. They are not selling the surplus power to GRIDCO as they feel it is unviable. What are the views on that? Why is their power cost so high?

Is it safe to assume INR60-65000/T as the NSR going forward?
Also, kindly share your insights on the MTM forex impact in the books of accounts. They have a net hedge of 20-25% of the revenues. If the current scenario persists, their bottom line will be higher for the next quarter as majority of their revenue book is unhedged, and the rupee depreciation will show a higher MTM. Plz explain how this accounting should be done while preparing a financial model
Thanks. 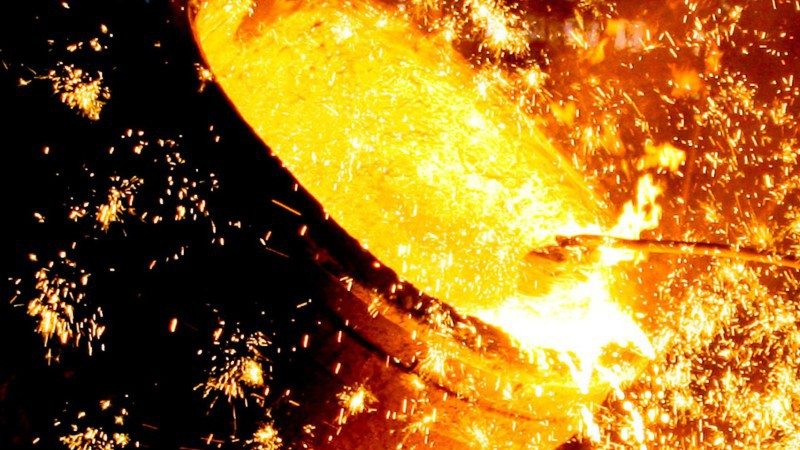 HIGH electricity tariffs, interruptions, and deteriorating conditions in the ferrochrome market have forced Glencore and its joint venture partner, Merafe Resources, to consider restructuring its Rustenburg smelter. As a result, the partners have...

Not just Glencore but also a supply constraint shall be seen from Balasore in near future. As per the news and articles available, Balasore is under a financial stress and this may raise concerns over their near future going concern. The supply glut is seen across the board. But the question is by when the over supply situation will be squeezed out by the ongoing production cuts.