Hi, Can any one help me understand, what makes Kotak bank so lucrative to command a much higher PB as compared to lets’s say even HDFC bank. I agree it is smaller than HDFC however I don’t believe it is as well managed as Hdfc.
Any specific parameter you see that makes Kotak bank to command that valuation.
Is it the ROA vs ROE ratio.
That it is less leveraged and has lesser cost of fund and higher spread. Retail business share. Steady growth, I read higher growth is not always good for banks
However does it makes it that lucrative to command that higher premium.

Just trying to lean, I am very new to investing.
Thankyou in advance.

Should corporates & new banks be teaching IndusInd on how to run the bank?

Sometime back, IndusInd Bank refused to publicly declare its total exposure to the ILFS Group. Fortunately, good sense prevailed, and it disclosed that it had a Rs 2000 cr exposure to the parent company and Rs 1004 cr exposure to the SPVs. There is merit in the argument that the SPV’s are operating companies and the haircut will be minimal, if any.

While it is the prerogative of the bank to decide on the level of provisioning, it is a sad moment for a bank celebrating 25 years of its existence for corporates & newbie banks to guide it on how to run a conservative ship. Indian Banking in next 5 years: Supporting credit for a $ 5Tn Economy while navigating a complex disruption

South Indian Bank was in limelight few years back when some US based investors along with others bought significant stake in the bank.
I am suprising now at 1800cr valuations what are the factors that changed their mind set !
Does South indian Bank will come up with bright future ahead?

Tailwinds for Banking industries in India -repo rate unchanged at 5.15% -RBI have changed the tenure for reverse repo rate for 4.9% which is now 14 days earlier it was for the overnight period now it will be for 14 days. now banks will face pressure to create more loans. Also, Long term repo is for 1 and 3 years corpus will be 1 lakh crore. which basically means Banks can now borrow from RBI @ 5.15 for 1 and 3 years. it seems IDFC first should have to increase its numbers of “Curre…

You can find the SCB till 2019 in https://dbie.rbi.org.in/DBIE/dbie.rbi?site=publications#!4

Here are the industry level notes, for Total Assets, Advances, Deposits and NPA’s, that I created while exploring banking industry. Data for graphs is taken from RBI’s website: 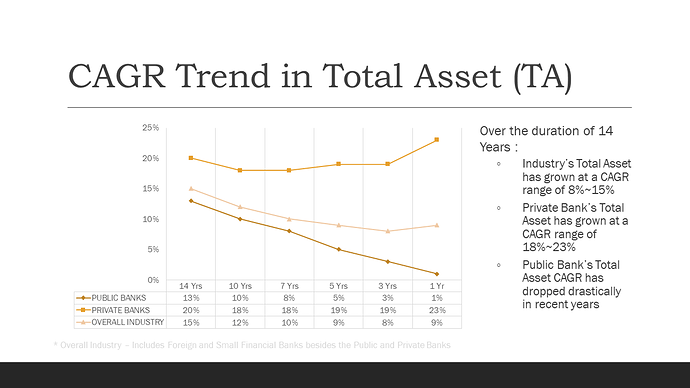 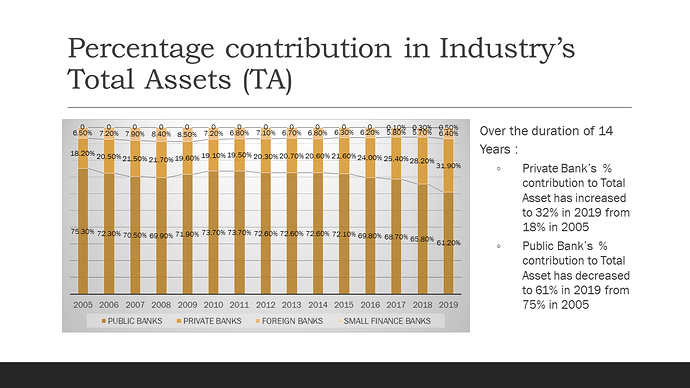 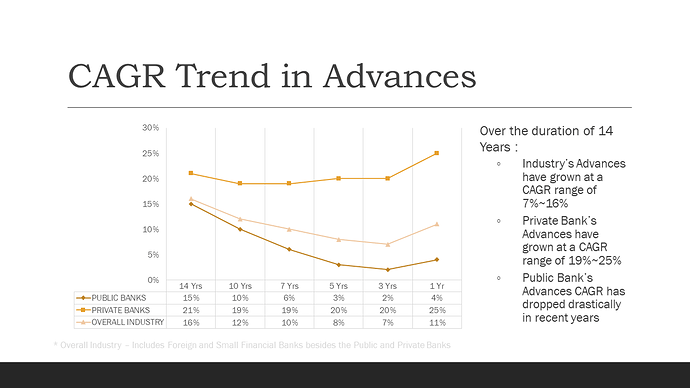 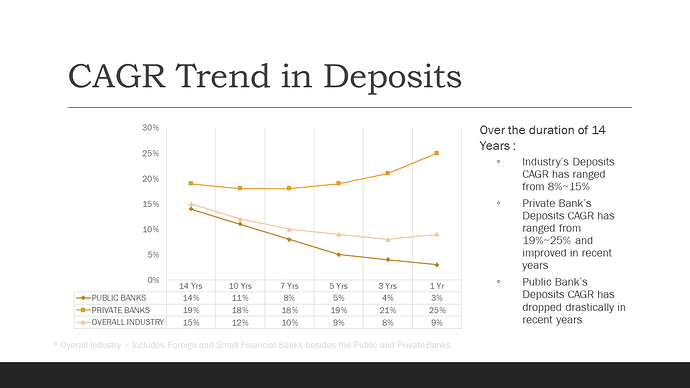 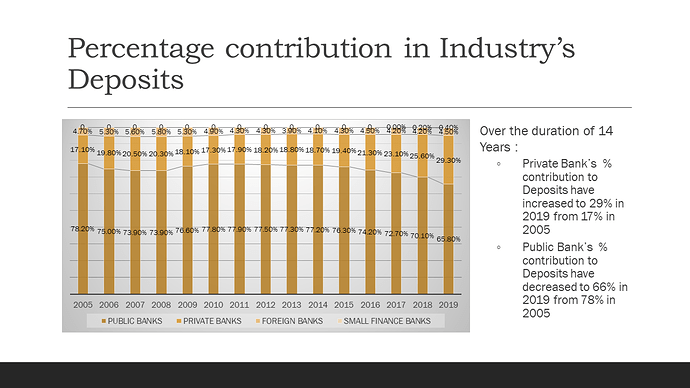 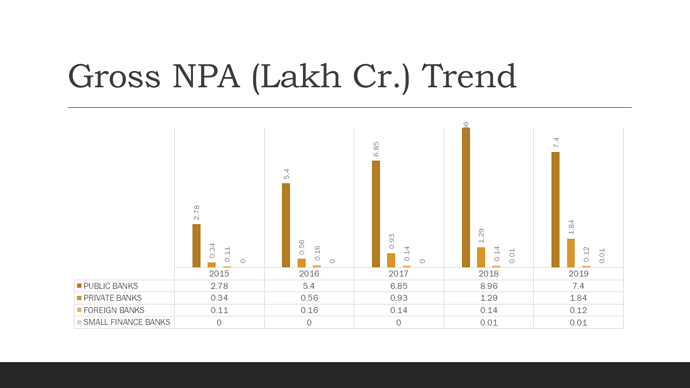 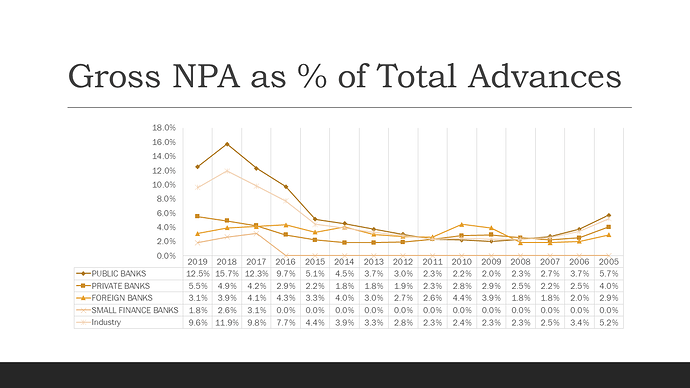 The above analysis directed me to look at the Private Sector Banks. KPI data for ROA, ROE, NIM(%), CASA(%) and Gross NPA(%) for all the banks available in India’s investment universe is as below: 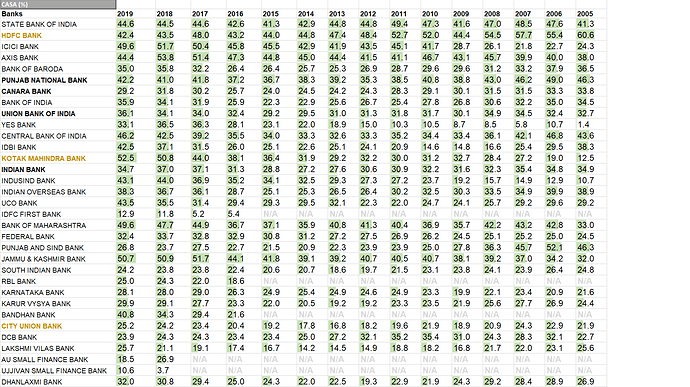 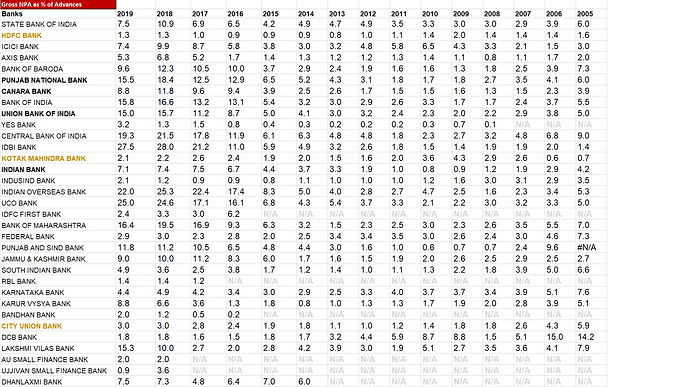 Based on the above data, I plotted the KPI’s of best 6 banks as below- 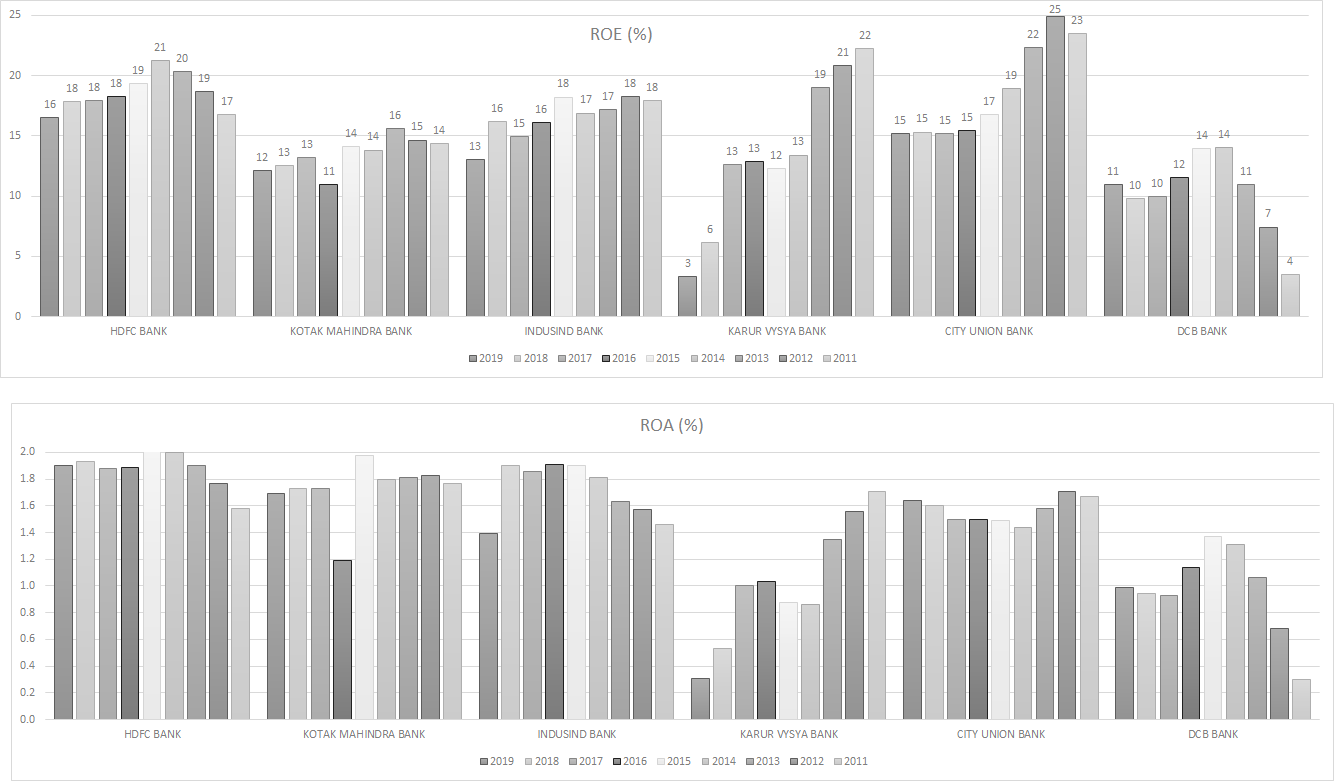 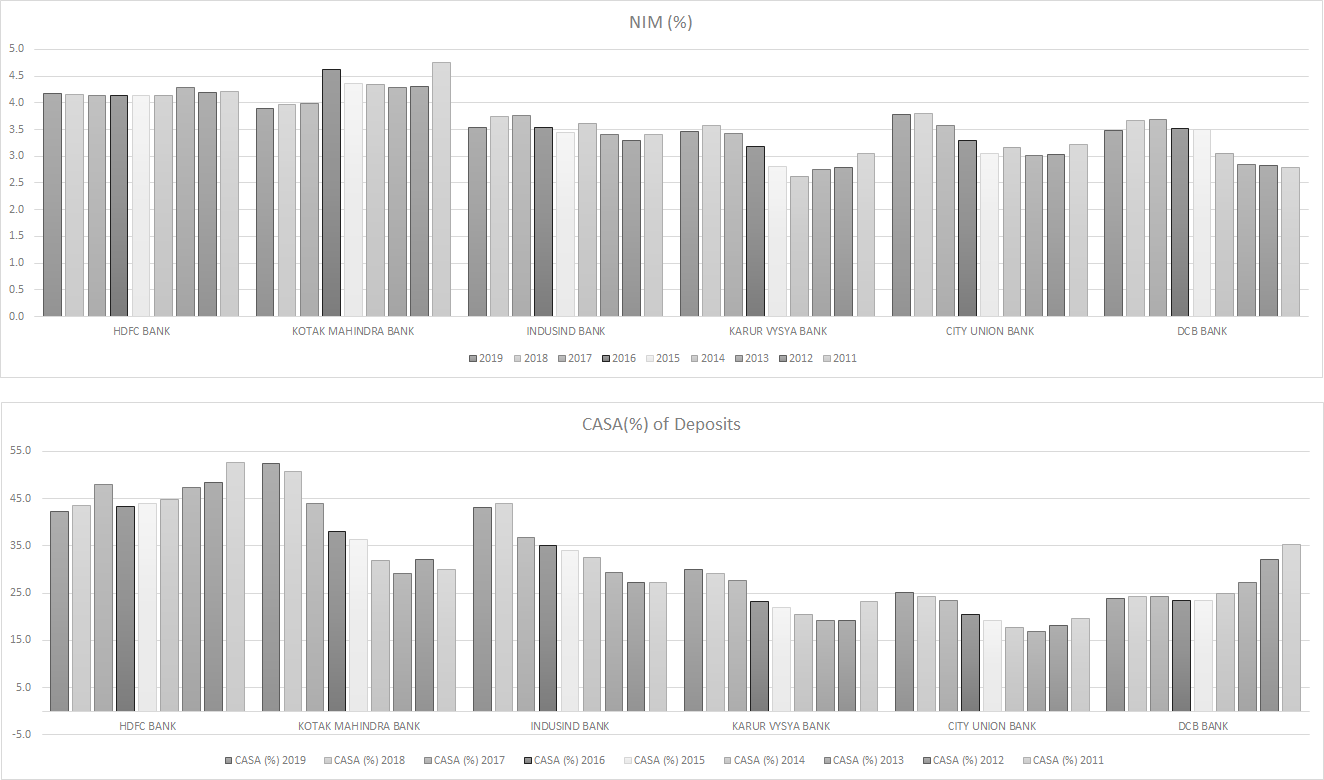 Now, I plan to deep dive into the details of these 6 banks.

Hi. I am getting confused between credit cost, provision levels and NPAs? Can anyone please tell how they are different and interlinked to each other?

This is how I think about this:

Banks are highly leveraged, with an average Asset/Equity ratio of 10/1 that is Debt to Equity ratio of 9/1. A 10% loss on the assets (which are primarily Loans) will make the equity ZERO. Regulatory guidelines mandate the bank to maintain certain threshold of equity w.r.t debt to remain solvent and ready to extend new credit in the economy.

NPAs: Typically these are of two types- Gross NPAs and Net NPAs.

Gross NPAs reflect the amount of LOANS/ADVANCES on which payment is due from past 90 days. Interest income from such accounts is not accumulated in P&L after labeling them as NPAs to avoid reporting of ghost profits, which results in ballooning of equity. The principal amount blocked in such loans belongs to depositors and banks are accountable to repay the same.

Provisioning is the mechanism to back-fill the depositors money from bank’s earnings. Provision is an expense that is deducted from quarterly profits to reduce the Gross NPAs.

Net NPAs (= Gross NPAs- Provisions) is the effective principal amount blocked as NPAs and banks are hopeful to recover the same in subsequent period. If not recovered, P&L will take a charge in the form of Provisions.

Credit Cost: The EXPECTED loss, which varies as per product category, on the LOANS/ADVANCES extended by the bank. Assume a bank that loans money only for one product category- Home Finance, which has a Credit Cost of 1% as per historical norm/ industry standard. The bank has taken deposit of Rs.100 from customers/financial institutions at 5% and plans to earn 4% spread. In order to earn a spread of 4%, the loan to home buyers WILL be extended at 10%.

In nutshell, Credit costs are the losses which were EXPECTED as per managements judgement. Due to poor economy or lenient underwriting, NPAs are the losses that are REALIZED, if no recovery happens. Provisioning is the mechanism to apply realized losses to banks profit/equity in a graceful manner so that the bank’s equity does not reflect irrational exuberance.

Thanks, @Surender . That was useful!

Also, in recent years bank has started reporting its number as per IndAS (previously they were reporting as per IGAAP). If have to compare the numbers (especially provisions & NPAs) of IndAS with IGAAP, any idea how we do that?

Short answer, I do not know.

However, there is no benchmark to say that up to X% of NPAs are OK. As the same regulatory body governs all the banks, inference of NPAs can be derived by relative comparison across banks and observing the trend for an individual bank.

Even if the conversion is possible by any yardstick, the essence of analysis will not change.

I think I was not able to express my question.

I meant, how we can compare the financials of FY2017 (IGAAP) with FY2018 (IndAS) of a same company? As there are few differences in reporting, we have to adjust number to make them comparable

No Idea. Trust others can help.

An interesting report from HDFC Securities 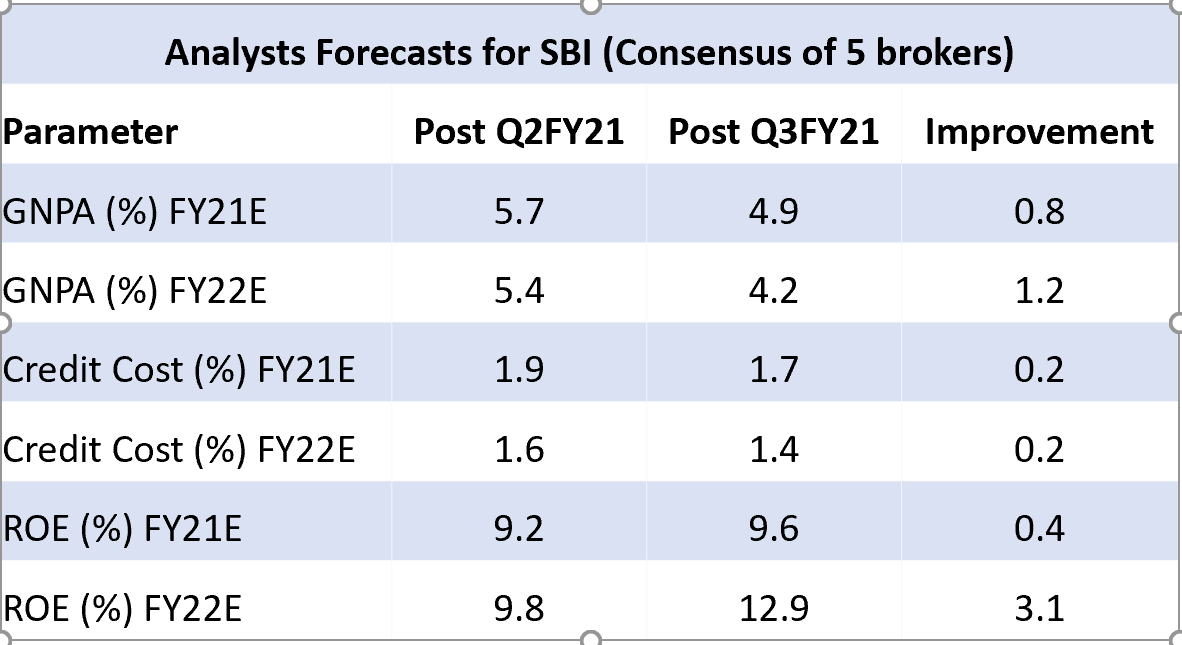 Citigroup to exit retail banking in 13 key markets including India

Citigroup plans to exit retail banking in 13 markets across Asia and the Europe, Middle East and Africa region. The move is part of an ongoing review of the company’s strategy by CEO Jane Fraser, who took over last month