DIsclosure : Recently bought this stock between 80 and 82 and it stands as ~10% of my equity portfolio.

This is a 50 year old company, which has transformed itself from manufacturing industrial meters to one of the top 5 transformer manufacturers in its class of products. Government to push for 24x7 power and upgradation of T&D network will boost demand for transformers.

Below is article from a blog :

IMP Powers Ltd (IMPPL) was incorporated in 1961, Growing from manufacturing Indistrial Meters, to India’s leading manufacturers of various types of Transformers, ranging from 1 MVA to 315 MVA, upto 400 kv Class with target of taking this production capacity upto 500 MVA., Today the company is amongst the Top 5 power transformer companies in India, in the 132 – 220 kv class.

IMPPL has well equipped Manufacturing Unit at Silvassa spread across 4 Acres, factory floor area for 1 Lakh Sq Ft Built up (Thus enjoying location advantage of close to National Highway and 3 Ports), for manufacturing the entire range of Transformers with an installed capacity of 12,000 MVA per annum, which is backed by in-house Design Center, R&D and own Impulse Testing facility upto 400 kva, which is accredited by NABL, (Department of Science & Technology, Government of India.)

The company is an approved Class ‘A’ supplier to all SEBs and other Government Agencies such as PGCIL, NTPC, NHPC & DVC. Non SEB customers include EPC companies, leading Consultants and other industrial players with whom IMPPL enjoys Preferred Vendors status.

IMPPL with a 5 decades of experience, has about 30,000 installations / Customer base which is spread across India and in about 26 countries across the world, catering the requirements of Utilities, SEB, PSUs and Private Industries. Some of the Clients are listed as below :

International : UK, African Continent, Asia and to the farthest corners and difficult terrains of Austrailia and New Zealand

In India, the demand for equipment used in power sector is multiplying at a rapid rate because of social, economic and industrial development. The new government plans to fund up to 75% of the investment required to supply electricity through separate feeders for agricultural and rural domestic consumption, which will benefit the Power Sector Companies and ultimately boost the regional demand for power transformers. The government’s commitment to provide 24x7 uninterrupted power supply to all homes and Deendayal Upadhyaya Gram Jyoti Yojana to augment power supply to rural areas, strengthen the sub-transmission and distribution systems will ultimately boost the demand for Power Transformers.

The Transformer market revenues in India are expected to grow at the CAGR of 14 % till 2018. Under the 12th five year plan (2012-2017), the government plans to spend 200 billion on developing and strengthening power infrastructure in India. The Indian government expects to add another 85,000 MW of power capacity during the 12th Five-Year Plan (2012-2017) period. The demand for power Transformers is also expected to go up as a direct consequence. Government’s attempt of attaining 100% electrification across the country by 2017 would contribute to the demand for power transformers. With the continuous support from the government to promote the power transformer industry through investments, tax benefits, subsidies, etc. will help the industry to grow over the coming years. With the upswing demand for reliable power in the country, the transformer market is witnessing a growth trend.

Company has idle plot of 20,000 Sq.Ft. at Kandivali west, the value of which should be not less than 60 Crores, if sold on outright basis, if develop & sold by the company, it can fetch a sale consideration anywhere between 80 to 100 Crore, depending on the project.

IMPPL is the only transformer company in India which is entitled for Sales Tax Exemption till 2017, such benefit will provide a significant price advantage to the company.

IMP Energy Ltd (IEL), a subsidiary company of IMPPL, incorporated in the year 2012, is acting as a Project Management Consultancy (PMC) to explore emerging opportunities in mini and small hydro power projects upto 25 MW. IEL received 13 small Hydro projects orders totaling 12.7 MW & amounting to Rs 137 Cr in Leh & Kargil, the progress of which is extremely encouraging. There may be value unlocking going forward, by listing this PMC subsidiary at rich valuations.

Falling in Input Prices of raw material such as Copper, Aluminium, Steel Stampings, Crude Oil (Transformer Oil), etc, will directly add to the bottom line of the company. Fall in interest rates will reduce the interest burden of the company.

The company has done CAPEX during tough times, the benefit of which will be seen going forward.

This Rs 10 paid up stock is trading at 0.8 times of book value of Rs 116.75 (Industry Price to Book Value 2.51), With FY 15 sales at 330 Cr and current Market Cap of only 70 Cr, its trading at Market Cap to Sales Ratio of ridiculously low of just 0.25 times. The company has turned around in last 3 quarters by making profit of Rs 6.43 Cr, giving EPS of Rs. 7.7 per share, making this stock so far the cheapest profit making company within the industry with a P/E of just 8.5 times (Industry PE of 68.63), if we add June 15 quarter EPS of 3, making this stock a great value pick among the high growth power sector with a modest target of 140 in the next 12 months.

Promoters recently allotted 500000 (5 Lakhs) shares to themselves at Rs 80 per share on Preferential basis, thus increase the stake in the company by a whopping 6% indirectly.

Thanks for the thread. Would be interesting to know how it stands in comparison with TRIL

Just for the information of the members, IMP Powers Limited is not in to EPC of the Power T&D. The company is only in to Transformer manufacturing. The attached presentation will give you some insights in to the company.

Btw, the promoter group of IMP Powers Limited and Mangalam Drugs & Organics Limited are the same.

Presentation of IMP Powers as on June 2015

Bharat Bijlee, a co, in same sector announced its quarterly numbers as below :-

There are improvement signs.
for e.g. the RM cost are reduced…need to see more in coming quarters

Debts are not big.

If you believe this is an good stock to add and hold then its at very good valuation given that recent growth it has shown and capex it has done. 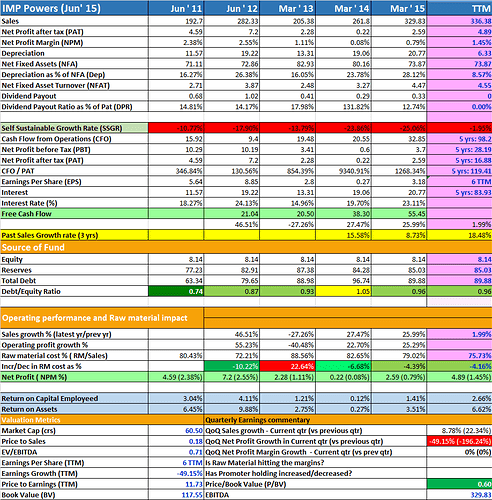 Yes, given the fact that India has highest percentage of transformer failure of 15-20% where as in developed nations its 2%. Most of it is attribute to the low standards steel used. I believe gov. and or customer will wake up to this fact and take preventive action which simply means ordering from quality companies. I believe IMP Powers exports its product which may have good international quality.

I am yet to study the quality of the product of IMP.

IMP Powers paid 25Cr interest on total debt of 97Cr on balance sheet, this is 24.7% rate of interest. Any views on this high interest cost?

Usually transformer companies opens a LoC for EPC players behalf of them that results into higher interest costs with respect to debt. This practice is adopted in order to increase the top line. You observe similar things in TRIL financials too.

Few observations on IMP Powers:
IMP belongs to Dhoot Family (Videocon Group). They have a poor track record to reward shareholders historically.
Important Note: We got feedback from competitor one of big investment banker has received mandate to sell whole business, as management want to exit from this business.*
Unlike TRIL (upto 765 kV), IMP operates in 33kV to 220 kV segment similar to Bharat Bijlee where competition is quite high. Bharat Bijlee has not performed from last 2 quarters and gave a tepid outlook.
Working Capital is 110 days, in order to grow topline, the company need incremental debt. Already company has high debt in BS.

This is high risk and low return bet.

Hi Ankush, are you quite sure that this Dhoot family is same as videocon promoter Dhoot? This is the promoter of Mangalam Drugs… Also, what were you indicating with the mention of selling the business? Didnt quite come out clearly… Pls elaborate

Dhoot of IMP Power are promoter of Mangalam Drugs not Videocon group.

Company have land bank in Mumbai around 1 acre worth 60 cr & if management is trying to sell this business.This is positive for shareholders as value unlocking will take place but i doubt this news of selling Transformer business.

Val Advisior’ Analyst gave me feedback about promoters that belong to Videocon Group. However, I have attended AGM of one of IMP competitors there I received information that company has given mandate to sell Transformer Business.

There are no entry barriers in transformer businesses, however cycle is in upturn move due to demand from State Transcoms and two central sposored schemes IPDS+DDUJY. I prefer look Voltamp with zero debt in BS and diversified portfolio. IMP Powers Ltd has received an order for 1,920 MVA of 160 MVA, 230 KV power transformers from Tamil Nadu Transmission Corporation. The total order value is Rs 62 crore. In an interview to CNBC-TV18, Aaditya R Dhoot, Joint MD of the company spoke...

Seems interesting given that we have seen some turnaround happening in the transformers sector visible in last few results of TRIL. Let’s see how this pans out.

Anybody knows about the increasing Contingency Liabilities? 22 crores out of 174 crores liabilities is for IMP Energy. What the rest amount for?

Secondly, the 24+% interest rate that they pay for their 94 crores debts?

Have written to promoters, no reply as of yet. will share if I get reply

Looks like 150 cr is guarantees provided by Banks to IMPs customers and suppliers. Most of these are GOEs and this doesn’t look uncommon to me. Break-up is provided in the Care rating report- c.90 cr is LC limit and 150cr is long term guarantee limits.

In past they have overdrawn LC limits (not sure how its possible) and were moved to default rating. Also, they are pretty tight on working cap.

Had a look at Transformer and Rectifier, they have got contingent liabilities of approx 480cr.

On interest, they have a long payment cycle to suppliers, in line with their working capital need. They must be paying interest to suppliers and to my understanding (I could be wrong!), interest expense on the statement would include this interest to suppliers; and thus it looks on higher side. Also, pls do add expenses related to LC and Guarantees in your calcs.

Invested at higher levels- c. RS 120 and still holding on. If June quarter goes good (they just stay in black), optically it will become very cheap in terms of PE and might see good jump thereafter. Also, promoter issuing warrants, indicates they are hopeful of some upside.

While we look at IMP through all the angles, do look at peer set; companies doing similar revenues are valued in multiples of IMP, given concerns on working cap and interest eating away almost all the profit (which at EBITDA level is really good). To me this looks like a LBO kind bet, with potential for huge upside or downside; and lack of liquidity makes the swing worse. One needs really strong stomach here.