How to identify great companies - 1x to 10x

How to identify great companies:

Warning: It’s next to impossible to exactly pinpoint great companies. It’s easy to do so in hindsight. Said so that should not prevent us to study what makes companies great. This is a work in progress.

Source from the book: Great by Choice by Jim Collins (Also other books Good to Great by the same author).
In the book, the author defined great companies or 10x companies as outliers vs competitors in the same industries for the same period. Then they studied 10x and competitors and identified characters of 10 x companies.

If we study in a similar line for the Indian contest, 10x co is defined as significantly higher in Revenue, Profit and Market Cap with a history of 10-15 years Vs their close competitor.

As per my opinion, we have the following 10x companies.
Divis, L & T, Bajaj Finance, Titan, Indigo airlines and HDFC. 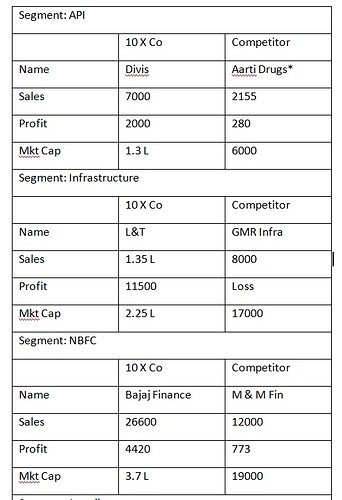 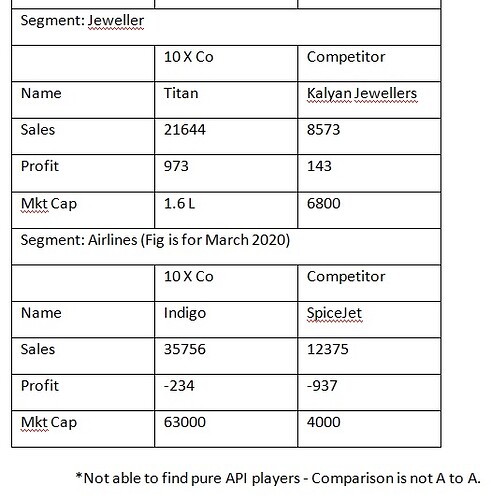 I tried to studies those companies and try to find common characteristics.

Stands for: Trust, vision and Hardworking
When Dr. Divi move out from Dr reddy’s Lab, some 100+ people also resigned and joined him. He didn’t enter into a formulation as he values trust more and doesn’t want to compete with innovators.

Much detail is not available for Dr Divis. He falls into the leader 5 category.

How do you balance the fact that you don’t take a large enough risk that will shut the company down, but you take a lot of small and medium risks because otherwise, you’re never pushing the boundaries of what is ordinary, to do something extraordinary.
Bajaj says he is personally involved in HR.

For example, the airline stocks no hot food on board and has no loyalty program (only adds to costs, he insists). Not to launch with old, leased planes. But we didn’t want to cut any corners on quality The Company not only had to pay a down payment of just 4%, but also received a 40% discount on list price for placing an order for 100 aircraft.

IndiGo saves fuel by using different ways. First, they use software to optimize flight planning for minimum fuel burning routes and altitudes, and also use latest fuel saving technology. Second, Indigo has inducted Airbus A320neo family to their fleet, which claims to deliver 15% less fuel consumption and 8% lower operating costs. The company is also involved in Fuel hedging after the government allowed it in 2007.

And IndiGo also has the aircraft taxi to the terminal with one engine, shutting down the second engine to save fuel. This moderates the aeroplane’s speed in the air and saves fuel.

Titan entered 11 European markets—opening offices in London and Paris—with steel quartz watches. It hired European designers and roped in a London advertising agency, leading to a huge debt pileup. “We had no idea that the ‘Made in India’ tag would be such a negative,” says Bhat. “Since then, we’ve always done a pilot before large-scale rollouts.

every month we have to generate cash and not just brand image,” he says. “We have to buy less and sell more. Keep less inventory.”

He has the habit of gifting miniature yellow signboards to colleagues and business associates. The little yellow signboard has compliance written on it, with a sketch of a slippery slope below it.

Conclusion: All those companies have incredible managers (CEO). Hence to date story of companies is equivalent to the story of CEO.

This is a work in progress. You may join, comment, suggest…

I don’t have the necessary experience to make any kind of statements with multibaggers. But I think something external has to happen apart from what is happening with a company. There have to be some external factors, tailwinds so to speak which propelled the company to become highly successful, factors even the companies might not have imagined.

Sunrise sectors - Although the first movers will not always become big, in fact if the theme does not play out properly the first mover may even go busy. Always risky to be in a business which no one is in. With limited capital, why would I want to bet my house, if the outcome is a coin toss.

Change in trends - The availability of certain goods or the availability of better goods are what people are after and a company which first senses these changes and offers products which with network effect creates a moat, the moat becomes wide and finally the company becomes a household name. These trends have to sustain and spread and should not be fads. In order for the trends to reach a wide scale, I think the products should be available to all classes, like FMCG. If they are novelty items, the reach will be limited. Trends may start for any reason, but the spread happens only when majority wants to be a part of it. Generic to branded plays are examples.

Policy changes - The changes are to be continued by the next regimes. If a theme starts and is given importance and if the policy changes with the change of power, some promising companies may stop moving. The incentives have to be carried out the same, if not get increased for a decade or so to see visible changes.

Technological changes - Unless one comes with a differentiating product or service that is not available elsewhere one cannot command a premium price. To an extent I don’t think this quality of innovation remains forever unless it the part of the thinking, part of the DNA, so to speak. Success or failure, one keeps on experimenting, and becomes bigger with successful endeavor, as time passes. Google, Amazon I think are examples.

Consolidation - This happens over the course of decades sometimes. A lot of companies have to be out of the business for various independent reasons and give the chance for the big to become bigger. A small innovative company will always be a threat, will always make a dent to the big ones, and gain market share and become big soon, so the big ones despite big have to be nimble. Bajaj Finance comes to mind, who would have thought that you get a loan when purchasing an item from a store where you have never been to before. To get a loan, you have to go to a bank.

It is one thing to see multibaggers begin and become right in front of our eyes, and it is another thing to invest at the beginning and follow the company for years to experience. It takes a lot of things to have such an experience, as we know, including luck.

Just my thoughts and I am yet to experience a lot of what was said above.

Great by @ChaitanyaC. Agree with your thoughts on finding multi beggar or consistent compounded.

Said so the topic is slightly different, here we are discussing great companies - they are great or outlier not only because of the points you mentioned like sunrise sectors, trend change etc. Their competitors in the same sector also got the same benefits. E.g. Bajaj Finance vs M&M F or L&T F; but why BF outlier? What is in their culture? What has different strategies or innovation done by BF? Same with titan, where most players are struggling like PC Jewel or Kalyan etc. Vs titan is flying. What’s the reason?

I recommend reading a book by Jim Collins. Thanks again for adding value to the discussion.