Unique Business Model :- What I mostly like about this story is their unique scalable business model.

HCG is following a cluster based growth model.

[Disclosure :- Invested 30% of my portfolio . Hence views might be biased ]

Doesnt the valuation looks too stretched?

Yes it does but it has always been the story from IPO moreover in the recent downturn the valuation remain stretched . Considering the value unlocking from their existing setup I think the valuation is quite justified.

Thanks for starting this thread.

There are many detailed point shared in AR and one must see.
It looks like a long term story if executed well as you added in your notes.

I am skeptical about the local tie-ups.Generally if we see people around us - people try to go best and specialty hospital specially for oncology.A general healthcare hospital like they have in amdabad might be fine but for oncology local tie-ups might be looked down.I would be keen to watch the performance of other centers going ahead.

I invested little amount for tracking and would be interested in more information.

As per the company the local tieup they are only having with most reputed oncologist. So It is understandable that it will be a both way beneficial and this space is now overcrowded with patients so I don’t think there is any risk with local tie up.

About the Ahmadabad mulispecialty hospital they are planning to convert it to a CCC.

Valuation is definitely stretched but one need to understand the niche space this company is operating on and large longterm scope for value unlocking . Hence in my opinion this valuation is quite justified. Though need some opposite views to understand if I am missing out anything in this part.

thanks for the response - when you say valuations are stretched - what are you looking at? It will help me understand it better.

Well I believe everyone is considering the PE here for valuation but in my opinion it should be based on Enterprise Value and what I have got here is 22.4 . So very much reasonable for me. And also you can find a historical PE downtrend with the EBITDA margin improvement and as soon as the CCC become profitable we can see more downturn in PE. Also the Price to sales ratio is at 3 so if I go by most conservative estimate of sales growth of 15% then also this valuation seems very much justified to me. 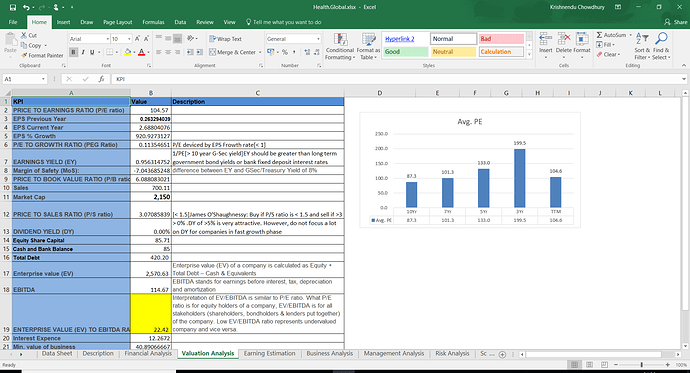 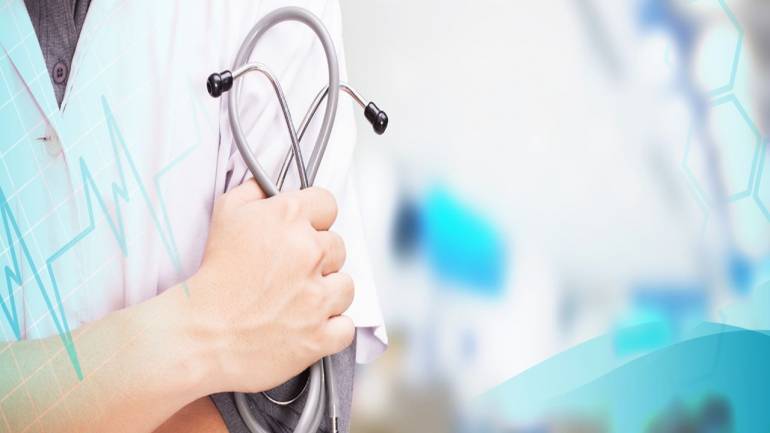 Healthcare Global rises 3% on allotment of equity shares to promoter

The company approved the allotment of 9,34,500 equity shares at Rs 321 per share on preferential basis to M. Gopichand, one of the promoters of the company, for consideration other than cash.

Clear and unambiguous communication between team members is an essential component of any surgical environment. It’s particularly important – and indeed particularly challenging – in catheterisation (cath) labs and electrophysiology (EP) labs where...

Mohnish Pabrai had placed a significant bet on this . I like his investment thesis . I guess he sees something in this business which is not clearly visible , at least to me .

In my opinion the valuation should be considered on EV TO EBITDA [which is similar to PE ] basis along with Price to Sales ratio. Both of which I have explained earlier.

Top notch investors PermijiInvest, Temasek and IDFC are invested here during their journey and lot of fund houses invested now. 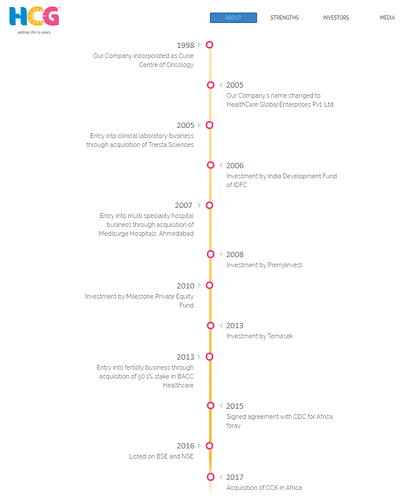 I think here the story is more on the jockey and high growth - under served Cancer and Fertility treatment businesses, off-course asset light business model, partnership with local doctors.

Key Risk: They have grown mostly by InOrganic way of Acquisition mode, any one wrong step in future will spoil the story.

Dr. Kamini A. Rao is a pioneer in the field of Assisted Reproduction in India. She has specialized in reproductive endocrinology, ovarian physiology and assisted reproductive technology and has been awarded the Padma Sri, one of India’s highest civilian awards. Dr. Kamini A. Rao is the Medical Director at Milann – Centre for Reproductive Medicine (A Unit of BACC Healthcare Pvt. Ltd.). Her early education was at Bishop Cotton Girls' High School, Bangalore and she started studying medicine in St....

I haven’t given much information about them because they are very renounced personality also many information is available in public domain . The only concern is about the valuation I guess here regarding the 130 P.E. But as I have mentioned it is trading at 22 EV/EBITDA and 3 times of it’s Sales and with continuous decreasing P.E. as the CCCs gradually becoming profitable. And once all the CCC will become profitable it will be a Cash Cow. considering this facts I have invested 30% of my Portfolio hence view might be biased.

Cheap treatment should be replaced by value based healthcare: Dr. B.S Ajaikumar...

A poor man should get the right treatment in the first time because he has only one chance.

@KC1986
First of all thank you for starting this thread.

For me the following are the negative facators

On the positive side CFO is pretty good .

See I always have mentioned that valuation is a concern but different investment philosophy is having different way to assert into it. I have been tracking this company since their IPO and all the time it’s valuation kept myself away from this stock . But when the Indexes were corrected a lot in recent times but Market is willing to give it a high PE. This boost my confidence and I only have invested recently. Also the Company board has approved almost 9.34 lac share to the Promoter at a price of 321.

I just tried to a comparison between Fortis and HCG. I understand both are into different specialties.But i just wanted to compare it a very high level basis.

So Fortis has 6 times more bed capacity than HCG if we ignore all other factors market cap of Fortis should be 2700 crore (HCG MCap) * 6 which is close to 16000 crores.

Now let us look at other factors - Average revenue per bed (ARBOP) of HCG is rs 30598 and that of Fortis is 36000. The occupancy rate percentage of HCG is 50% and that of Fortis is 72. So even if you consider HCG is into very specialized offering it might take a year to catch up with Fortis metrics. So Fortis fares better on these metrics.

The bids for Fortis has come around 160 rupees which gives it a market cap of 8200.

So either Fortis is highly undervalued or HCG is overvalued. Let me know if i am missing anything.

Hi
Here, I feel we have to give weightage to perceptions on management also which is a huge factor on future performance and valuation.
Kind Regards
Jose