Gujarat Ambuja Exports Limited (GAEL) based out of Ahmedabad has three major division:

The company was promoted by Late Mr. Vijay Gupta and now his son, Mr. Manish Gupta (after exit of Mr. Manish Gupta’s brother, Mr. Mohit Gupta) is the main promoter. Mr. Manish Gupta has been involved in the company for more than 2 decades now. The most attractive segment amongst the three segments is maize processing where GAEL is the largest player in India with market share of more than 20%.

GAEL is the largest and most efficient maize processing company in India with installed capacity of 3,000 tonnes per day (TPD). Over the years, in the maize processing segment, the company has grown its revenues from Rs.123 crore during FY07 to Rs.1971 crore in FY20. The company has far left behind other competitors like Sukhjit Starch (one of the oldest maize processors in the company with history of 75 years), Roquette Riddhi Siddhi Pvt. Ltd (the second largest player in the industry) and Gulshan Polyols Ltd. The company manufactures starch and its various derivatives like liquid glucose, sorbitol, dextrose anhydrous, dextrose monohydrate, maltodextrin and high fructose corn syrup.

The major uses and competitors in the starch and its derivatives segment is tabulated below: 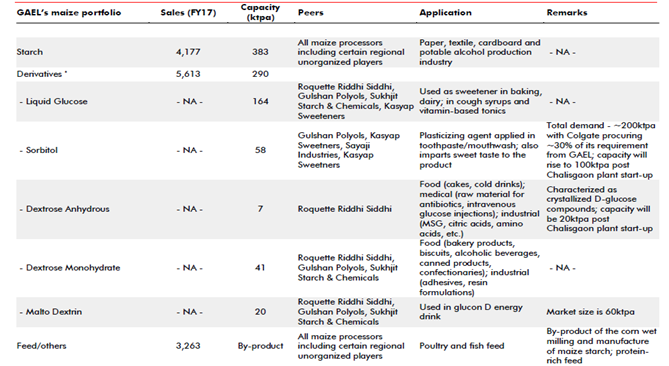 Starch and liquid glucose are commodity products while other value added derivatives higher profitability margins and some entry barriers. The company has clients like Heinz India Pvt Ltd, Asian Paints, Nestle, Colgate, Mondelez (Cadburys), Dabur India, Patanjali etc as its customers.
The company has deployed most of its cash flows generated by it in expanding the capacities of Maize processing plant only as the other two segments have volatile margins and low returns. The company has four plants located at Himmatnagar (500 tpd) in Gujarat, Sitarganj (750 tpd) in Uttarakhand, Hubli (750 tpd) in Karnataka and Chalisgaon (1,000 tpd) in Maharashtra. The commercialisation of Chalisgaon plant happened only in Q4FY18. The same has resulted in company’s revenue growing from Rs.1350 crore in FY18 to Rs.1971 crore in FY20. Furthermore, the phase II expansion for Chalisgaon is value added derivatives was completed in FY20 only. Furthermore, the company is also setting up its 5th maize processing plant at Malta, West Bengal with total capacity of 1,000 tpd and cost of Rs.300 crore. The new plant is expected to cater to the eastern markets along with export opportunities in south east Asia. The plant is expected to be completed by second half of FY22. The timelines and cost of various plants is given below:

Some details of the key competitors, size and key products is tabulated below: 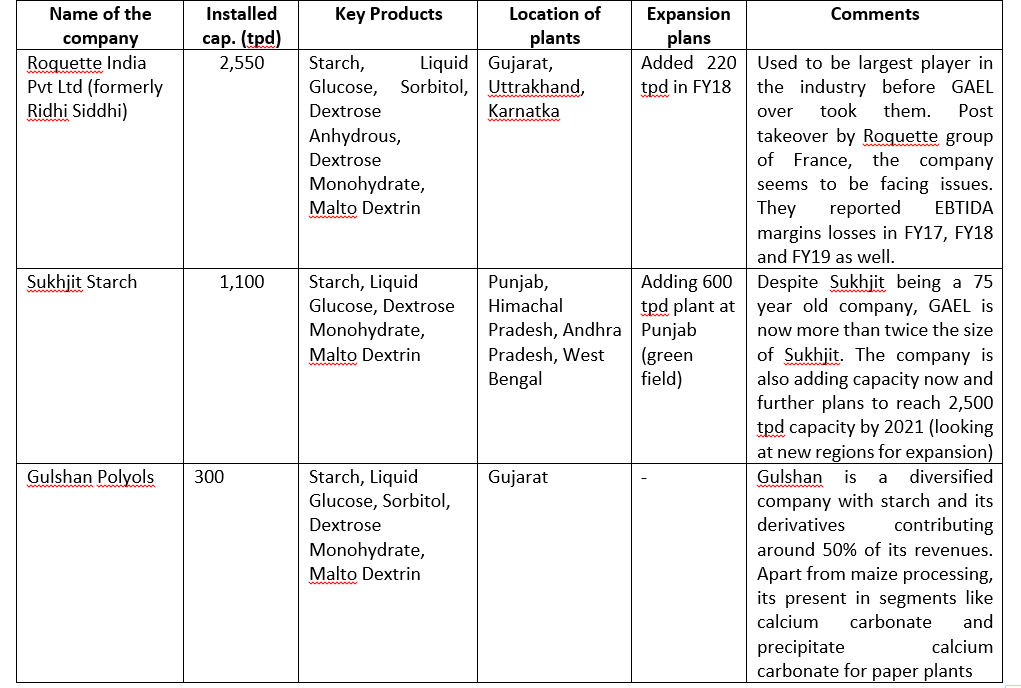 Apart from the companies mentioned in the table, other players with smaller capacities in maize processing include Cargill India, Sayaji Industries, HL Agro. Unorganized players still control 30 – 40% of the market.

What are the entry barriers or competitive advantage in maize processing operations of GAEL?

Performance of maize division over the years

FY20 performance was impacted by significant increases in prices of maize which touched Rs.22 per kg as compared to last decade’s average prices of Rs.12 – 15 per kg. The prices increased on account of pest attack of army worm which impacted the acreage of maize in FY20. The same led to decadal low margins of 8.65% in PBIT for maize segment. The maize prices have now come back to Rs.12 – 13 per kg currently.

GAEL has the second largest soybean crushing capacity in India with six plants located across Gujarat, Madhya Pradesh and Maharashtra with combined capacity of 4,600 tpd. It also has an edible oil refineries and plants with capacity of 1200 tpd and also has some capacity for wheat milling. The solvent extraction and refining activity complement each other. For 100 tons of soybean crush, ~82 tons of de-oiled cake (DOC) and ~18 tons of crude oil is extracted. The crude oil is used as an input in refineries. The segment has highly volatile margins on account of various local and global factors including sowing of soybean, prices of DOC in export markets (as its primarily exported), duties between India and other countries and local and global oil prices.

The company has not made any major capex in the segment since FY10 as it is operating at low capacity utilisation and has high volatility. Solvent extraction plant has operated at 25% capacity utilization while refinery plant has operated at 20% capacity utilisation. The segment reported losses/low margins during FY15 and FY16 on account of crash in prices of DOC in global markets. However, the segment has shown some improvement in the margins from FY17 onwards. Management has clearly stated that they will not work for losses in the segment over the medium to long term.

Performance of the agro processing segment over the years

Performance of the agro processing segment over the years:

Company’s working capital cycle has remained around 70 – 80 days over the past few years. Most of the working capital is stuck in inventory while receivables days are under control.

What attracts us to the company?

The company is trading at 11.85 times P/E and 6 times EV/EBITDA based on trailing twelve months earnings. However, the company’s profitability margins in the maize segment are lowest in past decade .

Inherent volatility in the business: One would have to take a long term call on the business as quarterly results might fluctuate.

Key takeaway for me was that maize margins might bounce back to normal levels in this financial year and soya might also see improvement in performance.