I am a novice and this is my first post here. So pardon me if this looks very immature.

Buisness : Construction of Telco towers. Rent collected from tenanacy by telcos is the main revenue.

Could anyone please share thier views on GTL Infra ?

Hi, here are my views/notes on the company which i had prepared a fortnight back. In my opinion, past history has resulted in depressed valuations and if a new investor comes in, it can result in valuation rerating as well as improved business performance.

GTL infra is a beneficiary of the ongoing consolidation in the telecom as well as telecom tower business in India. The company has 27800 towers in 22 telecom circles in India. It went into CDR in year 2011 and last year it was referred to SDR. It has recently completed merger with CNIL as a part of SDR process, and post which total debt stands at Rs4800cr with FY17 EBITDA of Rs1200crs. The company is looking to refinance its debt which may result in lower interest outgo to the tune of Rs100-150cr going foward.

Debt reduction journey: In the tower business, the debt (on a combined basis of GTL Infrastructure Limited and Chennai Network Infrastructure Limited) has come down from a peak level of Rs13,318 crores (US$ 2054 Mn.) at the time of CDR to Rs4,841 crores (US$ 747 Mn.) in April 2017. It is expected to further go down to ` 3,840 crores (US$ 592 Mn.) by 2019. This represents a staggering reduction of 71% on an absolute basis. The company achieved this by reducing promoter shareholding in combined entity from 80% down to 20% post SDR (assuming full conversion of Convertible Bonds). Currently, the company is looking at finding a suitor which can buy controlling stake in the company.

Recent deal in telecom tower space: ATC bought 20000 towers of Vodafone Idea for US$1.2bn, valuing the company at Rs39lakh per tower with tenancy ratio of 1.4. GTL has a much better tenancy ratio at 2.0x and hence we expect the company to get much higher valuation for its towers.

Key drivers: Given higher competition in the industry to expand its 4G reach and expected 5G rollout, I believe that the requirement for towers is likely to increase manifold. Reliance JIO has mentioned earlier that they will require 1 lakh towers for its subscribers. Moreover, very high free cash flows will ensure faster debt reduction for the company and the management has envisaged that the company will be debt free in 3-4 years.

Valuation: the stock is currently trading at 3.7x FY19 EV/EBITDA. I have done the valuation based on asset based as well as earnings based method. I am getting upside of 130%-210% in this stock assuming conservative estimates. If a new buyer is coming in, it can have substantial rerating in my opinion. I am attaching a picture of financials along with this msg. 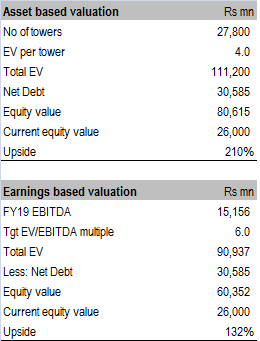 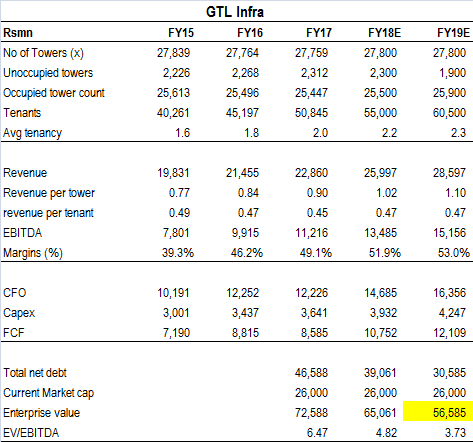 Thanks, Mangeshab for your analysis. However, can you please explain the assumption taken to calculate the value of the company. I have not done developed any financial model to evaluate the cash flow/company value but I see the recent events which made me interested in the company. One of the bigger positive triggers for me is the interest expressed by the Bain and Piramal group - both with the reputation of identifying the value of the assets. the current promoter - he appears to be a genuine person - and the company suffered not from the mismanagement but from the change in the industry circumstances. The company has been able to reduce the operating cost - I believe it has one of the lowest operating cost per tower in the industry if you read what employee says about the organisation - despite recognising that pay has not been good but they have positive things to say about the company. Generally, you see companies which are facing financial challenges, delayed salaries as one of the common feature - very easy option for management. However, in the case of GTL, despite financial trouble and the current climate of Telecom industry, GTL management can easy delay/skip the salaries of the employees - however, the company has been paying salaries on time. That kind of indicates management/promoter value people and is ethical. Secondly, company recently cleary forensic audit indicating no fradulant money transaction for his benefit. and there are a few more indicators which made me believe GTL being a good company.
From the valuation perspective, the current transactions and expected valuation quoted in news article also kind of provide a good cushion for a retail investor and Banks have also converted their debt into equity at INR 10 per share (lenders are in great position when converting their debt into equity and if they are fine with INR 10, then I am good with INR6).

These are some of my thoughts.

Disclosure: Made a recent investment for tracking purpose. Watching the space and events before committing

Your market cap numbers are wrong - shares outstanding after conversion of FCCBs, merger with CNIL and Debt is over 1000 cr, giving it a market cap of over 6-7,000 crores. Yes, it trades at a discount to other towers based on trailing earnings, however it’s forward numbers are likely to be much lower due to Aircel’s bankruptcy. GTL and CNIL used to be Aircels captive towers, and thus will be highly impacted by the exit of RCOM and Aircel. Additionally, this loss of revenue will have a disproportionate impact on EBITDA due to the tenancy thing you already mentioned.

Hi, Sorry i was travelling for couple of days and could not answer your queries. i will revert back soon on your queries. regards,

Is this thread active?

Does anyone following this stock closely? Any update on the legal on going case in court?