Business Strategy
9. Mr. ShivaKumar Ganapati who joined Gokaldas in May 2017 is known as a turnaround strategist in Industry. He was mastermind in setting up of the GNFC chemical plant. Before joining he was the COO of IDEA. Mr. Ganapathi has been with the Aditya Birla Group for more than two and half decades.
Mr. Sathyamurthy is with the company since November 2015.

Mr. Shiva is working on controlling employee cost by
a. Centralizing each facility/unit, which was earlier decentralized brand-wise.
Illustration: Earlier they had dedicated facility for GAP and raw material procurement was exclusively done for GAP. Thus, economy of scale could not be enjoyed in case of multiple order and multiple vendor. Employees utilization would be at sub-optimal level in case of lack/non- continuous order flow from GAP.
b. Currently employees are not skilled and can only perform some part of garmenting. The company is planning to implement employees training program where each employee would be trained enough to do each part of garmenting. Eg. Currently employee stitching collar is not trained to do buttoning or bottom part, etc.

Industry size
28. The global apparel retail market is valued at $1300bn with China contributing ~$182bn and India contributing ~$65bn. China is de-growing by 5% and employee cost getting expensive augers well for Indian market. As far as low-cost producer countries are concern, Bangladesh and Vietnam are the direct competitor to Indian market. However, Bangladesh is only into garmenting and it has reached at saturation level. Vietnam is also at peak of its garmenting facility thus leave little headroom for the competitive edge it enjoys. 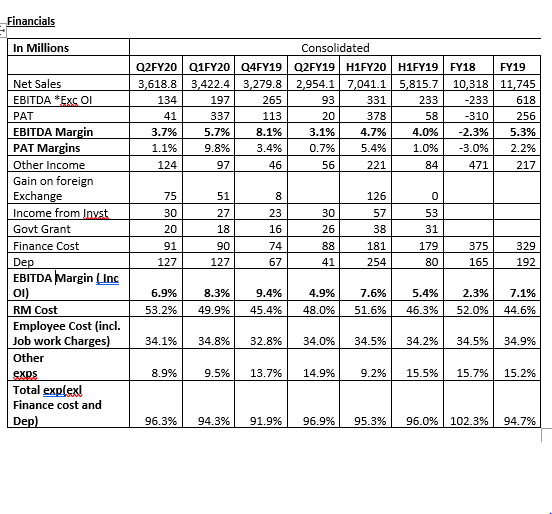 There is already one thread in Gokaldas exports which is inactive from May 2017. Why one more thread on that. can we not merge both?

Please move the content to the existing thread on Gokaldas.

GOKALDAS EXPORTS was a company acquired by Blackstone group from the erstwhile promoters at a price of around 270 a few years ago. Since then it has been in a strong downtrend. Currently at a price of around 70 it seems to provide a low risk high return opportunity. Comments put on charts depicting a cup and handle pattern and a rising channel shown. disc: trading position. [image]