Good results from globus. They have done pretty well on the bulk manufacturing part but UNIBEV is not performing that well.

Decent results posted by the company this quarter. Quite a significant jump in operating margins (due to lower raw material costs). The Unibev business also seems to be gaining traction. The management has been slowly building up the franchise across key territories. Bright future ahead. 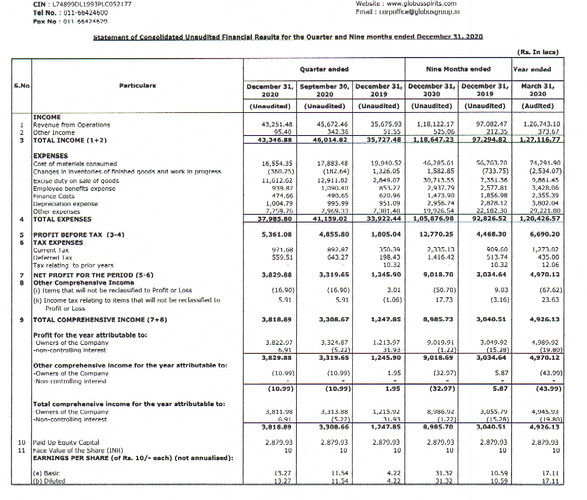 Is anyone tracking or studied it recently?
I have some queries about this. 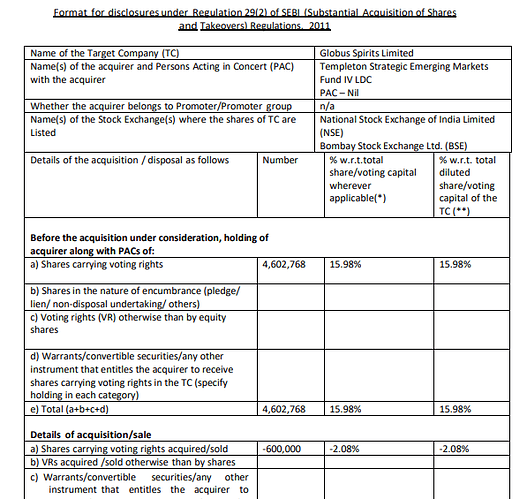 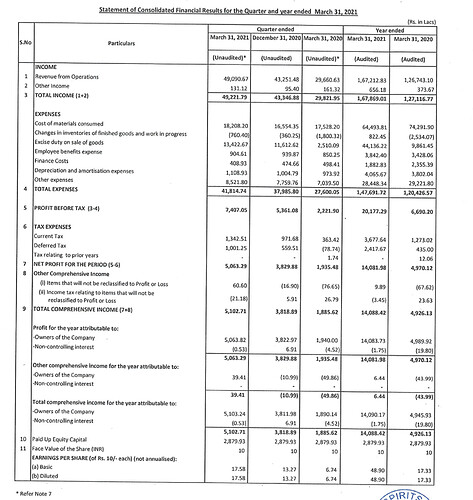 Capacity expansion from 140 KLPD to 280 KLPD. Capacity utilization at 100%. The company has halved its debt in the last 5 years. It’s a good story to watch out for. 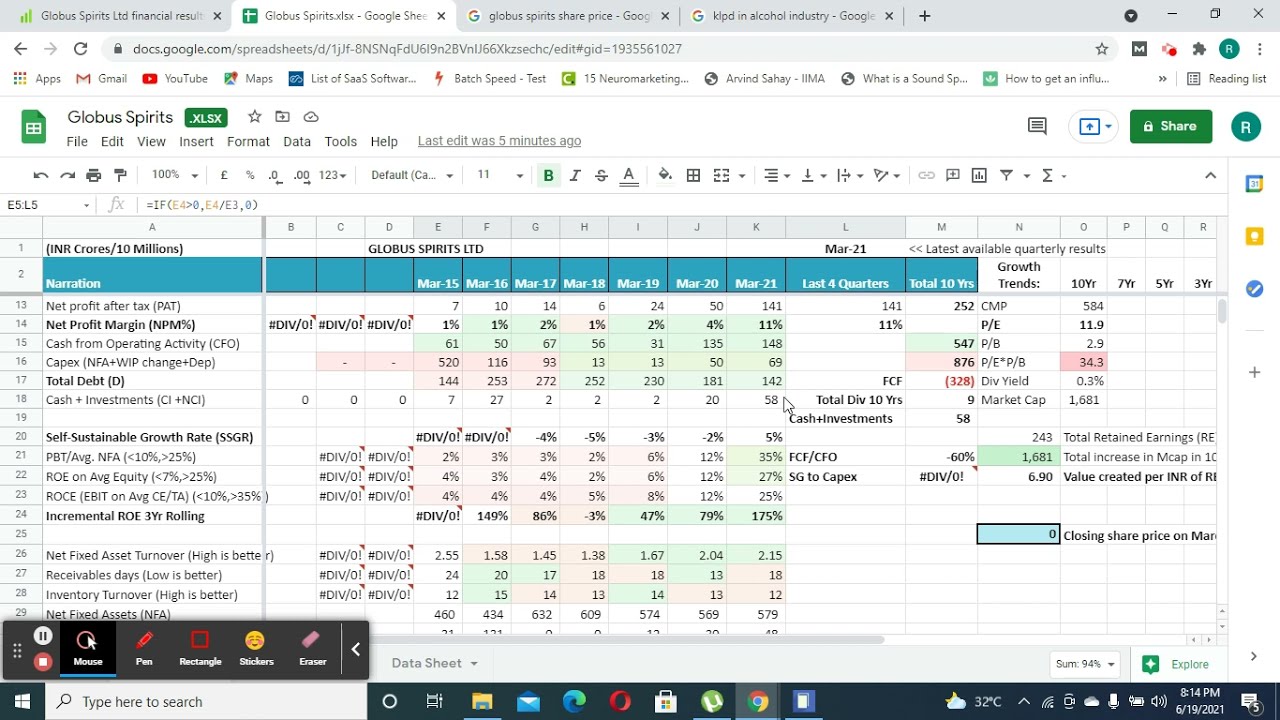 I guess the capacity numbers are different than the ones which you have mentioned. If I am not wrong in their investor call they mentioned that their existing capacities in the current year is around 500KLPD and additional 420KLPD will be coming in line in next 2 years. You may to double check. I might also be wrong. Thanks.

Has anyone done a deepdive into Globus fundamentals and future business prospects driven by grain ethanol push by government?

Will the co be able to sustain the high margins as ethanol has less margins vs liquor?

Though i haven’t covered fundamental part but for the sustainability of margins & future prospects, u might get some idea from this.

How Ethanol Policy changed the fortunes of GLOBUS SPIRITS❓ 👉So, Globus spirits is one of the largest grain based distillers in India. 👉They sell country liquor in the markets of Rajasthan ,Haryana,West Bengal and Delhi. Have 30% mkt share in Rajasthan in IMIL segment.
4 Likes
Vineetjain111 June 28, 2021, 2:09pm #31

In a nutshell, capacities will increase from 500 KLD to about 650 KLD this year (investments have already been made), and further expand to about 950 KLD by FY 23. Management says margins should be sustainable as the consumer business (high margin) has been growing well. Excess cpacities are fungible between Ethanol and ENA, so they should have enough sales avenues for their brands, other distilaries or ethanol for blending.

Even if Globus can do 18-20% margin (instead of 25% that they did in the last quarter), it looks like both top and bottom line are likely to grow at a CAGR of 25% over the next two years. Other large companies trade at 5-10x sales with worse margin and growth profiles, while Globus trades at less than 1.5x sales. So the re-rating may continue.

Disclusure: Bought worth 4% of PF as a trading bet till mid 2022 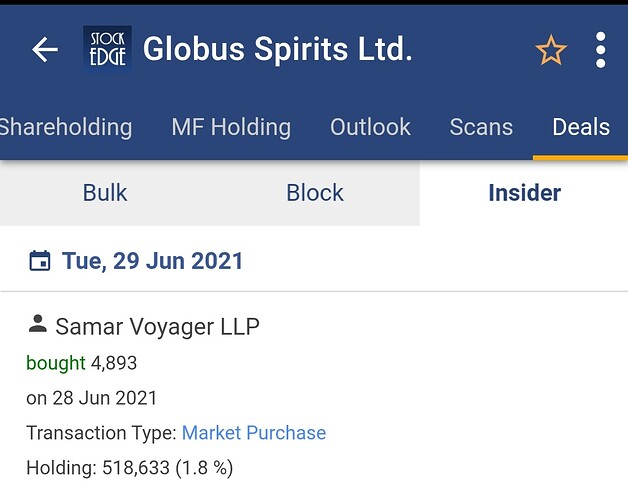 Unibev however continues to makes losses, 3.76 cr in the quarter as mentioned in the notes to standalone. The turnaround here will be most important to track and the major rerating trigger.

I have a question on the P&L if someone can help please - the standalone statement from FY 2021 shows an exceptional provision (expense) of 31.57 cr on account of losses in Unibev. But this amount is not mentioned in the consolidated statement. What this does is, the standalone profit for Q4 FY 21 is 22.5 cr, while the consolidated profit for Q4 FY 21 is 51cr. Is this an error, or some accounting practice that I am not aware of?

Anyone attended the con call ? Please do post the high lights

It’s the IMIL business of the company that interested me the most. The share of IMIL business/ consumer business has moved up from 35% from Q1 FY 21 to 42 % in Q1 FY22.

It has slightly decreased in comparison with Q4 21. But considering the second wave of covid it is okay.
Company did a sale of 3.38 mn cases in Q122 against 3.74 mn cases in Q421. Even with the reduced consumer sales company was able to improve OPM margins from 25 to 26%.
Company’s IMIL sales started improving in FY21. 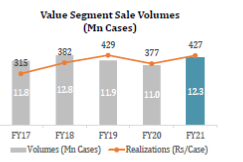 As far as Unibev business is considered, I think it will take another few years to turnaround. Company seems to be very confident about the business , has been very vocal about the hourglass kind of market. I have not considered this business in my investment idea at all. This is going to be a very tough market. Company has expertise in very few markets. Vijay Rekhi is not currently involved in active management of the subsidiary.

Moving to manufacturing / bulk segment. Company has the following lines of business

Capacity utilization stood at 98 % in Q122 against 99 % in Q4 21. Bulk alcohol sales stood at 29.9 mn L up 5 % QoQ.
The recent government’s guideline on ethanol blending is a major positive for the company. I expect this to provide a major downside support to the company.
Current ethanol prices.

Company uses broken rice as feedstock. As per company the bulk alcohol realizations were at 51.6 per litre in the current quarter( which I don’t expect to fall much due to the ethanol prices). Ethanol prices are revised every December.
Capex plans
Company is going very aggressive in increasing capacities, with plans laid for increasing capacities from 500 KLPD to 920-940 KLPD.
Company currently has a capacity of 500 KLPD. It recently did an expansion of 20 KLPD in Q4’21. The company is adding another 140 KLPD capacity in West Bengal, which will bring the WB capacity to 250 KLPD. The expanded capacity is expected to be online by Q3’22.( Revised by the company to September ’21 as per investor presentation Q122).As per the management majority of the project is already expensed. Company has started construction of another plant ( Capacity 140 KLPD) at Jharkand which is expected to start production by Q2 FY23. . They are planning a further expansion of 140 KLPD capacity at Bihar this year which is expected to start production in FY23.( As per investor presentation they are re-evaluating the location). Company has earlier applied for a license in Orissa too, however there were no plans to enter the state any soon. The capex in WB will significantly add to the revenue if they can maintain the current utilization levels. The capex at Jharkand may help in increasing consumer business as well. The company had sales of close to 2 mn cases of IMIL when liquor was banned in Bihar

Company’s franchisee bottling business may improve in the current quarter with easing of lockdown.

Byproducts
It is interesting to note that company has a share of 11% of revenue from byproducts. Majority of the revenues is from Animal Feed business. Shows efficiency of the manufacturing process. 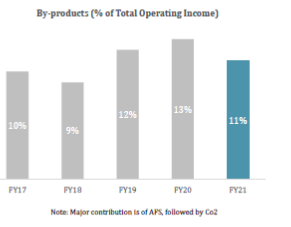 One of the major factors that severely affected the IMIL industry was the large share of illicit liquor that hit the market. Recently, many states has come up with stringent rules to curb the illicit liquor menace. Many states have started talking about increasing excise duty from Alcohol. Excerpts from Radico’s Q122 presentation. 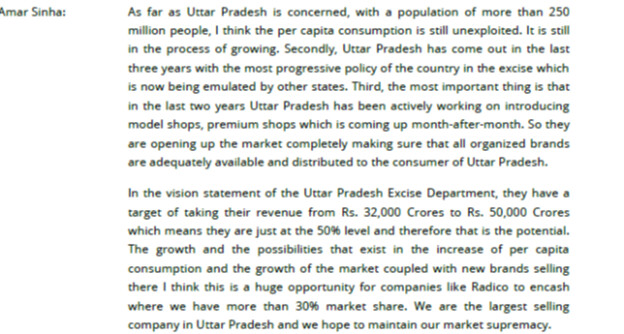 Globus has significant market share in Haryana. After years of stunted sales there was good growth in sales for IMIL in Haryana for the company in FY 21.

Inorder to achieve the targets for blending there is significant capacities required. So the ethanol policy provides a good downside cushion to ENA prices. 160 KLPD out of 500 KLPD capacity is already fungible. The new capacity coming up at WB will also be fungible. Most of the current as well as upcoming capacities will be in sugar surplus (also ethanol surplus) states like UP which will be an advantage for the company. Company has capacities mainly in Rajasthan, Haryana, WB and Bihar which are currently ethanol deficit with the new blending policy. (can have the advantage of freight costs while transporting). Also with the high crude prices, OMCs will also benefit from ethanol blending. The company has the advantage of using broken rice as the key raw material. ENA has an import duty of 150%, so there is no threat of foreign imports as well.

To conclude, the company clearly seems to benefit from higher margins from its consumer business. Government policies curbing illicit liquor will help the company in improving IMIL sales. Ethanol blending policy is providing a downside cushion to otherwise volatile ENA prices. There is also clear visibility in 140 KLPD capex addition by Sept’21 at WB which could lead to sizeable increase in revenue and EBITDA .

 IMIL sales has been banned in all South Indian states. So if any of the states where company is currently present decides so, it will be a serious setback.
 If the blending policy doesn’t take off well, ENA prices may be exposed to significant swings which may affect company’s revenue and EBITDA significantly as has in the past.
 Unibev has been incurring losses continuously. However, this may prove to be a useful asset 3 or 4 years down the line

Discl: Invested from lower levels and biased. Have covered only very few aspects of the company. Many of the contents are taken from AR and Investor presentation, so pls do your due diligence.

Thanks for sharing the annual report.

One question, Samar Voyager LLP finds mention as a top 10 shareholder.
Kunal Agarwal is a director at Samar. (~1.3% stake)

I am presuming he is the same Kunal Agarwal who is a director at Globus. (no shares against his name in AR though) Increased prices of beverages and wider acceptability of alcohol drinks in social circles have driven investor sentiment in the stock of the company, which posted strong results.