Over the years company has built reputation for timely delivery which is one of the most critical risk in new home construction.

Based on the updates provided and financials reported, it appears that company is delivering project on time and also able to launch new projects. Company website also provides construction updates and even a price list.

A PE firm Xander Group founded By Siddharth Yog invested in Eldeco City project. This is one of the biggest projects by EHIL. EHIL held 33% state in the project. In FY2016, Eldeco brought back remaining 67% stake in the project and now Eldeco city is wholly owned subsidiary of the company.

Company has projects in multiple format including low rise, high-rise, commercial etc. going forward, company aims to focus on large scale integrated townships in outskirts of city to provide mid-cost housing at better standards.This will also enable company to gain some advantages over smaller players who may not be able to fund large townships. 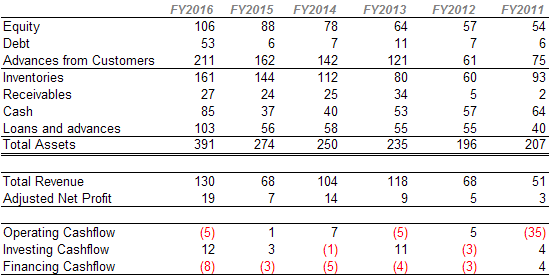 Company revenues and profits are lumpy which is common in RE firms as it depends on construction activity in a year. Company has managed to remain debt free and has funded its assets mainly from internal accrual and advances from customers. the fact that customers are making advance payments is sufficient evidence of reputation of the group in delivering on time as promised. company is even earning good interest income on these advances. Such advances has helped the company avoid borrowing money to build a land bank and get into a debt trap.
Rs 53 Cr debt in FY16 is already paid back as per the latest balance sheet from Sept 2016.

Since most real estate companies have a huge amount of inventory, an analysis of inventory is necessary.

companies land bank is increasing especially in recent years. Unsold inventory is very low. This is also evidant from the fact that customers are paying advances to book the inventory. Project in progress is also not a very high number compared to overall size of the balance sheet indicating that company is not starting too many projects at the same time which is usually how a homebuilder gets into cashflow issue.

In annual report for year 2010-11, it is mentioned that land acquisition (300 acres) process is almost accomplished for Sultanpur Road project.

Next year, in annual report for 2012-13, it is mentioned that land acquisition is under process for Sultanpur road, a township of 300 acres.

Again the following year annual report for 2013-14, it is mentioned that land acquisition is under process for Sultanpur Road project a township of 200 acres.

This project on Sultanpur Road is not mentioned in subsequent annual reports. Need to check what happened to this land purchase.

A quick comparison of small and large peers

Most of the peers maintain a huge inventory mainly because offtake in last few years has been subdued. This inventory is funded more by debt than advances from customers. Only Poddar which focus on affordable housing is debt free. Kolte Patil has managed to generate some advances from customers and Godrej Properties has good advances. However, this number is still low as compared to size of balance sheet. 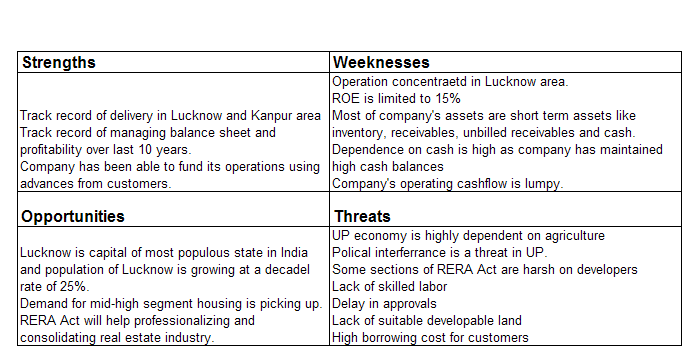 I value homebuilders based on their book value as most of their assets are short term assets. Eldeco is trading at Price to Book value of 1 as of April 5 2017. since this is debt free company and potentially has some undervalued asset (like land and projects in progress) there is a possibility of re-rating. Other companies are trading at 1.5 to 3 times book even though they have huge debt and large unsold inventory that may have to marked down. Lucknow is capital of most populous state in India so growth opportunities are present for the next several years. Company is now large enough to execute large integrated township projects which should meet untapped demand.

Good post Yogesh. I also have been tracking EHIL for sometime now and following are some points from my end - 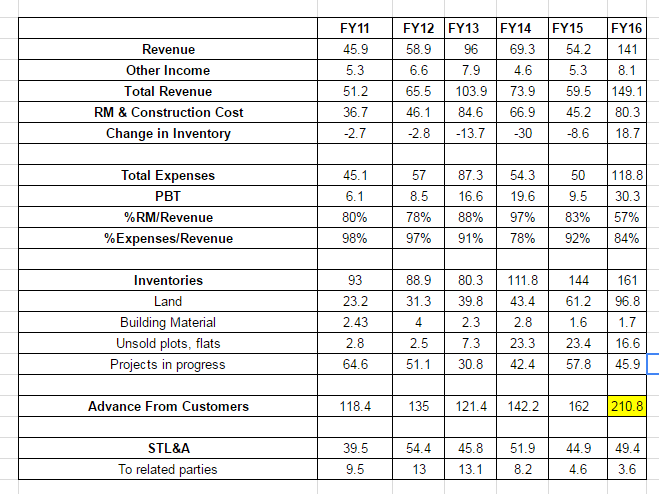 The revenue growth in last year might be because of acquisition of 67% stake in Eldeco City. Need to figure out how much juice is left in Eldeco city project.

I have talked to two different friends in Lucknow and both of them said that Eldeco’s reputation is very very good in Lucknow.
They thought that prices have shot quite a lot in Lucknow and unless there is correction, property market activity might remain subdued. (e.g. they bought villa at 30L in 2009, now the price is 1.3Cr. he works in BHEL and with his salary he can never afford that villa). So selling price units of Eldeco projects also remain critical IMHO. I have checked two of their projects - Eldeco City and Eldeco City Breeze. The average unit prices are 40L and 32L respectively.

In AR FY16, company mentioned that they see challenges for next two years due to softening of the market in Lucknow. In my experience, when company sees challenges, they are overoptimistic. So this might very well get stretched to 3-4-5 years.

Regarding valuation, I feel two metrics shall be used - Book Value and DCF of all visible profit. I am planning to sit this weekend and figure out all visible potential revenue and net profit and try to discount it backward to today.

These are quick notes, will add more later.

Disc - No investments yet

thanks for your views and feedback on reputation. This is one of the key asset of a homebuilder. Since they are using the same brand name for all their projects means that care about their reputation.

You are right that acquisition of remaining 67% stake in Eldeco City boosted the revenue and profits as beginning FY16 this is now consolidated with the parent. This has also resulted in higher reported profit for FY 16 and hence the stock price may have moved up in sync. They also started reporting consolidated results since Q12016. I am sure the deal was done in such a way that neither the buyer nor the seller got a raw deal.

I am looking at this company more as a long term medium growth story where company rides on urbanization wave, rise in affordability driven by cheap financing, integrated township model driving pent-up demand and good execution including corporate governance.

I am still unclear about the parallel business EIPL which appears to be much bigger than EHIL. Although operating area of two companies do not overlap, it is possible that lucrative projects may be booked under EIPL entity. that’t the biggest risk.

I am tracking this stock since rs. 246, as I remember porinju has recommended this stock in past, but an big fund or hni would resist to invest in this counter due to low equity an free float.

Thanks for starting the thread @Yogesh_s . Well covered . This stock came in my filtered ones (some 4-5 out of 200+ real estate companies screenes 6 months back) but I gave it a pass (went with ashiayana housing ) though was impressed by financial mgmt being such a low market cap company in a sector full of financial juggling. Few questions I have
1.what is revenue recognition method ? Project completion based or delivery based .In case 1st then any evidences if accounting is not very aggressive
2.Usually , the less leveraged real estate players with relatively sound financoals either do not get into land purchase on balance sheet side n treat it as expense item or they r intelligent enough not to buy land at peak of real estate cycles .Any idea how has been eldeco in this regard - which were years when they ended up purchasing land (I think they treat land as asset)
3.any credit rating of project spvs available
Few inputs from my side
1.there is a site called Indiarealestateforum ,handy sometimes to track builders n projects
2.I tried to valuate some of companies on project pipeline plus growth basis but they had land as expense items.may be that can be tweaked to create one more valuation model apart from the two you are using to get a comparative sense of valuation
Thanks a lot for the work

@suru27, Can you elaborate more on point 2, asset vs expense ?

@csteja there are companies in real estate who treat land as an asset and put them in balance sheet ,usually , they r more leveraged n one who purchased land in peak of real estate bull market pay the price (like our Ankara purchased Hyderabad land at 407 cr in 2007 n sold at 460 correct in 2017) to reduce leverage. Then there are companies who treat land as an expense item and treat them on p&l side.usually, they are companies who r relatively less leveraged n work on jv models . 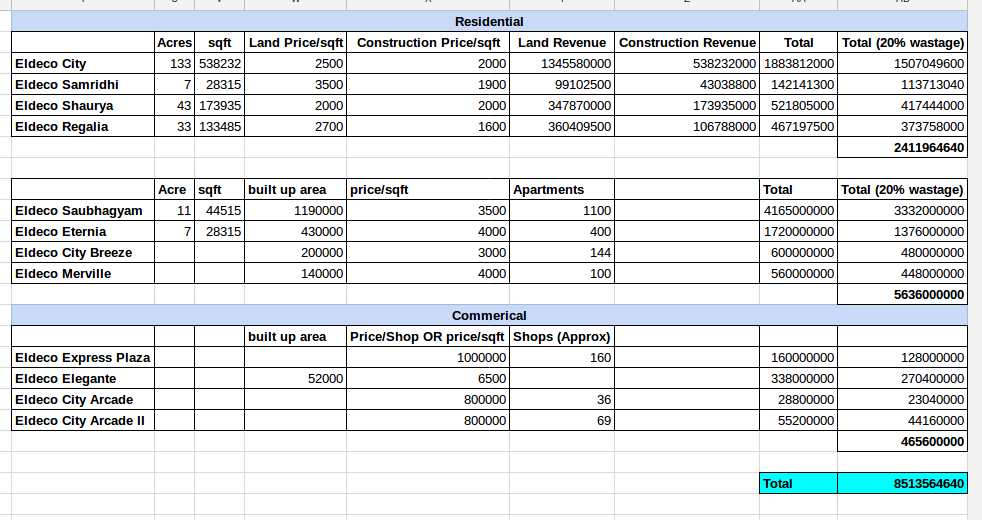 Need to learn DCF and figure out OPM/NPM to make sense of above data. Also need to work on figure out - how much of revenue from above is already booked and how much is left to be booked. I’ll try to do it this week.

Disc - Quite a few assumptions have gone in getting above data. I reserve the right to be wrong. No investments yet.

As per the House Price Index data released by RBI, Lucknow real estate market has outperformed All India index over last 6.5 years (since RBI is collecting the data). Kanpur market has under performed. 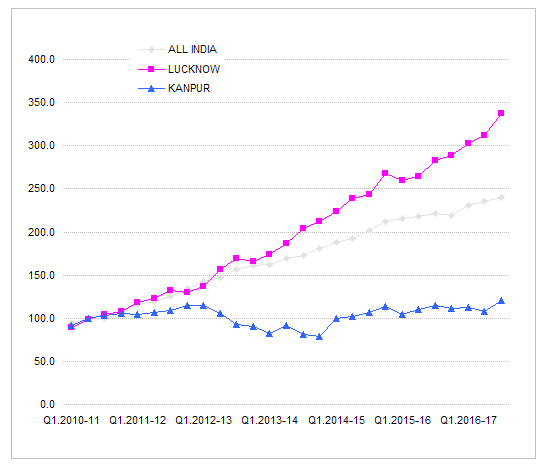 I also calculated trend growth rate over the same period for various cities covered by RBI.

Anyone with knowledge of Lucknow real estate market, please confirm if RBI data is close to your observation.

Some notes -
Typically developers buy land (down payment on land) and construction cost is financed by advances from the the end users. In most of the cases, developers had borrowed money from the banks for construction in the hope of future end user buyers. In Noida, developers had even less skin in the game. Developer just paid for 10% of the land and rest was financed by Noida authority.
Look for developers with no debt, good cash on balance sheet and decent land bank. (more skin in the game for developer)

As banks stopped lending, a lot of non banking capital got into the balance sheets of the developers. This capital comes at a very high cost (20%+ IRR) and that itself makes the business unsustainable. The developer’s business becomes moneylender’s business.
If some leveraged developer can find cheaper source of funds, those can be stock opportunities for decent gains.

Except for Noida and Gurugram, there is home sales happening in other cities. These two cities have structural problem which has no solution yet. Bangalore developers learned from slowdowns of 2000 and 2004 and have been somewhat cautious in launching new projects.

Markets have corrected from 2012, developers need to wake up and smell the coffee. (take haircut, reduce prices)
Important to look at selling prices of developer in the city in which he is selling. Value for money developers will do better.

RERA will curtail future launches and might result in decrease in supply.

You should check prof bakshi blog on ashiana housing valuation

@Yogesh_s I see reports of india rating and crisis suspending rating coverage of eldeco in last 1 year due to lack of cooperation . Aware of this ??

Though Q1 results were not encouraging, Eldeco stock has risen sharply in last 10 days from 800 levels to 1200+. Guardian Advisors from New Delhi has been regularly buying from open market for their clients as per disclosure, they now own 13%+ of equity. As Eldeco has tiny equity of < 2 Cr, focused buying is making the stock jump. Post demonetisation, this stock has come a long way from Jan 2017 price of ~ Rs. 400.

Requesting feedback from experts having good current knowledge of UP (Lucknow in particular) real estate market and Eldeco’s presence.

who r guardian advisors? any idea

Outcome of the Board Meeting held on 27th October, 2017