DHFL Management is trying hard and not shying away atleast like IL&S, PC Jewellers.

The way financials are behaving past few weeks is eerily reminiscent of what happened circa mid july-august 2013 . The primary factors spooking the markets are somewhat similar to what happened during that period :

Rapidly depreciating rupee.
Murmurs surrounding fiscal deficit.
Strong likelihood of Interest rate hikes by RBI
Here’s the performance of some of the major financials during that period.

so I think Market over reacted this time and this too shall pass . Buying quality financials would now should serve well in the future.
Note: copied above table from other board

Thanks for the knowledge all of you share on here

While the repayment does come across as a positive, it looks like the DHFL management is working hard to prove they are clean. This ‘focus’ on assuaging the concerns wrt the stock isn’t a good feeling. Just my opinion.

Discl: Am invested from a lower base. Have added in this meltdown, but starting to get uncomfortable by the number of concalls and recent heightened activity of the management. Forgive me if i come across as a novice, this is my first bear cycle

Dhfl has stopped funding and so has India bulls . This is from a friend who is a branch manager in lic housing. Can someone else verify the same. My friend said they have stopped payments as small as 15 lakhs. Should be temporary

DHFL is into affordable housing loans and so its maximum ticket size is only Rs.15L.

That is a huge claim to make, that these companies have stopped lending, and even if temporary is a huge red flag Even PSBs have not ‘stopped’ lending. To what extent can a branch manager talk about the rest of his employer, let alone a rival?

This is what I heard from a friend. I am not trying to spread any rumours , that’s why asked if anyone else could verify about the same. He works as a branch manager for a hfc and cause of his position and field is aware about daily happenings of the industry.
Regards
Divyansh

I think there are 2 issues,

Firstly people are worried about liquidity.
DHFL has short term debts that are maturing for repayment within the next 6mths to 1yr. Investors are worried where they will get the finance to pay for these as all the debt is lend in turn by them to property holders. And even if they can raise money to pay the short term debts, they will have to borrow at the current market rate whereas mortgages were given at the older rates.
Ofc they can increase mortgage rates but this brings us to the second issue

Higher mortgage rates might not be affordable to all borrowers in which case npa ratio will increase.
The house prices I believe have not changed over the last few years so if they seize the assets, no one is sure if they can recover the debts and fast enough to satisfy the short term bond holders.
We dont know what their stress test is or what their lending criteria is. I mean when they lend, do they ensure there is enough salary buffer so if rates increases, the borrower can still afford to pay

If there were a bank, RBI acts as a lender of last resort. So companies like Gruh and HDFC wont have that much of an issue as they have support of a bank that will lend to them and the bank can then borrow from RBI atleast in theory besides they dont have a problem of mismatch between short term current assets and current liabilities.

If you were an NRI residing in say USA and you had 100k dollars to invest. USA offered you 5% and India offered you 5%. You would prefer USA because that country has demonstrated stability over a longer period of time, no demonetisation history, etc. Even if you were not an NRI and had no barriers to where you could invest, you’d still prefer USA. That’s why countries like Greece, Cyprus had to offer higher interest rates.

Now mf operate under similar conditions. Given same rate they would lend to a stronger company unless DHFL were to increase interest rates. If DHLF had access to only higher interest rates and were to in turn increase the interest rates on their mortgages which is a commodity that would make them noncompetitive.

You shouldnt look at just one metric

Its very easy to generate a high return on equity

That’s what 8k miles have been doing

I think we’re generally in agreement about the attractiveness about the current risk/reward situation, but I don’t agree with some of your extrapolations.

Has anything changed after the first conference call? I believe management said that they have access to Rs.20,000Cr worth of liquidity, which was enough for the rest of FY2019.

Higher mortgage rates might not be affordable to all borrowers in which case npa ratio will increase.

This applies to the entire Indian financial industry. There is no reason to believe that the interest coverage of low income borrowers is less than that of higher income borrowers. Both types of borrowers will try to max out their repayment capacity. (I could be wrong, but this would be 30-50% of their salary.)

This really depends on which housing marking within India we are talking about, but if I recall correctly cheaper housing (<50L) has been doing much better than more expensive. Either way, assuming that a wave of defaults is forthcoming and that borrowers will be under water is very extreme and unlikely. This presumes some kind of economy wide financial crisis.

You’re telling me that the bank promoters of these companies will provide money NOT at an arm’s length? Banks cannot freely borrow from the RBI. They need to provide Gsec collateral and pay interest. All of this interferes with the bank’s own operations and liquidity/treasury management. In the event of a ‘bail-out’ situation, I doubt HDFC Bank alone will be expected to come to their rescue.

This applies to the entire Indian financial industry. There is no reason to believe that the interest coverage of low income borrowers is less than that of higher income borrowers. Both types of borrowers will try to max out their repayment capacity. (I could be wrong, but this would be 30-50% of their salary.)

I dont know why you feel the need to quote each paragraph. If you would write a letter you wouldnt do it, will you. besides I am perfectly capable to read my post again to see where your line of thought in response to it is coming from
If we keep on quoting and requoting, in the end no one will follow other than the 2 people who are writing
Anyway as you touched many topics, I’d like to just reply to one above and have intentionally quoted it, my preference being usually not to.
Re: the above topic is this not the reason why all finance companies are being punished ?
Agree that DHFL lead the downfall but almost every finance company has taken a beating

Re; HDFC bank can inject funds into Gruh. It will be at arms length. They will have to pay interest rate. The question is not that. It was “if they have access to funds”

Yes, that’s true. Confirmed it with a friend at DHFL. However, he says it is only a cautionary measure. No default so far. However, they are seeing a heightened FD withdrawal.

They are paying out to the FD holders and no irregularity reported so far.

My view is, right now investors will forgive low growth or no growth. They will not forgive liability default. So even if I slow down my new loans sanctions for some time to preserve on cash, that is ok. I know liquidity is tightening, perceptions issues, few may lend, more may redeem. If we don’t grow that’s okay. Let’s preserve cash for liability payment. Let’s pay on time.That is what I would have done.

Not sure if below situation is true or is a rumour.

Now four things matter to me for next few weeks.

1 Any kind of liability default

Thank you for sharing.

As per news, they redeemed some percentage of debentures prematurely. This seems to be a well calculated move.

Also stopping loans to preserve cash? I would do the same. Growth at the expense of liquidity tightening is not good.

Let’s hope that this is just a phase and DHFL will recover lost ground rapidly.

Disc: invested and might add more based on risk to reward analysis which is positive as of now.

I agree with Basant comments where he mentioned new and small players will not survive in HFC sector and only Established players will survive once this storm is over. DHFL is a 40 yrs old company and will surive this time as well. I agree that there had been some corporate governance issues in the past which is still haunting them and thats one of the reason, it got butchered brutally apart from DSP selling bonds . Ajay Piramal mentioned that MF’s and Bank’s have started lending back to NBFC’s which should ease some liquidity issues.

Such instruments carry lowest credit risk, as per the definition by Crisil.

But BasantJi also mentioned that stocks that have fallen 50 odd percent might be due to some reasons which market will get to know later on.
I know that’s in speculative zone and can be debated endlessly.
Still trying to figure out if there is anything that’s not known to majority.???

Disc…Holding 10% at CMP and clueless …the fall has shaken up confidence but unable to find any legitimate fundamental reason for such fall.

Agree, but if you look at the history of DHFL, its a beta stock. It will correct more than other stocks , IBHF also corrected 40-45% from Top, so something wrong in IBHF too?. I was skeptical like you earlier when it fell 60% but no bad news came out in last 4 days now. I am confident, it may not break its previous high soon, but will recover for sure. Having said that i can be wrong as well as no one can predict correctly.

I am keen to see what RJ does? 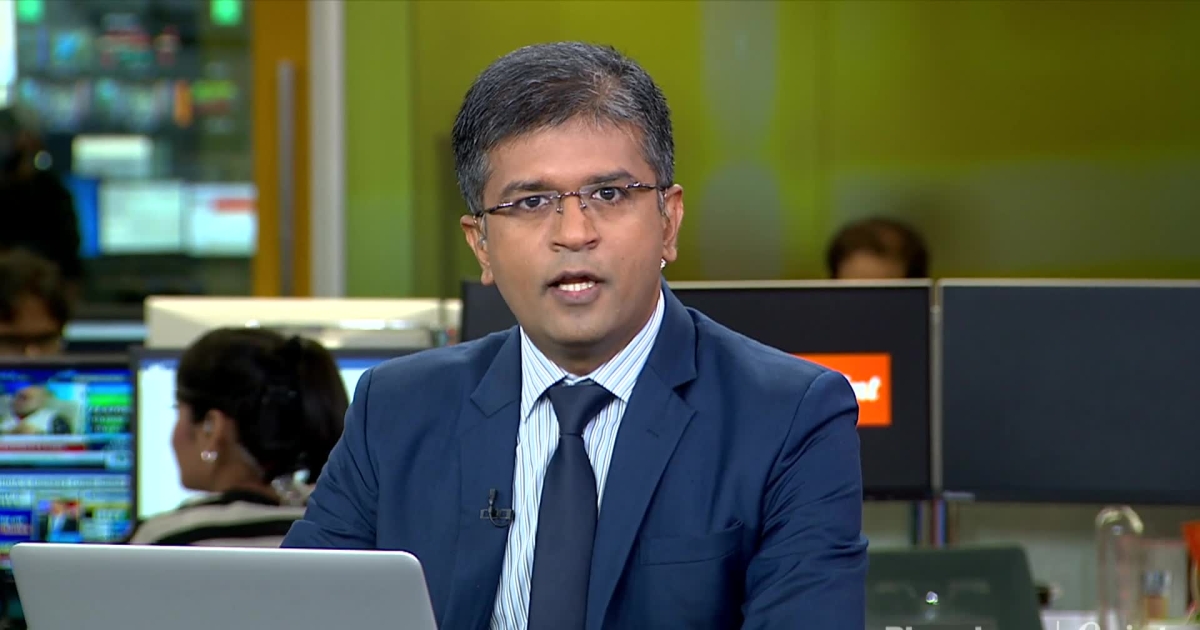 IIFL On The Liquidity Situation & Its Impact On NBFCs

Follow the latest in business and stock markets on BloombergQuint. Our digital streaming service includes comprehensive live programming on a daily basis, from global and domestic markets, coverage to views from the most influential newsmakers in...