Hi,
Since I was not able to find any good growth stories at decent valuations, I was thinking if there are other strategies to look at. One theme that I read a lot about was Companies paying down their debt. When I analysed it I found some of the prominent investors make lot of investments on this theme. So I tried to screen these stocks for further study.

I get about 28 stocks to read about. Some of the stocks may actually be growth stocks. Prominent investors may have invested in them for Growth reasons than debt pay down. I have not used any growth parameters in the screener.
I have not looked at the liquidity and promoter holding. But since 28 is decent number, we can eliminate some of them by looking at moneycontrol for volumes.

One key observation is many of them seem to be paper companies. Looks like they are suddenly able to pay down debt due to some favourable tailwinds?

I request people to share their valuable commentsDebtPaydown.xls (20 KB)

Debt pay down has been an interesting theme and the market is usually slow to recognize such companies. Companies that provide important services to the sector but the nature of the sector is such that taking debt becomes inevitable and is part and parcel of doing business are all nice investment candidates. Adding to the financial leverage if there is low capacity utilization which is low because of tepid demand can be a good kicker once demand comes back. One such sector is offshore drilling which has been in the doldrums because of low oil prices and over supply of rigs. Offshore drilling contractors have to take on debt to buy jackups and floaters to service oil companies. Average production cost for a barrel of oil is about 40 $ and recently we have seen oil sustaining above that level leading to an increase in drilling activities which were earlier muted. Globally , there is a race for drilling as many oil wells as possible. In countries like Brazil, the government has recently given massive tax subsidies to foreign oil companies for oil exploration. Trump also signed an executive order expanding offshore activities soon after he assumed office. India has also seen record drilling happen with ONGC drilling the highest number in its history.

Aban offshore is an interesting candidate in this regard. It’s indias largest drilling contractor with a fleet size of 18 rigs. It’s capacity utilization is about 50% and its paying down its substantial debt load. Given the steep downcycle it has remained ebitda positive and also is generating reasonable cash flows. Some listed seismic study companies in India have also shown a sharp uptick in orders from oil companies and are venturing into offshore studies indicating demand coming back.

The risks are very high debt, defaults in payments, possibility of it going bellyup remains, commodity type business with short contracts and of course the oversupply in the oil rig market.

Attached is the Ensco presentation ( one of the top drillers globally ) which gives a good overview of the going ons in the industry. In this presentation on page 17 - Aban ( Company 1 ) is mentioned as one of the companies with most new contracts awarded YTD 2017 along with Maersk Drilling. 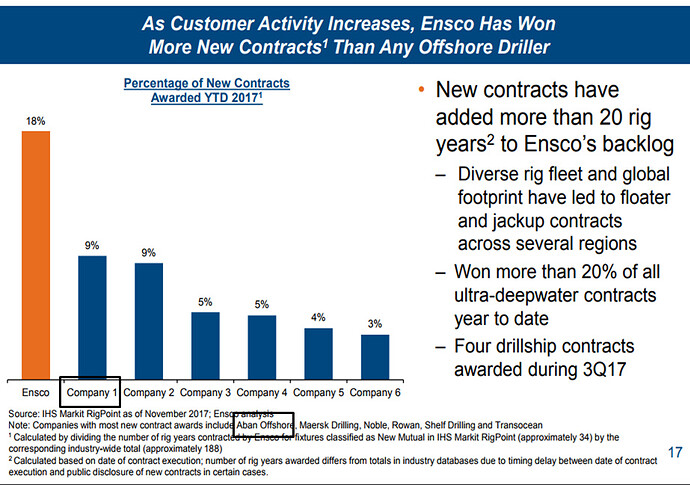 Disc - invested and views may be biased.

What about Gujarat Themis biosyn? Seems a turnaround company. Anyone in forum know about this company?
Found this analysis, though old one, ( courtesy aceinvestertrader) but story seems plausible.

Background: The Bulk Drugs is a huge industry within the Pharma Sector and as the complete sector is in strong growth momentum (and is expected to continue for a long time to come), it’s given oppo…

Please include Morepen Labs in this list too. As company has repaid 95% of its debt and has been reporting profitable QoQ performance.

Dear @bheeshma sir,
I have 3 questions related to Aban Offshore,

All data taken from @screener.in

Q/s no 1 has a probabilistic answer. The expectation is that its operating conditions will improve in the wake of the increase in oil prices and and a general increase on oil & exploration activities. Even in these challenging conditions it generated an operating cash flow of 1800 cr, so cash flows are expected to be higher than recent levels which will surely be used to pare debt going forward.

The IndAS rules require to reclassify preference share capital into borrowings - hence there is a reduction in share capital. The equity share capital remains more or less at the same levels.

The company is physically not paying tax - however it has tax liabilities and while i am not an accounting expert the adoption of IndAS has created the need to recognize them. Page no 103 in the AR has an explanation.

hello @bheeshma sir thanks for the reply

some of you guys have been suggesting to include some companies. I didnt manually select any of them. It was the output from screener, that I have posted here. The reason some of the companies like Gujarat themis, Morepen didn’t feature could be, as per the data that screener had, though they were repaying debt, they may not be earning enough ROIC or the other income may have been more than the filter criteria set. The criteria like other income being small portion of operating profit etc were added to eliminate all those companies which are repaying without proper operations. Also while having a rough estimate of how a company will pay down debt is important, it is also important that speculation should not take over. That is the reason for so many stringent criteria used in filtering.

Aban offshore is an interesting candidate in this regard. It’s indias largest drilling contractor with a fleet size of 18 rigs. It’s capacity utilization is about 50% and its paying down its substantial debt load. Given the steep downcycle it has remained ebitda positive and also is generating reasonable cash flows. Some listed seismic study companies in India have also shown a sharp uptick in orders from oil companies and are venturing into offshore studies indicating demand coming back.