The Indian Specialty Chemical Industry has the potential to quadruple in size from US$ 20 billion to US$ 80 billion over the decade.

Among Specialty Chemicals, the focus of the company has expanded to performance products that are used in larger volumes in the Oil Field and Construction Chemical Sectors, to maintain the integrity of its pipe lines.

The company has a 50:50 JV with global leader Nalco Champions, whose operations are taking off and sales and PAT have grown smartly in FY14.

Its expansion has been delayed due to clearances but it has not hampered production; it has now embarked on debottlenecking.

It is available at cheap valuation considering itâs robust and growing earnings, the cash / current investments on books, inflow from sale of stake in Inogent Labs in July 2014 (Rs.8.97cr) and value of shares held in Clariant Chem on its books.

Slowdown in industry Dai-Ichi is catering to and Competition, domestic/overseas

At the current market price (of Rs 100), the company is trading at 7.2x its FY14 Adjusted EPS of Rs 13.9 per share.With very good debt equity ratio, conservative management (Mainly Parsi with someindependentdirectors are associated with Godrej Group and Tata AMC). Thegrowth of JV would also be key trigger to the growth in the company which otherwise shown lackluster RONW ratio of around 5-8%.

Views from other members are invited.

Disclosure: I am holding shares in the company.

Holding of the shares OK ? How many shares? And when you can buy it? How to select the shares to buy?

The annual report days there’s some labor dispute going in and the case is pending in the Supreme Court. Any insights?

The Company itself has got huge working Capital requirement and a negative Cash Flow for this year. Looking solely to Cash and Cash equivalent will not help since both Debtors and Inventories seems to pile up.

Inventories have remain at same level though but there has been an increase in Debtors though by around 40-50% range which signals lower collection and the Company may have to go for additional debts.

The Company has also sold of its Investment perhaps to match its working capital requirement and that has given an uplift to its EPS too.

As rightly pointed out by Shan, the labour dispute is with respect to a wage agreement with workers which expired in 2008 and may entail future liability with the company for which I believe the company must have adequately billed provisions.

This is a classic asset play. Have no interest myself but for those keen they should look at the annual report on the company website. You will notice a tidy Rs 1.4 crore in annual rental income (note 22) against land holdings of some Rs 6.8 crore on the books (note 11). That’s a v high rental yield that’s just not possible in India. The rental yields are rarely more than 3-4% where this company operates. So the value of the land, not the one carried on the books, is probably around 25-33x this annual rental income or Rs 35-46 crore …thereabouts. That’s on top of the cash and other investments noted above at Rs 41 crore. One could say the company is essentially trading below a slightly liberal definition of “cash”. Once you adjust the return ratios for these, they would look much better. And not to be ignored that they use a top quality auditor Deloitte despite their small size.

The question with such asset plays is really - if/when these valuable assets will be monetized and how much will flow through to shareholders as dividends or buybacks.

@Narendran: Can you please elaborate further on your question, Particularly last two one. The disclosure is given so that other members can independently evaluate the idea since my view may be biased due to my investment irrespective of price of purchase and number of shares I hold.

@Shan: Thanks for bringing out this point. I do not have any information about same. However, as the note suggest, the dispute has started from November 2008 and despite the issue, the company continue to operate at Pune plant for last four years which increase in turnover. Having said that, your concern is still valid and I have no further information about same.

@Rohit: During FY14 Cashflow, Page 32 of annual report, the company has positive operating cash flow of Rs 1.62 Cr which does not include asset sale cashflow. while Debtor have increased by Rs 5 Crore on incremetal sale of 26 Crores, which is 68 Days (Receivable/Daily Net sales) increased marginally from 66 Days in FY13 and remain in range of 54 to 68 days in last five years. Please also note that despite increase in the sales, there is no increase in debt with constant increase in Cash balance/investment. So, I do not see major issue on this point personally. However, thanks for your efforts to bring this point to discussion.

@RJain: Thanks for highlighting this point which was missed by HDFC Sec/as well as my analysis. On Money control board, there are some discussion about land value but I did not have any clue of some and I appreciate that we need more clarity on this point as well.

Thanks everybody for valuable inputs and look forward to get more view on same with advise from Senior members.

I continue to holds my shares.

The owner of this co is a a Parsi lady who inherited it from her father and have scaled it up nicely over last few decade.

She is a Rotarian of repute and into social work and philanthropic activities.

So from promoter POV its a big comforting factor. Company should be carefully evaluated in view of production of specialty chemicals shifting to India from China and other tailwinds.

Very good results by Dai Ichi Karkaria supported by Champion Dai-Ichi (JV with Nelco Champion, US Based company with Bill Gates as investor in group).
The growth from Champion Dai Ichi sales YOY is more than 100%, with PAT growth of 175%. We need to wait for annual report to get more understanding and sustainability of the margin in future.

I have done some research on the company and few observations are followings:

It is engaged in the manufacturing of specialty chemicals. It has JV with CTI Chemicals Asia Pacific Pte. Ltd (also known as Nalco Champion), which is a part of Ecolab, US based listed company with Bill Gates as the largest shareholder (~10.7% holding) of the company.

Dai Ichi posted excellent numbers for the FY15, due to stellar performance of its JV company NALCO Champion, sales doubled and profit tripled YoY. Consolidated EPS for the company stood at ~31 Rs in FY15. Its debt free company with 20%+ROE.

Reputation of the promoter is good in the market and it has eminent members on its board.

It is holding liquid and valuable assets on its book. Market value of the investments is around 58cr. It has has a commercial office in Mumbai, which is yielding annual rent of 1.4 cr. So assuming 4% cap rate, its value should be around 35 cr. Further, it also has a land bank of 15 acre in khasarwadi, which is a prime location in pune and many builders are coming up with residential projects at khasarwadi.

Going forward, prospects for the core business looks good due to increasing demand of specialty chemicals and strong growth of Nalco Champion. As per various articles, Ecolab (parent company of Dai Ichi JV) has seen re-rating and trading at premium valuation (~25x) post the acquisition of Nalco Champion as it is expected to have robust growth for the next 5 years.

Current market cap of the company is around 180 cr. Its investments are worth more than 100 cr and core business has ~13 cr profit (total profit of 23 cr) in FY15.

Views from other members are welcome.

Note: I am holding shares of the company (5% of my portfolio)

Good to get another VP interested in Dai Ichi. Do you have any view of Dahej Plan? the company faced environment approval issue on Dahej as per HDFC Security report in past.

As per 2014 annual report, they have ~6 cr as capital work in progress which i believe is for Dahej Plant. They have also mentioned that approval has been delayed due to policy paralysis in FY14. New government has provided environment clearance for many projects in last one year so need to check the same for Dai-Ichi.

I will try to get information about Dahej plant from the management. Also share your views on the company to understand things better.

I believe that performance of its JV would drive profitability going forward. Dahej approval would also be positive for the company and stock looks cheap at current levels.

@ravijain88 jain Just started looking at this and while going through the annual report I notice that the company does emphasize its focus on oil field chemicals and the oil sector in general. Its growth over the previous fy was in large part due to demand in this sector.

Would the current state of slowing oil demand and falling prices have an impact on them - as it is a sizable chunk of their revenue? I have read recently that a lot of oil producers are looking to squeeze input costs in an effort to retain margins…Additionally oil field construction/ pipeline investments appear to be slowing - another segment they have been positive about.

The JV has been growing at 100% per year for last couple of years and revenue in FY15 was approx. 160 cr. Dai-ichi owns 50% and recognized 80 cr based on proportionate accounting. So JV revenues are now 80/180. Also, the JV margins seem to be close to 17-18% which are double that of parent. It also appears from the FY14 report that 25% of JV COGS can be accounted for by sakes from Dai-ichi to JV. Therefore a call on the growth of the JV is increasingly critical. If the JV does indeed grow at a healthy 30% (IF) and the parent business recovers with economy (historical cagr of 15%) then consolidated numbers may have a decent runway for some time.
Disc: invested.

Akshay…Nalco Champion has a robust business model and its services are very critical for the oil companies as a result which cost cutting measures should not affect the Nalco Champion business. This is also evident from the 2014 results of the company and commentary by Ecolab’s CEO Douglas Baker, Jr.

Further, oil prices are stabilizing at the level of $60+ which is a comfortable zone for the oil companies.

Thanks Ravi…
Dug a little deeper into the criticality of Nalco’s product for the oil industry. They cater to both upstream and downstream businesses.

However, that being said oil is also a raw material component for a lot of their products and cheaper oil will lead to margin expansion.

With the oil industry contributing upwards of 30% of revenue, in the short term one could potentially see reduced growth of top line, albeit with margin expansion. Of course any recovery in oil (as the past few days suggest) will fuel growth further.

Extract from Latest Economist Article
In all, IHS reckons that 80% of the new capacity this year will be profitable with WTI at $50­
$69 a barrel. As its price has edged above $60 in recent days, some shale companies have
begun to talk about increasing output again. The size of the “fracklog”, the pipeline of readyto­roll
projects awaiting better prices, is contested. But the principle is clear: American shale
firms have become the new “swing producer” of the global oil market. 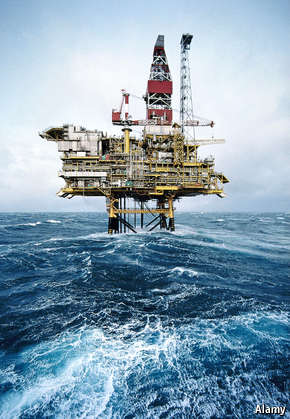 The question I have with regards to the JV is “what is the level of sales at which it would stabilize to a trend growth rate of say 15%-20%”? Clearly, if one looks at the growth pattern over the last year and the years before that, the JV is in scale-up mode that is less correlated with industry growth and more with market share gains in the relevant markets where it had a negligible presence. So despite a possible impact on overall industry volumes could this still display growth of say 30% for some time before the growth curve plateaus out to 15%?