is the CFO looking to exit?

Good set of results from the company, they have maintained 60 cr.+ quarterly revenue runrate and are confident of growing topline by 20%+ in FY22. After that, they are aspiring for 15-20% revenue growth. Here are my notes from the concall. 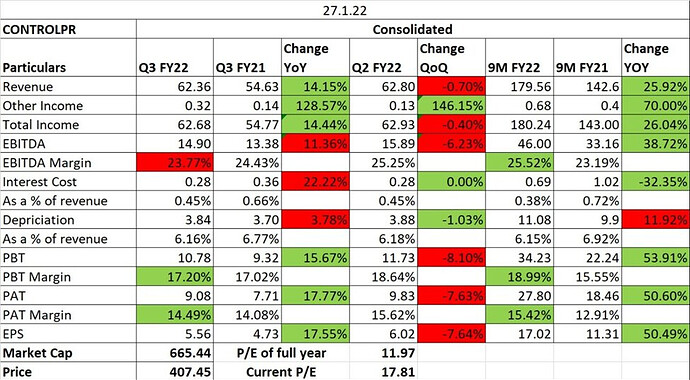 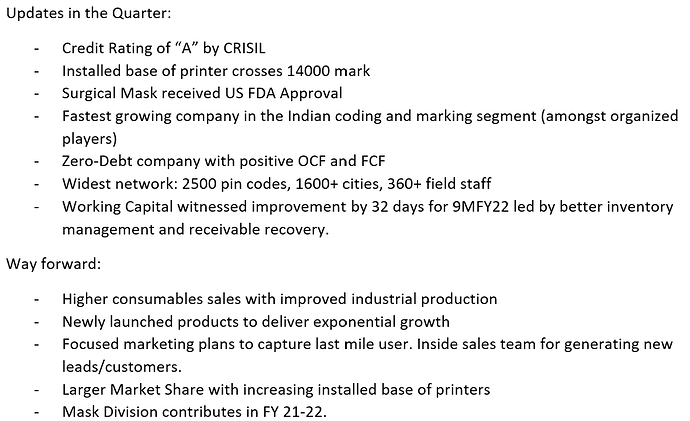 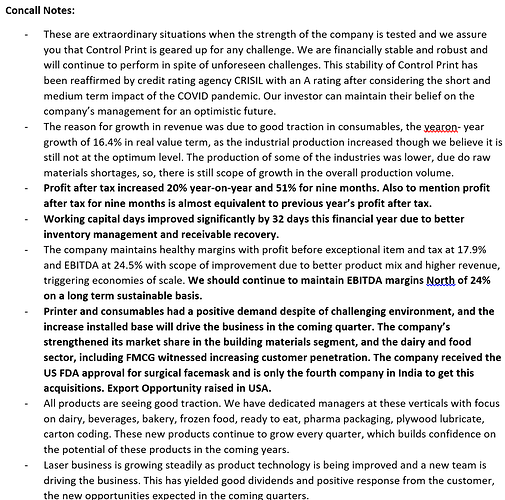 Have they set up a facility to manufacture masks?

And even if they didn’t, why are they putting in capital and resources into an unrelated commoditised business whose time is over?

While the other stuff sounds okay, such capital allocation decisions would only distract management from the core business where the need to beat strong, well-funded competitors.

Yes the capacity was already setup to manufacture masks at very minimal investment. In the beginning this was done as a CSR activity, however now they are doing 2-2.5 cr. monthly sales (meaning 25-30 cr. annual nos.). On a 230-240 cr. base, this is already quite significant. However, I will not hold my breath for growth from mask division, its directly a function of covid waves.

About capital allocation, management has been very quite prudent with capex returning a large part of free cash back to shareholders (~50% payout).

About mask being a commoditised business, I am not very sure. They are only the fourth Indian company to get FDA permission to sell masks in US. For context, we have 100+ Indian pharma companies selling drugs, I don’t know which one is more of a commodity.

Pharma products can be both commoditised or niche, not sure about the point of your argument. Some pharma companies have great ROIC while others struggle to even meet the cost of capital.

Masks are pretty much commoditised, with no niche really possible in most cases. Not much point in looking at only Indian suppliers since Chinese dominate.

Also, not sure why you’re looking at just revenues, when ultimately return on capital employed and growth matter.

Growth without value accretion to shareholders is worse than no growth, because management spends time and resources on a low potential business.

Like I said, I like the core business and the many seems capable, but this decision seems hasty. I have a feeling that the mask business won’t even be mentioned by next year.

Another good set of results from the company, quarterly sales has grown past 70 cr. and company has made inroads into competitor accounts in pharma division. My notes from concall are below.

The approximate cost of acquisition is Rs12.20 crore.

New to the company. Just wanted to know on how do you all feel the longevity of the business in terms of growth. And is the management walking the talk? coz I saw they mentioned to achieve 400cr of revenues but they did ~250-300 I guess…

(I might be completely wrong as well. just want to see other perspective.)

New to the company. Just wanted to know on how do you all feel the longevity of the business in terms of growth. And is the management walking the talk? coz I saw they mentioned to achieve 400cr of revenues but they did ~250-300 I guess…

Its a very sticky business with limited profit pool (therefore limited competition), and is a very good proxy to industrial growth. The delta in terms of growth in this sector is low as most printing is because of regulatory requirements and each competitor is quite good. This means that once a factory installs a printer on a production line, it will not change the supplier unless something goes very wrong. So, gaining competitor accounts is not easy and you need to have newer lines to penetrate into the customer.

About guidance, management didn’t guide 400 cr. in FY22 but by FY25. Growth wise, they have executed very well gaining accounts in newer sectors where they were not present before. Also, they are doing these small acquisitions (like Innovative Codes last year, Markprint recently) to increase potential market size. Additionally, company is investing in software vertical as they want to be a complete service provider (e.g. in pharma division, they have come up with QR code that tracks production batches which is implemently directly by Control Print instead of the pharma company). So, I feel management is trying very hard to unlock new growth avenues.

If you have any specific question, please feel free to ask. Hope this helps

Good set of results with 20%+ sales growth and higher EBITDA margins due to higher consumable sales. My notes from concall is below. 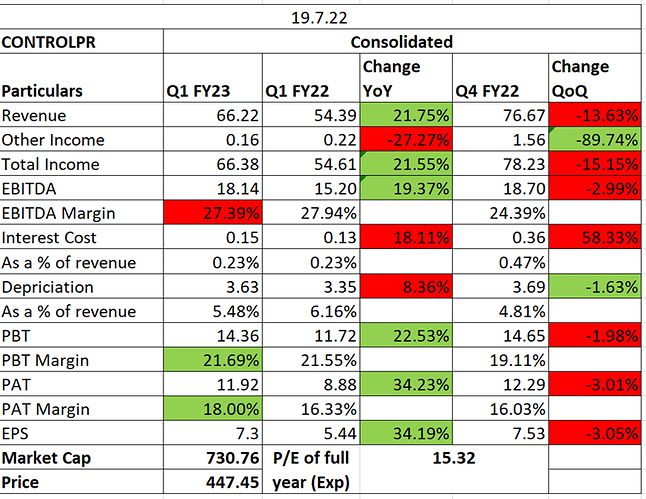 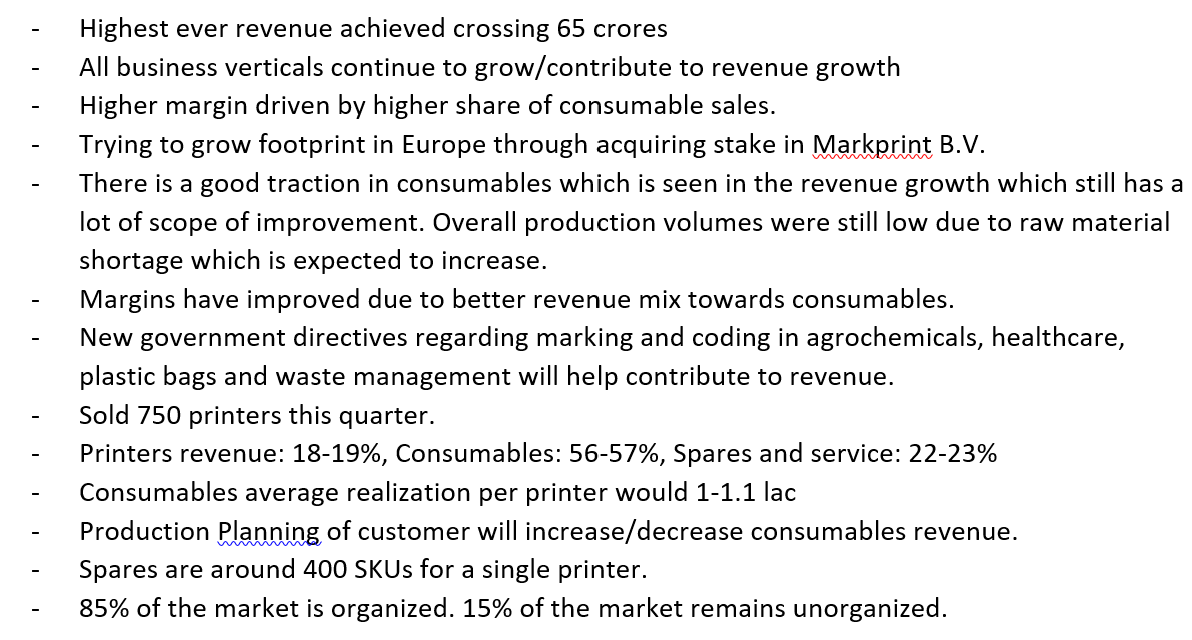 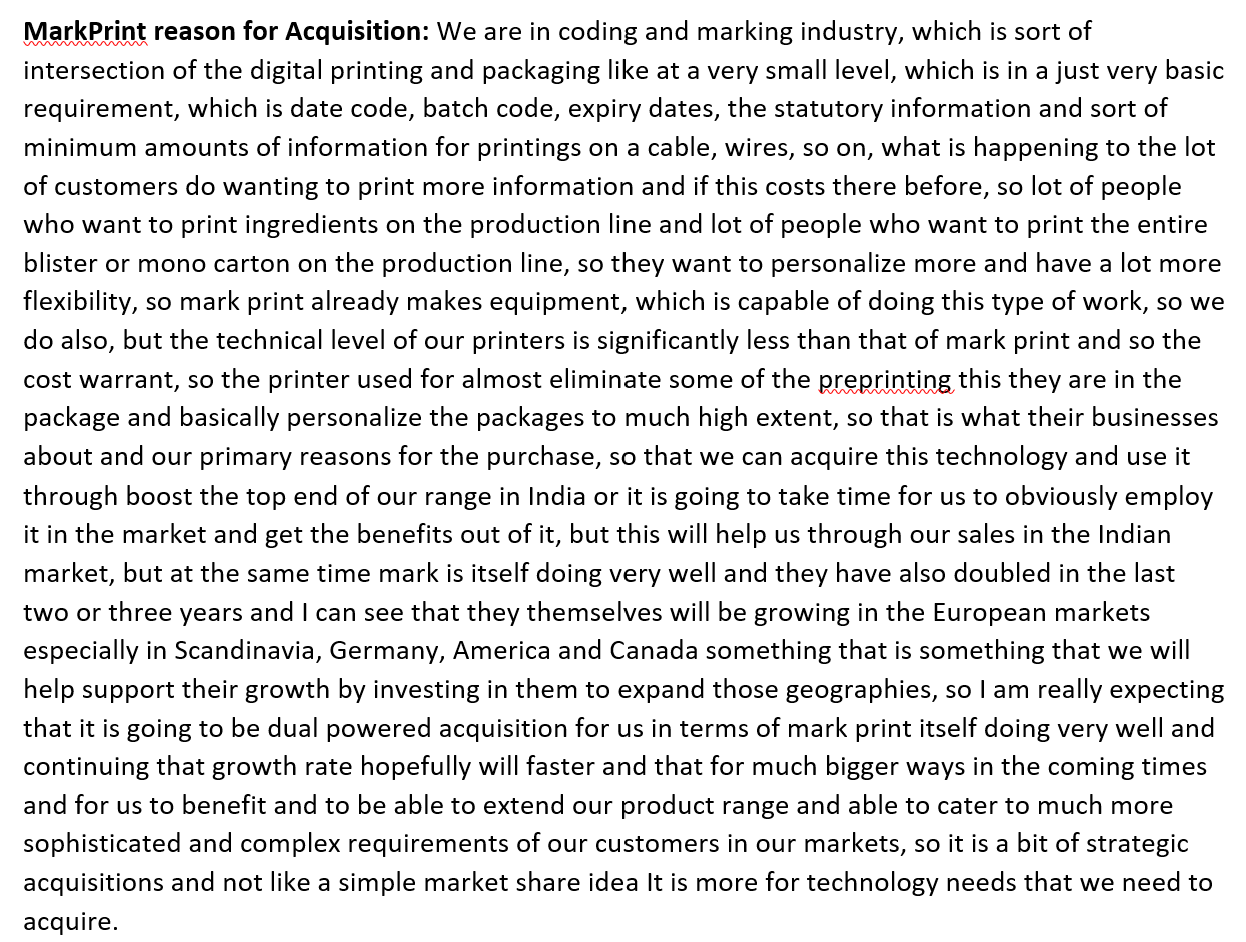 I had published a short post on this company on BLOG covering background, revenues, margins, capital needs, valuation, etc.
Since a lot of these points are already covered in this thread, I am sharing the valuation section, capital allocation issues and my personal thoughts sections of the above post here in the hope that it useful to members. In case it isn’t, feel free to report the same and get it deleted

With these optimistic assumptions, the DCF yields a value of 455/share which is very close to the CMP (around 430). What this means is that we will earn a CAGR virtually equal to the discount rate of 13%. Now, you will note that this result is with fairly positive assumptions built-in

Lets assume that you do not believe in DCFs and consider them BS. From a multiple perspective, as per screener, the market is giving them a PE of 16 (TTM basis) as of now, which is around its average of 15. It would be fair to say that the market has already considered some growth prospects in this company. Now by FY25, if we expect sales to become Rs 400 crores and EBIT margins to be 20% with a tax rate of 18% (MAT rate applied due to hilly region benefit) we get Rs 65 crores of Profits in March-2025.

Now what multiple to apply for March-2025? If we take a multiple of 15 and divide by the share count we get a result of Rs 602/share i.e. a good CAGR of around 14.5%. However, we expecting things to be perfect. We expect that the company will deliver the promised growth & margins and are also expecting that the market will continue to give a multiple of 15. Do some sensitivity analysis on growth, margins and multiples and check whether if it fits your margin of safety & return expectations. If it does then you can invest at this price too

Some IMPORTANT things to be aware prior to investing in this company:

All said and done the above shows the attitude of the promoter to invest company’s funds in different ventures. While the company has paid dividends, it is not to extent of the FCF generated by the company. However this attitude appears to be changing for the better. In the Conf Call 26.10.22, the company said:
“The board has decided that INR 50 crores is what we’ll keep as cash on books, including whatever investments, cash,bank balance, whatever form of liquid investment,how you’re going to term it, and we have our limits for any acquisition or other opportunities that come…….”
“And whatever more than INR50 crores the board has said that we will largely return back to the shareholder”

If you want to believe in what the management was stated, you can addback 50 crores to the assets. Consequently the Fixed Asset Turnover of the company will reduce and you can project the fixed assets requirements accordingly.

I could have ignored most of the negative factors IF the stock price was lower. However, at the current price (around Rs 430/share), its a little difficult for me to ignore them as it cuts MY margin of safety. I believe that when a company does not share the proceeds with shareholders or is not a good capital allocator, our returns are more dependent on the moods of Mr. Market and/or the company meeting or exceeding the growth expectations especially since the margin of safety is not sufficient. Moreover, no investment can be seen in isolation and one must see what returns/risks their alternate investment options offer. Hence I have chosen to pass this one (for now).

On the other hand, lets not forget that the company is showing great sale of printers, has shown good growth in consumables, is showing better margins, is doing the right kind of acquisitions and has made a cap of Rs 50 crores on investments/cash. It could also enjoy a tailwind of higher industrial growth which leads to higher industrial output which in turn leads of higher sale of consumables. Thus, there are quite decent chances that not only the company achieves its revenue target of Rs 400 crores on standalone basis by FY25 but also exceed it. There is also a possibility that the Chandivali land gets sold/developed & gives good profits and/or that is YOUR margin of safety. Maybe the new acquisition done by the company does very well. Maybe Mr. Market continues to give the current multiple & more to the company even in the future. Maybe your margin of safety and return expectations defer from mine.

I have also been overly conservative in such situations in the past and thus it could be that even for this situation my conservatism is (unconsciously) showing up again. Obviously, my views are (and should be!) subject to change based on new data and stock price.

Another very good set of nos, with 25% sales growth and 48% EPS growth. Concall notes below

Hi @harsh.beria93 I am new to this company. I have question.

If the total industry size is 1200cr for organised players and there are four players. For the sake of simplicity let’s divide the market size evenly between the four players each one will have a market of 400cr.

That’s a very small market size IMHO and company will find it very very difficult to grow in future at present TTM sales growth of 22%.

What’s your take on expected future revenue growth of company?

Thank you for your time in advance.

Coding and marking is a niche industry and Control Print has a strong positioning within it. Management has mentioned that the industry grows at 1.5x GDP growth. I have collected market sizes over years from different reports.

Growth comes around 6-8% from FY16-22. However, I dont think this is correct as Control Print has grown sales at 11% over this period, despite maintaining similar market share. Please look at market share numbers for Control Print over years.

FMCG companies like HUL and Nestle have grown their sales at 7-8% over this period (FY16-22). The basic logic behind higher growth in marking and coding industry is that there are more things printed on packaging products over time and that should mean that ink sales growth should be higher than FMCG sales growth. We also see this in Control Print’s growth, where they have grown at 11-12% vs FMCG cos growing at 7-8%. It also kinds of add up with management’s claim of 1.5x GDP growth.

Since FY18, installed printer base has more than doubled with sharp growth happening in FY21-23 period. This was because Control Print launched TIJ/TTO printers which are used in the packaging industry, where Control Print had lesser presence. Management has also been mentioning that they are not only winning new business, but also winning competitor’s accounts. Also, they have become much more aggressive in pursuing growth opportunities (launch of lower priced printers for economy segment through ICIPL, going into software solutions for pharma industry through track & trace technology, more export focus, Markprint acquistion, JV with V-shapes SRL, etc.). All this suggests to me that management has become more growth hungry. The good thing with this business is its asset light nature meaning a large part of profitability comes as dividends. Recent spurt in growth is an extra bonus.