Career Point
Aims to recover the enrollment in FY’14

The mgmt said it will see improvement in Q3 and Q4 compared to H1 FY14. However, it will not be able to recover the enrolment and revenue loss of H1 FY14.

The company’s margin suffered due to fall in top-line in tutorial business.

Employee cost up because of addition of one resident campus in Kota and rise in salary of faculty members.

The company has rolled out the launch of CP STAR (Scholarship Test for Admissions and Reward) for the next academic session and achieved a phenomenal response from the students.

The company has launched tutorial test for GATE with focus on 4 engineering branchs.

In the education business, the company has enrolled more than 1800 students in various 3 to 4 years program.

The launch of two new schools at Kota and Jodhpur in Rajasthan with 200+ enrollments each in the first academic session has created a benchmark in their respective regions.

The company has around Rs 51 crore of net cash and cash equivalent.

The mgmt said that for next year it expects improvement in tutorial business with improving economy, student adjusting to new exam system and residential system started by the company.

There will be no significant capex for tutorial business. In formal education business, capex for next 1.5 years is Rs 20 crore for its university. It will be funded through internal accrual.

Formal education will contribute around 20% of top-line for this year.

For FY15, the mgmt expects 25% top-line growth in tutorial business and 30% growth in formal education business.

As per the management, for the next academic year, the enrollments have already started and they are up by around 50% YoY.

As on Dec’13, the company has total of about 13 company owned centers, 13 franchises, 2 CP live centers and more than 60 test series centers. Company has added 3 new franchises namely in Ahmedabad, Akola and Bareli during Q3 FY’14.

With enrollments coming back for tutorial business and returns started to emerge from the investments made in formal education business, management expects better earnings and margins going forward.

The formal education is a high entry barrier business and initial investment is high. The company has done its investment phase and now the growth phase will begin. Company will leverage upon its assets to increase the overall ROC.

There will see no significant capex for tutorial business. In formal education business, capex for next 1.5 years is Rs 20 crore for its university. It will be funded through internal accrual.

For FY15, the mgmt expects 25% top-line growth in tutorial business and 30% growth in formal education business.

For the nine months ended Dec’14, no of enrollments stood at 22108, up by 16% YoY. The company already made up with the lost enrollments that it had to suffer last year. The company has sufficient capacity to make sure the enrollment reaches to around 30000 with same capacity. So lot of operating leverage benefits will arise from here on.

Further, this year there were more enrollments in Class 11 and hence the pace for next achedemic session enrollment is already visible.Unlike in past years where enrollment used to be focused and dominated more only on engineering side, the enrollments now are more or less even out in between Pre engineering, Pre medical and Pre foundation exams.

Enrollment in branch and company own centers have shown decent growth, while there was a decline in growth in franchisee enrollments. Company had shut down 2 of its franchisees. Going forward, the focus will be more on company owned centers.

On CP gurukul residential coaching and campus business, full capacity has been reached in 2 years time with total enrollments of around 1320 with tutorials and schools both. Higher growth was seen in students enrolling for both schools and tutorials leading to higher realization per student.

Company has some land parcel with book value of about Rs 44 crore, which it plans to sell in next couple of years. It has market value of more than Rs 125 crore.Capex requirement in formal education will be around Rs 5-10 crore in next year.Company is a net debt free company at consolidated level.

Going forward, the focus will remain on margins from almost all the segments. On sales side, management expects sales to grow around 25-30% going forward.

what do you think of the valuation? It trades at 300 crs. for negligible profits (roughly 7 odd crs. in F15?). What do you think is the medium term cash flows which would make it either attractive or perhaps not so attractive?

Also, ICICI and Reliance AMCs have been selling down their ownership. I would view that as a negative. On the flip side, I have sometimes found institutional selling to be a contrarian buying signal. Depends upon how tired the institutions are.

In summary, what are your key buying arguments for Career Point?

I would add my worries for the stock.

Why do this company need to venture into NBFC which is essentially a low RoCE business. This way it will take additional burden of receivables of few yrs’ tenure. I fear it might be going Jain irrigation way when the stock was punished heavily for venturing into NBFC space. They should have exited cash guzzling real estate stuck in schools biz as well. It seems recent run up is due to quality investors (Ajay Relan, Sandeep Sabharwal … ) jumping.

It would continue to show stellar growth due to the size of opportunity but quality of business has gone down by one notch.

what do you think of the valuation? It trades at 300 crs. for negligible profits (roughly 7 odd crs. in F15?). What do you think is the medium term cash flows which would make it either attractive or perhaps not so attractive?

Also, ICICI and Reliance AMCs have been selling down their ownership. I would view that as a negative. On the flip side, I have sometimes found institutional selling to be a contrarian buying signal. Depends upon how tired the institutions are.

In summary, what are your key buying arguments for Career Point?

Actually I am not so negative on NBFC front. Some of these NBFCs are quite profitable. A major cost for NBFC is client acquisition, which is zero in case of captive NBFC. Later on, it can be spun off at a multiple of book. But that assumes they will make a success of NBFC. It has a clear negative that initial equity would have to be provided by CP, burdening their balance sheet.

Management have declared their intention to sell and lease back the school land. Though I am underwhelmed by the loss on their first sale transaction. Hopefully they will make profits on the remaining sale and lease back transactions. While margins would decline (due to lease rentals), the capital efficiency would rise. Theoretically, some of that released capital can be used to fund the NBFC.

All in all, education businesses are high margin, and enjoy high valuations. I dont know whether the current valuation leaves enough on the table for new investors.

The sharp decline in business is well documented. It was due to changes in format of IIT entrance exams where emphasis is being given on +2 marks as well. They seem to have recovered but competition has also grown in the meantime. I would say that education is high margin business for sure but not necessarily high RoCE business. Look what happened to Tree house and others. They keep diluting equity to maintain growth. I would love CP to remain a vocational and coaching entity rather than running schools where scalability is low.

Hi Anil, I had merely gave the highlights of concall, so if any one tracks the co , it might helps them.I am not holding any shares , nor i am tracking this company.Hope this clarifies the matter.

Disc: Was Invested, but sold off in market correction due to low conviction and pf consolidation.

On track in turning around and becoming an asset light model company.

Disc: Invested and may be biased. 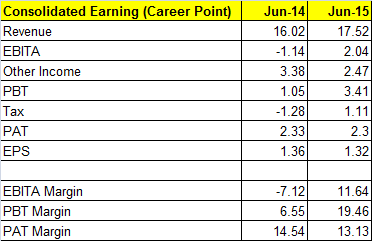 Even if you take Profit for operations before other income, interest and exceptional items of Rs. 2.04 cr., you missed adding depreciation of Rs. 1.32 cr. to it. EBITDA from this method is 3.36cr implying EBITDA margin of 19%

Thanks @invpriyaa for sharing the correct version. Sorry my bad. Was using EBIT instead of EBITA for margin calculation.

There is an investor presentation shared which is having all the related details - http://corporates.bseindia.com/xml-data/corpfiling/AttachLive/F947EBCE_0A27_40F4_B066_CFAA73EDDEE8_120107.pdf

Just listening to June con call. Mr. Maheshwri says most states have got rid of PETs and gone in JEE route. Looks like its a permanent move, looks a bit worrying

More gurukul campuses were planned during the quarter with regulatory approvals obtained for Mohali. Company aggressively is building capabilities and scale for the integrated residential coaches.

The company is using online media very aggressively and has built a B2B digital library for schools. It was able to sell first of its license to one of the school as well. Steady board.com website was launched and mobile apps have reached to more than 2500 active users.

The company also launched Global kids in preschool segment with 2 franchisees already confirmed and have started the schooling.

Going forward, the management expects the margins to improve as further operating leverage kicks in. Margins in next couple of years can reach to around 35% from currently around 25-27%.

Management continues to remain optimistic on Enrollment growth and aims to reach the peak level of enrollments of around 30000 achieved in the past, in the next 2 years of time frame.

No significant capex in FY’16, Rs 5.5 crore capex for up keeping and construction activities of which around Rs 5 crore already spent in first 9 months ended Dec’15.

Kota centre alone is expected to grow around 10-13% on YoY basis as compared to around 5-7% growth expected generally for the coaching centers.

The company has already signed MOU with Central government and Rajasthan government on skill development programs. Already 1500 students have enrolled and it’s a 3 months program wherein the company gets around Rs 10000 average fees from government. Margins hover around 30% in this segment.

The EO item of Rs 0.87 crore for the Dec’15 quarter, represents some book loss on asset sale transaction.

The company has cash and equivalent of Rs 65 crore. A total borrowing stood at Rs 44 crore and an equal amount is lying in the liquid investments.

The company will sell the land, whose book value is around Rs 44 crore, as and when appropriate value is received.