We all heard about Uber, Netflix and Oyo Rooms. These names were not there a decade ago but now we use the services offered by them on daily basis and they are disrupting the traditional businesses.

But how these startups were able to gain the market share rapidly, how they changed the perception of a person who is consuming the service. They thought in a different way to look at the problem and provided a solution to that problem. O resolve the problems they formulated a business model in such a way that it provides a scalable approach which can allow them to grow in exponential way. Lets take the example of Uber first.

Prior to Uber a commuter within a city was having only option of taxis but they were adamant and charging heftily. Commuters were frustrated but they did not have any option. With the launch of the commuters got a new cheaper option and also the taxi drivers were able to earn handsome income. Uber just provided the platform to the commuters to avail the services and Service providers (taxi drivers) to provide the service. This Business model allowed it to scale by adding more users and Service Providers in a city or opening its service in new cities. Here the Business Process/Model was a key differentiator.

In case of Netflix they changed the way we consume the content. Prior to Netflix only option available to viewers was using Cable TV and Youtube as a modern video sharing app. But Netflix provided a Business Model which allows it to grow using monthly subscription with Unlimited videos for the viewers which changed the entire game.

In case of Oyo Rooms which is providing its customers to book hotels in cheaper way providing Win-Win situation to guests and hotels. Here the hotels are able to provide unconsumed inventory and users are able to book the cheaper hotel rooms. Again this Business Process/Model allows Oyo Rooms to scale to new cities and add more and more users.

Here we discussed about the startups in digital world which changed the way we consume one or other service by creating Business Process/Model which can grow in sustainable way. We can say that this Business Process/Model provided them some kind of Moat to them. They were competing with traditional businesses which were not able to provide a cheaper or better way to the consumers who shifted to using them on regular basis and even after other companies replicated the same model they were able to sustain as the market size was really big and which is growing day by day.

One may say these were startups and they were able to form a Business Process/Model as they were starting a new Business, but this can be applicable to not only startups but regular companies as well. Businesses few times face headwinds or go through rough patch and the leadership team search/experiment for new ways to generate revenue streams. These experiments sometimes give an edge to Businesses to succeed. I am thinking about the same in last few days and come across some of the companies, which are listed and the above model can be applied to them. Please note that this is not a validation of idea. I am still searching for the validation of this idea and would like to know the thoughts of fellow investors so that I can refine my approach. Here I have taken two examples and still working on some companies if they can fit this model.

Banks traditionally were expanding their business by opening new branches and serving customers through those branches and here is one bank, which thought it out differently, and instead of using a Branch based model to expand they decided to scale using Business Correspondents and Customer Service Points which allow them to grow aggressively. RBL bank after the takeover from their old management decided to go with a different path to grow their business. This business distribution model allowed them to grow more than 25% and which will allow them to grow in sustainable manner.

In the below Interviews of Mr. Vishwahir Ahuja he explains the business model of RBL Bank

Typically, construction businesses are capital intensive and require them to keep days or even months of inventory to deliver the projects in timeline and even after that for various reasons construction projects get delayed which degrades their profitability. In this sector here is one company which completes its projects before the timelines, manages its inventory so effectively that it does not have to give interest to the Banks on that and also gets repeated projects from the same set of clients on regular basis because of this.

They have created a process or model such that the projects get completed before the time lines. In Dec 2017 concall, Mr. PS Patel highlighted this that any employee from other organization cannot just come and will fit in PSP Projects culture, they have created processes, models in a unique way, which differentiates them from rest other. 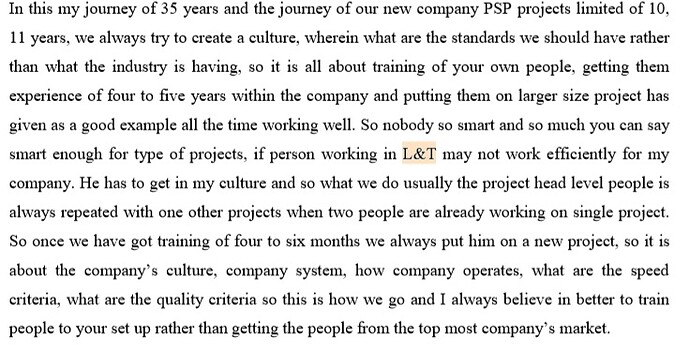 Disclosure: This is not a validation of Idea. Need to gain insights from fellow investors on this idea so that we can refine our Investment approach.I am invested in both of above companies.

D Mart has a unique business model of paying the vendor upfront and thus securing low cost providers. Along with it they own or long term lease most of it’s stores hence the operating cost become very low. Since volume growth is certain due to low cost than other retailer so it will hive them a definitive edge.

Also they are using Hub & Spoke model for expansion which made them easy to replicate the same process easily into new opened stores.