Hi all,
Markets are moving relentlessly in one direction and many of us are enjoying the fruites of the same. Time has come to take stock of the situation and discuss if the current upward move is forming some kind of a bubble in the market. I am presenting few of the signs that I have come across indicating that this may be the top end of a bubble.

sir, where can i get nifty pe.valuations

Markets are getting driven higher by pure availability of easy money from central banks worldwide. Some of that money is getting channeled to stock markets. If you see the global indices, India is by no means the only country where this kind of rally is happening. We are in completely uncharted territory here with near zero interest rates.

We have conflicting signals - domestic companies are having improved results and overheated markets. Time to definitely be cautious.

Indian Markets : obviously they are overpriced. There are 1300 stocks trading with 30 P/E +.

What will lead to bubble pop : No one knows. Maybe European banks will default. You can read about Deutsche bank. Or the trump will come US president. But no one knows for sure. Use this run to exit from weak companies.

I completely agree with umang. This actually is really scary. Also, look at the top gainers section daily.
You cant find any decent quality business at < 30 PE. Even some bad earnings are also not punished.
I think this is similar to jan 2015 and march 2015

For new cash it might not be the right time to enter, but if one is invested from lower levels, is there any merit in selling and holding cash as it is very tough to time the market and you never know if this territory continues for a while

In so far as the fundamentals of the Indian economy is concerned, the GDP is growing at a healthy 7 plus percentage…the country is coming out of a 2 year drought induced rural slowdown. this year there have been good rains and rural economy and rural consumption is expected to bounce…that will add maybe .6% to 1% to the GDP growth. The capital goods and infra sector is showing signs of bottoming out. Interest rates are coming down.

Infra and banking sectors are epected to recover in a year or two. Thus the fundamentals picture for india, going ahead is not so bad.

The fact that the market bottom that happened in Feb 2016 was exactly at 50 ema and RSi of 40 on monthly charts indicates that India is in a bull market and we are coming out of one year long correction (feb 2015 to Feb 2016).

I find that there is no objective basis to say that market is in a bubble territory at present NIFTY level of 8600…but after a continuous rise for 5 months, the market may correct for 1-3 months and even fall for 1-3 months or fall to support of 30 ema…but that would still amount to be a bull market correction / consolidation…it would still not be a bursting of the bubble. 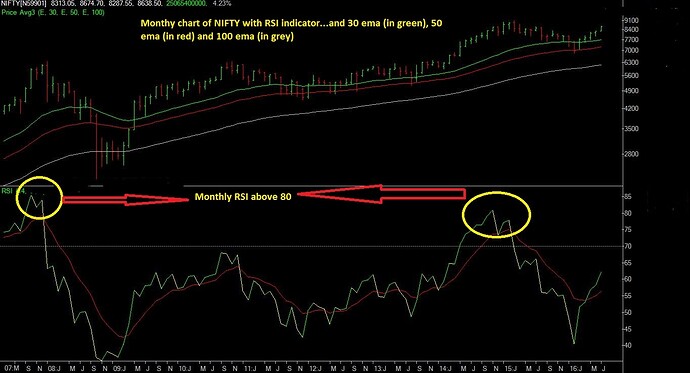 Strangely I think there is significant value in ICICI bank at CMP, the largest private bank (despite the increase in corporate loan NPAs), due to rapidly rising retail loanbook, rising CASA (45%+) and low interest rates (for foreseeable future). ICICI is the biggest private bank, this alone is a massive advantage. Views are biased here since I have a small part of PF invested in ICICI bank.

Looking at demographic pyramids can be useful imho

Have you read the “Demographic Cliff”??

DISC: About 30% of my equity allocation rests in cash for now… And as an added precaution, I’m putting Stop Losses on all of my positions (whichever are in the circuit range), daily, so that I may raise cash immediately in case of NIFTY P/E decides to come to a more, um “Sane” levels.

In Feb 2016 I was writing and posting relevant charts that the fall was not a bear market (as everyone else was saying including experts) but just a bull market correction and an opportunity to buy good stocks… and in just 5 months the talk has shifted from bear market to whether Indian market is in a bubble territory.

Again I am posting charts to show that this is just a normal bull market and not even the peak of the bull market…for RSi on monthly charts to reach bubble territory, NIFTY has to be around 13000…I guess that would still take another 2-3 years…that is just before the next general elections.

But that does not mean that we stay in loss making sectors…Retail investors are always better off being invested in sectors where earnings visibility is very clear.

No bro. I have been looking at demographics (among other parameters) before I heard abt people like Harry Dent etc.

I had done some back of the envelope calculation for a Mature stabilised running size of housing finance market (had posted earlier as well). so for anyone who is interested -

Average household size when Indian economy matures = 3 members per household (right now it is 4.8 for India , 3.1 for China iirc and 2.x for US, Germany, Japan etc)

Occupancy rate = 100% (meaning all houses are occupied, either owned or taken on rent)

For each and every house, let us say 15 lac loan is taken. Some people need no loan, some 5 lacs , some 20 lacs, some 30 lacs…
I have taken 15 lacs as an average for every new house bought. Your assumption here may be different from mine.

Let us say the loan is taken for 15 yrs period on average.

According to NHB (national housing board) data, it was 10 trillion rupees 2 yrs back growing at 20-25% cagr. So, at this point, it should be 15 trillion rupees.

That gives a 5 fold increase possibility till the time India becomes a more prosperous economy.

Compare with other countries: China’s home loan market is 20% of its GDP at this point BTW. And USA’s mortgage debt is 45% of its GDP.

but only quality ipos are getting subscribed heavily

Well quality is a subjective in bull markets. In 2007 everything associated with infra and power looked quality and there was sound logic to back that up. One needs to pull some money back to cash. Bajaj finance of the world are way to heated, I mean 7 times book are you kidding me…New money is definitely not to be committed right now. Its pure momentum, do not chase, markets would be here forever. Earnings are anything but flattering. Wherever earnings are there valuations are loafty. My only point is be careful, markets are not going to close, think twice to chase momentum.

Technically I predict a double top around 9k. Please differentiate between being a trader and investor if you are caught at top please and if u r a trader take yr stop losses in time

Maybe that’s why Raghuram Rajan said : India is a one eyed king among land of blinds. India is obviously on sure path to recovery but the whole world avoided effects of crisis with easy flow of liquidity. Their system needs a reset. Some companies need to go bankrupt. 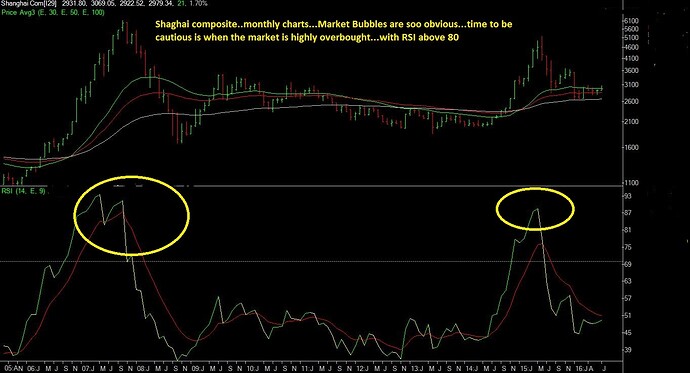 Lets us do a survey of major markets and find out which ones are so heavily overbought as to take them to a bubble territory.

humbled by your technical knowledge. In your posted charts I have observed that support ususally comes at 50 period MA and not at 30 period MA.

Also I checked few stock specific charts they seems to remain in overbought RSI situation for quite lengthy periods (in monthly charts) so how to play in that kind of situations, as most of the meat is coming in that last part of the bull run when the stock is overbought.