Blue dart express
Given the bombardment of advertisements that i see of all the online shopping websites, One of the direct benefactors is courier and logistics firms who serve them.

Of the two companies that are listed - Blue Dart and GATI, i find blue dart attractive for the following reasons

Disc
I have no holdings in the company now, but may initiate a small position soon.

Yes, they would be a huge beneficiary of the online retail boom but I’msurprisedto see the growth at about 20% till now vsexpectationof 25-30% growth rate

I think the major beneficiary of online retail boom has been Fedex and BlueDart. Fedex more so because of its strategic partnership with ebay.

not much activity here. any valuepickr tracking it?. i think the scale of opportunity is huge here. most of the online shoppers use blue dart. ( recently ordered a book from amazon.in. they used blue dart). all my banking related mails are delivered by blue dart.

its a monopoly here . in this business trust is the most important factor. i myself use blue dart for sending important mails even though they charge a huge premium compared to other players.

Blue dart seems a very very interesting stock to track esp in line with the online shopping boom… I too ordered some footwear from snapdeal and yes it too was delivered by blue dart.

I think from levels of 2000 odd there might be very little to lose and a lot to gain.

Would look into it closely and get back.

Sometimes I wonder that whether the company has such a big brand that it justifies a P/E of more than 40 times?

There has been no movement in the stock, Can someone please advise if it’s wise to invest in the company now.

comments in chart. Best of luck 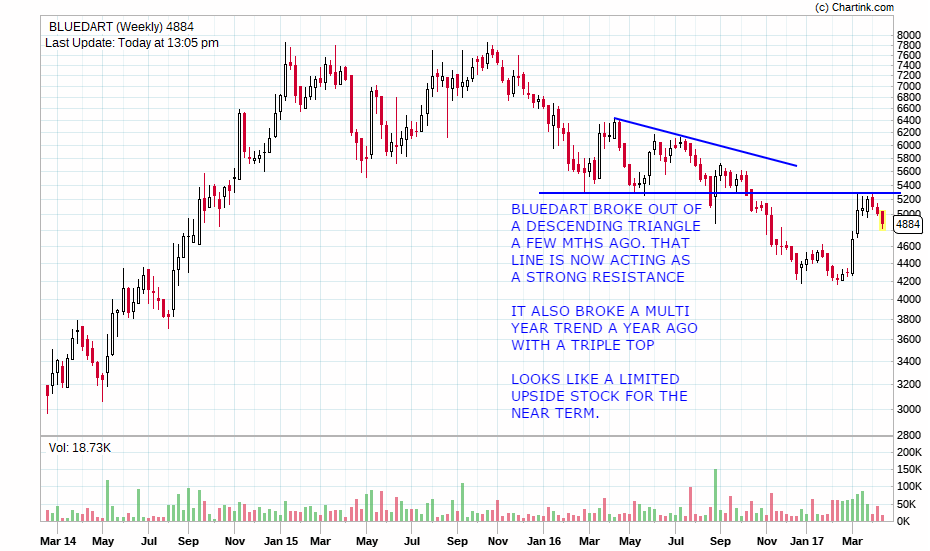 Blue Dart seems to have ended its down trend from 7850 at 3830. It has broken downward slopping trendline and closed this week with a very bullish weekly candle. Last quarter results were poor but technicals are indicating nice bottom

they are loosing market share in ecom space - which was main story for higher growth, ecom business as % of mix has come down in FY18. Also - in air freight - they are facing competition from spicejet (they are competitive with lot of belly space available). though great management, but demanding valuations are reasons. FY19 can be better due to poor base. however, not game changer.

I think from levels of 2000 odd there might be very little to lose and a lot to gain.

Any views on Blue Dart? It has not been able to capitalise on the B2C segment(ecommerce etc), while the B2B segment has grown in single digits only.
DHL worldwide is planning to make a serious foray into the ecomm business in India. They own 75% in Blue dart. They generate between 20-30% of their worldwide revenues from the e-comm segment.
Any views would be welcome please.

I feel local players are giving a good competition and hence blue dart is unable to penetrate… Also though B2C boom from outside looks to be attractive i dont think its going to give a huge revenue and margin like B2B where they must be getting confirmed repeat orders also.

Though bluedart as a brand is known to everyone , may be their strategy for indian market needs to be revisited.

Disclosure : I dont own any bluedart express stock and in doing a monthly SIP mode with TCI express. My opinion may be biased.

Reviving the thread here…
Company was super profitable from 2007 to 2018…
However operating profit margins have reduced from 15% in 2006 to 12.5% in 2018…
Had a look in screener…number tell that from 2007 to 2018 company had to do capex of around 980crores approx…
Produced free cash of around 700crores…
Assuming company gave dividends of 30 crores(last year 29crs , preceding year 35crores) for ten years. (300 crores).still lot of cash must be left…
However the investment section shows from 105 crores in 2009 to zero in 2018…
Where did that excess cash go??..
And why has the company borrowed around 491 crores in 2017… Which has come down to 418 odd levels…(is it working capital loans?)…
Curious about where the excess cash went??..
Anyone trackng the company can shed some light…

Probably something to do with the bonus debentures they gave to shareholders.

Blue Dart has reported over 20% revenue growth and robust margin expansion in Q3FY21. Company has started benefitting from the investment it had made in last three years. These investments have (1) expanded footprints (2) improved efficiency , and (3) reduced cost structure. Blue Dart stands to gain from rise in penetration of e-commerce in smaller towns. Currently e-commerce is about 25% of revenue.

Here is an old report on the logistics industry from Phillip Capital which shows how the different players are placed then and the capex heavy nature of the different LOB within logistics.

A recent report on the express logistics industry from Indian Chamber of Commerce: -

The most recent available concall was for Q1 FY23. During that time the company was facing fuel cost related challenges which was affecting their gross margins. Since then another quarter passed and the expenses seem to have grown way more than the topline. Price action was also negative, perhaps for this reason.