What is interesting about the company?
• Increase in aggressiveness of the group and induction of professional management: From being a sleepy management running decade old plants, promoter group and management has become aggressive with buyout of RCCPL and then announcement of brownfield and green field capex at Kundanganj (UP; 1.2 MT grinding unit) and Mukutban (Maharashtra; 3.9 MT integrated unit with 40 MW captive power plant & 10.60 MW waste heat recovery system [WHRS]) respectively. Kundanganj capex is around Rs.250 crore while the one at Mukutban is of Rs.2450 and expected to be completed in FY22. Post expansion, company’s total cement capacity will expand to 20.68 MT. 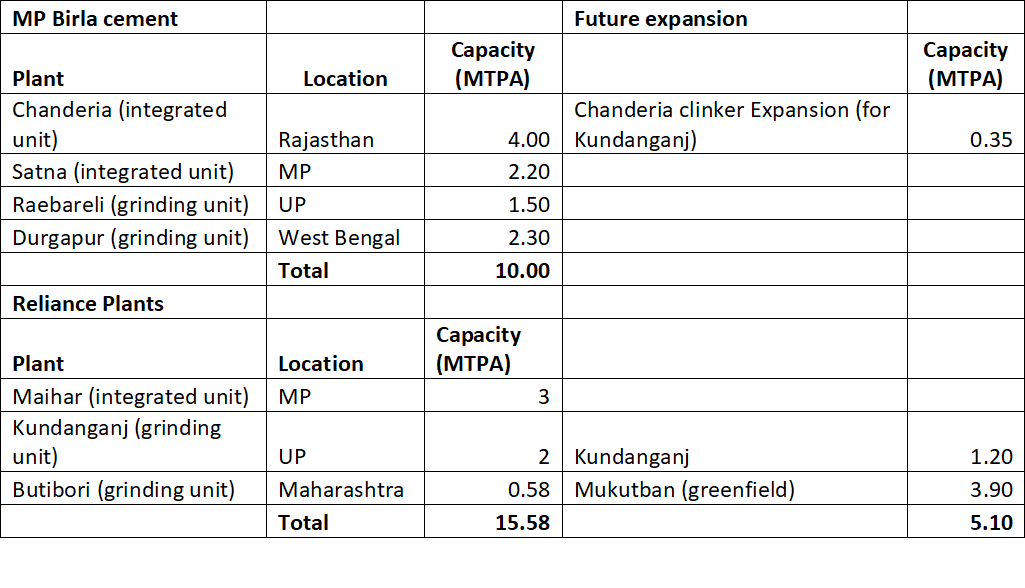 image1025×588 19.1 KB
Furthermore, acquisition of RCCPL was a well thought out decision as RCCPL’s cement unit commenced operations only in 2014 and are based on European technology with high operating efficiencies. Post take over by Birla Corporation, RCCPL has become the most efficient player in the central India with highest EBITDA/tonne. RCCPL also has mineral concessions in Maharashtra, Karnataka, Andhra Pradesh and Himachal Pradesh which can help the company in future expansions.

• Favorable demand-supply dynamics in central and north India: In cement, it is very difficult to forecast the demand and price dynamics. But one thing which can be analyzed is the new supply coming in the region. In terms of new capacity, not much new capacity is expected to be added and capacity utilization is expected to remain healthy going forward also for the plants located in the region. 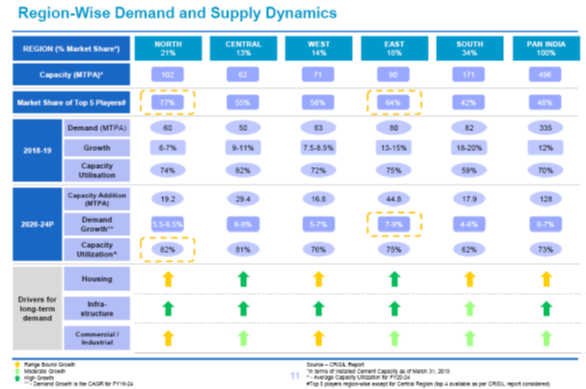 Various measures taken for improvement in operating efficiency: Over the past few years, the company has been taking various measures to improve its operating efficiency. These include setting up of waste heat recovery system (WHRS) at Maihar of 12.25 MW, setting up of solar plants at Chanderia, Satna and Maihar aggregating 16 MW, setting up of railway sidings at Kundanganj amongst others. All these measures are expected to improve the operating efficiencies further and increase the EBITDA/tonne. Furthermore, the company has one of the highest shares of blended cement in its total sales at 94% while share of trade channel was at 83% during H1FY20, amongst the highest in the industry. The company has hired experienced professionals from large companies including Ultratech, Lafarge, Holcim etc and they have taken various steps to improve the operations. During H1FY20, the company’s sales volume increased by 3.9% while the industry along with the large players saw de-growth in volumes. The company has been taking various steps to improve efficiency in logistics also including reduction in lead distances, judicious rail-road mix, improvement in turn-around time, increase in direct dispatches, better freight negotiations and digital initiatives. There has been significant improvement in performance of standalone company (which had much lower EBITDA per tonne at around Rs.500 – 600) driven by higher capacity utilization of Chanderia plant & increase in mechanical mining there (the operations of the plant have been impacted due to ban on regular mining of limestone at its Chanderia mines due to its vicinity to Jaisalmer fort). Furthermore, the mining capacity of coal mines feeding Maihar plant are being doubled.

High Debt: The company’s net debt will peak at Rs.4500 crore next year and has higher EV/EBITDA compared to its peers. However, most of these debt is long term debt and even the new debt the company is taking for Mukutban greenfield project is for 12 years. Furthermore, the company has a rating of ‘AA’ from all the rating agencies and the company has been able to raise new debt at lower rate of interest of less than 9%. In addition, some financial flexibility is derived from it being part of MP Birla Group. 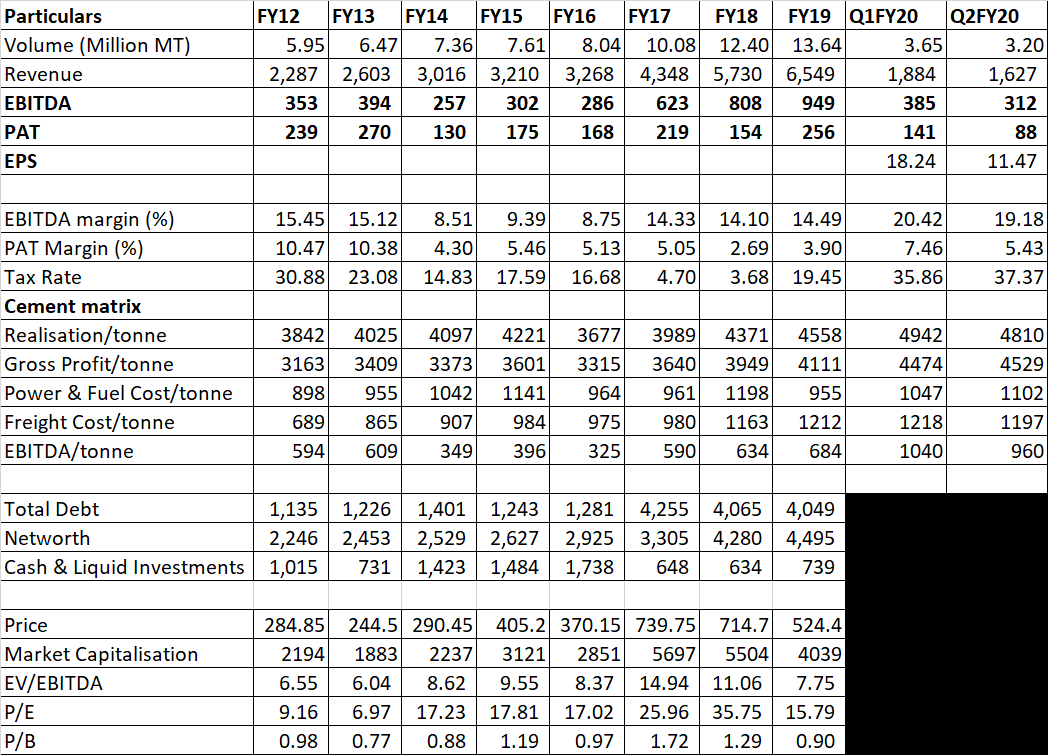 (Disclosure: Invested. This is not a recommendation or advice to purchase the stock) 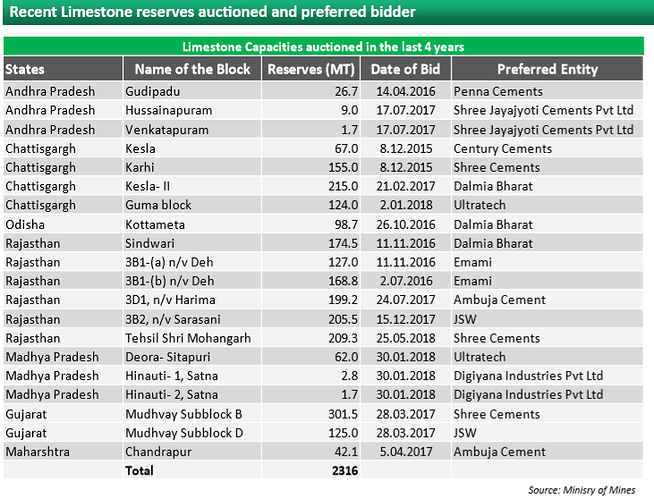 There will be improvement in the EBITDA Margin due to falling pet coke prices, soft crude, coal & slack prices .

Demand is favourable due to government has brought down GST rates for housing from 8% to 1% in affordable housing & 12% to 5% in regular housing which will provide boost to the sector.

This interview is a summary of all the points explain above by @ankitgupta
Birla corp recently won Coal blocks too.

For Quarterly updates please visit their website and go to press release section for updates. https://www.birlacorporation.com/press-release.html 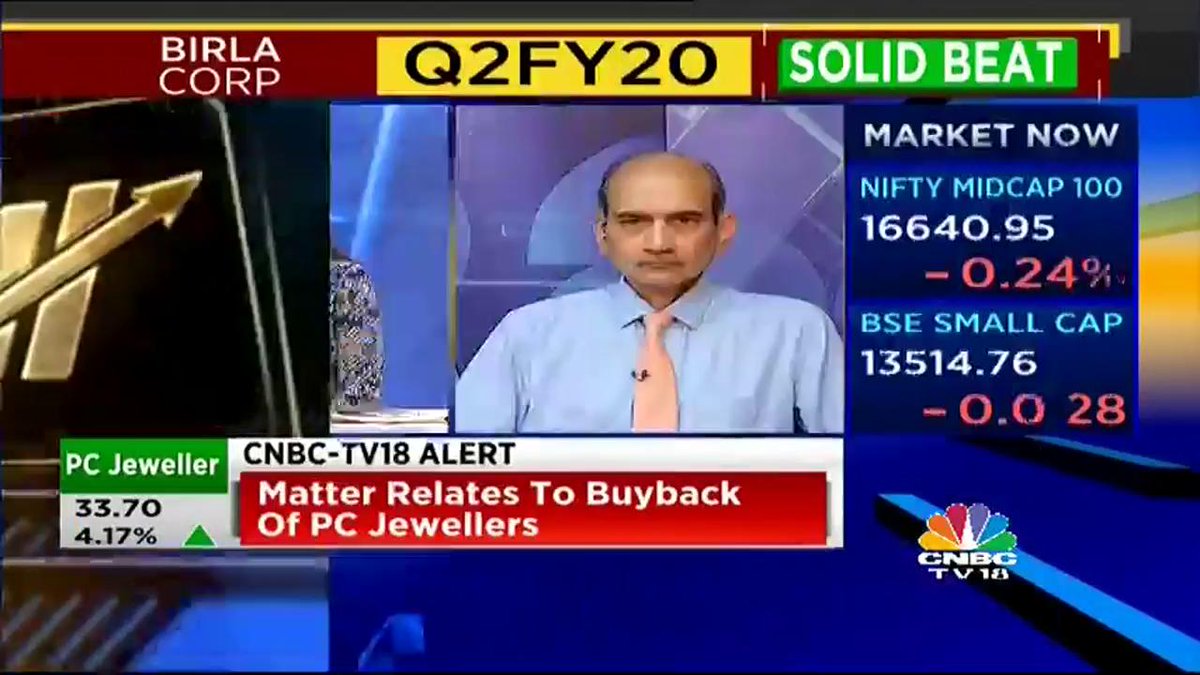 Birla Corporation has come out with decent set of number for Q3FY20. Volume growth of 7% in these tough environment is satisfactory in my opinion. There was softening in prices of cement across the country during Q3FY20. However, the prices have increased across regions like North, Central and West in January, 2020. The working of the quarterly results is given below: 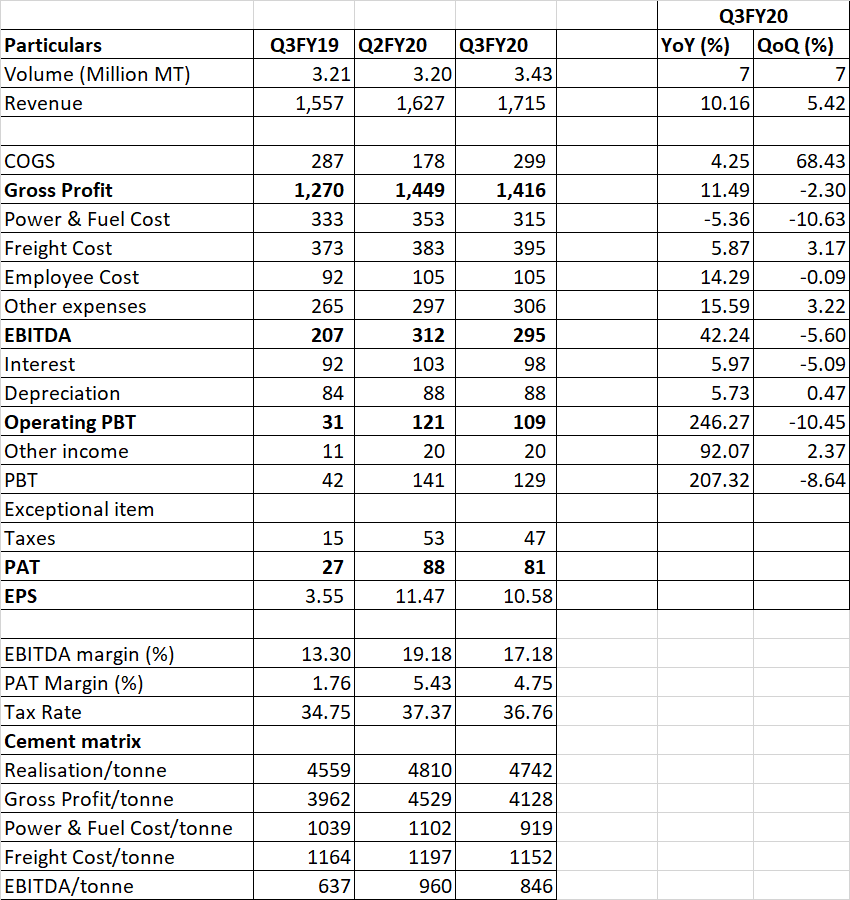 Management in TV interview post Q3 results highlighted about some green shoots for pick up in demand. The link is given below: 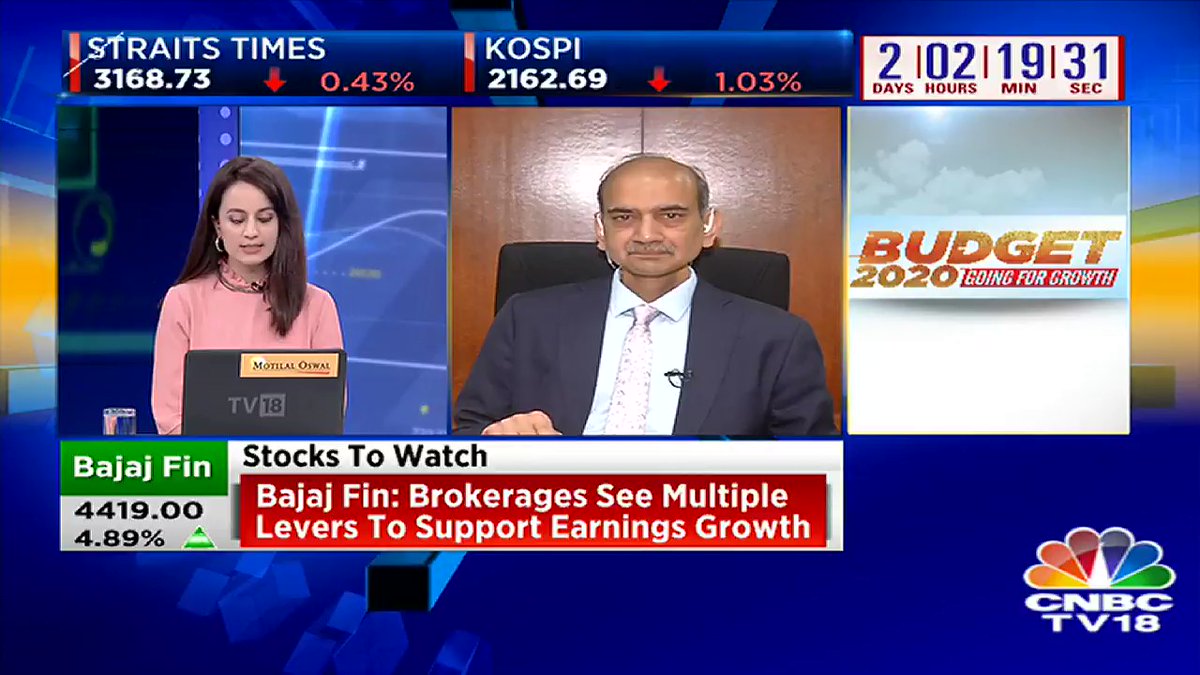 #OnCNBCTV18 | “Have seen some buoyancy in cement demand in Jan 2020, says Aditya Saraogi, CFO, Birla Corporation. Tells @latha_venkatesh @_soniashenoy that he expects the volume growth of cement sales to be 4-5% in FY20 https://t.co/OiUsm5WhEJ”

Fantastic work yet again and good details shared. Recent qtrs have been pretty good by the company, especially q4 (as you expected). However, as the stock reaction has been opposite, I was wondering about the risks:

s shared. Recent qtrs have been pretty good by the company, especially q4 (as you expected). However, as the stock reaction has been opposite, I was wondering about the risks:

Debt: Although, I am also new to cement industry but from whatever I understand cement companies are high cash flow generating companies. They hardly have any working capital requirements and most of the PAT is largely converted to cash. Let’s look at the cash flow from operations of the company during FY17 - FY20 (post acquisition of Reliance Cements):

If we look at the debt trajectory of the company, its debt increased primarily in FY17 when it acquired Reliance Cements for enterprise value of Rs.4800 crore. Currently, the company is undertaking capex at Mukutban, Maharashtra to set up new cement plant with capacity of 3.7 MTPA with total cost of Rs.2400 crore and debt of Rs.1625 crore. The project will get completed in June, 2021. Gross debt will peak out around Rs.4500 crore in FY21 as indicated by CFO in one of the TV interviews.
As on March 31, 2020, the company had gross debt of Rs.4226 crore and cash and liquid investments of around Rs.700 crore. Furthermore, close to 4100 - 4150 crore of debt of the company is long term in nature. Most of the cement companies are able to borrow for a long tenure. The company has a credit rating of ‘AA’ from both CARE and CRISIL. For Mukutban project, the company’s term loan of Rs.1,625 crore has maturity of 12 years. This is a snippet from the Q1FY20 press release:

Despite the performance of the company being impacted during FY21, given its liquidity, strong cash flows and long term nature of debt, I personally dont think debt will be a challenge for them.

In his speech about his learnings in the stock market, Jatin Khemani mentioned that the market rates cement companies based on their capacity. 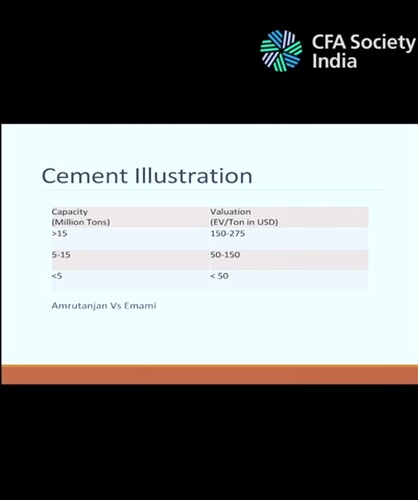 I checked the current valuations in terms of EV/EBITDA instead of EV/Ton to keep things simple.

The outliers are Prism, Birla, Dalmia, ACC and Ambuja. Prism has single digit Op Margin and huge debt. ACC and Ambuja have merger issues. The odd man out are Birla and Dalmia.

JK Cement, Ramco and even India Cements are trading at double the EV/EBITDA of Birla despite having lower Sales. By FY21 end, Birla will add 5.2 MT capacity. Re-rating has to happen?

Looking at Birla’s historical EV/EBITDA, it is trading at the lowest level in the last 10 years! 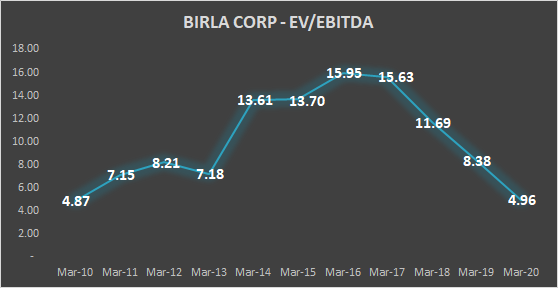 A big mid-cap is trading at small-cap levels.

Hi Ankit, good analysis. Any clue till what time Subsidy will continue for Reliance Plants, Birla Cement plants the subsidy is already over I believe. What impact will it have on the profits once subsidy goes away.

In a Jan 2020 interview, Mgmt said its Rs.300 per Ton on a standlaone basis for Reliance plant. On a consolidated basis, it is Rs. 100 per Ton or Rs.30 Crores absolute value.

Thanks @ankitgupta and others for contributing to the post.
Have been trying to study the business and industry for the past few days and here are some of the things I noted:

Looking forward to some guidance for going ahead with my analysis

Let me try and answer few of your questions:

1. Where exactly is the growth going to come from? In cement, what I have realized it is difficult to predict demand. Even the best of cement analysts, will not have any hang on the demand projection. The only thing which you can predict is the supply (existing and new). New supplies can be predicted as cement companies take atleast 2 - 3 years to develop a new greenfield project. I doubt if branding plays a big role in cement. From whatever studies I have done on the sector, it seems that north and central region has least new capacities coming in and better demand - supply dynamics. One important point to note is that over the past decade because of lackluster demand from real estate and infrastructure sector, cement prices on a pan India level havent increased even at the rate of WPI inflation.

 BCORP, the flagship company of M. P. Birla Group, has its presence in North, Central and East regions. It is expanding grinding cement capacities by 25% in West region, which should aid volume growth in mid-FY22/23E and
help it touch 19.5mt capacity. The recovery in cement demand in North, Central and East markets has surprised positively post easing of lockdowns. It derives 43% of its sales volumes from the Central markets (26.6% in UP and
16.6% in MP), 25% from North markets and 29% from the East.

 BCORP has taken cost savings initiatives such as: 1) solar power plants of 16MW which may yield cost reduction of Rs10/ton and
2) participation in coal block auctions which helped it to secure two coal mines – cost reduction of Rs68/ton is possible when mining starts. Apart from this, replacement of clinker transport from Maihar, MP to Mukutban, Maharashtra plant may help cost savings of Rs231mn (Rs13/ton on a blended basis) for Butibori, Maharashtra grinding unit. Incentives from various state governments should boost EBITDA by 12-16% till FY23E.

In the sector,
companies that expanded capacities have generated higher stock return. 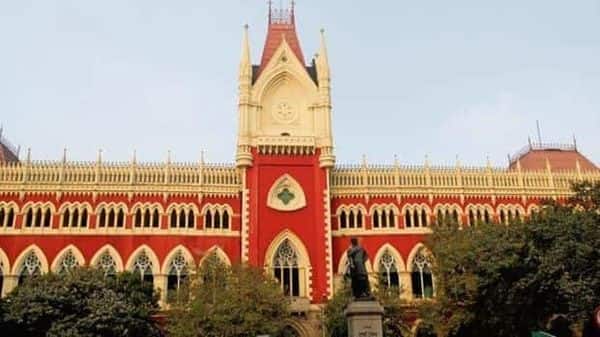 This order is a significant victory for the extended Birla family, which is contesting the legal validity of Priyamvada Birla’s will.

I had attended the AGM of Birla Corporation. Some of the points I noted during the AGM are highlighted below:

Thanks @ankitgupta for sharing these wonderful and detailed notes. The capex plans looks very encouraging along with reduction in debt levels.

Some interesting points on the same in this recent credit ratings report:

Also, overall trajectory of RoCE is also improving which is a good sign.

Disclosure: Tracking. Only for educational purpose.

What according to you is the reason the market is assigning low valuation to Birla Corp compared to its peer companies? Is it only due to the ownership battle or are there other reasons as well? And if the case is finally decided in favour of the Birlas, how will it be viewed by the market? Can you share your views please.

Bullish commentary from Edelweiss few days back -
BCL: 1) Operations have largely stabilised post the turnaround, with the company consistently clocking an EBITDA of over INR 1,000/t;
2) Upcoming 5 MT capacities to drive market share gains
and reduce concerns over growth constraints; and 3) De-leveraging from FY22 onwards to drive a further re-rating
At the CMP of INR 741, BCL trades at 6x FY22E EV/EBITDA. Our target price of INR 1,170 per share
(8x FY22E EV/EBITDA) implies an upside potential of 58%.