This approval for biosimilar came, about a month ago and restricted to 1 drug, as far as I know - namely Neopongen/Zarxio (Sandoz’s equivalent for Amgen’s Neopongen). As if the amount of litigation isn’t enough in this filed, another long drawn court battle resulted in Sandoz (Novartis) winning its case in late March.

)- While everyone is terming this as historic and there will be a fear of flooding of cheapos from India, China - my 2 cents - may not happen. At least not so quickly. It is because of the sheer amount of process involved for each approval, plus not to forget the slew of litigation that will follow.

Biosimilars review process is in its infancy and there is a long road ahead before the bureaucracy weaves through it. Even in a billion $ blockbuster cancer drug like Neopongen (if I remember right, Amgen’s patent expired in Europe back in 2006) that enjoyed zero competition from its approval back in 90s, it took so long for FDA to approve, through varied set of committees like the oncology review committee.

)- moreover, biosimilars are selling in Europe already. Although there will be some effect here are there - it may not result in flood - that is my immediate verdict.

Hear are some useful links for further review and discussions

What Will the Growth of Biosimilar Drugs Mean for RA Patients?

The FDA approves its first biosimilar drug. For rheumatoid arthritis patients, biosimilars could be the treatment they’ve been searching for.

What can be the next biosimilar drug that may get an approval? (one can never predict these things but based on varied set of publicly available info, this may be the one!!)

Celltrion, the Korean pharma firm is seeking an approval its rheumatoid arthritis drug and to make the matter easier - it is already a top selling blockbuster drug in Europe.

WSJ had a table a few months ago

As biosimilars production is extremely complex task/process, I am guessing we wont see other Indian companies jumping into it.
According to a report biosimilar market would around 20 billion by 2020. I request other members to share their views.

Few Extracts from Cadila Healthcare Annual report on the topic of BioSimilars. 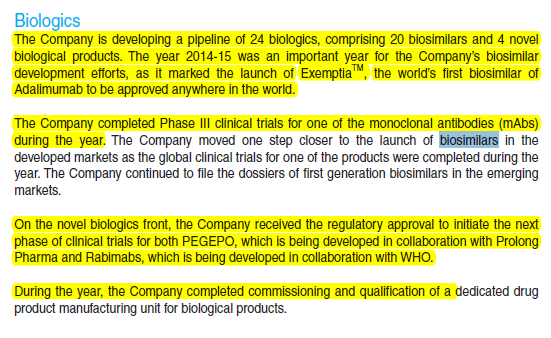