Beardsell Limited was incorporated on 1936. Formerly known as Mettur Beardsell Ltd. The company currently has 7 manufacturing units across India and branches in all the major cities. There are multi-disciplinary teams consisting of experienced professional managers, project engineers, production technologists and R&D personnel at its various branches. The company is in the business of manufacturing, selling and contracting activities and has the following divisions: 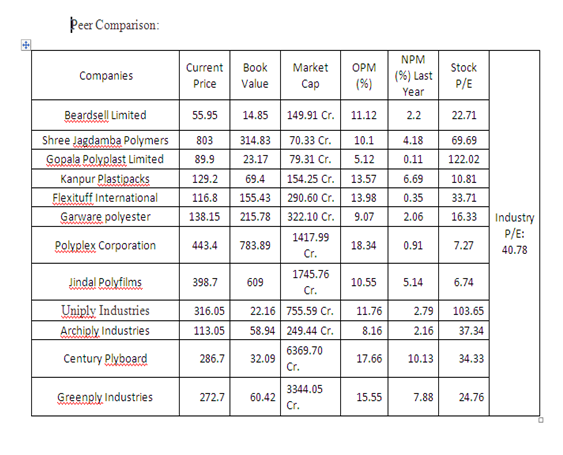 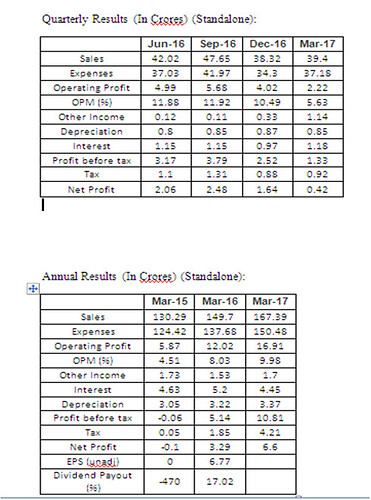 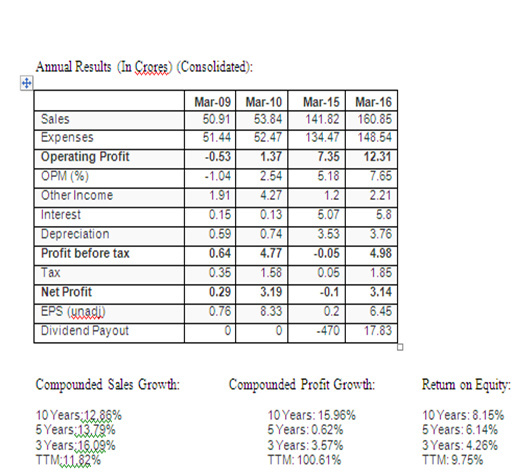 With such a low return on equity, I rather put money in bank and so should this company.

It is a competitor in our business & as far as we know they are under reporting profits, also their marketing team is not upto the mark and are very difficult to deal with. They are long ago established business & they have all the legacy clients, their sales growth is more due to price increase rather than volume increase. will be interested once they start reporting actual results

If they are under-reporting profits, then management quality is doubtful.

As you said it would be interesting when they report actual profits. Then this could be hidden jewel.

Another thing is they seem to have the pricing power. But will it sustain?

They used to have pricing power, but now there are sufficient players in all the cities they operate. They never tried to capitalize on their leadership position. They still have some major pharma companies as their clients and if they can manage them well, they can give good returns.
Also, the business is majorly dependent on crude & rupee, if crude declines & rupee appreciates they stand to gain and loose when vice versa. This happens because they are not able to pass price increase and thus shows that they have limited pricing power.

Interesting. Can you elaborate on the competitive landscape and any other insights on beardsell?

The entry barrier for their primary business is not that high, not sure about their panel business & how well it is doing. Their Packaging & Insulation products are quite generic now, previously around 10-12 years ago there used to demand for product manufactured by Beardsell and they had little brand identity, which is now not seen. Also all the packaging & insulation products they manufacture are easily replicated and sold at cheaper price by competitors. Once their existing customer looks out for same product he usually gets a cheaper & better option in terms of business flexibility and never goes back to them.

This is my general experience of company & the market of Mumbai in which they operate, they might be doing better in other locations depending on the team over there.

Thanks for the inputs. How are their isobuild & quickbuild systems? Any insight on that would help

No Idea on those segments

Only few and specific industries requires Clean Room based on the kind of operation they carry out. Once established, it can be used for many years with minimal maintenance. This is not a repeat business. As such it would be interesting to know the revenue from clean room business as compared to their total revenue.

In 2013 it introduced its new product line ( SteilWallz ) after a stagnating topline. The change in the business focus is evident from the management commentary. From 2013 onwards there is stark difference in the business numbers.

The current debt level of 28cr seems to be reasoable compared to its sales of 169cr. Its interest coverage is 4.4 which is also manageable. The balance sheet seems to be holding up well.

Coming back to present day, the company seems to expanding rapidly with its prefab product Steilwallz as this article suggests.

Beardsell to set up two more units for prefab products

There are some other pointers as well

in 2016 it appointed Abhaya Shankar as President – Business Acceleration and Strategy. Earlier he was MD of Hyderabad Industries ( the market leader in roofing solutions with their brand charminar ). Then he had a stint with Kisan Moulding a polymer pipe player.

In Feb 2016 it also acquired M/s. Sarovar Insulation Pvt Ltd - a company engaged in engaged in the manufacture and processing of EPS products at Coimbatore and at SUPA, Ahmednagar, Maharashtra following a JV with Saideep Polytherm a Pune based company again engaged in EPS manufacture & supply.

All these dots seem to suggest that Beardsell has spotted an opportunity in the Pre Fab segment and is refocusing its energies rapidly. Beardsell is also one of the 16 companies mentioned in the “Compendium of Prospective Emerging Technologies for Mass Housing” prepared by BMPTC ( Building Materials & Technology Promotion Council Ministry of Housing & Urban Poverty Alleviation Government of India)

With the govt push towards prefab technologies one gets a sense that good times for Beardsell are ahead and it is well positioned to exploit this opportunity.

Disc - Have a beginning position so views may be biased.

As alluded in my topic post there is a lot of talk on AH. Developers have still yet to fully put their weight behind this govt objective because even with all the sops its still not stacking up financially for them. An extract from the recent Oberoi con call [image] Another extract - from a the recent ahluwalia contracts concall [image] And kolte-patil is “still” evaluating AH ( from god knows when ) [image] There are several such indicators if you go through the transcripts, AR’s, int…

Lot of traction with Govt orders.

Sebi has slapped a fine of Rs3 lakh on Beardsell Ltd for not making the necessary disclosures within the prescribed time frame under SAST (Substantial Acquisition of shares and Takeovers) normsvhttp://www.livemint.com/Money/0Pqc7lK8xxDo3thYiILyqM/Sebi-imposes-Rs3-lakh-fine-on-Prime-Broking-for-violating-br.html. News on July 14,2017.Is company poor on disclosures/buisness reporting now too??

Request you to share the source of this guidance

Source is the FY17 AR

Here are some interesting video links

A poor quarterly show by beardsell.