True Sir. That is precisely the point and hence it is available cheap today. I am talking from a long term perspective when the situation improves and both the plants are operational. This is a 5 year view as you can see in the table here.

The above 5 years of extrapolation are not correct. The question here is about demand in the market, not supply and manufacturing capacity. Atul Auto hasn’t used 100% of its capacity utilization till now. So expecting sales around 1,20,000 units in next 5 years is too optimistic.

Have been tracking month on month numbers and I agree that the execution is nowhere near the levels I had imagined specially in a Post-Covid environment. My view on the stock has changed.

Since the execution doesn’t stand upto our assessment, we have exited Atul Auto in our smallcase portfolios too. Will start looking at this once they get to a decent level of utilization.

Here are my notes from their AR22

Below are the detailed business metrics since FY07

Aug 2022 3W sales data from FADA. Looks like there’s quite a bit of competition for Atul Auto and also evidence that electric 3W sales are increasing. Atul Auto being an experienced company would come through their sales issues and start showing improvement moving forward 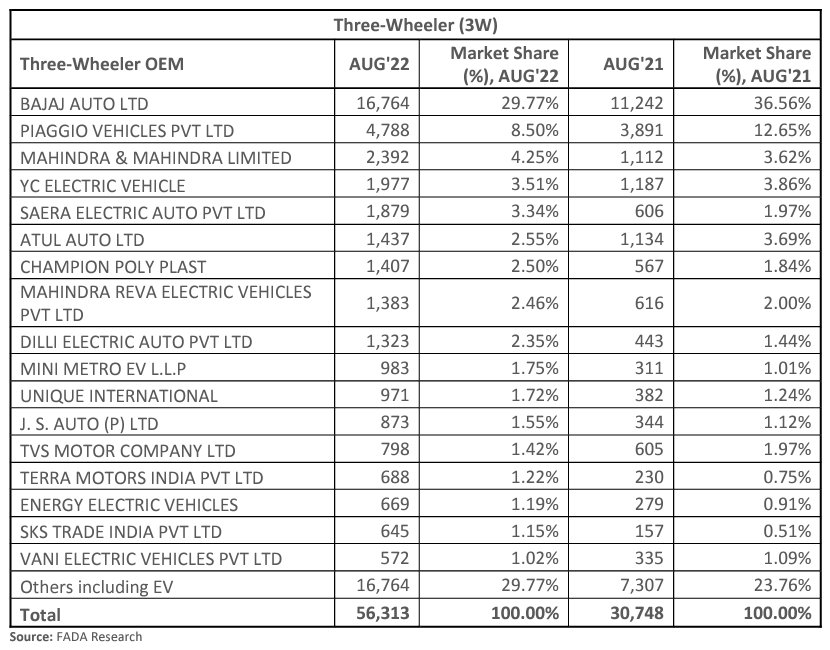 I attended Atul Auto’s AGM and am sharing my notes below. Questions are highlighted in bold.

1. Its impressive to see growth in spares and e-rikshaw sales. Congrats on that. Coming to our core operations, can you give a split between diesel vs non-diesel vehicles in overall volumes and our plans to grow non-diesel volumes?
Sales composition for Atul Auto is in-line with industry (SIAM figures are 27% diesel + 60% alternate fuel + 9-10% EV)
For Atul auto, alternate fuel 3-wheeler accounts for 57% of FY22 sales. Sold 9336 alternate fuel vehicles in FY22 vs 2697 in FY21. Were late in seeding the market

3. In the past, we used to share a sales breakup across different models. Is it possible to share the same for FY22 and FY21?
Get in touch with IR to get this data

4. We reached peak sales volume of 5500+ in export markets in FY19. However, this has come down to 1605 in FY22. However, our competitors like Bajaj auto and TVS have not seen such large de-growth. Can you talk more about this?
Exports have picked up in FY22 and is picking up month on month. Currently in seeding phase and getting some repeat orders. Africa has a volatile economy, monthly numbers may not give exact scenario. Expecting higher volume in FY23 vs FY22. In long term, expect exports to contribute 20-25% to overall sales

5. When do we plan to start selling EV 3W? It seems that despite having a strong distribution base and our own manufacturing, a lot of start ups have taken the lead.
Currently selling L3 category (lead acid battery powered) 3-wheelers. Right comparison is with L5 vehicles which will be launched in a couple of quarters. For fixed battery vehicles, batteries will be manufactured by Atul Greentech. For swappable batteries, have tied up with Honda and batteries are currently under trial

6. We used to have 200 primary and 130 secondary dealers until FY18. Have we ramped up our dealer network and how many dealers do we have now?
More or less this no remains the same

7. Can you talk more about our NBFC operations. What are the NPAs in this business, and do we exclusively finance our own vehicles?
Khusbu is exclusively funding Atul 3-wheelers (70% of book). Also funding 2-wheelers and LAP. Have seen stress in the 3-wheeler segment and restructuring loans where there is a potential of money coming back. Pre-covid book is still not out of woods and should run off by FY25. Portfolio built after 2nd COVID wave is performing well
In terms of capital adequacy, Khusbu is adequately financed and company does not have plans to infuse further capital in FY23. Will come back with fresh plan with pickup in growth
Have tie-ups with regional and national NBFCs (M&M, IndusInd bank, Hinduja Finance, AU Small bank, IDFC First bank, regional NBFCs like Kanakdurga Finance)

8. Our stock price continues to trade at very low valuations. Any thoughts of management on value un-locking?
Focusing on improving business

Thanks for sharing the details. Did they give any indication on when the sales volumes will go back to pre-covid levels? Also, is the current production capacity is 1,20,000 vehicles per year (due to the recent capex) OR when do they expect to get to that capacity levels?

No, they were not sure as to when they will get back to pre-covid volumes. Please note that pre-covid they did maximum volumes of 4000-4500/month which only translates to around 50’000 vehicles a year. So reaching 120’000 a year looks like a tall ask.

Disclosure: same as before

Yes, getting to 100,000 unit sales will take some time but just wanted to understand if their capex is already done or if it will be completed in current fiscal. I was hoping them to clock 60-70k sales in next fiscal.
As similar to PV, have the prices of 3W autos also have increased? I am sure EV autos will be sold at higher prices but even other models?

FADA numbers for Sep month. Some mismatch in Atul Auto’s numbers due to non availability of data from few states (as the disclaimer says). Company reported Sep sales of 2250 vehicles as per exchange disclosure 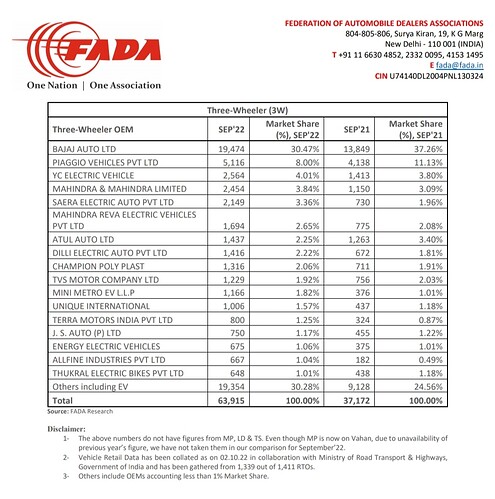 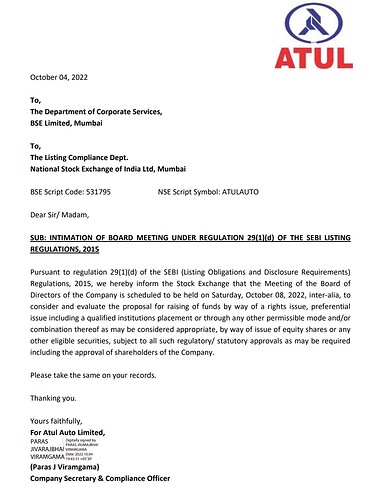 Marketshare of leaders is declining and Others is increasing, indicating more fragmentation of the marketplace. Not a good thing from investor point of view.

Did the company management indicate the need for fund raise?
Also, with this allotment, Vijay Kedia will hold close to 20% in Atul Auto and he is also been allotted a significant minority holding in the subsidiary Atul Greentech. Would like to understand the interest Mr. Kedia has in Atul Auto business 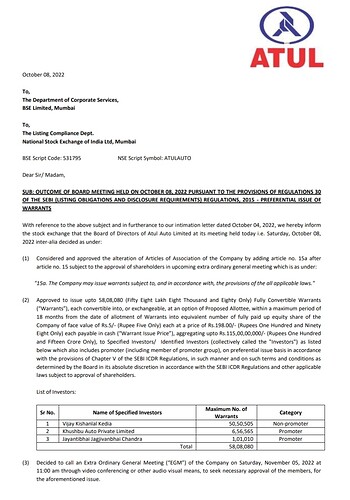 2. Considering the alternate scenario of Mr. Kedia buying for the long-term - Can a small player like Atul Auto match the big players in terms of technology, investments and market reach? If he thinks they can’t, Mr. Kedia will not want to buy a stake for the long-term?

3. Apart from the conventional players like Bajaj Auto, Piaggio, TVS and M&M (market leader in EV 3-wheelers), Murugappa group’s TI cycles has recently entered EV 3-wheelers and there are also startups like Euler. Could these players be interested in Atul Auto’s strong brand and presence in Gujarat/Rajasthan, the distribution network and manufacturing base? Also, possibly a foreign player sees a big opportunity in the EV 3-wheeler space in India and wants to enter through a strategic partnership with Atul Auto?

It’s surely a big development as the company has been struggling and seems to have lost market. Perhaps the biggest driver would be if they can do something good on the EV front (we should focus on this and keep a tab)

Thanks for sharing it. It is very informative. Could you please let me know where I can download it for the previous months?

Please check the below given link for the monthly sales data

Founded In 1964, Federation Of Automobile Dealers Associations (F A D A), is The Apex National Body Of Automobile Retail Industry Engaged In The Sale, Service And Spares Of 2/3 Wheelers

I think the money raised my Vijay kedia and promoters will be used to pay of part of standalone debt and for further working capital needs.

Speaking to ET NOW, Jitendra V Adhia of Atul Auto Ltd spoke about Atul Auto's capacity, sales outlook, EV-3 wheeler launch, fundraising plans & its utilisation, which will mainly be used to repay the debt. Moreover, he discussed how the market is...

The Atul Auto CFO says the Rs. 115 cr will be used for repaying debt, working capital requirements and general corporate purposes. There’s something more to this?

1. The stock was rising exponentially during this period.

5. Noticeable change in annual report from FY 10 to FY 13: More attractive to look at - colourful, better design and font, more pictures, more details about the company and bullish commentary by management.

6. Many interviews by Mr. Kedia (in the capacity of Director of Atul Auto) on the company and bullish outlook.

7. Gave this interview in the capacity of an investor during the time he was selling Atul Auto shares: Management of a company my first priority before making investment: Vijay Kedia, Kedia Securities - The Economic Times

I found this old comment by @ashwinidamani in this VP thread instructive:

"A. How many people know Ramdeo Agarwal vs. Vijay Kedia (purely meaning who commands more glamour following and publicity)

B. By transferring 5% of his shares he has suddenly attracted more visibility/publicity for the stock

C. By transferring 5% of his shares he has attracted more value for every balance share which he holds.

Net Net he has created more value by transferring merely 5% of his holding. Isn’t it a win-win deal for him.

You need to unlock value someway–he is doing it the smart way."

Based on the above, could these be some possibilities behind Mr. Kedia looking to increase his stake to almost 20%?

1. Something similar to the 2012-2015 cycle repeats as he converts warrants in the coming months? This article from Business Standard mentions: “One possibility could be contract manufacturing for an upcoming electric 3-W player domestically.” Is he timing it right to ride the coming tailwinds for Atul Auto?

2. Sell out to a strategic investor and get a great exit or something along these lines?