Hi,
Myself Aswin, 29 year old salaried individual and I’m new to equities. Started investing in Jan 2017. I’ve been delaying from requesting a review of my investments fearing dilution of the quality of discussions in this forum. Of late I’ve been investing a sizeable portion of my savings into equities and when I look back, I understand that have been doing it in haste. To be honest, I need to take a step back and analyze what I’m doing. Hence I request you to review my investments. 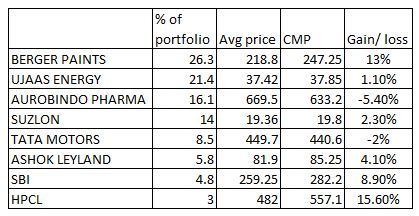 Berger paints: Invested in Jan 2017, when the markets were recovering from the effects of demonetization. Read news about their setting up of a new plant in Assam to cater to the requirements of North-East. Recently they started a plant in Pune also. Rising demand in the decorative and industrial paint sector are some of the positives for this sector.

Ujaas Energy: Invested a major chunk after Feb 22, when their promoters sold off a portion of their shares to fund new projects. The central government’s drive to promote renewables, especially solar rooftop, coupled with the fact that Ujaas energy is a leader in this sector attracted me.

Suzlon Energy: Articles in this forum on Suzlon being a turnaround story grabbed my attention. Suzlon’s latest S111 120m diameter turbine with PLF > 37%, decreasing debt etc looks good. I was tracking this company when it was in the mid 16s, but invested only recently. However, I consider this to be a risky investment in the short term, given the entry point.

Aurobindo Pharma: Their long list of ANDA approvals and acquisition of Portugese company Generis are positives. Read research papers citing capacity expansion (3 new formulation plants), which will positively impact their sales. Downside of the impact of USFDA is a concern and need to see how it turns out.

Tata Motors: Rising volumes and sales of Jaguar Land Rover in UK, EU and China and capacity expansion in Slovakia are positives. Supreme Court order on BS-III ban is a negative impact and I felt that the CMP is attractive. If they could export the old BS-III models, that would be good news.

Ashok Leyland: Same as Tata Motors with respect to BS-III. They are trying to increase their exports and have recently struck a deal to export engines to the US. Their use of IEGR system (intelligent exhaust gas recirculation) over SCR for BS-IV engines which does not require re-routing of piping looks interesting.

State Bank of India: Bought SBI in Jan when the banks were rallying. There was news of merger with other banks which would improve the efficiency and profits in the long run.

Hindustan Petroleum: Pricing power of OMCs to set the retail fuel prices attracted the most. This is a share I neglected all along. I should have added more when it was hovering in the 500-510 range.

Invest in 10-15-20 stocks which has equal potential for gains. In India, where policies change abruptly and most promoters are not the very best when it comes to ethics, businesses are never safe proof.

I personally believe BJP should continue to rule India for the next 10-15 years at least. Now at this, one should ask do they believe India will come out more stronger ? I personally believe it should and hence I advocate below stocks/sectors where once should concentrate more especially for ones whose investment horizon are 10 years plus.

Construction Sector - Lots of investment will be deployed in building better roads, highways, buildings, waste management etc. L&T is one shop all. Va Tech Wabag is another unique company which is into waste management, should gain a lot from river cleaning projects where most of them are just way too polluted. You can also include one of the major cement companies or maybe Asian Paints at reasonable valuation.

Defence Industry - The way world is built by Humans, this industry will just grow. And now with focus from the Government, L&T, Tata Motors, Bharat Forge, Bharat Electronics should do well if government delivers on its intent to make more and cut on imports.

Annual Return of 15-20% is more realistic to expect.

Disclosure - I hold all the above mentioned stocks.

Ujaas and Suzlon doesnt deserve that kind of allocation. i was suggest trim those and spread it to below four names.

Been 3 years since I started investing in equities. Had hopes of investing for the long term but the last 3 years have shown that I’m more of a short-medium term investor. Have made numerous trades but it consumes a lot of energy. Want to construct a portfolio.

Just updating the portfolio in its current form for future reference. Needs a lot of changes. Nifty at 11200; -10% from recent high. Global markets look bearish.

Aswin_PF841×328 16.3 KB
A portfolio should have more stable businesses than cyclicals/commodities.

14% in coalIndia, 8% in Manorg, 12% nationalalum looks risky.
I would suggest to switch to better stocks using the meltdown in the market. This is a good change to get rid of past mistakes.

You shall consider HeroMotors, ITC, CDSL, L&T and several other companies which are available at decent valuation for new entry.

Hi, thanks for the response.
I however differ about your view that investments in Coal India and Nalco are risky. IMO the negativity for both the companies arises because they are PSUs at a time when govt owned companies are being milked for dividends along with regular talks of stake sale.

Coal India looks good at CMP. They are expected to come up with good results for March quarter. Production from Mahanadi and Eastern coal mines which was down due to heavy rains is back to normal or even better. Expectations of a good dividend. There are signs of power demand picking up. All these augur well for Coal India. I’m more worried about changing weather patterns wrecking havoc to mining companies.

Nalco is in a different situation though. Although they are the lowest/ second lowest producer of Alumina/ Al in the world, their margins are suppressed due to falling Al prices. Falling prices due to trade war and recent virus issues. Virus issue will resolve and so will trade war. Couple of years down the line people would be talking of electric vehicles and upbeat about increased demand for Al (chassis, Al-air batteries etc). It’s all about the narrative.

In the meanwhile I’m comfortable holding on to my paper losses, thanks to Nalco’s zero debt and high cash reserves. Capex is also in the pipeline though it’s a bit far off (completion by end of FY23). Valuation looks enticing. If it were not for Coronavirus, prices wouldn’t have corrected as much as it has now. As and when profits increase, dividend yield would also improve.

Mangalam Organics- Agree, clearly a mistake. Being a cyclical, I should have timed it better and exited at 400-odd levels.

@ashwin Thanks for the explanation, yes I agree that these contra bets could do well once the market turns bullish. But do you think these companies has potential to run north for the next 3-5-10 years? If you think that you will be comfortable to hold Coal India even when the price is up by 100%, it makes sense to allocate 14%. If you think that you would be selling it at that price it is better to chose solid stocks instead. As at that point of time you won’t be getting solid stocks at current price.

I am not against these contra bets but not favouring in having them as top 5 allocations. I feel this cycle is good time to construct the core portfolio so one must double check their stock selection.