Astra Microwave Products Ltd (Astra) designs, develops and manufactures sub-systems for defence and space applications. Its strong R&D, technical capability and established record places it ahead of its peers. Order book of more than 3x FY12 revenues provides visibility for the next two years. Healthy growth in defence capex and increase in the governmentâs focus on indigenous manufacturing will keep its order book healthy. However, increasing competition, volatile earnings and lack of succession plans are key risks. We initiate coverage on Astra with a fundamental grade of 4/5, indicating that its fundamentals are superior relative to other listed securities in India.

Strong R&D, experienced team and established track record provide an edge Astra has a strong R&D set-up with four in-house facilities and highly qualified and experienced personnel. The management team has over two decades of experience in DRDO and ISRO. By partnering with government agencies in many prestigious programmes, it has proved its technical capabilities. During any order bidding, technical competence weighs more than cost competitiveness, which gives Astra an edge over competitors.

Increasing defence capex and focus on indigenous manufacturing to drive growth India’s expenditure on defence equipment has increased at a CAGR of 12% over the past 10 years. In the Union Budget for FY13, the military spending has been increased by 17% to ~US$40 bn. Further, in order to improve self-dependency, the government has introduced an offset clause, which has created another opening for Indian players. Astra has already started benefitting from this; it recently bagged an order worth Rs 3,100 mn. Although competition is high, the companyâs strong record will ensure a steady flow of orders.

This company looks very interesting due to following reasons

1)Execution capability as the order size is multiplying.?

Order visiblity is now around 5 X revenue, which should be good for about 3- 4 years and management is hopeful for more orders inflow.And it is still is available around 8 PE. Anyone still following this?

Few Negatives apart from above:

One of the things worth highlight is there has been continuous insider buying in this for last one year.

one of its Director Atim Kabra has build up 3.33% stake in the company.

I am looking for their recent AR, it doesn’t seem to be uploaded on company website or BSE, does anyone have it?

Disc. no position at the moment.

Booked profit long time back . Not every Maruti 800 can become Mercedes

oops Okay :-)… may be this one is not mercedes but looks like short term oppo. will check further on it…

Hello, anyone still tracking astra micro? i have a quick question -while looking athttp://www.screener.in/company/?q=532493, it says 'Contingent liabilities of Rs.269.49 Cr’but when i looked at annual report i couldnt find more information regarding any court litigations or any other provisions - could any help me understand what this means?.

Hello, anyone still tracking astra micro? i have a quick question liabilities of Rs.269.49 when i looked at annual report i couldnt find more information regarding any court litigations or any other provisions - could any help me understand what this means?.

This stock turned up on a screener of mine for stocks that have 10 years of steady accounting numbers and revenue growth.

I have noticed that scrips (at least since 2008) need around 250 crores of sales before they show steady volumes and this stock crossed 250 crores of annual sales in 2014.

While I’m not invested in the stock, it is on my radar for future purchase and I’m interested to know if members may have more information on the stock that they’d like to share.

The only drawback that I can think of is the scrip relies on government expenditure rather than business or consumer expenditure.

The Export order is expected to be completed in H1FY2015-16.The status of Rs 120 crore ELDA order will be known by end of first quarter or second quarter.Of the FY15 sales of Rs 634 crore exports were Rs 382 and balance are domestic sales. Similarly for Q4FY15 the export sales is Rs 45 crore and balance Rs 63 crore are from domestic market.

Hi. Defense Sector has really caught my attention. Although the concept of offset is not new, the new government is really making changes on the ground to attract a lot of giants in this space which shows the confidence of the entrants(reliance,l&t,tata etc.)…a lot of JVs are being formed with foreign players and the indigenous manufacturing and procurement is expected to increase from 30% currently to 70% in the next 5 years…The defense budges of which 40% is spent on capital expenditure has been increased 5 fold…instead of focusing on the OEMs who are mere integrators(which is attracting a lot of capital and it may eventually lead to price wars) , I am trying to look at SMEs which support and provide products as per the demands of the OEMs. Astra for me fits in there as its technology meets the demands of all the customers irrespective of the OEM bidding for the project

Since I do not know much about the sector , I would request if anyone can help me understand the value chain of this sector…I believe there are not many players doing what Astra is into and hence its important to understand where exactly they fit in and what is the size of their niche.

L&T has sold its stake of Astra Microwave. Most of it has been bought by Azim Premji

It has introduced a category for acquisition — Indigenously Designed Developed and Manufactured (IDDM). While indigenously designed, developed and manufactured equipment must have at least 40 per cent local components, if the design is not Indian, 60 per cent of the components must be locally sourced. What I am trying to figure out is its advantage on Astra Microwave in particular. The company has strong relationships with DSPUs . However with private players coming in , it may lose its advantage as these companies may start sourcing and manufacturing sub systems in house. Tata and L&T have already entered the core manufacturing space and RF and Microwave subsystems too…Why would they acquire technology from Astra? Also L&T now has no incentive to since it exited its stake from Astra…
Agreed that Astra has been in the space for really long and has good R&D capabilities…But how difficult is it for the big players to hire people from Astra and catch up on the technology? R&D is not an entry barrier IMHO

Listened to Q2 FY16 con call, some notes I scribbled. 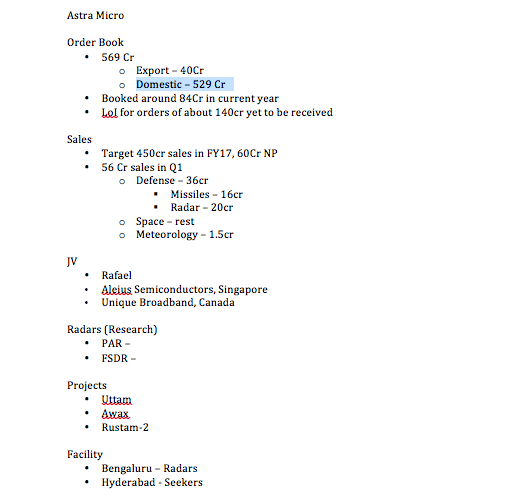 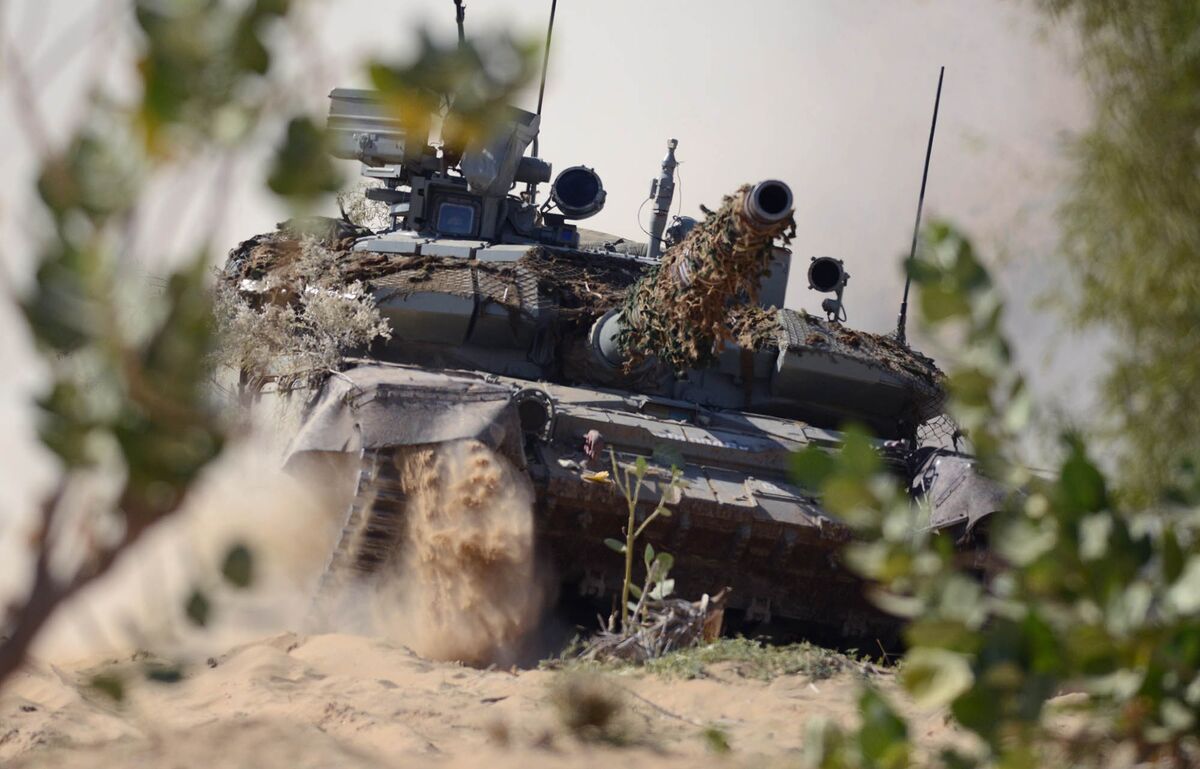 A fizzling boom in the shares of India’s Zen Technologies Ltd., a designer of military simulators, shows how expectations of a rapid improvement in the nation’s armed forces are ebbing.

What is the present opinion on Astra considering that Tata, Reliance have also entered into the sector? This financial year their revenues decreased from the previous year.

They work closely with, & hence have longstanding relationships with DRDO, BEL & other Defence PSUs, which is a significant advantage. Top priority given to ‘Buy (Indian - IDDM)’ in DPP 2016 is another advantage.

They also supply subsystems to ISRO although it’s a small part of their total revenue. ISRO’s funding is likely to go up significantly if the overall economy does well in the coming years, & that might help AstraM to get more orders from ISRO. I don’t know whether the ever improving business prospects of Antrix can result in any order flow.

The JV with Rafael gives them the SDR (Software Defined Radio) Know-how. The JV with Unique Broadband Systems is focused on product lines for Broadcasting & Medical Imaging (Coils and RF Amplifiers). It might help them reduce the dependence on the Defence Sector.

In my opinion, the management is capable and honest. I see no problems with their capital allocation so far.

The stock seems fairly valued in 100-120 range. Increased order flow, & improved execution (depends on approvals from the Clients after field tests) will be the key. I don’t see any problems in the balance sheet. It’s not a stock which can be looked at from quarter to quarter.

I don’t think Tata, Reliance, L&T are direct competitors to AstraMicro. The competitive threat is more likely to come from FDI limit in defence which has been increased to 49%. AstraM is trying to stay ahead with consistent R&D spending & the attempt to transition to a Systems supplier from a Sub-systems supplier. Let’s see how that pans out.

P.S. For a quick understanding of the company, go through HDFC’s initiating coverage report from July and Q1FY17 Concall. I mentioned March and July just to say that I had already invested before the report came out.