Been studying this company Associated Stone Industries. They own the largest quarries in the world spread across 10 sq kms in Rajasthan producing ~15 million sq m of Kotah stone every year. The company is promoted and run by Chairman & MD, Deepak Jatia (of the Jatia family (not certain of exact relations) – Hardcastle Restaurants, Pudumjee Paper Mills Pune, etc. Also, slightly irrelevant to the topic, but last year sold their home in Malabar Hill in Mumbai to Kumar Managalam Birla for Rs. 425 crore)

They acquired, through their Mauritius-based subsidiary ASI Global Ltd (ASIGL), Al Rawasi Rocks and Aggregates LLC, Fujairah UAE, for $5.9 million. The company further invested around $11.89 million towards quarry development, plant & machinery & working capital margin. Al Rawasi Rocks and Aggregates is engaged in quarrying and mining. It offers extract rocks, marble, minerals and crushed limestone, etc having applications traversing a multitude of industries, including steel, chemical and construction plants. As per the annual report, they are looking to tap the opportunity of huge volume of industrial, infrastructure, reclamation and other construction work currently underway in the Arabian Gulf region. The estimated reserve of quarry of this Company is around 200 million tones which is sufficient for about 45 years of its operations. Also, according to some articles I researched, the UAE is the main source of limestone in India as almost all the steel plants on the west coast have reported import of limestone from either UAE or Oman because it is logistically cheaper for them to ship it from here rather than truck it from other places in India. It makes a $7-8 difference a tonne to just get it imported than trucking. Commercial production started only in June 2015 (Profitability was hence impacted in FY16 as utilisation was low).

The company seems to have navigated well through the tough times faced by the mining industry – kept tight operational cost controls, retained customers by offering better payment terms to them, low leverage etc. The opportunities for the company seem huge with construction, infra related activities expected to pick up, with increased government focus. This may lead to increased revenue and profitability with increased utilisation of capacity in UAE.

The key concerns revolve around a slowdown in slowdown in growth of construction and infra activities. Further, environmental issues are another key issue which could affect the business. The company is also involved in certain trading of steel & other products which is a low margin business.

Would welcome any further inputs/suggestions that would help gain a better perspective about the prospects of the company.

I would also strongly recommend to read note of starting thread on valuepickr.

Discl: I have no investment in the company.

Thanks a lot for your valid questions.

In any case, I found the company interesting and given the limited information available on it, thought would solicit further insights into the business.

As advised, I will definitely go through the starting thread once again. Would request the moderator to move the thread from this section, if not deemed to be in the right place.

Hello everyone. This thread has been inactive for 5 years now so thought will update a note which I made a few weeks back on the company. There are an interesting set of events happening which can bring in growth in the company and the possibility of re-rating because of a new segment with higher profitability- Quartz. Any feedback would be helpful.

Co. acquired Rawasi Rocks & Aggregates(RRA) via its wholly owned subsidiary ASIGL, Mauritius which produces hard limestone rock products, which it supplies to various companies in the infrastructure, steel, cement, and real estate sectors in Dubai and in India.

 As per the management, ASI is one of the largest producers of Limestone in the country with a market share of ~46%. The Group is known to possess some of the largest quarries of Limestone in India and UAE. The Company has overall mineable stone reserves of about 25 million tonne at its Ramganjmandi unit and over 200 million tonnes under its UAE subsidiary, sufficient for operations for 45 years. 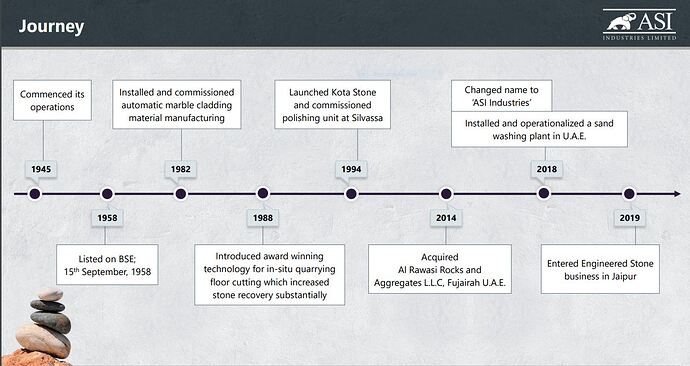 Investment Thesis
1. Upcoming Capex
 The group is Venturing into engineered stone business by setting up a plant for engineered stone with an installed capacity of 600,000 square metre per annum, entailing capex of about Rs 200 crore. The capex is likely to be funded through term loan of Rs 130-135 crore and the remaining through internal cash accrual.
 This project is being implemented at Mahindra World City, Jaipur, Rajasthan on approximately 7 acres of land.
 This Capex started reflecting into BS under CWIP in FY20 amounting to Rs.193 Crores which later increased to Rs.206 Crores in H1FY21.
 Co. is marketing its engineered stone under the Artizia brand and they commenced commercial operations on 23/03/21.
 During first year of operations, co. expects to achieve 170 Cr of incremental top-line and 18 Cr of incremental PAT.

2. Improving Financial quality:
 Proportion of core stone mining business is increasing and as a strategic decision, steel trading business will not be scaled up in future which has negligible profitability.
 Al Rawasi (foreign subsidiary) is constantly delivering good numbers after efficiently ramping up the operations. 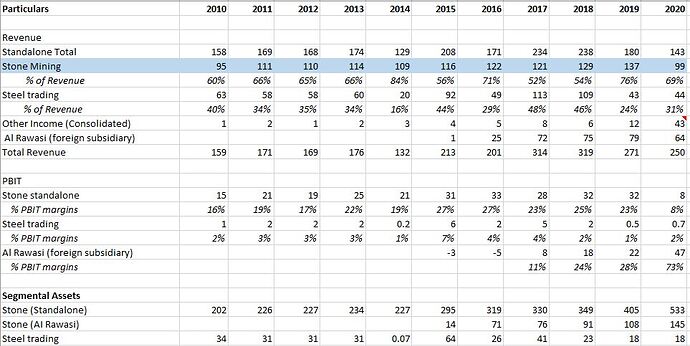 3. Attractive Valuations:
 Currently stock is available at 11x PE. However, current numbers do not reflect quartz segment, but balance sheet is already levered for the quartz capex.
 If the firm can ramp-up the operations without any delay, stock is available at attractive future valuation multiple. Also, profitability of quartz division is much higher which will lead to improvement in blended margins. 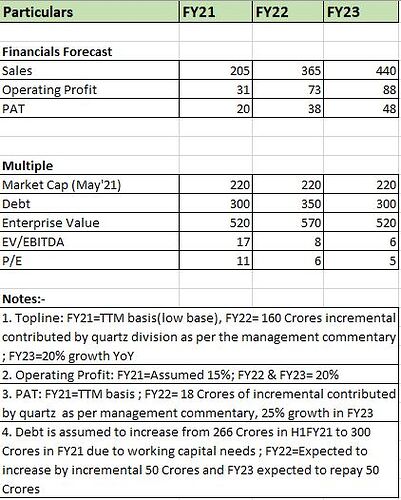 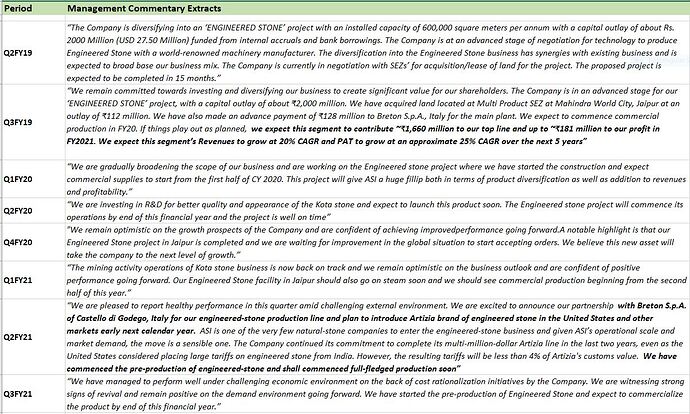 5. Dip in topline for FY19 & FY20 were one-off events:
 FY19 Revenue dipped to Rs.180 Cr from Rs.240 Cr largely due to reduction of trading activities which reduced from Rs.109 Cr to Rs.43 Cr during the period. Rather, stone mining division grew from Rs.129 Cr to Rs.137 Cr
 FY20 Revenues got impacted because co. had to shut down the stone mining division following the direction received from the Department of Mining and Geology, Ramganjmandi, Kota, Rajasthan, alleging irregularities in environmental rules from 28/11/19 to 29/04/20. Co. received CTO for next 5 years

Concerns specific to ASI Industries:
1. Novice in quartz manufacturing industry:
 Co. has no experience of manufacturing and marketing quartz slabs. It might take time to ramp up operations in case of inability to market the products or delay in ramping up quartz plant.

2. Leverage:
 Companies existing debt is Rs. 265 Crores. They have funded the capex with 130 Crores of term loan. Excluding FY20, company is generating only Rs.35 Crores CFO from existing operations and has no major capital outlay now that the capex has been completed.

Hi @aashav23, do you have any information regarding what led to the other income of 43 cr (which is fairly substantial compared to their operating profit) in FY20?

Out of 43 Cr of other income, 38 Cr of other income is pertaining to their subsidiary- Al Rawasi. This was the first time such an abrupt spike came in the subsidiary’s other income. Under the notes to financials, it’s classified as commission income. Will need to interact with management to know more about it.

Very strange move from the company - proposed selling the Quartz plant in slump sale @85 Crores whereas total CFI towards the plant was over Rs.206 Crores.

The promoters were predicting to make about 18cr of profit from engineered stone division in the first year of operation.

And now suddenly they make a u turn and sell the whole plant at 4.5 times their predicted earnings for first year. Makes one wonder whether the market for engineered stone suddenly worsened or whether the promoters are somehow related to this buyer.