In the latest call there were pointed questions on this again and his response was that he is on board of Shalimar but not does not hold any executive capacity. Also no plans of moving out of APL Apollo role anytime soon (within the next 2 years or so)

The only way we can get more clarity is to figure out how much time he is actually spending time with Shalimar Paints, if he is getting involved in ops it will clearly mean there is no smoke without fire

Check out the Shalimar Paint con calls on Research Bytes. He clearly says that he works 2 days a week for Shalimar and is in charge of strategy and making sure they operate at international benchmarks. He took almost all the questions in the call while the CEO was mostly silent. He has also given media interviews on Shalimar.

I think he is more of an adviser at APL, Sanjay Gupta calls the shots. His departure if at all it happens may just cause a short term blip.

What I didn’t like was his blatant lie that he is in a non executive role at Shalimar.

tricoat is a patented technology of atkore international- a U.S. based company.so not anyone can do it. secondly, if APL installs one line of tricoat , atkore can not supply tech to any other indian company for 5 years. so for next 10 years atleast, no one else in india is going to produce it.
also Rs. 6000/tonne EBITDA (Q1) is far more than any other steel pipe company.No one is even remotely close.

Can you please quote the source of this information. Thanks in advance

Interesting piece FROM CO. PRESENTATION -
Usage in electrical conduit: TriCoat tubes are being used for electrical conduiting
purpose in developed countries. In certain countries like USA , Canada and Australia it is
mandatory to use steel tubes for a exposed conduiting in all high rise buildings. So Apollo
TriCoat believes there is a huge market and scope for developing this segment in India as well.

Is is not Apollo Tricoat separately listed ?
What would be the impact on APL Apollo and if we like to bet on tricoat, is it not better to invest in that company? The thread for that company is below.

Apollo Tricoat Limited (ATL) journey: It was initially incorporated as “Potential investment and finance ltd” in 1983 and acquired by Mr Saket Agarwal by open offer in 2016. Subsequently name was changed to Best steel logistics with major areas of business as warehousing,logistics and trading activity of steel. In 2018 Mr Rahul Gupta(RG) son of Mr Manoj Gupta(Chairman of APL Apollo tubes) has acquired controlling stake and changed company name to Apollo tricoat ltd and started setting up plant…

Would appreciate views ? I think Apollo Tricoat trades at steep valuation at this moment as per screener.

Video showing the vision and hunger of the management to stay on the top and be a dominant player in the segment. Although I would advise to take the content of this video with pinch of a salt since I learned this gentleman have also done pvt corporate seminars for Apollo Tubes. So possibly some connect to either the company or promoter.

Recently APL Apollo bought a distress plant from a subsidiary of Shankara Buildcon for some 70 Cr.

At the end of the above note this information regarding capital infusion was given.

This shows the confidence of the promoter with his business. That is indeed very good. If one tries and asses closely this infusion was done for the plant acquisition of shankara buildcon.

In the same press release it was mentioned that shankara was operating the plant at 40% and APL under its umbrella can operate the same at much better levels. Another important point is shankara has done a contract with APL that it will buy 2.5 lac ton material in Fy2020 which APL says will assist their volumes and the said contract is an exclusive one.

This show the strength of the business with increasing and improving Cash Flows.

How it benefits Shankara

Shankara is the second largest player in southern region (again as per the press release) which was not able to efficiently use the plant (40% utilization levels) / Suddenly that same acquired plant has ramped up to efficient usage in just 1-2 quaters going forward.

The max growth in volumes and realizations the company is getting in GP (Galvanized segment) the in efficient plant acquired from shankara.

All looks like too good to be true. And when promoter shows confidence in business by infusion capital via pref allotment and warrants during the same time promoter is also selling their stock in open market sale (as per bse disclosures)

The confidence fading away in a time of few quarters.

Few points on steel pipe industry from CRISIL; though the report is few months old but I found it to be very interesting

• Demand for steel pipes likely to grow 7-8% in next five years compared to 4.5% in last five years. Growth would be higher for ERW at 8-10% as against 5-6% for S&S (Submerged Arc Welded and Seamless)
• Water supply, sanitation, irrigation and increased usage of structural pipes in infra to drive demand for ERW pipes
• For S&S, the main growth drivers is oil & gas
• CGD orders will require at least 10,000-15,000 KM per annum of pipes through fiscal 2029, entailing an opportunity of over Rs 5000 crore per annum over 10 years
• Generally, steel pipe makers work on conversion margin, which insulates them from price risk to a great extent
• Most of the pipe maker have completed capital expenditure programme in FY19 and have enough headroom for capacity utilization
• ERW pipe capacity utilization for FY18 was 59% and in FY19 was around 63%; next round of capex will start only when the existing capacity utilization will reach 80-90%
• S&S capacity utilization in FY19 was 46% and likely to increased to 50% in FY20
• For ERW pipe maker, sharp movement in hot rolled (HR) coil prices is key factor to monitor
• Steel pipe contributes around 8% of India’s steel consumption
• Steel pipe industry size Rs 50,000 crore, split equally between ERW and S&S (in value terms). In volume terms market split is 70:30 (ERW:S&S)
• Operating performance of S&S players was impacted in FY16-17 due intense competition of Chinese players; but performance improved in recent times due to implementation of anti-dumping duty
• Square ERW pipes (door and window frame) pipes, which are widely used for construction, are expected to be the fastest growing segment in steel pipe
• In ERW pipe segment share of unorganized player is expected to reduce to 40-45% by FY22 from 50-55% currently
• Ductile iron pipes is a major substitute for SAW pipes
• Margin for ERW players got impacted by around 150 bps due to inventory loss
• Govt. in December 2016 has extended the provisional anti dumping duty on seamless pipes (355 mm and lower diameter) from China by five years

In the last 10 years APL Apollo has outperformed its closest peers significantly. Revenue for APL Apollo grew at a CAGR of 29.8% (through organic and inorganic route) while Surya Roshni posted a revenue CAGR of 13.7%. EBIT margin is also superior to its competitors; 90 bps higher in FY19, which is significant in such a low margin business. Hopefully it will improve further with their recently launched valued added product (DFT and Tricoat).
I have outlined the above in the following graph

along with DFT and tricoat, I believe acquisition of shankara would also add to margins.They were APL’s biggest competitor in south. This will give pricing power. Additionally they have got 2,50,000 tonnes of committed volumes from shankara.

Change in shareholding structure of Apollo Tricoat: I have observed one very interesting point that “INTEGRATED MASTER SECURITIES (P) LTD.” which acted as “Buying Broker” for “SHRI LAKSHMI METAL UDYOG LIMITED” (100% subsidiary of APL Apollo Tube) to acquire Apollo Tricoat during open offer in 2019 also acted as “Buying Broker” for Saket Agarwal (promoter group with 12.69% stake) to acquire the company in 2016. Saket Agarwal’s stake in the company has been reduced to 12.69% as of 30-September-2019 from 39.04% in June 2017. I have just one query regarding the acquisition of Apollo Tricoat; why APL Apollo Tubes acquired Apollo Tricoat via Rahul Gupta (son of Mr. Sanjay Gupta, Chairman of APL Apollo Tubes) instead of acquiring directly.

I have attached the shareholding pattern of Apollo Tricoat.

Company is guiding for better capacity utilization and better profits from Q3.

@zygo23554 any comments would be helpful.

The results are bad compared to last year. PBT has declined from 41 cr to 26 cr. That’s a huge drop. This is largely due to increase in other expenses from 79 cr to 106cr. These are consolidated numbers. Standalone results have loss before tax.

4% increase in market share is a huge positive in my view.

For apl apollo inventory loss has been the biggest contributor to reduced pbt. Steel prices have corrected during the quarter. Going forward this scenario shoukd improve. 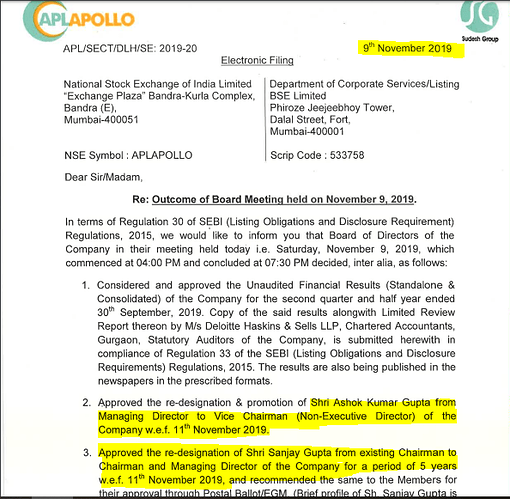 This was known. One could gauge from Ashok Gupta’s investment in Shalimar paints and the amount of time he was spending there.