As per #24. “LTCL can be set-off against any other long-term capital gains.” Does it mean investor can set-off LTCL of debt funds against LTCG of equity funds and vice versa? Sounds unlikely but your view can be helpful.

*MUST READ FOR ALL *

This paper clears all doubts & provide full clarity on tax treatment of
LTCG, including on *bonus shares *& also about how the *LTC Loss *will be
treated wef 1-4-18

Thanks a lot for sharing.

I had asked the same question twice and any of the articles posted here does not clarify that. However I checked with my CA and as per him ‘it can be used for set off’ …so far, it has been lying unused in my returns and now is the time to make use of it 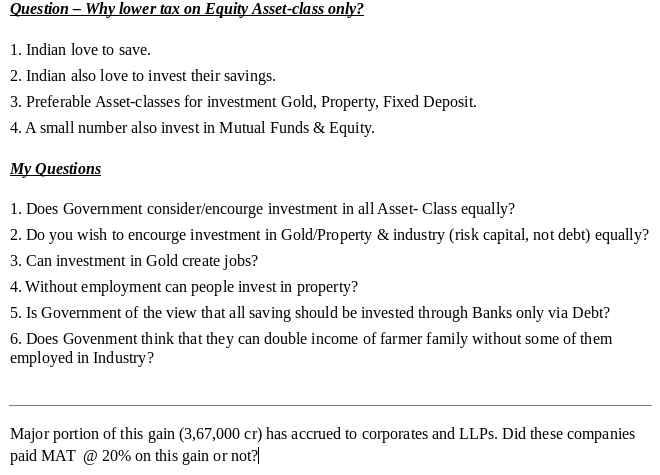 Found this section from Poor Charlie’s Almanac very relevant to the effect of taxes on returns.

"Another very simple effect I very seldom see discussed either by investment managers or anybody else is the effect of taxes. If you’re going to buy something that compounds for thirty years at fifteen percent per annum and you pay one thirty-five percent tax at the very end, the way that works out is that after taxes, you keep 13.3 percent per annum.

In contrast, if you bought the same investment but had to pay taxes every year of thirty-five percent out of the fifteen percent that you earned, then your return would be fifteen percent minus thirty-five percent of fifteen percent-or only 9.75 percent per year compounded. So the difference there is over 3.5 percent. And what 3.5 percent does to the numbers over long holding periods like thirty years is truly eye-opening. If you sit on your ass for long, long stretches in great companies, you can get a huge edge from nothing but the way income taxes work.

Even with a ten percent per annum investment, paying a thirty-five percent tax at the end gives you 8.3 percent after taxes as an annual compounded result after thirty years. In contrast, if you pay the thirty-five percent each year instead of at the end, your annual result goes down to 6.5 percent. So you add nearly two percent of after-tax return per annum if you only achieve an average return by historical standards from common stock investments in companies with low dividend payout ratios.

But in terms of business mistakes that I’ve seen over a long lifetime, I would say
that trying to minimise taxes too much is one of the great standard causes of really dumb mistakes. I see terrible mistakes from people being overly motivated by tax considerations.

Warren and I personally don’t drill oil wells. We pay our taxes. And we’ve done
pretty well, so far."

Munger considers paying 35% tax without indexation on long-term returns to be not so bad. Over very long periods, paying that 10% LTCG will not have a significant impact on CAGR returns.

To add further to this, I performed a CAGR calculation of Rs.12,000 invested in Reliance Industries in 1982 turning to Rs.25,00,000 in 2017 which is a realistic scenario from Indian markets from a very-long term perspective of 35 years.

See these screenshots to see what I mean. 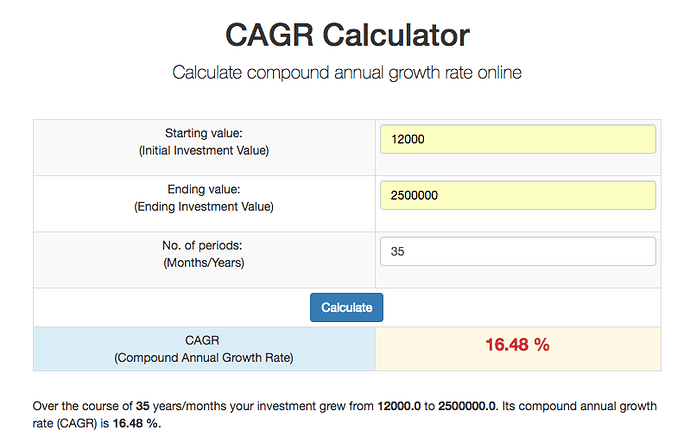 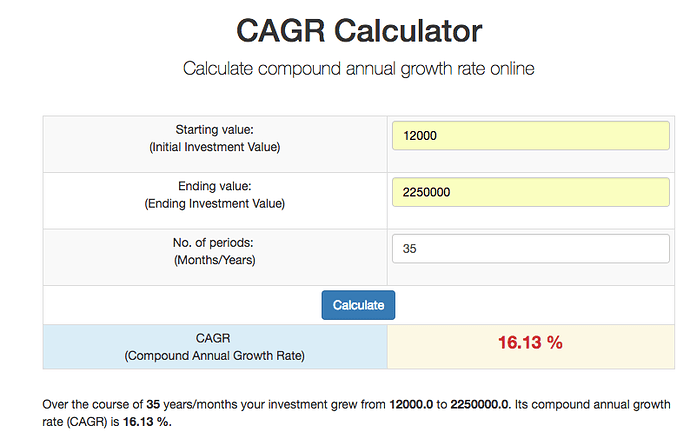 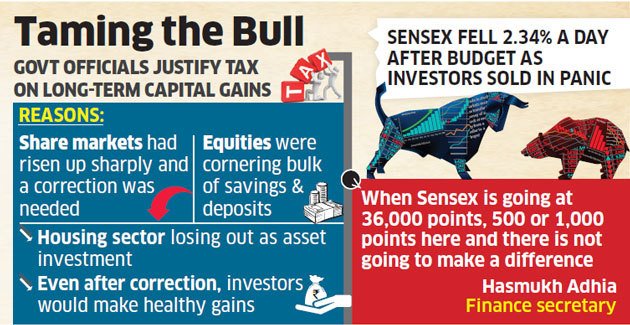 The Finance Minister, Arun Jaitley in his Budget announced a 10 percent Long Term Capital Gains Tax (LTCG) on stocks and equity-oriented mutual funds if the amount of gains exceeded Rs 1 lakh.
Following the announcement, the Central Board of Direct Taxes (CBDT) has explained how the tax would work in different scenarios. The board has given four different scenarios to explain the impact of the tax on shares purchased before January 31, 2018.

as per the latest clarification from cbdt, Long-Term Capital Loss From Share Sale Can Be Set Off, Carried Forward---- read it here.

I am more worried about mindset:

Capital gains don’t accrue from any effort.
With 10% marginal rate, nobody will feel a significant pinch and go to Mauritius to invest in India: 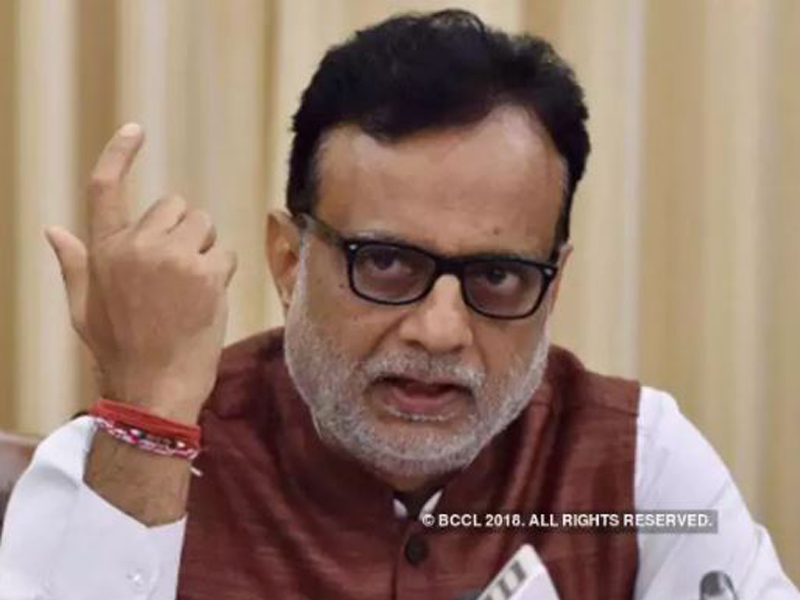 India Business News: Finance secretary Hasmukh Adhia has been leading the government's move to reform the tax administration and has played a key role in implementing GST.

If the entire world index has gone down by 3-4%, naturally it would have ripple effect on Indian stock market also. It is not LTCG tax effect, said Adhia.

Not worried by market crash, why encourage one asset alone: Adhia

“Gain in the last one month is much more than temporary adjustment.”

Indian politics is never short of stupid politicians to make foolish comments on situations of this sort. And these are the people who rule India. I wonder why he doesn’t invest all his money in equity as capital gains here don’t accrue from any effort at all. Why lose easy money? Unless he has a better alternative of even higher returns with no effort

He’s not a politician.

LTCG move has come at the worst time for government. In FY19 they might have to set off huge amount as LTCL. So, no gain, only loss for the government in the short term.

With 10% marginal rate, nobody will feel a significant pinch and go to Mauritius to invest in India:

What is the advantage of going to Mauritius to invest in India?

Sorry my bad. Thought he is a politician. But politicians also do these things and anyways he’s a representative of finance administration and he’s not supposed to talk non sense. Well now he says Government will see what it can do, looks like they changed their views.

Funny thing is when global rallies are behind our rise, we say because of domestic reasons and government’s execution, stock markets are at record highs. But when LTCG, bad budget causes losses, politicians/bureaucrats are quick to blame the global selloff.

There is only one way of looking at things Glass is half full and rest is my responsibility to fill. Be positive and life will treat you the same…be unhappy and you will get the same from others. Government job is to ensure spend in economy and creation of job. The growth will happen if we have sustainable growth drivers…ie create Infrastructure, housing for all, promote agriculture growth, promote manufacturing and exports. Their main intent is to create opportunity and fairness for all to have a decent way of living and not just to promote stock market. Stock market is a sub function of all the above listed factors and just because of tax and surcharge growth is not going to change. Stock value is again sub set of market sentiment and growth… if growth comes back the stock prices are going to be much higher in 2 to 3 years and you will be happy to pay taxes on your returns. Government is creating a level playing field and globally every market has STCG AND LTCG so if India also aligns and is able to maintain sustainable growth every one will be a winner.

As per my knowledge this route is closed:

I am not sure why he is talking about that route. For FII coming via this route there was no tax in India due to treaty, and there were ways to avoid or reduce capital gain tax in Mauritius as well. Indian money used to do this roundtrip to avoid taxes.

If we consider that January 31 shall be higher cap for the market till March 31 and it is less likely that stock prices shall exceed January 31 price till March 31. Still in this case why to sell before March 31 and instead better to sell after March 31 to book LTCL as per provisions and let it set off against LTCG.