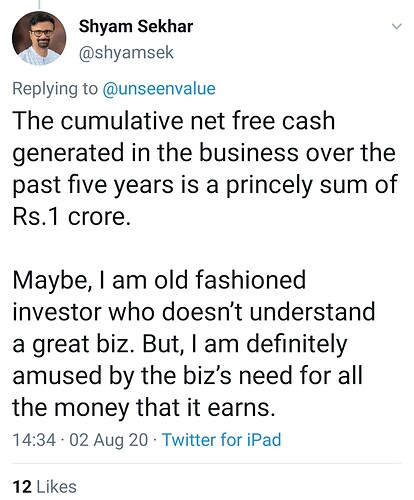 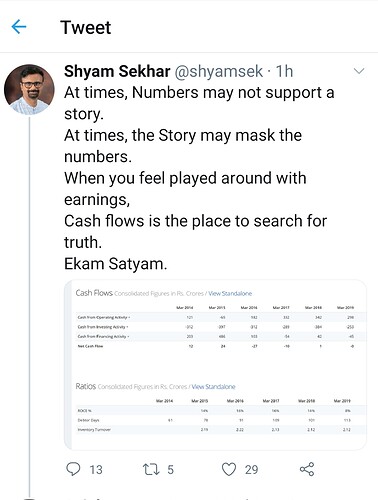 Journey of a good growth company

I cant understand his statement at first place.
Cash flow from operations is 1685 which is more than the net profit in that period.
Company has invested this amount in addition to that they borrowed 1000+ crores and raised 500+ crore equity and invested (2155 cr invested in last 6 years).
So, where is the question of positive free cash flow ?
He can claim whatever they claims to have invested doesnt exists. That question makes sense.

Satyam scam is one where cashflow from operations was shown as positive( although no cashflow in first place) and they hided it by showing as related companies loans ( similar to wirecard 2 billion in recent times).

2…company manipulates opex and show this expense as capex.

This will show good ocf but when we study fcf,it will be consistently negative. 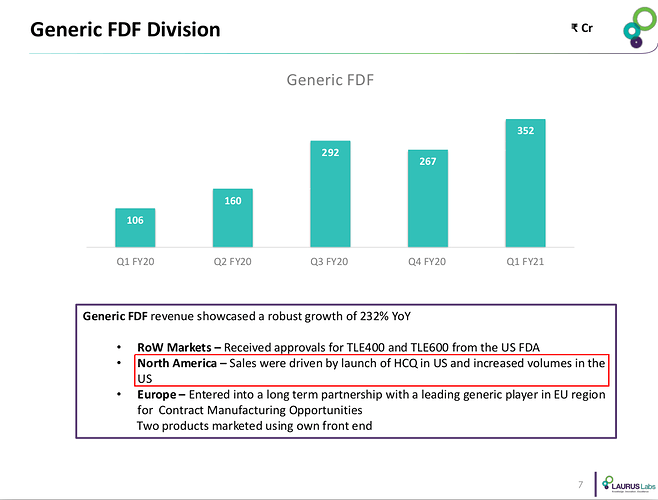 How much money can a company make by launching HCQ in US, 232% growth (yoy)?

Other API showed a growth of 207%, also company mentions Efavirenz, Tenofovir & Gemcitabine API and their FDF as their main products in their fy20 annual report. Efavirenz is a AIDS drug, Tenofovir is HepB drug & Gemcitabine is a cancer drug.

I generally have no idea, how many API’s a company can manufacture? What kind of capabilities are required to have API’s in so many different areas of medicine?

Highest increase in FII holding during The Quarter Ended June 2020

FIIs seem to have lapped up large holdings in Laurus Labs. Good long term investors seem to be getting into it. The results also seem to match the exuberance.

At 1Q21 conf call, Mr Chava said they see a HUGE opportunity in the CDMO segment. But how can they have FDF and CDMO both given CDMO customers might have IP issues with that. If that’s easy, why has Divi’s labs not entered high margin FDF segment?

Also, looks like CDMO division has very high margins. I did some back of the envelope calc. for Divis labs’s/Suven/Dishman segment-wise margins and found that CDMO segment margins are highest (CDMO - ~40-50% vs API 20-30%) while FDF margins could be ~5-10% higher vs APIs.

Laurus also incorporated a subsidiary Laurus Synthesis Private Limited to give an increased focus and then eventually assign a dedicated R&D and manufacturing site for its operations (maybe to comfort CDMO clients ).

But how can they have FDF and CDMO both given CDMO customers might have IP issues with that . If that’s easy, why has Divi’s labs not entered high margin FDF segment ?

FYI, Dr. Reddy also is into CDMO, and many others (including Biocon). So, IP issues are not a concern if the company is trustworthy.

So, that was solely Divi’s strategy to remain in no competition mode. Neuland also seems to have the same strategy.

No competition strategy is the best way to gain confidence of innovators. And being an early starter in this domain made Divi’s to adopt this strategy as then this outsourcing wave were not very much prevalent.

@sujay85 thanks for this explanation.
I am seeing mostly all pure play CDMO businesses (Syngene/Neuland/Divis) valued much higher on PE/EV-EBITDA basis vs. those in diversified API/CDMO/FDF.
Does that imply limited valuation re-rating opportunity for Laurus?

My rough analysis basis notes collected from concall. There could be misinterpretations , help me in correcting those. I have tried to quantify what could be expected in future if management delivers as promised. Notes are only for study purpose.
Disc: Invested

Please share a permalink instead or link to original article.

Does that imply limited valuation re-rating opportunity for Laurus?

Not sure. But you are seeing decent valuation for Laurus as it is growing much faster than the three names you mentioned and so PE gets reset after each quarterly results.

Does anybody know whether Laurus has the capabilities to manufacture Metformin Extended release tablets? If yes, are they already selling them? Google search says Laurus sells normal Metformin tablets.

Q1 net more than annual profit! This API maker is creating a splash on Dalal...

APIs are active pharma ingredients used to make drugs, while formulation is the process where APIs are used in specific ratios to produce a drug.

The link points to Drug Master Files (DMF). DMFs can be active or inactive. What is DMF? According to FDA, this is the answer.

I didn’t get any impression there is something like active drug.

I see a keyman risk also because after listening to dr Chhava, I think he is the key man and a lot depends upon him. 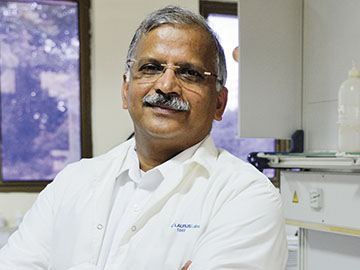 Although a chemist by profession, Satyanarayana Chava's astute business sense is reflected in the success of his Hyderabad-based pharmaceutical startup

Hello boarders, in the call, the management said that they have acquired stake in the South African company Aspen for 70,000 Rands (which comes to about 3 lac INR).
Can anyone confirm the nature of this deal? The amount seems too less (while acquiring a company).
As per reports last year, they have agreed to acquire 100 % stake in Phekolong pharma, a subsidiary of Aspen.
Does anyone find any flags with the value of acquisition?

The jump in pharma sector (API esp.) as a whole is a bit difficult to understand, Dr Chava below is saying it is not related to China factor at all, and that is not possible as per him in general.

So the other possibilities remain:

At least companies are not doing panic buys as per Laurus CFO!

So, the only possibility remains some (temporary) element of demand growth led by end users, else this is long term structural, helped in a bit by rupee depreciation.

The explanation for the API structural is (in part) China substitution which has been likely planned for in the capacities added by the Indian manufacturers.

Note - for pharma in general this is perhaps not the best place to discuss. Though there are remarks of a fresh batch of off-patent drugs expected, from views of an analyst I read somewhere, together with the maturing of Indian investments in developing markets, now paying off.

This is in complete contrast to what Divi’s said in the concall I quote from Divi’s thread. @valuequest

Q: Is increase in APIs a temporary or structural story
Increase in volumes of APIs has been across the portfolio largely due to following:
a) Chinese API supplies have gone down – we do not know whether it is because they could not manufacture or because there was lower demand for Chinese goods