Can you please tell me where the 225 cr Free cash flow (according to your calculation) was deployed?? To reduce debt, pay dividend, increase Cash/Investments??

According to your calculation, FCF is +132 cr in the past 8 years. If it made 132 cr FCF, why did KMCH borrowed 89 cr and where did all these money go?? Just think about it.

I am not much of an accountant, but this is how it should ideally look like. Do correct me if I’m wrong.

Either KMCH should improve its profitability or generate free cash flow that could be used to reduce its Debt.

KMCH has borrowed a lot in the past 1-2 years to build the Medical College. The profits are yet to come in completely. Once those profits start flowing, I am quite sure KMCH will be Cash Flow Positive again. That is pretty much what every investor in KMCH is looking forward to.

Hi Dinesh,
According to your calculation, FCF (Free cash flow to Firm) in the past 8 years (FY11-FY18) is arnd 181 cr. Whenever you finish calculating FCF calculation, check how the Co had deployed those FCF for the period that you calculated.

From FY11-FY18, KMCH had borrowed arnd 89 cr (including current-maturities of long term debt) - It came arnd 93 cr when I rechecked all the ARs. Co increased its Cash & Cash Equivalents by arnd 79 cr and paid 17 cr as dividend. So, where did the FCF of 181 cr go??

IMO cash from from debt cannot be added to free cash flow to equity. Money raised from debt is never free to distribute and carries some charge over the assets.

Also consider, if this was true, any company with high debt will report positive cash flow to equity, even Suzlon, JPAss etc types.

I personally calculate free cash as Cash from operations, less (net) amount invested in fixed assets. One can reduce interest payments from this, if he wants.

I won’t reduce dividends as they are free cash and actually distributed.

If this free cash is positive, the company shows sustainable growth as it can fund its capex from internal business sources. I do not reduce interest payments from here, but I do check interest service ratios and debt levels before investing. A check on gross debt is also important. It should not rise much.

IMO cash from from debt cannot be added to free cash flow to equity. Money raised from debt is never free to distribute and carries some charge over the assets.

True, from a legal point of view I guess. But when you take Debt, you pay interest and get the right to keep it for the time you pay the interest. So, it’s like that money is owned by the company. Also, companies do borrow to pay dividends once in a while, not that it is a good practice.

I won’t reduce dividends as they are free cash and actually distributed.

I have not reduced Dividends. I just showed it alongside FCFE and Cash.

I tried to calculate Capex indirectly, and I guess some numbers may have been over/understanted there (Took data from Screener). This time, I took the numbers of ‘Fixed Assets Purchased/Sold’ directly. I think this is a better representation.

But if you notice last year alone, Borrowings have increased by ~Rs. 80 Cr, a significant jump. But this additional capital hasn’t started producing any cash flows yet. That’s the point I was trying to make.

I do not reduce interest payments from here, but I do check interest service ratios and debt levels before investing.

Personally, I do not reduce interest payments. People may argue and want to reduce as it is a definitive outflow.

Debt that comes in, has to go out. If you see the cash flow over the years say 5-10 years, the debt will come it and get paid not affecting the cumulative cash flow which I think matters most. But adding it first and reducing it later impacts the assessment in short run.

Excellent results QoQ, but flattish YoY (I guess we already knew this).

It looks like the leverage is finally paying off. A few more quarters (Probably like a year) and we can figure out the Economics behind the Medical College.

for the quarterly results, it’s not right to see QnQ results as there are seasonal variations. The better way to see is YoY. Hence, largely flat results

Agree completely that these are rock solid results considering that the eco systems has been so full of head winds for the hospital sector.

YoY profits are not comparable due to a huge Dep charges last year due to the Ind-AS adjustment.

If you compare EBITA then they are almost the same around 21% give or take a few basis points.

It has declared the highest ever annual profits 60.14 crs!! Profits have almost tripled over the past 6 years without any increase in Paid up Capital showing good cash generation and deployment. I consider this as a very prudent and steady growth in the hospital sector.

Borrowings have doubled and interest cost continue to be capitalised sparing the P&L of pain.

Trade receivables are down 20% despite an increase in revenues, which is really good. No of days in receivables is amazingly low at less than a week!! One may argue that hospital business is largely a cash cow but then don’t forget that collection of revenues from Govt. schemes and corporate business can and have been difficult for many hospitals. I suppose TN has always had a very efficient Govt.healthcare system compared to other states.

All this is great but what about valutaion?? That’s what the minority shareholders are concerned about.
Kovai is languishing at sub par valutions despite performing excellently quarter after quarter. But like they say, without a jockey even the best horse is of no use!! Mera number kab aayega??

God knows what more they need to do to get re-rated, that too in a sector where lousy 3rd rate hospitals are quoting at sky high valuations without showing any performance year after year!!

for the quarterly results, it’s not right to see QnQ results as there are seasonal variations. The better way to see is YoY. Hence, largely flat results

We already knew that the first two Quarters were bad. I think it’s great news that the leverage (Both financial and operational) is finally paying off. The Medical College should start contributing more from next year too.

On a side note, KMCH should seriously stop this bad practice of capitalizing interest expenses.

Medanta is being bought by Manipal Hospitals at a whopping valuation of 24 times EBITA!! That too a for a hospital sinking under debt and making losses!!

At this valutaion Kovai should be just over Rs 3,000 per share. I am willing to accept even half :)))

This has been going on for some time now. PE investments in hospital sector increased by 155%.

“A couple of years” seems dire. But I suppose the college will start contributing something from next year.

Idhayam merger has gone through completely. We already knew this earlier.

ChrysCapital Investment Advisors India have invested a LOT in KMCH this year via Auburn Limited. Stake has more than doubled from 1.06% to 2.44% 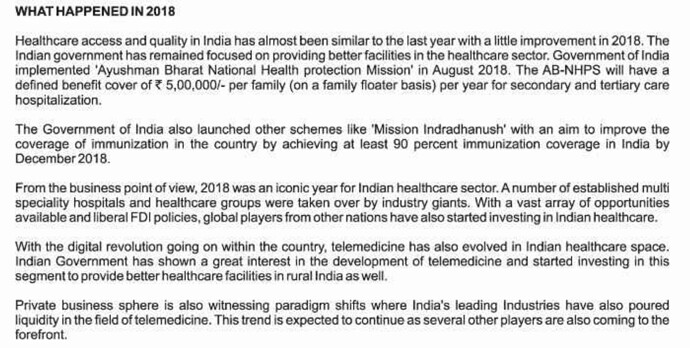 I had discussed some of these things in my own PF thread:

As I have claimed myself several times, I am more a numbers guy than a story guy. This is one of the primary reasons I joined VP too, in order to access more stories. So, whatever research I do about a company or reviews I hear, I try to match it with a corresponding set of numbers from the financial statements of the company (It’s not always such an easy, linear process… but I hope you get my drift). Only if the story and numbers are somewhat consistent, I consider an investment. Let me try to…

Some more visibility of the Medical College. 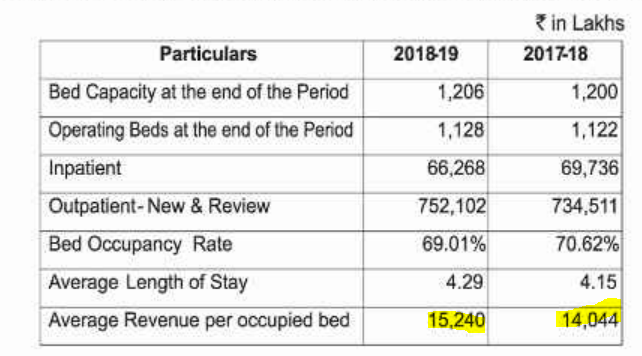 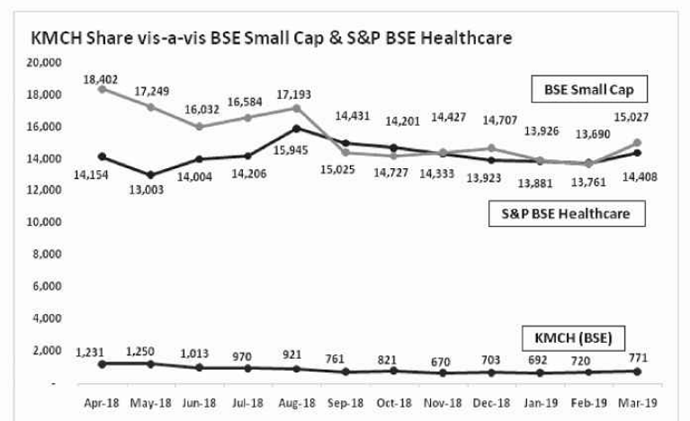 Somebody doesn’t know how to use an Excel in KMCH.

At a quick glance, you’d believe that the share was largely flat during the year.

Stark decrease in FCFE, thanks to the Medical College I suppose.

On limited Google research, it looks like the first patient to be treated on this technology in the US was in 2017. Also, the first patient ever to be treated with this technology was also in 2017. So considering this, I’d say KMCH adopting it shows a nimble attitude. Some other healthcare groups in Australia and Korea have also adopted it in 2018.

It was actually good to go through this year annual report - it is much more detailed and has lots of insights. Dinesh has already covered a lot of things…just adding a few more that might have been missed

I have always felt that this hospital has focussed on technology and tries to be the first to do some of the new things in the industry. Here is a good extract from annual report: 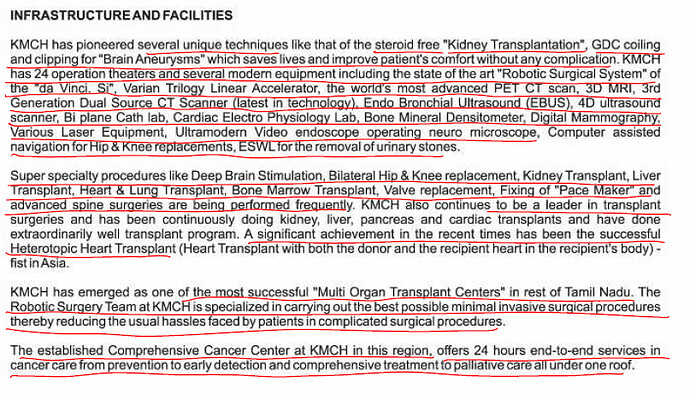 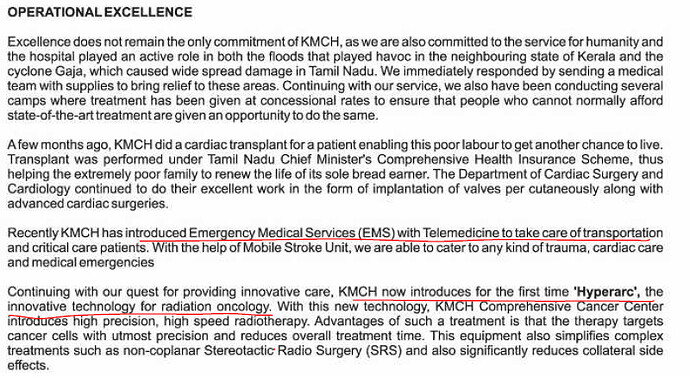 Education News: The National Medical Commission Bill, 2019 in its present form gives the proposed commission the power to fix fees for only 50% of seats in private in