Could not get a thread on Bharti Infratel, hence started it.

I. About Bharti Infratel (as mentioned in their website)

A leading provider of tower and related infrastructure. One of the largest tower infrastructure providers in India with more than 39000+ Towers, based on the number of towers that Bharti Infratel owns and operates and the number of towers owned or operated by Indus, that are represented by Bharti Infratel’s 42% equity interest in Indus.
They are also pioneers in the concept of environment friendly Towers or ‘GreenTowers’ and energy efficient methods for maintenance of these towers.

a) Tower Infra Solutions
b) Tower Operations Center : Managing Day to day operations of Towers.
c) Infratel Enterprise Suite : Online ERP platform, where the user can raise and manage their respective business requests on an end-to-end basis. The entire process of requesting a new cell site or a cabinet expansion can now be administered through this smooth, transparent and efficient mechanism.

Went through the complete annual report, some interesting insights which I would like to highlight.

Would like to have thoughts coming from fellow members.

I fail to understand why their Debt has increased, as visible on Screener as well. Highlighted in Blue.

As per the merger agreement, Vodafone-Idea and Providence have the option to receive shares or cash for 11.15% and 3.35% stakes in Indus respectively.

It was mentioned in their con-call that this debt was raised for cash payment to Vodafone-Idea and Providence.

Dependence is on Airtel & Vodafone, both of them are not in good financial shape. AGR dues would literally kill them.

I don’t think anyone have doubt on Airtel survival. But for Bharti Infra shareholders, real question is what’ll happen to Voda-Idea. If Voda-Idea gets favorable ruling from SC and they are able to bring equity by themselves or selling their stake to someone else, then Bharti Infra could turn out out to be a great compounding story.

If you’ll see the listed Tower companies around the world, they are among the best compounders of last 2 decades with good dividend yields.

Here’s my thoughts on Infratel. I have never analysed the telecom space prior to this so i could be (very likely am) completely off the mark. Would appreciate thoughts from people who know this sector well to throw some light on the correct way to think about this.

Infratel did EBITDA margins of 50% in FY20 and sell side expects ~ 53% margins over the next 3 years. Based on these expectations, net lev by FY23 end is expected to be just 0.1x , so essentially net debt free. Div yield is expected to be near 8.5% based on CMP. When REITs are yielding 6.5%, this is not bad at all given that tower cos are largely utility kind of businesses vs. commercial real estate which (all else equal) i feel have more uncertainty as regards their cash flow sustainability. On valuations, Infratel is trading near ~5.4x EV/EBITDA vs. long term avg of 8.5x, so a significant discount given the uncertainty on VIL and hence Indus Towers. The big assumption baked into the current sell side estimates is that VIL survives. If that happens, that makes Infratel a much much easier story to bet into. But my thinking is that if VIL does go under, their entire subscriber base has to shift to Jio and Airtel. Now, can Airtel and Jio’s existing tower infrastructure handle THIS level of large influx from incoming customers? Likely not poss. While they would certainly sweat their existing tower infra more, they would definitely need more tower infrastructure to accommodate the incoming customers. So while they could build out their own tower infra over time, in such a case of “buy vs. build”, it might make more sense to go for ‘buy’ as customer migration will be very swift. In such a case, the tower rentals that Infratel gets from VIL currently might quickly get replaced by Jio/Airtel via either these cos buying out the VIL related towers or or some such transaction. While Infratel could still end up with spare capacity / lower utilization and lesser bargaining power (2 customers vs. 3 currently), it doesn’t look like it will become a zero revenue thing as far as tower capacity used up by VIL is concerned right now. So the worst case isn’t likely to be an entire loss of revenue from the VIL related towers but rather a haircut on the same. How much is the haircut is debatable but my point here is that it isn’t likely to go to zero. It would create a lot of volatility and headline risk for Infratel in the short term but if we are to take lets say a 5-7-10 yr view, i think this is def worth exploring. If you see Tower cos in the US, they’ve created enormous value, (see tickers AMT, CCI and SBAC) , much more vs the Telecom companies themselves (VZ, T, etc.). Their regulatory environment as well as their interest rate environment is not comparable to ours but basically, if a tower co has a decent regulatory environment and a steady interest rate regime, can be a very good asset class that yields dividends as well as capital appreciation.

Disc : Not invested in Infratel or any of the companies mentioned above except Embassy REIT.

Tower companies take land or building areas on lease for longer duration and build a tower there. These towers could be for single tenant or multi tenant. These are the major fixed cost for tower companies.

Now if the tower is single tenant one, then it cannot host more than one tenant. And here RoCE might be like utility companies. So if the telecom companies have enough money (which they haven’t as of now) and can manage their towers efficiently, they might keep them as captive towers rather than giving good returns to tower companies. (Before Jio onslaught, both Vodafone n idea had captive towers which they later sold to others. And Jio also built its own towers and is in process of selling them to Brookfield to reduce its debt. Most Jio captive towers or maybe all of them are single tenant towers.)

Most of the Bharti infratel n Indus towers are multi tenant towers. In case Vodafone Idea shuts down, their returns will drop drastically as they have to bear the cost of more leased area and bigger towers. And being operational creditor, I don’t think they’ll get any relief in IBC.

I fail to understand why their Debt has increased, as visible on Screener as well. Highlighted in Blue.

(All data is at Standalone Bharti Infratel level)

Yes Indeed.
Wats more interesting is that the merger would save more than 550 Cr annually for the company & a turnover of Rs 25000 Cr. Which is like 2.2 % of Turnover.
However this cost saving may take OPM to inch towards 55% from current 51-52% (as per screener).

Just a thought, isn’t it better to invest in Infratel than the Airtel.

Disc : Not invested in Bharti Infratel.

UPDATE ON THE MERGER OF BHARTI INFRATEL AND INDUS TOWERS

Infratel is very much dependent on Voda-Idea survival. So, if we want to bet on Infratel, we have to be sure that Voda-Idea will survive.

In some article, i have read that voda-idea accounts for roughly 1/3rd of merged entity tenancy. So, if possible we may calculate and guess worst case valuation for Infratel and then take the decision to buy or not.

Airtel is in a win-win situation. Tariffs are going to be higher in either case. If voda-idea shuts down, jio n airtel can raise tariffs very quickly. Voda-idea can’t survive on current tariff rates. If it has to survive, tariffs will have to move much higher.

Disc: invested in both Infratel & Airtel

I have been hearing about the story about tenancy drop linked to Idea-Voda survival. In case Idea-Voda doesn’t survive, dont you think what is lost will be made up from the other two large players? (pardon me if i’m completely wrong with my understanding on this one).

You’re making a valid point AJ. What happens to the Subscribers if Vodafone falls, who will give service?
Whoever gives service will pay Tower Dues. Existing Reveiveables will suffer which could lead to a short term shock for Infratel.

My base case assumption is that voda-idea will survive. And, in worst case scenario govt may take over it temporarily to run day-to-day services because of its importance to the nation and the inconvenience it can cause to large no. of citizens.

But in the scenario of its shutting down and govt not taking over, Airtel n Jio will benefit. These companies might not need those many tenancies as vacated by voda-idea. First they’ll increase capacities on their existing towers rather than taking over voda-idea tenancies. Also, Jio will prefer to use its existing towers to enhance capacity and only in case it needs new tenancy, it’ll look to other tower companies.

And voda-idea 2G population, only airtel n bsnl will be able to serve them. I don’t know if they’ll need large no. of new tenancies to serve this market, as the load on their existing 2G infrastructure might already be normal because of 4G migration.

Also if voda-idea shuts down, there will be large tenancy losses for most of the tower companies. It may lead to price war in tower companies. So, whatever new tenancies they may get, it won’t be very profitable.

Tomorrow voda-idea board meeting is there for fund-raising. I am waiting for outcome of this meeting. I feel for such a large and consolidated market, they should easily get the investors.

Doesn’t this merger make Infratel a monopoly in Phone Towers?

As promoters of the new company, Vodafone Group will hold 28.12% stake (in the merged entity) while the holding of Bharti Airtel Group will be about 36.7%.

Did anyone observe the unusual volume and price action in Bharthi Infratel today(2nd December 2020) ? Any insights into this? 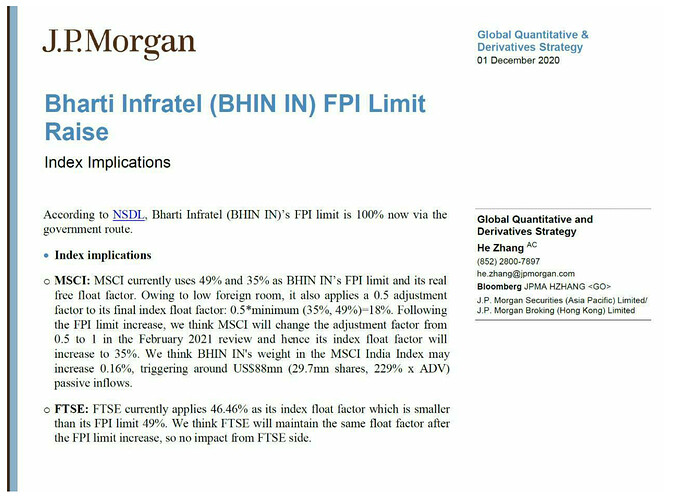