Thank you Vivek for bringing this into highlight. My opening post mentioned CASH as a footnote, but failed to bring this up later.

Absolutely. That’s exactly my reasoning too. Have been trying to implement this since the last 1 year when my eyes opened up on a proper capital allocation plan.

Proper Capital allocation means I must always have CASH. Minimum 20% even at the best of times I was told. So in uncertain times like this, I am 40% plus CASH. Trying to get to 50%!

I must have the ability to act on my convictions at .5x or lesser like you mentioned. The opportunity cost of remaining fully-invested is just too high. I have learnt that lesson in 2008. My homework and all the conviction was worth nothing!

I think one has to differentiate between potential collapse of markets and routine corrections which we see off and on. Having looked at the past few sharp corrections most of them are of the magnitude of around 2000-2500 points on the sensex and these might be construed as routine corrections.

**Anything more than that calls for a serious re think and a conscious move towards moving into cash. **

From the recent top of 18900 the current correction went down to around 16400 which roughly amounts to 2500 points. So unless we go much below 16400 we can consider this one to be a routine correction.

The point is you aren’t prepared ever for any corrections -routine or very severe.I know those following Technical Analysis might be prone to thinking a bit differently about this.But a simpler and much better way to handle this is to ALWAYS have CASH in your portfolio.

A new guy like me needs a framework to implement this. The simplest I have found is to decide I will never be fully invested. Even at the best of times I will be 20% CASH,. so I can atleast put 20% additional money should my best bets get cheaper due to any factors, market, sector or company specific.

I am also trying now to simultaneously work on a Long Term and Short Term Portfolio. 50:50. So by design, because of the quest for short term gains (6-9 months timeframe) there is always CASH available.

think one has to differentiate between potential collapse of markets and routine corrections which we see off and on. Having looked at the past few sharp corrections most of them are of the magnitude of around 2000-2500 points on the sensex and these might be construed as routine more than that calls for a serious re think and a conscious move towards moving into cash. **

the recent top of 18900 the current correction went down to around 16400 which roughly amounts to 2500 points. So unless we go much below 16400 we can consider this one to be a routine

I had been consciously moving more to CASH past few weeks and very selective slow buying. I am now 50% plus CASH. (from 40% levels in June-July)

Am recording this for posterity. I sincerely believe that CONVICTION without serious cash backing it up will be of no use. And I hope to make it count this time.

Have you changed your strategy since the previous update? Are you still substantially in cash?

Domestic markets seem to be set for another correction given that the US markets are trading significantly down today.

Yes I am still sitting on ~50% CASH levels. But have now started on looking to deploy some of that. I bought a little in the last 2 days.

Planning to update on current strategy in the Capital Allocation thread.

Just a question - if one always has 20% cash, then by design that cash will never be invested?! If you are not willing to invest at price x, despite high conviction and margin of safety and wait for quotational mark down to 0.5x, (not knowing whether it will come or not), at 0.5x, why wont you wait for 0.25x…and so on…

BTW, iam personallymoving towards being fully invested for the first time in 1.5 years…think markets are attractive enough…if they fallmore, i will be selling 5 PE stocks to purchase3 PE stocks.

Just a question - if one has 20% cash, then by design that cash will never be invested?! If you are not willing to invest at price x, despite high conviction and margin of safety and wait for quotational mark down to 0.5x, (not knowing whether it will come or not), at 0.5x, why wont you wait for 0.25x…and so on…

BTW, towards being fully invested for the first time in 1.5 years…think markets are attractive enough…if they i will be selling 5 PE stocks to PE stocks.

Say, your portfolio’s total value is 1 crore and you are sitting with 20 lacs cash in hand. Now, suppose the portfolio’s value comes down to 80 lacs owing to ‘market conditions’, you need 16 lacs in cash for your investment needs. So, the balance 4 lacs you can easily deply in the market. That ways, as long as markets are falling, you can continuously invest.

Now, I will come to your strategy…it sounds good, but empirically I have discovered that P/Es have little value in falling markets. In the last year and half, only 3 companies I have bought which are in the positive territory and of these three, two are decently high multiple companies( Apollo Hospitals and Indraprastha Gas…the third one, Balmer Lawrie is a low P/E company, and is barely in the black). From this, I have come to a conclusion, that in falling market, only those companies will do well who are extremely unlikely to report a YoY poor performance even under the worst of situations.

But yes, inspite of being vigilant, markets can still surprise you. So, a Standard Chartered takes a battering inspite of very little chance of faring poorly in the coming quarters. Such is the fierce power of fear.

However, I am not so sure if the time has arrived to move fully into cash. I guess, its still the time to move from riskier areas to non-riskier areas and this may mean equity to equity as well…like selling a high beta company for a low beta company…it can also mean moving from equities to alternate asset class like bonds, gold etc. (Personally though, I am more comfortable in moving from one stock to another)

Thanks Vivek, my strategy is a bit different.

One is I always keep 6 months of rolling expenses as cash, so that i don’t have to sell in panic. As and when my corpus will increase, i will make it 1 year cash. Once a month, i project my expenses for next 6 months, and keep cash accordingly. I don’t count this cash as part of investment portfolio, so am willing to be fully invested when i see opportunities.

Second, mark to market losses is something we all have - not out of choice though ! I have realized that if your analysis is right, and you have patience,you willmake money over a period of time. Mark to market losses bothers me wheni realize that i made a mistake in my analysis and hence have tobook an actualloss.

Coming to investing in bearish markets - if our companies are increasing earnings and have good dividend yield, sooner than later, it will reflect in market price. In 2009, my stocks which showed good earnings and had reached div yield of 5-6%, they rebounded very fast. Ofcourse markets may not rebound like 2009, but I expect that stocks with increasing EPS and good div yield will do good.

Also, i have a pretty concentrated portfolio - typically 7-8 stocks, so i tend to jump in aggressively once i find value and jump out when value disappears.

I love IGL and Apollo - was invested in IGL and now sold out due to valuation. Apollo i havebeentracking and never invested and missed due tovaluation concerns. Do you think this Aircel thing can have an impact on Apollo in any manner.

I just came across this thread which seems like it could be particularly apt in today’s market. Wanted to exchange ideas on stocks that hugely outperformed the index in 2009 and what were the themes/underlying fundamentals that caused them to do so?

From 2009-2013 the large cap outperformers such as HDFC Bank, Bajaj Auto, Tata Motors, Asian Paints, TCS, HCL Tech, ITC and multiple others gave a CAGR of over 30%. I think this market is providing similar opportunities.

While almost every valuation ratios are indicating that the Indian markets are overvalued and is expecting a correction in the values in the coming months.

Here is an counterintuitive point -

We are expecting the valuation ratios move towards historical averages (and hence a correction) from their current levels.

This concept is known as mean reversion in the statistics world and is widely used for many purposes.

But we need to note an important exception where this concept will not hold good and that is Structural change.

For e.g. a student on an average have achieved 72%-75% in academics but for his next exam he prepares very well (structural change) and scores 90%. While teachers/classmates were expecting him to achieve around 72%-75%.

Using the same logic in respect of Indian economy there has been a lot of structural changes that has taken place in the past 15-20 years.

P.S: This post is just to add some insights into the ongoing topic of markets being overvalued and big crash coming in. It is very hard to predict when and how the bearish phase in the economy/markets will set in.

observations say something else: 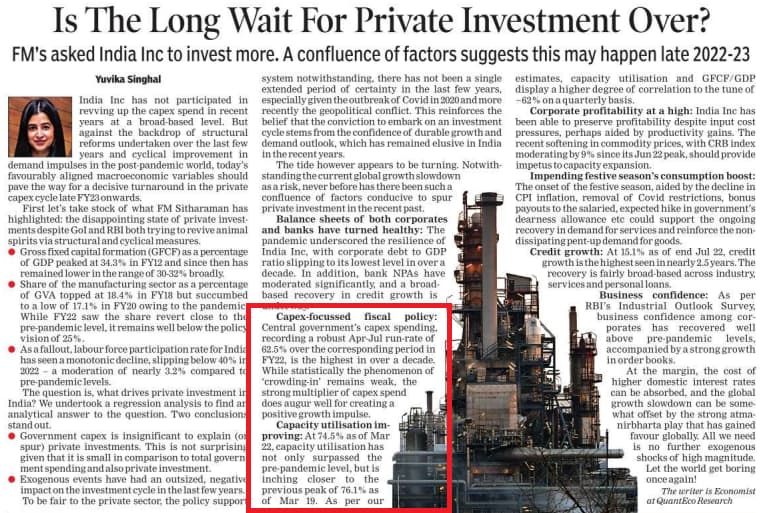 Not sure if this really fits in this thread but since its about doom and gloom, let me state it.

What are the odds for Adani backed companies to default on their debt?

As inferred from the below video, 21% of his debt was funded by PSU Banks at fixed interest rates. SBI has the biggest slice. 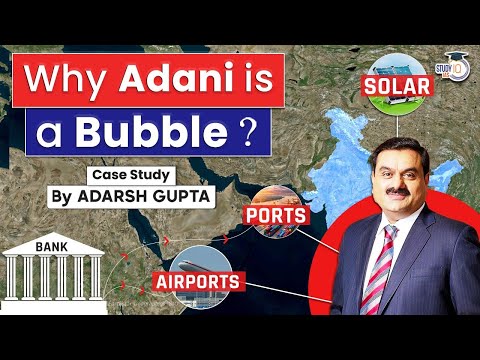 As Central Banks across the Globe are on a Rate hike spree, will Adani be able keep up with funding the motley of sectors they have stepped into?

As more and more people are turning bullish on the banking sector with improvement in asset quality across the board, one couldn’t help but wonder if there’s a Black Swan lurking.