It’s too early to say but in all fairness they have been running in hyper mode due to demand, I was expecting something like that or even a breakdown of plant

Does anyone know what exactly is the issue here and it’s impact on the long run?

I feel the plant is not full complied with prescribed EHS norms mandated by govt. Question is how much it time it will take for them to rectify the issues. Looks like this will have an impact only in short run.

I spoke to someone from the company, I was told its temporary, as seen on filings, promoters are buying and are short of roughly 80k shares to reach the maximum holding allowed to them.

Last time the plant was closed due to such order was in 2018, I have looked at the quarterly reports of 2018 and there was no adverse effect. I dont want to speculate if this time will be different but I am inclined to add if it falls substantially.

It is definitely a red flag when the USFDA compliant (?) company and exporting to 40 countries do such things that warrants an extreme strong action such as closure , even it is temporary. Company in its notification to BSE merely stated the facts with out even bothering about the course of action and timeline to make it PCB compliant. Instead they mentioned that they are using this time to do maintenance work. Will have to see the action taken by the company before any investment action taken.

Disc: sold some quantity today and intend to add after seeing positive action from the company.

The insider buying is strong they keep on adding even at 250 levels ,plus the growth story if you put 2 and 2 together it just tells me it is great opportunity, its a dream for stocks you watch get partial correction like these in temporary news worst case scenario current quarter results will be bad in the long haul you get the stock at a discount.

Can someone comment on their source of raw materials for the production ? I mean Is it import from China ( or other countries ) or sourced locally ? The annual report mentioned about 68% of India’s API is imported from China and their operations is also affected 10-15 % due to covid. There is no mentioned about source of raw materials…Just interested to understand the story of too much of reliance on China …

Looks like the plant closure issue is not a new story. There has been some protest against the company in 2018 as well. Although, it is in regional language, the message is clear that there is an ongoing protest against company on pollution issues. 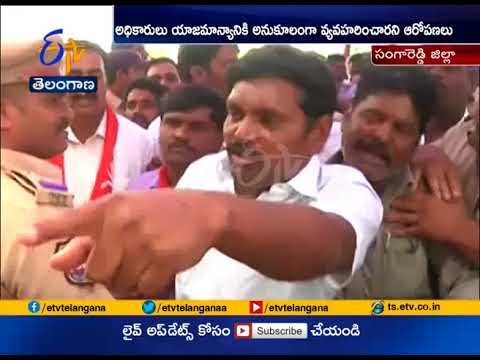 During Oct 2018, similar closure notice issued and the there were reports of allegations of ill health by the villagers due to pollution and expansion plans were abandoned due to stiff opposition by the Villagers. In the news item given below, the photo of the plant looks like a makeshift arrangement. Does not look like a GMP facility. 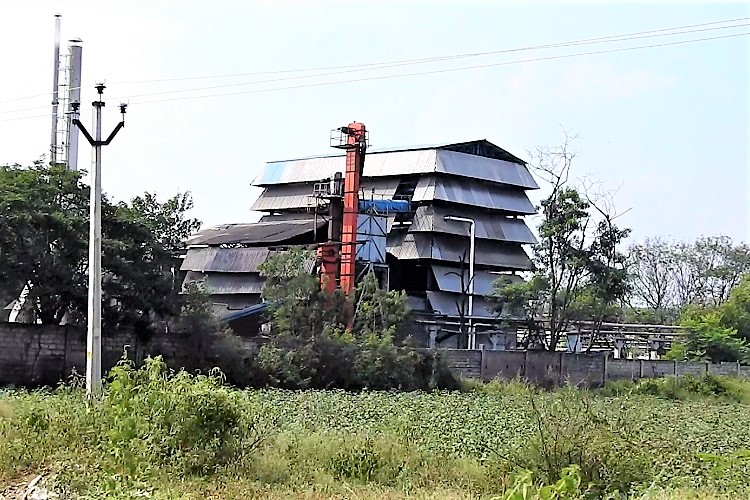 Hyderabad-based pharmaceutical company Everest Organics has received a closure order for its factory in Sadasivapet town of Sangareddy district in Telangana. According to a company filing to Securities and Exchange Board of India (SEBI) and Bombay...

Dear Raj
Several chemical and pharma companies are facing this problem through out india (globally also). In Andhrapradesh Divi also facing the same issue for its capex.
Yesterday I had a chat with someone from the company and they are confident to solve the issue within few days.
They had all the approvals from EC for the proposed 3× capex.

The company has provided a detailed explanation of capacity, production, and realization in the FY20 AR 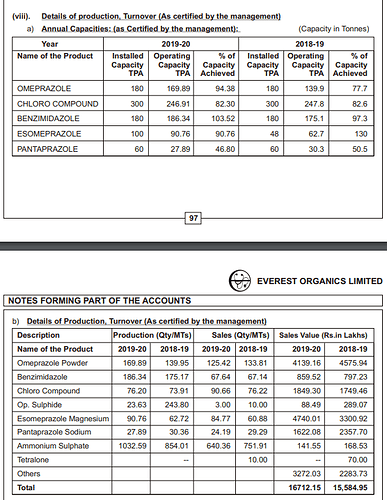 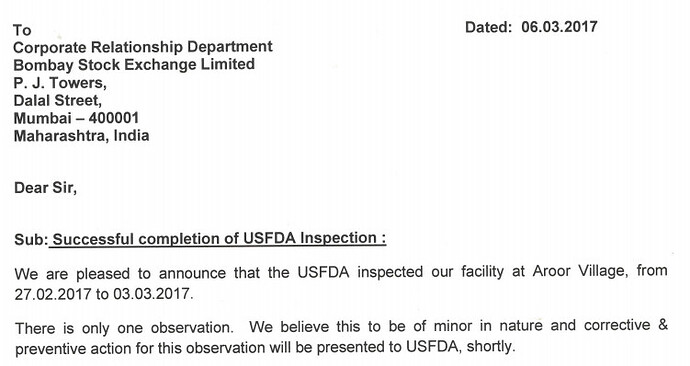 I spoke with their team about the entire environment issues and expansion.

They have more sums planned for year 2021-22 which is again not including the pallet plant
The first expansion that is due to go live before march 2021 will take capacity to double from what is now.

Since their current plants operate at near 100% utilisation, I think its very prudent to conclude that almost all the new capacity thats coming up will be utilised almost from day one
I am assuming 2021-22 capex will be again the same as 2020-21 and they are taking a prudent approach here. Most managements probably would take a debt and expand outright the new environmental cleared capacity

On environment issues and plant closure, I was told it is procedural. Because its issued by a government office, the clearance to start again has to come from government office and paperwork will take some time. They didnt directly say but the issue is around local politicians, surpanch, et al wanting a finger in the pie. In India I dont find this surprising although much of it is far reduced with the new bjp government but old habbits die hard. To address this they are also considering opening a plant in the hyderabad pharma city once the plans from the government are firmed up. If that happens shares will trade in a completely different league

I think near term triggers are, good results this quarter as has been observed accross all pharma companies, double production from next quarter once new factory comes online. Although personally I would like them to do only 50% next 2 quarters and 50% after that. And then for the following year they have another 50% based on new capex.

If they get the pallet plant, that will be additional revenue.

I know there a lot of points above and I make sense. I have taken time to put those and research those. Some of my posts on other threads are taken down without others warning. Like vipul organics I had a good note and someone voted it down so they can buy. Price of vipul organics went up based on research but the post is gone !

If you have problems with the post please mention them on a private message and I’ll remove those parts or change the wordings.

ps: the management is working on other small things, reducing interest rates, interim dividends etc but they are not firmed up yet and they cannot issue an update until they are. Besides disclosing those would be insider info. He gave me as much as he can without any possibility of passing insider info.

If anyone has any other questions which might not be considered insider info, do let me know and I think I can ask for clarification.

Thanks for your assessment of the company after your detailed discussion with their team. . Disclosure to Exchange by management that it is temporary plant closure …is it the statement of PCB ?if so why are they not publishing the PCB letter of intimation on Closure. IMO, it is a serious issue and management is downplaying it in disregard to pollution caused to the environment.

Management should have elaborated on the action taken by them to resolve the problem of pollution to the environment. Instead as stated by you that management is talking to PCB to lift the closure. It appears that the management wants to resolve by dialogue not rectifying the defect which is causing pollution.

This is unsettling and clarification by the management on this aspect will clear the doubts in the minds of investors.

Many thanks for your research. Much appreciated.

How do you expect the plant closure will impact volumes and revenue for Jan - mar qtr?

Any estimated time frame on when the plant will open - few weeks or few months?

How long and difficult is building a new plant in a different area and getting it certified etc?

The one in Hyderabad pharma city will be fast as the government wants companies to open a plant there so any formalities will be fast tracked, it all depends on when the city is open

Once the city is open, the building itself is a year or two

The current expansion of doubling capacity is almost over, around 90%

March quarter I don’t think they can comment but I think it will be lower and might give some buying opportunities on pull back. Unless if the nee plant goes up by mid Feb then their revenue should maintain. As half period revenue on double capacity is same as full period revenue on single capacity

The just finished quarter would have been probably same as last quarter maybe a bit higher on product mix but probably just marginally. They won’t disclose this insider info. I am assuming reading between the lines and that they are planning interim dividends

If they have commercialised rivaroxaban the profits will be very huge. You can look up the price rivaroxaban commands. Most of this finds market in countries that don’t enforce trademark and patents aggressively

Thanks, but the pollution problem seems like quite a serious issue with lots of activists saying that pharma companies are taking lot of ground water and discharging chemicals into the water that is making people fall ill etc. Not sure having all pharma companies in one zone is a good idea given all the water requirements etc.

Whilst the company fundamentals, product portfolio looks good they need to think of a sustainable way to develop.

Last time the plant was closed from oct-18 to april-19. Do we know if its going to be closed for a similar length of time (6 months) this time or probably more?

Maybe last time they managed due to inventory but given the higher sales level now, not sure if that is still possible.

Plant closure of 6 to 9 months this time will have a significant impact on financials I think.

You are right, it could have a significant impact on March quarter if its not resolved by mid Feb. If it gets resolved by Mid feb then it might not have any effect on revenue and profit
You are right about trying to resolve by dialogue. I think its the issue with most companies competing on cost and unless a mandate comes from the government that all industries should have a zero discharge plant, its not going to happen.
If people were responsible we would have cleaner water and air but almost every major cities are polluted. Most governments try to balance between production, competitiveness and health. I dont know if we as investors have much say here other than observing price differences and taking positions when the bets are distorted enough to give us a good margin on those bets.