I got the following response from Mr Ajay Mahajan

Ajay Mahajan resigns as MD and CEO of company. I don’t know whats happening in the company, it was definitely moving in the right direction. This resignation creates another round of uncertainty. 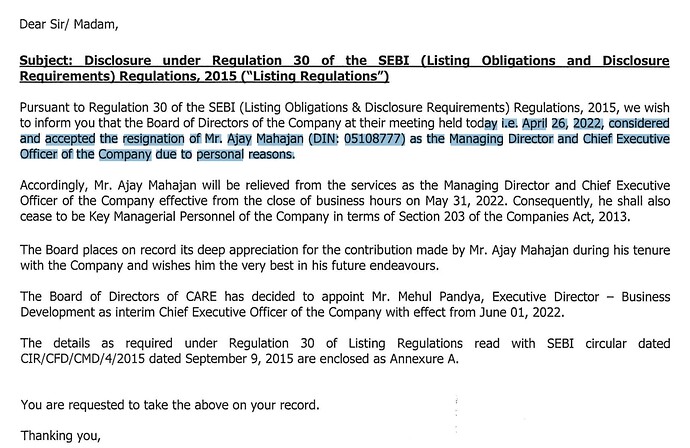 The resignation is truly quite abrupt given the sort of “vision” and “transformative journey” Mr Mahajan had promised. In hindsight, he wasn’t heavily invested in equity, and neither bought from the open market - but many non-promoter Indian CEOs never do so.

I think we’d have a bigger problem if the chief ratings officer quits in quick succession. He’d been brought in from CRISIL a year or two ago. That would point towards a larger problem inherent in the company. Unless rating quality detoriorates or unethical practices continue, there isn’t much point in selling out.

Isn’t there a notice period for resignations at this level?
Anyway, looks like LIC and CRISIL still hold around 10% and 9% stake approximately. Hope they will find a good replacement quickly.

Another average set of results from the company. The ratings revenue grew at ~4% which slower than both ICRA (8%) and CRISIL (7%). Additionally, there is churn at mid to senior management level. Shareholders were very agitated on management’s response to buyback, plus no specific reason was given for departure of Ajay Mahajan. Concall notes below.

The fact is CARE is relatively weaker then ICRA and CRISIL . The only adv they had in past is low cost structure ( which enabled lower pricing ) , which was destroyed in last 2 management changes who tried to make CARE like ICRA and CRISIL … which was stupid I am sure now that the exit of Mr Mahajan was not on good terms. I am still a holder in my smallcase portfolio [https://simpleinvesting.smallcase.com/] but things are not looking great.

Its a marginal value play here. On the conference call, many investors expressed anger at sitting on the cash pile and doing nothing. The silence of the board is also surprising there.

Hi All, I am new to the forum. Have been researching CARE and ICRA for a while. Though both are almost in the same earnings range. ICRA have an upper hand due to its Moody’s parent strength… CARE on other hand trading cheap.

3 decades back foreign banks were dominating India for people who look for premium service and for people who look for additional services more than savings and loan… Slowly Indian banks like HDFC, ICICI learned the know how and attracted the accounts from foreign banks by providing elite services to customers… Now Citi once the bank for elite and rich Indians is closing its business in India…

Any competitive edge CARE is having to complete ICRA and CRISIL?

Disc: Holding both ICRA and CARE with very limited allocation. Wanna close one position and keep only one for long time dividend income…

Thanks in advance members

Shareholders were very agitated on management’s response to

Company announces board meeting to consider buyback. Finally it seems board is hearing to shareholder suggestions. Lets see what comes out this board meeting. 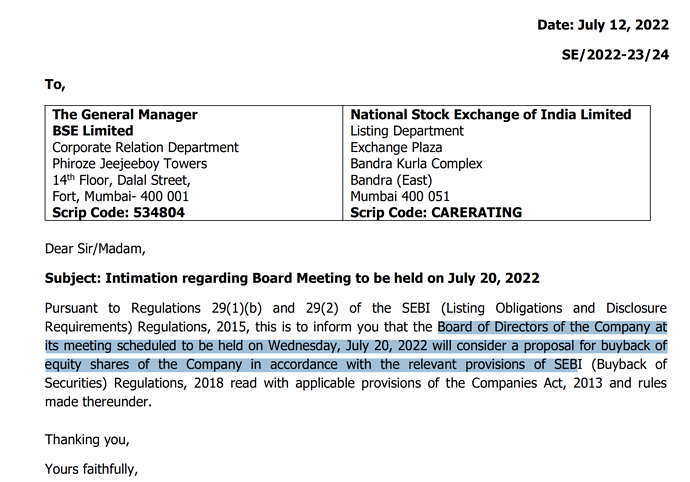 While care has announced buyback, the offer seems not so great. I personally feel company is more valuable than the price offered. It does provide an exit for investors fed up with the management. At the mentioned price, they’re buying back 23.68L shares out of 2.96Cr shares outstanding.It forms 8% of the company. So at 75Cr TTM profit and 2.7232Cr shares remaining after buyback, the EPS will be 27.5 and even at the price of 500/Share, it’ll be valued at 18.5X of it’s historic lows in earnings which is seen in this year.

To sum it up, the buyback price is providing an exit for investors fed up with management although the price is not attractive enough to sell your holdings if you are a value investor, especially considering increased value per share after buyback and I feel management has succeeded in disappointing its investors once again. It makes no sense for investors to consider selling at 515 as many investors have bought the company at price much higher than that.

Buybacks increase the ownership of shareholders who don’t participate in the buyback. If a company buys back at lower price, the company is using less money to buy same amount of shares than at higher prices. A value investor invested in the company is benefited when the company reduces the number of outstanding shares and increases the future earnings per share and dividends per share. A value investor is benefited when X+Y shares are bought back at Z price instead of only X shares bought back at Z price.

One important disadvantage CARE has is that they probably can’t invest in cheaply valued equities unlike holding companies like say Bajaj Holdings or Tata Investments Ltd because there will be a conflict of interest as they are in the ratings business. So the only options available to Care Ratings for rewarding shareholders is to 1) Buyback shares 2) Pay dividends 3) Reinvest in business to increase intrinsic value. Think they should go for an open offer and pay the premium they are currently offering as dividends if they can’t reinvest.

What you say in theory makes sense, but there is a lot of difference between theory and practice. The realities for the Indian market are very different from that of the American market where Buffett operates. In India there is reservation for Small Shareholders so buybacks are a lot more profitable for them than it would have been otherwise.
If the average acceptance is around 25-30 percent it makes sense with experience to increase your holding in such a way before the buyback that after acceptance the position size remains approximately same as the original. A higher price is a lot better for small shareholders and thus the premium is very disappointing. Would have preferred buyback price around 600 where shares bought back at same 121 crores amount would be close to 7 percent instead of 8 percent of outstanding shares.

There is no valid reason to not participate in the buyback. It is tax free so no tax considerations unlike the US market and whatever is bought back as part of tender offer at a premium can be bought at a discount again from the market.

Here is a thought experiment. If the company was buying another company’s share at market price as an investment, would you want them to pay more or less to acquire those shares? Surely, if they pay a premium for that share, the selling shareholder will benefit at the expense of the shareholder of the company. Shouldn’t the same argument apply for buyback of shares?

Also buyback at a premium benefits the larger shareholder more than the smaller shareholder since they get a bigger piece of the premium pie. Not that there is anything wrong with that. That’s how it goes but tender offer is not an efficient way to allocate capital. These buybacks at a premium might benefit those that come under 30%+ bracket but not the small shareholder as the buyback tax is 20%.

Here is an extract from this article on buybacks:

“Repurchases - is sensible [allocation of capital] for a company when its shares sell at a meaningful discount to conservatively calculated intrinsic value. Indeed, disciplined repurchases are the surest way to use funds intelligently. It’s hard to go wrong when you’re buying dollar bills for 80c or less. But never forget: In repurchase decisions: price is all important. Value is destroyed when purchases are made above intrinsic value.” Warren Buffett

“Analysts tend to be cheer-leaders for corporate re-purchase programs. In my view, these programs only make sense under one condition – the company is buying back shares that are significantly under-valued. Most management teams have demonstrated the total inability to understand what their businesses are worth. They’re buying when the stock is up, and have no courage to buy when the stock is down.” Leon Cooperman

“My suggestion: Before even discussing repurchases, a CEO and his or her Board should stand, join hands and in unison declare, ‘What is smart at one price is stupid at another’.” Warren Buffett

“When the board of directors of a company decides to buy-back its stock in the open market, it may well be a sign that they believe the shares are undervalued and do not adequately reflect the prospect for growth. They feel that the best return on corporate cash is by buying up their own shares in the marketplace.” Christopher Browne 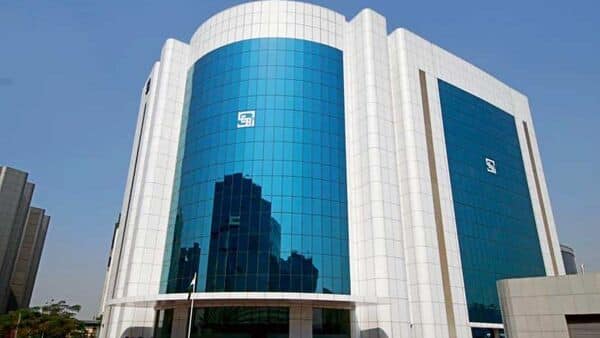 Sebi orders Brickwork Ratings to shut down within 6 months

Sebi issues winding up order against Brickwork Ratings, asks them to wind down operations within six months

Yes. I agree with all your points except the H1FY23 earnings has been good.
Just sharing it below. 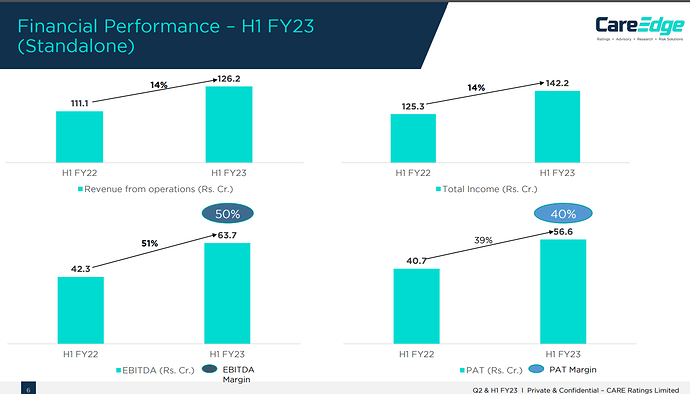 My Few Cents on CARE

CRISIL is owned by Standard & Poor Global, ICRA is owned by Moody’s & Fitch is also an American Company. So all these big ones are owned by Foreign Promoters. Care is Indian in origin and professionally managed without any promoters.( ? Make in India)

Technically, it has crossed the Golden crossover at 500 level and is in uptrend.

Have taken initial position at 550.

And if you want to get market-beating returns, you have to find them in the undiscovered and out of favour sectors.

Basically , its like Mohnish Pabrai says - Heads, I Win; Tails, I don’t lose much.