Bull therapy 101-thread for technical analysis with the fundamentals

I am a newbie in Technical analysis, have noticed cup and handle patterns in IOLCP and Gmm Pfaudler .
IOL Chemicals and Pharma Ltd
The stock was going though a consolidation face in long term (weekly chart) and breakout happened with the cup and handle pattern.
Height of the cup =140.Target price will come near to 420.
Stop loss can be near to 270 (in case the pattern is not working). 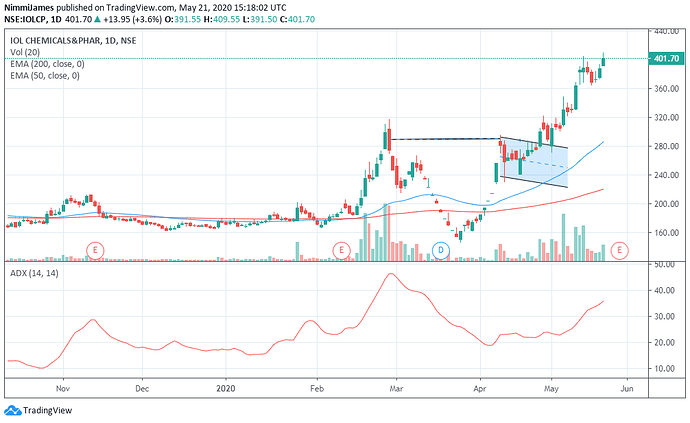 Fundamentals Triggers:
Company has just started paying dividends and has reduced debt.
Good profit and sales growth.
Few of its products has increased demand due to coronas crisis.
Disclaimer : Not Invested ,but tracking 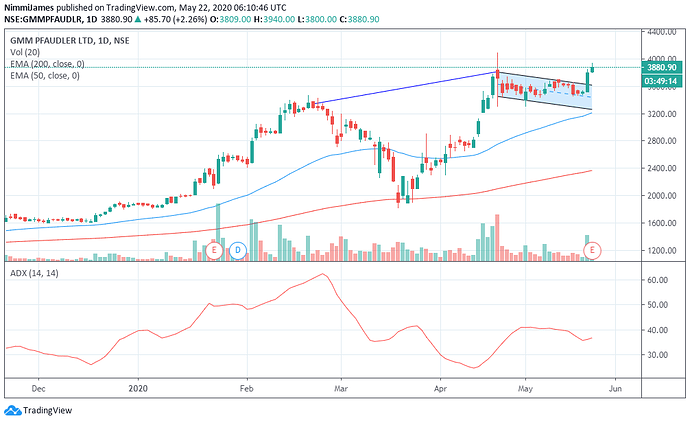 Fundamental Triggers:
Order backlog increased.Not much effected due to lock down.
Finalized few large orders recently.
company is setting up another facility Hyderabad(after lock down), which will help to get better reach of its customers.
Disclaimer : Not Invested ,but tracking

Cosmo films - rounding formation at the 50% level. expected move up to 350 levels. I have posted my views on cosmo in its thread. Though BOPP is a cyclical business, the cycle was improving before Covid with improving margins. There was no major capex addn planned for the next 2 years at least however post covid we are seeing improved capex ( for e.g Vacmet India launching both BOPP and BOPET lines in Indore) indicating more tailwinds to the demand scenario 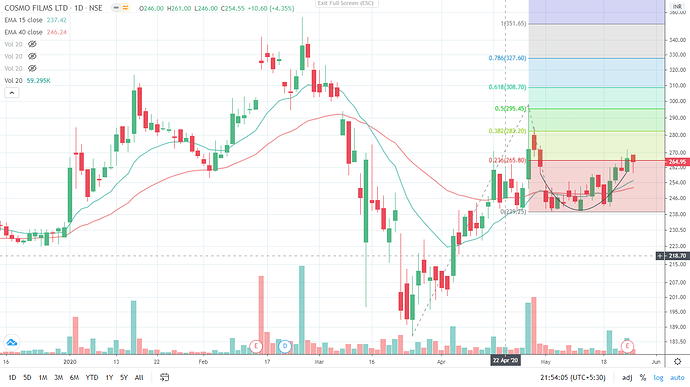 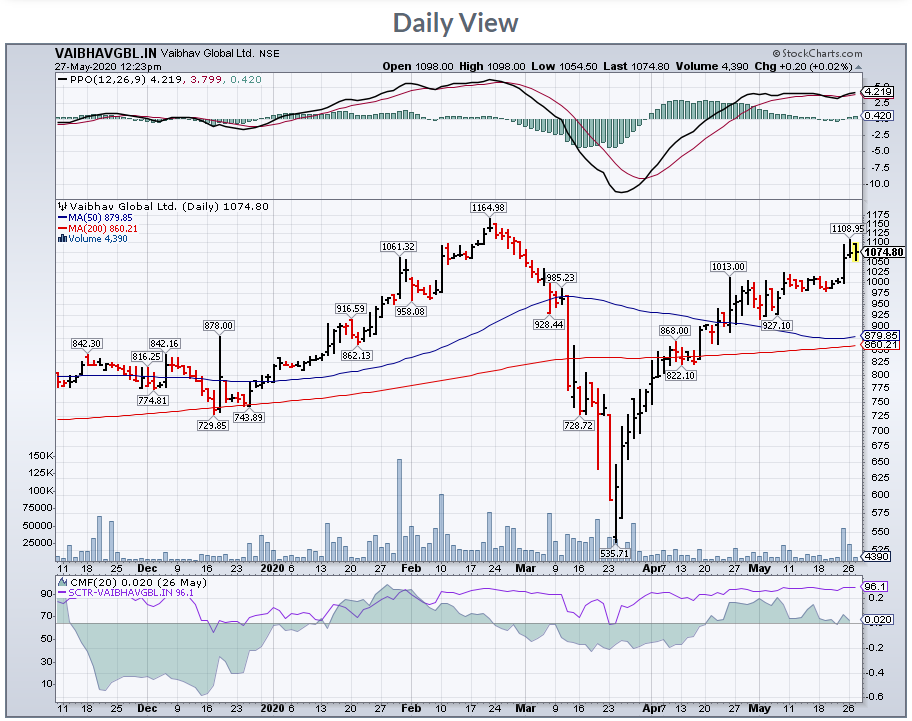 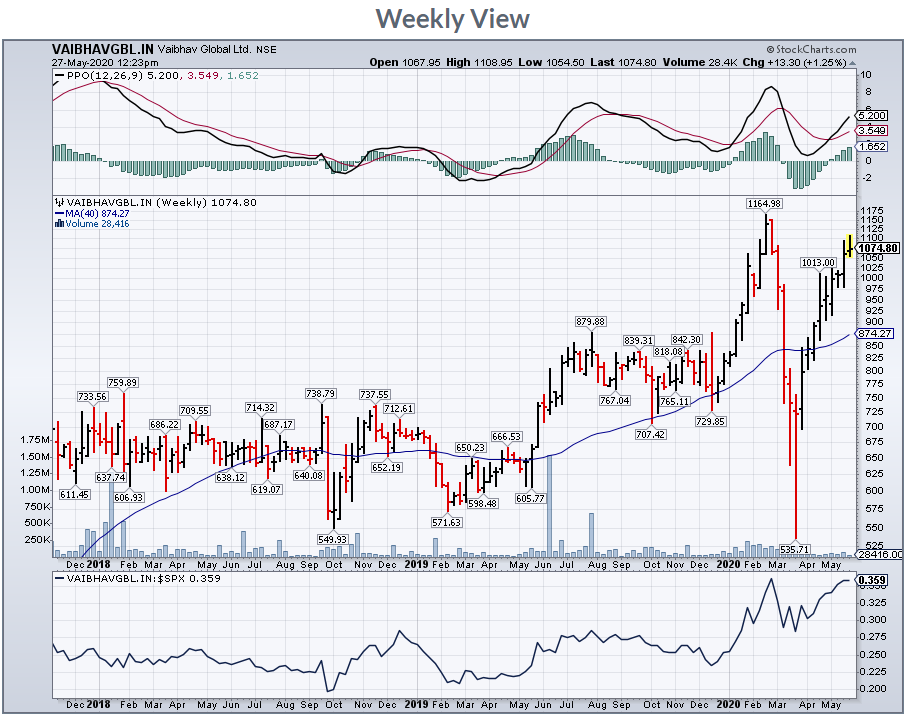 The below chart is shared by JC Parets.

Alembic pharma has been worked on extensively on VP with management meet notes, deep dive, stock story and the thread itself being well populated with learned opinions. Fundamentally it seems to be on the cusp of strong growth. Putting up a long term monthly chart with guppy multiple moving averages plotted. This type of chart tends to take out the whipsaws and provides a clear pattern if there is any. more comments on chart. disc: invested and added recently.

Can Hexaware catch up

About to break out of it. Fundamentally, 90k Cr debt and 10k Cr equity - EBITDA could be 15k Cr this FY - making it trade at about 6 times EV/EBITDA. Any incremental increase in EV will have disproportionate gains on the equity. First it has to remain solvent - Fund infusions from the parent, if it happens or from other parties, can ensure this. After this, its a matter of SC approving govt.'s request to allow for deferred payments. This will dramatically improve cash-flows in the near-term allow for thriving from a struggle for survival.

If I correctly read ur words then U’ve tried to mean (i.e- Above upper channel of downtrend line it’ll try to become solvent).Now we need to see the genuinity of the news of alphabet inc.(since Mr. K.M.Birla made statement of shut down option) which is the whole reason of this spike.

@Jiitt007 My thesis was purely fundamental when the EV was around 95k Cr or so (Around Rs.4/share levels). If someone was willing to buy the entire company, they get an EBITDA about 1/6th what they put in, in the first year. The reason why no one would do it is of course the AGR liabilities, regulatory risk, currency risk and poor laws (if the money comes from abroad that is). All these still remain and even the parent had very recently pretty much written off their equity in the company. So the main question was, can the company survive? If it does what will I make and if it doesn’t, what do I lose?

All this has to be seen from a game theory standpoint - It has been one bad news after another to Airtel and Idea in the last few years as they lost market share, battled with the AGR dues and struggled with servicing debt. In this situation, the parent doesn’t want to send good money after bad and that’s perfectly understandable. See this from the perspective of the govt. - Can they allow Voda to sink and make it a 2 player market? They clearly can’t and that’s why they agreed for deferred payments but SC put in a spanner in the works. At the same time, the price-war in the sector is over. Now none of the players are ready to play the price-war game and they are increasing prices like a cartel and it shows in the ARPU.

This considerably improves the odds of a survival as money coming in, has less headaches to deal with and that’s what is currently being priced in (before today’s rally). Now if the SC decision goes in favour, cash flows in the next few years will improve considerably, and then from surviving, it will be a matter of thriving. I bought because the risk of ruin was minimal (mostly in the price) and was curious to see if the thesis played out. I feel there are lot of things which can possibly work out and as the market sees this news incrementally, slowly EV will keep increasing along with the other two players. Here though a 10% increase in EV will double the Market cap (at least at the time of my initial thesis), so the risk:reward was tremendously favorable. We must also consider the cost of capital elsewhere in the world. Large tech companies have large capital without any avenues to invest and interest rates are negative or zero in most economies as a consequence. Odds of someone taking a bite in an opportunity like this is somewhat high.

These things don’t always work out and they especially will not work out if the regulatory risk is too high (as in this case) and the interest coverage ratio is abysmal. Here interest coverage ratio is improving and sector dynamics is getting buyoant and any incremental topline, flows directly to operating earnings (Interest monster still stays ahead of the bottomline) which makes the odds of survival relatively higher. Even now things can go down south if SC is adamant and is intent on killing the business (for what joy though?), but the valuation gulf between which way that decision goes is too wide and it will slowly get priced in, along with the sector dynamics.

(post withdrawn by author, will be automatically deleted in 24 hours unless flagged)

@phreakv6 What are your chart settings?

May ended Updated Long term chart for Nifty . My 2 cents 7511 may be the low. I came to know that PFAS fully invested at that level. 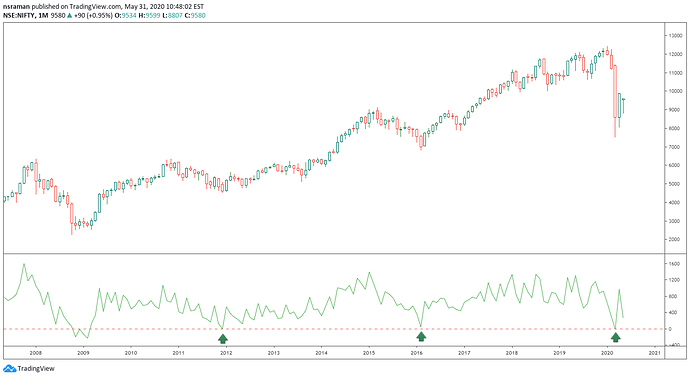 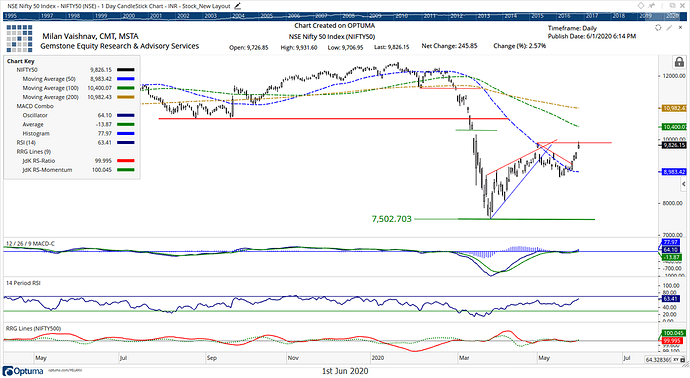 Arman, monthly - At around 1.5 times book, maybe the worst is the price? Management has handled things well during demonetization in terms of stopping disbursements and focusing on collections. This though is a different situation where their usual strategy of door-to-door collections may be having trouble due to Covid-19. Since they lend predominantly to rural which is relatively less affected, it may be able to bounce back sooner relatively. It fell 40% during demon and consolidated for a year. Now it has fallen about 60% (It was very expensive to start with, so the actual fall looks exacerbated). As a good business with decent management, its probably worth looking at. Technically at long term support and available at 2016 prices when their book was about 1/3rd. 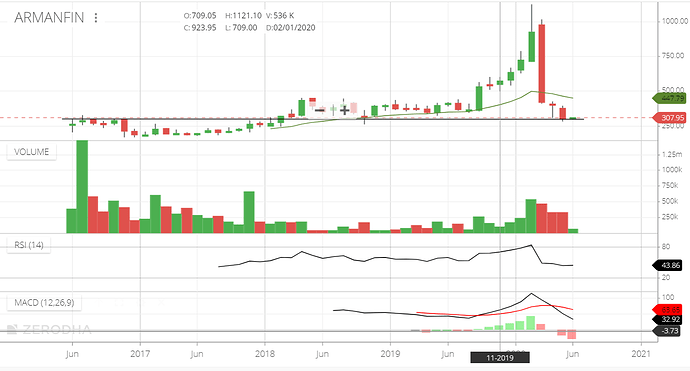 Disc: Have positions from around 300.

Update: Voda might be breaking out of a long-term downtrend on the monthly. My earlier chart appears to be bit flawed - @value_investor - I think this may have been the reason you asked for my chart settings. Looks like Zerodha’s data has a large incorrect gap down on Mar 29th, 2019. Investing.com’s chart looks to be more accurate. This is in log-scale (I use log-scale for large changes, as it gives a more accurate picture of the psychology).

ARMAN WEEKLY CHART SHOWS A VERY NICE TRADING CHANNEL WITHIN WHICH IT USED TO TRADE BEFORE IT TOOK OFF AND WENT INTO A BUBBLE PHASE AND SUBSEQUENTLY AS HAPPENS WITH ALL BUBBLES, IT BURST BADLY. REST OF THE COMMENTS ON CHART.