Bandhan Bank - in a sweet spot?

External Benchmark Based Interest Rate mandatory for certain categories of loans from October 1, 2019

I think this will affect profitability of all banks
Banks have to compensate by increasing prosessing fees or other charges (ofcourse The banks are free to choose one of the several benchmarks indicated in the circular. The banks are also free to choose their spread over the benchmark rate, subject to the condition that the credit risk premium may undergo change only when borrower’s credit assessment undergoes a substantial change, as agreed upon in the loan contract.)

Deposit rates will also come down

The profitability of every sector is affected, and stock prices have corrected to say the least. Even crashed in some cases, individual companies and even entire sectors… then why banking and finance stocks are still demanding the top dollar!

When do you see banking and finance stock price and company profitability reflect the gloom and doom in the Indian Economy?

Axis Mutual Fund has increased their holding in Gruh. Seems even they took this route to avail Bandhan at reduced rate.

Are there anybody on this forum who is from Eastern part of India ? They will definitely have better visibility than people who only depends on pdf reports and books.

Please share us about Bandhan Bank reputation , Brand, Promoters and any other significant observations.

I am thinking that “Bandhan Bank” is equivalent of “HDFC Bank” or “SBI Bank” for that region.

I am from West Bengal but I can’t compare Bandhan with HDFC or SBI. But yes they have a popularity among the unbanked sector like house maid , small roti maker shop etc. Special ingredient for them is to get a hassle free trusted banking system. So far this class was mostly dependent on cooperative banks and ponzi scheme or chit fund for sourcing and saving of capital which more often than not turn out to be a fraud but now they have a trusted bank of their own which provide door to door service. This class is mostly loyal and specially the women are credit worthy with their small amount of savings and honesty at work. Problem with them is they do not understand banking system so do not like to go to the branches of SBI or HDFC and here Bandhan is having an edge. Also recently I found Senior citizens are developing a likelihood for this bank for higher interest rate on Savings as well as FD.

It’s good that they have got good popularity among women borrowers and senior citizen depositors.

One more question, as you are from West Bengal please answer.

What kind of bonhomie Bandhan had with political parties out there especially with TMC ?

Is there any possibility that in near future they may take terrible populistic call which spoils Bandhan’s party?

Your responses are very much appreciated.

Problem with them is they do not understand banking system so do not like to go to the branches of SBI or HDFC and here Bandhan is having an edge.

What kind of bonhomie Bandhan had with political parties out there especially with TMC ?

Is there any possibility that in near future they may take terrible populistic call which spoils Bandhan’s party?

You need to research about Mr. Ghosh and how he started, you will get your answer.
In this thread, detail research and data points available about bandhan. Would suggest to study them.

Yes. Since he reduced the stake by merging with Gruh. Currently the stock is trading 18 per cent lower than its average one-year forward valuation, while return ratios are likely to remain strong


Concerns over the near-term impact of its merger with Gruh Finance and the pending promoter stake dilution among others, has weighed on investor sentiment for Bandhan Bank, which had a great listing in March last year. With a fall of over 16 per cent in its share price in the last three months, Bandhan Bank has also underperformed the Nifty Bank index that fell by 9 per cent during the same period. The correction, however, has led to a sharp fall in the valuation of the bank’s stock. It currently trades at 3.6 times FY21 estimated book value, which is an 18 per cent discount to its average one-year forward valuation since listing and a sharp 42 per cent discount to its peak valuation.

Though the Gruh Finance merger, which is expected to be completed over the next two quarters, would impact earnings growth to some extent, Bandhan’s long-term return profile remains intact. Even over the next two years, Bandhan’s calculated RoA would remain almost at FY19 levels of 3.9 times levels as compared to below 2 times in case of other small banks, say analysts.

Besides a likely strong loan book growth, healthy liability franchise and lowering operating expenditure improves Bandhan’s return ratio outlook. Given the pricing power, mainly in the micro finance business, maintaining deposit base going ahead, is unlikely to be tough. Even in June 2019 quarter, Bandhan’s deposit base grew by 42 per cent year-on-year versus low double-digit growth for the entire banking sector.

Higher deposit base would also help curtail margin pressure expected from the lowering of its high-margin microfinance book. The latter’s share in overall loan book is expected to decline to around 50 per cent over the medium term from 86 per cent at present.

Overall, long-term investors could bottom fish on corrections. The lowering of promoter stake, however, would be key to watch.

Finance Minister Nirmala Sitharaman holds a press conference after meeting heads of private banks in New Delhi today. Small finance banks have not faced any blip in one year, says FM Nirmala Sitharaman. Bandhan Bank’s C Ghosh hopes for a better festive season. Demand to take off in festive season in this quarter and next quarter, he said.

Private sector banks to join govt’s loan outreach programme.Finance Secretary Rajiv Kumar
invited private sector banks to join
the outreach programme in 400 dis-
tricts for potential lending. The first
phase of the programme will start in
250 districts from October 3-7, he
said. The next phase will begin
around Diwali. Maintaining that
there was no liquidity issue, Kumar
said the outreach programme was
being organised to take advantage of
the festival season.
“We see a huge opportunity in the
outreach programme announced by
the government. We feel that this is
an opportunity for us to do our dhar-
ma,” Kotak Bank ViceChairman and
Managing Director Uday Kotak said.
The finance minister indicated
that the economic slowdown seemed
to have bottomed out and the com-
ing festive season would help the
economy start looking up.

Approval of the National Company Law Tribunal, Bench at Kolkata (‘NCLT Kolkata’) to the scheme of amalgamation of GRUH Finance Limited (‘GRUH Finance’) into and with Bandhan Bank Limited (‘Bank’) under Sections 230 to 232 of the Companies Act, 2013 (including the Companies (Compromises, Arrangements and Amalgamations) Rules, 2016) and other relevant provisions under applicable law (“Scheme of Amalgamation”)

Is this the last step of series of approvals required for the actual merger ? Or do we know if any other body is pending to approve the merger.

Disc: Holding Gruh in lieu of Bandhan at higher levels - 5% of PF

This was the last step from Kolkata NCLT. All set to merge both company balance sheet now.

The Scheme of Amalgamation will become effective upon the filing of the orders passed by both NCLT Kolkata and NCLT Ahmedabad with the respective jurisdictional Registrar of Companies.

The jury for the Economic Times Awards for Corporate Excellence voted for quality growth, corporate governance and long-term vision. The winners were bound by a common thread — they were all bold, ambitious and committed to creating a better society.

Kolkata-based Bandhan Bank won the Emerging Company of the Year

This is happening so fast. 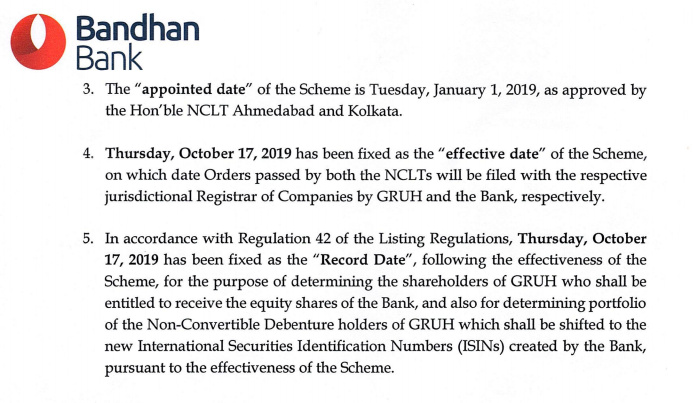 In the wake of the Andhra Pradesh micro finance crisis in 2010, a Sub-Committee of the Central Board of the Reserve Bank was constituted to study issues in the MFI sector.

Taking into consideration the important role played by MFIs in delivering credit to those in the bottom of the economic pyramid and enable them to play their assigned role in a growing economy, it is proposed to revise these criteria:

The housing loan limits for eligibility under Priority Sector Lending were revised during June 2018 for Scheduled Commercial Banks only.

the housing loan limits for eligibility under priority sector lending is revised to Rs 35 lakh in metropolitan centres Rs 28 lakh earlier (with population of ten lakh and above), and to Rs 25 lakh from Rs 20 lakh earlier in other centres, provided the overall cost of the dwelling unit in the metropolitan centre and at other centres does not exceed Rs 45 lakh and Rs 30 lakh, respectively.

Further, the existing limit for family income of Rs 2 lakh per annum for loans to housing projects for home construction economically weaker sections and low-income groups, is revised to Rs 3 lakh per annum and Rs 6 lakh per annum respectively in alignment with the income criteria specified under the Pradhan Mantri Awas Yojana

This may increase loan ticket size of Gruh finance also

Disclosure . Invested in Gruh finance since it’s IPO and added more as it’s going to merge with Bandhan Bank

This is happening so fast.

The process has already taken 10 months as we stated in January. I feel it’s good as market doesn’t like uncertainty and we have seen gruh suffering on account of this during the amalgamation process. Let us see if Gruh impacts Bandhan and creates wealth for investors. I know many people who are invested in Gruh and have seen it performing well in each weather.

I look forward to see the merged book and let market take decision whether the merged entity keeps investors happy… the way earlier entities kept them interested and rewarded.

The new limit is for NBFC-MFIs (positive for CreditAccess Grameen or Satin or Spandana). Bandhan, being a bank, is not bound by limits on NBFC-MFIs.