I looked at the various metrics between Astral and Supreme Industries which are in the same business. The ROCE is slightly better for Supreme and it is slowly catching up on the profit margin as well. Valuation wise Supreme is better than Astral. However, the market is giving a premium valuation for Astral for several reasons beyond my understanding.

I have the below queries for my understanding purpose.

Disc: Invested in Supreme Industries and closely watching Astral to make an entry.

B2C is always a difficult to break in.

There are other companies where ROCEs are similar but for their B2B vs B2C P/E multiples vary.

I think it is not a question of Astral diversifying away from its core competence, it is the other way round. Both adhesives and sanitaryware get higher valuations than PVC pipes. Look at Pidilite, Cera, Kajaria etc.

PVC pipes is after all a commodity business, even though companies are making attempts to build brands. Competition is increasing both from the organized and unorganized sector. Existing players are increasing capacity and new players have entered. Hindware has launched its products in South India. Prince Pipes has tied up with Lubrizol. Apollo Tubes has openly said its strategy is to give higher distributor margins (i.e. undercut others) to gain market share. Meanwhile, this quarter (Q3) as the industry went through a difficult patch, market shifted from organized to unorganized due to lower prices of unbranded products. This is opposite of what everybody is betting on. Anti-Dumping Duty on PVC resin imports is being removed from this month. This may bring down prices further, reduce margins and increase imports and increase competition further.

Astral promoter is also rated very highly (Mr. Engineer) on competence and ability. that is why I think Astral gets higher valuation than others.

(Disc: I had Supreme at one time but have exited completely. No positions in Astral or any other companies mentioned. I may be wrong so please take your own independent decision.)

Thanks @nikhil_chowdhary and @Chandragupta for sharing your views. I shall study further on this. Appreciate that. News is exciting. Astral entering into paint vertical. In last 1 year many new players have entered into paint business. Is it some “me Too” or FOMO phenomenon during corporates? will this affect the concentration of Astral on its core business? Kindly shed some light.

We are affirm that we will continue to grow higher than 15% CAGR in the next 5 years. 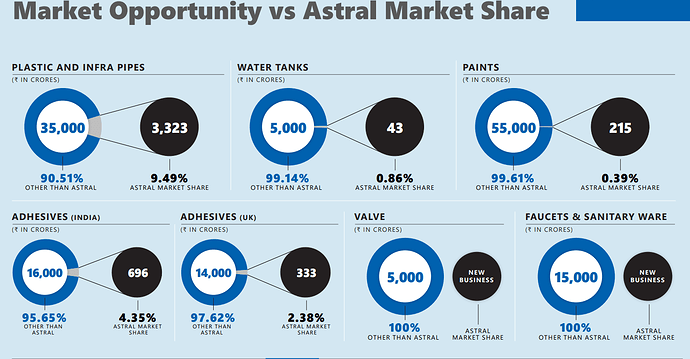 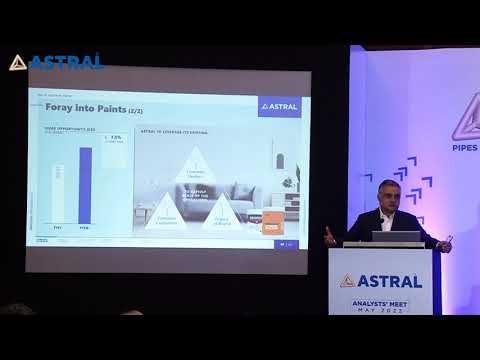 Astral poly keeps hitting new lows. While a healthy correction is good to accumulate, is it due to any effect of rerating by way of diluting their focus in their core segment since they announced their foray into new verticals like paints and adhesives?

Astral share price moved faster than the earnings. This was bound to happen. It just needs some excuse for falling. Just like other stocks.

They entered adhesives in 2014 by acquiring Resinova and Seal it. The price consolidated for the next 2 years and only started moving from 2017. During this period, sales slowed down and the margins dropped. Investors could be anticipating similar consolidation due to their foray into new segments- faucets, sanitary ware and paints. This could be another reason for the correction.

Astral is about 14% of my PF and it is my largest holding.
I’m optimistic about Astral’s future for the following reasons:

Im invested in Astral since 2014, hence my views may be biased.

While a healthy correction is good to accumulate, is it due to any effect of rerating by way of diluting their focus in their core segment since they announced their foray into new verticals like paints and adhesives?

A key concern in the stockmarket for Astral has been around its entry in the faucets and sanitaryware business in FY21, followed by its entry into the Paints business in FY22. Both these segments are competitive, with strong incumbents and no apparent competitive advantages for a new entrant like Astral.
.
Our take: Astral entered the paints business by acquiring a 51% stake in Gem Paints, a south India based company, at a valuation of Rs400 crores. Gem Paints is a profit-making business, with revenues of Rs215crs, EBITDA margin of 15% and a recently completed capacity expansion program. Although the paints business is highly competitive, we believe Astral has adopted a strategy that mitigates, to a large extent, the associated risks. Firstly, its acquisition does not require setting up manufacturing and distribution from scratch (remember, distribution is the key barrier to entry in this sector). Secondly, according to their purchase agreement, the existing promoters of Gem will continue to run the company for another five years, during which Astral has the opportunity to learn about the paint business. Thirdly, by buying a profit-making business, Astral has to manage only operational improvement rather than driving a financial turnaround. And finally, with a total acquisition cost of Rs400crs, the company has kept the absolute capital commitment under control (Astral has net cash of Rs557crs on its balance sheet), and not put the other businesses at risk. Additionally, the acquisition gives Astral the ability to leverage around 3,000 retail touchpoints in four southern states, for its pipes and adhesives business.
.
For the faucets and sanitaryware business, Astral has launched a wide range of products and is leveraging its existing large pipes distribution network (1,000+ distributors and 35,000+ dealers) to reach the consumer. To run the business, the company has hired the former CEO of Cera, Mr. Atul Sanghvi, an industry veteran, which we believe is the right strategy that brings in the required expertise and focus necessary for a new business and does not stretch the promoter’s and management’s bandwidth. Further, while retaining the design element in-house, manufacturing has been outsourced currently, with a plan to gradually build capacities as the business scales. In this business too, we believe that such a calibrated approach to capital allocation is appropriate.
.
Another concern for Astral was related to its lower growth in Q4F22 relative to peers. Astral’s Revenues from pipes grew at 22% YoY whereas pipe revenues of peers like Supreme and Finolex grew by 37% and 42% respectively. EBIT margins of Astral Pipes were 15%, down by 140bps QoQ and by 530 bps YoY. Margins of Astral Adhesives too fell to 10.7% in Q4FY22.
.
Our take: While Q4 was a relatively weak quarter for Astral, for the full year FY22, Astral grew its revenues from the pipes business by 39% yoy, whereas revenues of Supreme, Finolex and Prince Pipes grew by 23%, 46% and 28% respectively. These numbers indicate market share gains for Astral versus Supreme and Prince. Even in the case of Finolex, we believe that its revenue growth was led largely by agri pipes, a segment in which Astral has a limited presence. In turn, this implies overall market share gains for Astral. Astral has also remained the margin leader across the pipes industry with 15% EBIT margins in FY22 (for the pipes segment).
.
Coming to the adhesives business, the fall in Astral’s adhesive margins in Q4FY22 was mainly because of the increase in prices of inputs. Astral has taken price hikes which should be visible in margins with a lag of a quarter. 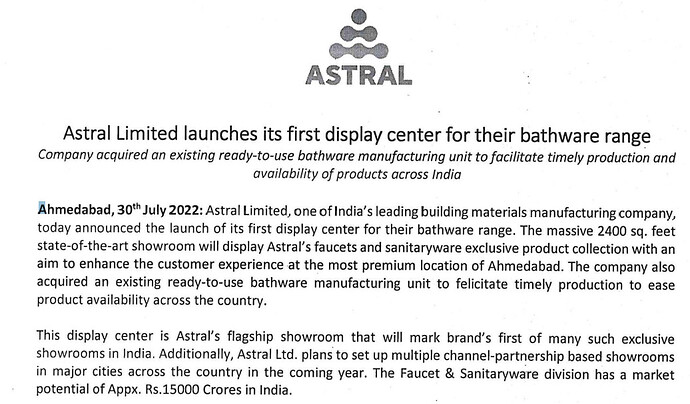 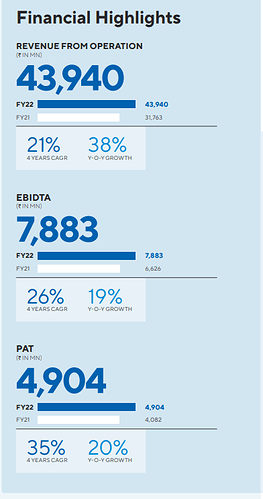 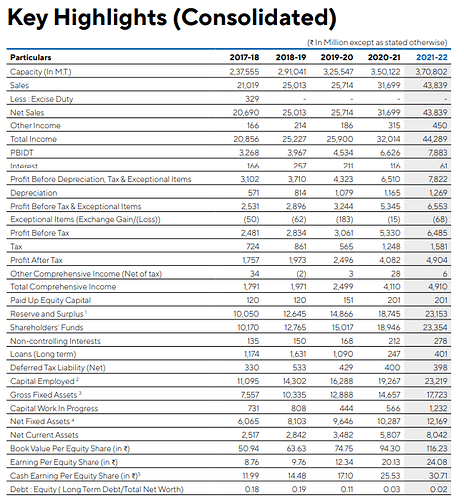 Astral pipes conference call recording can be listened through this link 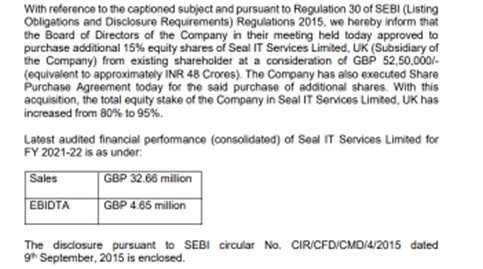 Can someone help me understand the current PE ratio (close to 100) of Astral and how one is to interpret it.

What kind of future is the market discounting at such a high multiple? What is the moat that this company has?