The QoQ growth has reduced. IMO the prices have gone down solely due to the market sentiment of a low quarter result for March 2017 without appreciating the YoY growth.

Even if the June Quarter results are better, one should look at the larger picture! Without letting the ups and downs of a quarter affect one’s evaluation of the company.

Out of 7 Cr of net income for Q4, almost 5 Cr is other income. Based on the annual report of 2015-16, this other income is most likely from gain on sale of shares from its investment portfolio. Company holds a sizable investment portfolio that is actively managed. Both Jayakrishna brothers have background in finance (and not in chemistry). Operating profit at least for Q4 is barely 2 cr. Without booking the gain on sale of investments, net profit for Q4 would have dropped to 2 cr.

Company is not adding vinyl sulphone capacity even though it earned good profits from this segment in FY17. It means it is expecting prices to drop and profitability to erode. Real earning power of the company is between 18-22 Cr on an equity base of 133 Cr. Fair value of the company should be around 250-300 Cr against current market cap of 567 Cr. So company is overvalued even after recent decline.

what method did you use to calculate valuation ? DCF / FCF ? 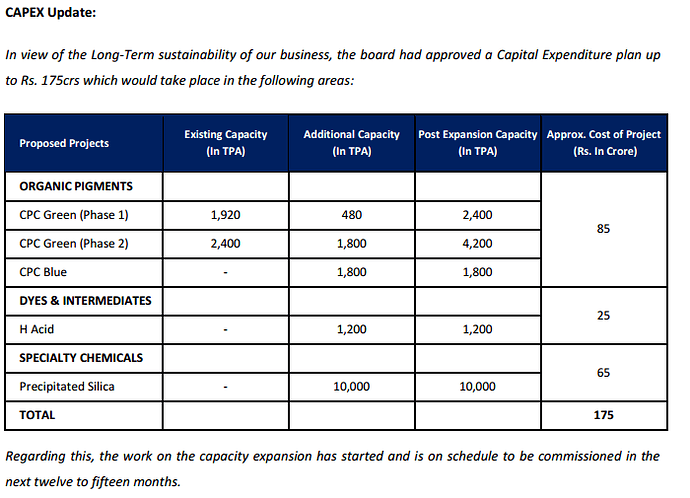 sales contribution : 60% throught dyes and intermediates and 40% due to pigments,
production capacity:

possible reason to put vinyl sulphone aside may be due to the amount of wastage that vinyl sulphone production is huge, expanding these plants would be risky ? anyway they are the huge exporters of VS currently

so its better to expand pigments capacity in order to deal with sales requirements and widen their portfolio of products, a kind of product diversification ?

is the QOQ figure having wide gap because of Jump of Vinyl suplone during that quarter ? and later did the VS price settled, i did not find the VS trend graph actually

more than QOQ results, its the decision which made retail investors to run ??

all the above are apprehensions only
it would be much useful if any suggest on proper valuation of the scrip, to know the right exit time

Disc: invested and so biased even in questions

what method did you use to calculate valuation ? DCF / FCF ?

This is a ballpark number I arrived at by looking at earning power and return on equity. At an earning power of 18-22 Cr and assigning a PE of 13-15 gives a valuation of 280 Cr. company has a ROE of 15% with plenty of volatility ( read as risk) so a residual income model will yield a price to book of no more than 2.
I generally do not use DCF for commodity companies that do not have consistent operating history as without that it becomes difficult to project future cashflows with any reasonable certainty.

Since my ballpark number is way off the market value I didn’t really dig deeper into valuations.

Any special reasons for the quick jump ? has any MF entered or temporary momentum ?

SP Tulsian has recommended it. Due to pollution issues couple of other companies will be effected.So with increasing capacity seems to be a good bet

Thanks i have found an article on same

Here's why SP Tulsian recommends a buy on Aksharchem

In an interview to CNBC-TV18, SP Tulsian of sptulsian.com shared his readings and outlook on the market outlook and specific stocks and sectors.

Anyone knows which other 2 companies he is talking get affected due to pollution control?.

He did not name them in his interview

One is KIRI Industries. Other one I do not know.

Bodal has 3 units out of its 10, operating in Padra, Vadodara. Will try to check how much they contribute to overall capacity.

Dolly Khanna enters Akshsrchem… This is a Huge possitive for a share with small equity base… Does this mean there is still lot of Moat left in Akshar and this is Just the begining?

AksharChem (India) announced that the QIP Committee of the board of directors of the Company has, at its meeting held on 20 July 2017, approved the QIP and allotment of 8,89,690 Equity Shares to eligible qualified institutional buyers at the issue price of Rs. 776.00 per Equity Share, aggregating to approximately Rs. 69,03,99,440/- says Capital Market
Discl: not invested

One concern is that others like Bodal and Bhageria are expanding with
internal accruals buy Aksharchem is diluting stake. They all produce
similar products. Why Akshar needs more shareholder money when its OPM and
NPM are among highest in the industry . Where is the cash flow going…

is anything wrong with chemical sector, i see some cycles in these too as they happen with sugars,
can any one please educate

sector is going very weak since results of one by one

kiri, bodal , akshar, tirumali one after other hitting 52wk lows

did any vinysuphone chinese plants started their work ? or due to geo political affairs ?

exactly 2.45 all checmical stock fell like hell, can a recovery be expected soon ??